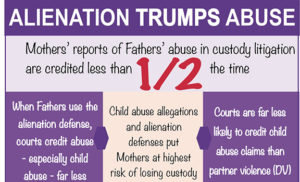 Over the past 40-year history, the Minnesota Coalition for Battered Women (MCBW) has witnessed huge changes in how society thinks about domestic violence but there is still more work to be done, according to its executive director Liz Richards.

There are still plenty of myths to be dispelled.

“While we are proud of our history, the landscape of our work and the movement to end violence is more complex and challenging than ever. The movement to end relationship abuse must be highly iterative and adaptive,” said Richards. “As advocates and survivors, we continuously search for new and innovative ways to end relationship violence in Minnesota and beyond. This is why we are excited to embrace our new identity as Violence Free Minnesota: The Coalition to End Relationship Abuse.”

Fathers getting children more when mothers bring up domestic violence

Richards is proud of the progress her organization has made for women in Minnesota.

“In 1978, if you were experiencing domestic violence, you had few options,” she pointed out. “If you fled, there was no place to go. If you called the police, there was no crime.”

Today, there are shelters, organizations aimed at helping survivors, support groups, and laws that protect those in abusive situations.

Yet, there still remains a disconnect between that progress and family court. “What goes on in family court doesn’t mirror that,” remarked Richards.

“The general presumption is that moms get custody in divorce cases,” observed Richards. While that may be true when you look at all of divorce cases, those where couples can agree on what to do about their kids, it isn’t true when domestic violence is a factor. 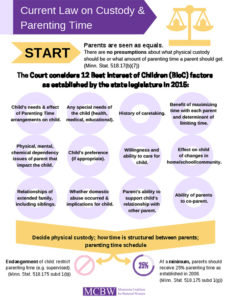 In contested cases, a father is just as likely to get custody as a mother, Richards pointed out, citing Meier’s research.

And what shocks people is what happens when there’s domestic violence.

“If you look at the contested cases with domestic violence against the mother or child abuse by the father against the child, fathers are more likely to gain custody,” said Richards.

The study looked at more than 2,000 custody cases involving child abuse, domestic violence, and parental alienation nationwide. There is no study specific to Minnesota and no state agency that looks specifically at domestic violence, but Richards believes that Minnesota mirrors what has been found at a national level.

“When there are contested cases and domestic violence, fathers are receiving custody more frequently,” stated Richards.

Why is this happening?

That’s not an easy question to answer, but Richards thinks that part of the answer lies in how the family court system has evolved.

She began her career as a family law attorney who worked in Hennepin, Ramsey and Chisago counties befo

re taking a job with the MCBW 10 years ago.

Richards believe that part of the problem is that so many parties are unrepresented by legal council, and lack the knowledge and guidance of an attorney. Part of that is because of high fees for legal services that stretch over years. “You have parties showing up not understanding the system,” observed Richards.

At the same time the caseload of judicial officers has grown tremendously. Ancillary court services have been cut – Hennepin County is the only one in the state that still offers custody evaluations. These were the people who used to be able to spend more time with cases and provide the court with more outside data to determine what was happening within a family.

There’s been a movement within family court to streamline the process. “They keep looking for the thing that will make it better,” Richards said.

One Hennepin County judge began sitting down with both parties within a week or so after they filed for divorce to figure out what they could agree upon, and then set up a process for managing the finances and custody. It worked so well for that one judge that the county and then much of the state instituted it for everyone, giving it the name of Initial Case Management Conference (ICMC), which is followed by the FENE (Financial Early Neutral Evaluation) and the SENE (Social Early Neutral Evaluation). However, things are so backlogged now, it can take months for an ICMC to occur, and longer for the ENEs.

“Now instead of becoming a way to make things smooth, it’s become a roadblock,” observed Richards.

Then there’s the issue with requiring mediation between an abuser and a victim, she pointed out. It doesn’t account for the power imbalance found in abusive relationships.

Plus, it is set up in a way that further abuses the victim.

At an FENE or SENE, each person gets to tell their side of the story without comment from the other – even to correct blatant lies. And each side is paying for their attorney to be there but the attorneys aren’t allowed to speak as there is an attitude that they augment conflict. “The process in and of itself can be very damaging,” said Richards. It is only natural to want to respond when you hear mistruths, but participants have to ignore that.

‘We need a smorgasboard of options’

She doesn’t think there is one magic answer to the problems in family court. “We need a smorgasboard of options,” Richards said.

In some cases, the domestic violence that occurred isn’t relevant to a financial division or custody. It could have been an isolated incident that occurred at the end of the relationship when it was most stressful. But in other situations, the domestic violence played out for years through coercive control, financial manipulation, and psychological, sexual and physical abuse of one partner by the other. Sometimes there was direct physical and sexual abuse of the children, and other times emotional and psychological.

Richards believes the system needs to ask about domestic violence immediately, gather information on it, consider the context, and factor it in. “Who is doing what to whom, with what impact?”

That should be followed up with this question in custody cases: “What is the impact and effect on children?”

The Battered Women’s Justice Project in Minneapolis has created a system focused on this, pointed out Richards. Termed the SaFER Approach, staff are working to educate family court professionals across the country.

Kids affected when moms are abused

“We know there is a high correlation between those that engage in domestic violence and child abuse,” observed Richards.

Plus, research has shown that domestic violence in a home affects the children who live there, whether or not they are physically hurt.

“What we know about resiliency of children is definitely linked to support of the non-abusive parent,” said Richards.

Unfortunately, she doesn’t think the system in place is set up to adequately account for that.

‘It takes two’ is a myth

There is the idea in family court that there are two equal parties in a divorce. “The mantra is that it takes two,” observed Richards, and that both parties are engaged in conflict. These are then termed “high conflict” cases.

That doesn’t factor in the reality of domestic violence. Where there’s intimate partner violence, one person is exerting power and control over the other and is engaged in manipulating the system. “If you have a father who has been engaged in coercive control, they’re highly skilled in using these same tactics in the family court system,” said Richards.

For example, the abusive party may sets things up to make the other parent look inflexible when they’re trying to keep things consistent for the kids. The abusive parent works to create chaos by trying to change the schedule, not show up, or move the pick-up location.

“What is the other party supposed to do?” asked Richards. “It is assumed that both parties have the best interests of the children at heart. In a situation with domestic violence, one is trying to use the children as a tool for the manipulation. It’s just a set up.”

Richards said, “If you have one parent who is working to abuse and manipulate, what does it mean for the other parent to go along?”

The domestic violence organizations in the state are primarily shelter-based, and they’re dealing with the emergency shelter needs of their clients. There aren’t any that have the resources to also manage what happens after the emergency when the victim is in family court fighting an abuser.

“Some of these cases stretch on for years,” observed Richards. “This is a problem across the country.”

She believes that Minnesota’s 12 best interest factors in statute 518.17 used in determining custody arrangements are supposed to place the focus upon kids. But Richards acknowledges, “There is a breakdown in what the law says and how it gets implemented in court.”

Does a child need a parent who is not safe?

What is best for children is to have two safe parents, stressed Richards. “But if it’s not safe parenting that’s happening, it’s not in the child’s best interest.”

She doesn’t believe that the standard should be equal access to both parents, and doesn’t support any change in state law that would make 50/50 parenting the base assumption.

“I think safe parenting has to be the standard,” Richards said.

Some argue that women make false claims of abuse to get their way in divorce cases. “I have yet to see one person claim domestic violence and it made their life better,” said Richards. “Most people who talk about domestic violence do because it’s happening in their lives.”

But this idea, like many others that show up in family court, are not driven by evidence. They’re driven by emotion, according to Richards. They’re myths that society has adopted as true.

“It plays out in people’s lives and it’s devastating,” she said.

Contact editor at tesha@MonitorSaintPaul.com. Read more articles in this series at http://monitorsaintpaul.com/category/voices-against-violence/

"HIGH CONFLICT" – To the court, “high conflict” can refer to cases that just won’t settle. To many mediators, it can mean that parties are unable to communicate effectively. To custody evaluators, it can refer to anything from frequent disagreements to severe, long-term domestic violence. Labeling a case as “high conflict” can often distract from what is actually going on, according to the Battered Women's Justice Project. It can also disguise things as “high conflict” that are not conflict at all, like intimate partner abuse, child abuse, and child sexual abuse.

CONTESTED CASE – When parents can’t agree on custody and parenting time arrangements, it becomes a contested case and the court is involved in making the decisions.

"Alienation" – Sometimes called "parental alienation syndrome," this theory has been rejected by the psychological definition book, the DSM-V, as it lacks any scientific basis. However, it is still being used in the family court system. Often used to limit protective mothers to supervised or no visitation, it assumes that problems in a relationship between an allegedly abusive father and the children must be caused by alienation. The most common context of alienation claims is that fathers accused of abuse counter with claims of alienation.

ICMC – The ICMC is the first appearance in Family Court. It is supposed to happen about 3 to 4 weeks after a filing for divorce.

FENE – A Financial Early Neutral Evaluation (FENE) is part of the Alternative Dispute Resolution process in Minnesota divorce cases. An FENE involves a half-day session (or more) with a court-appointed neutral. This neutral is typically an experienced family law attorney, or a CPA familiar with the financial issues.

SENE – A Social Early Neutral Evaluation is a voluntary process parents may choose to participate in when they disagree about custody or parenting issues. Typically the SENE will involve both parties, both attorneys, and two court-appointed custody evaluators (one male and one female). During the session, each party (and his or her attorney) is given the opportunity to explain what they would like for a custody and parenting time arrangement, and why.