Will Midway Center be demolished?

City’s first step preserves use of TIF for redevelopment 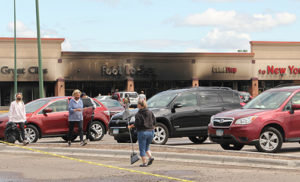 Tenants at the Midway Center, damaged by fire and vandalism on May 28, are being forced to move out. Their leases have been revoked effective July 17, 2020, but it is unclear what will happen to the building. Over 170 businesses were damaged in the Midway following the murder of George Floyd. (Photo by Tesha M. Christensen)

Before fire-damaged building at Midway Center can be demolished, steps must be taken to preserve possible use of tax increment financing (TIF) for redevelopment. The St. Paul City Council, acting June 24 as the Housing and Redevelopment Authority (HRA) Board, got that effort rolling with two actions.

The HRA approved a demolition and development agreement with Snelling-Midway Redevelopment, LLC, the partnership involved in redeveloping the superblock bounded by Pascal St. and St. Anthony, Snelling and University avenues. Midway Center owner Rick Birdoff and Bill McGuire, who has led Minnesota United FC’s efforts to get Allianz Field built on the southwest part of the property, are the development partners. The soccer team starts its second season in Midway this month.

When the TIF request would come forward isn’t known. City officials this summer are already waiting for the developers to request amendments to the redevelopment master plan. Any plan amendments will go to the St. Paul Planning Commission for review and a recommendation, and then to the city council for final action.

The superblock is governed by a master plan that won city council approval few years ago. It calls for a mix of uses including commercial/office, hotel space and housing. The plan was developed with input from a community/St. Paul Planning Commission task force.

McGuire met earlier this year with Union Park District Council to discuss mixed-use development in the form of two buildings west of the soccer stadium. He also described how plans for a movie theater likely won’t occur, but that a hotel and housing are still in the mix.

Metropolitan Council June awarded the United Village Midway Block B $125,000 for cleanup on a 2.4-acre site that is currently a surface parking lot. Plans call for 234 market-rate apartments and 15,500 square feet of commercial space over structured parking.

But how those plans for redevelopment are affected by the fire damage isn’t clear. One finding required under state TIF law is that structures be deemed “substandard” before a district can be implemented.

The HRA on June 24 also made certain findings, including the determination that the Big Top Liquors and Midway Center structures are substandard. The liquor store located in the former Perkins restaurant building at 1544 University Ave. and the northeast section of the shopping center at University and Pascal were extensively damaged during the unrest after George Floyd’s death in May.

TIF is a mean of public financing that is used to pay for redevelopment costs including infrastructure, demolition and other development-related costs. Cities divert future property tax revenues that would be gained through redevelopment back into specific project costs. TIF districts can only be in place for a set number of years. It is controversial because it takes away potential property taxes for other local units of government. But in the face of fewer development tools, TIF is one of the remaining options.

TIF for Midway Center redevelopment has sparked controversy among city council members in the past, but the June 24 actions passed unanimously. Council members Dai Thao and Mitra Jalai spoke to the need for redevelopment, and community members’ eagerness to see something happen.

Interim St. Paul Planning and Economic Development (PED) Director Kristin Guild emphasized that the actions taken June 24 simply preserve the option to use TIF in the redevelopment project. It’s not a commitment that the financing tool will be used. If the developers choose to use TIF, a separate application would be brought before the HRA and city council.

Nor is it even a commitment to demolish or restore the structures, Guild said. As of late June demolition permits for the properties hadn’t been pulled. The sites are fenced off.

“The Big Top Liquor building is really severely damaged,” Guild said. So too is Midway Center, with the worst damage centered on the former Foot Locker store. Fire, smoke and water damage spread to adjacent stores

In September 2017, the HRA made findings to qualify parcels within the Snelling Midway development site as a “renewal and renovation TIF district.” That allowed for demolition of the first structures to move ahead and make way for the stadium and its nearby green space and parking. The longtime Big Top building on Snelling between Shields Ave. and Spruce Tree Dr., the former American Bank building at Snelling and University, and the western portion of Midway Center that included Cub Foods, Midway Pro Bowl and other businesses came down.

But the damage in June to Big Top and the rest of the shopping center meant that a new analysis and new findings should be prepared, Guild said.