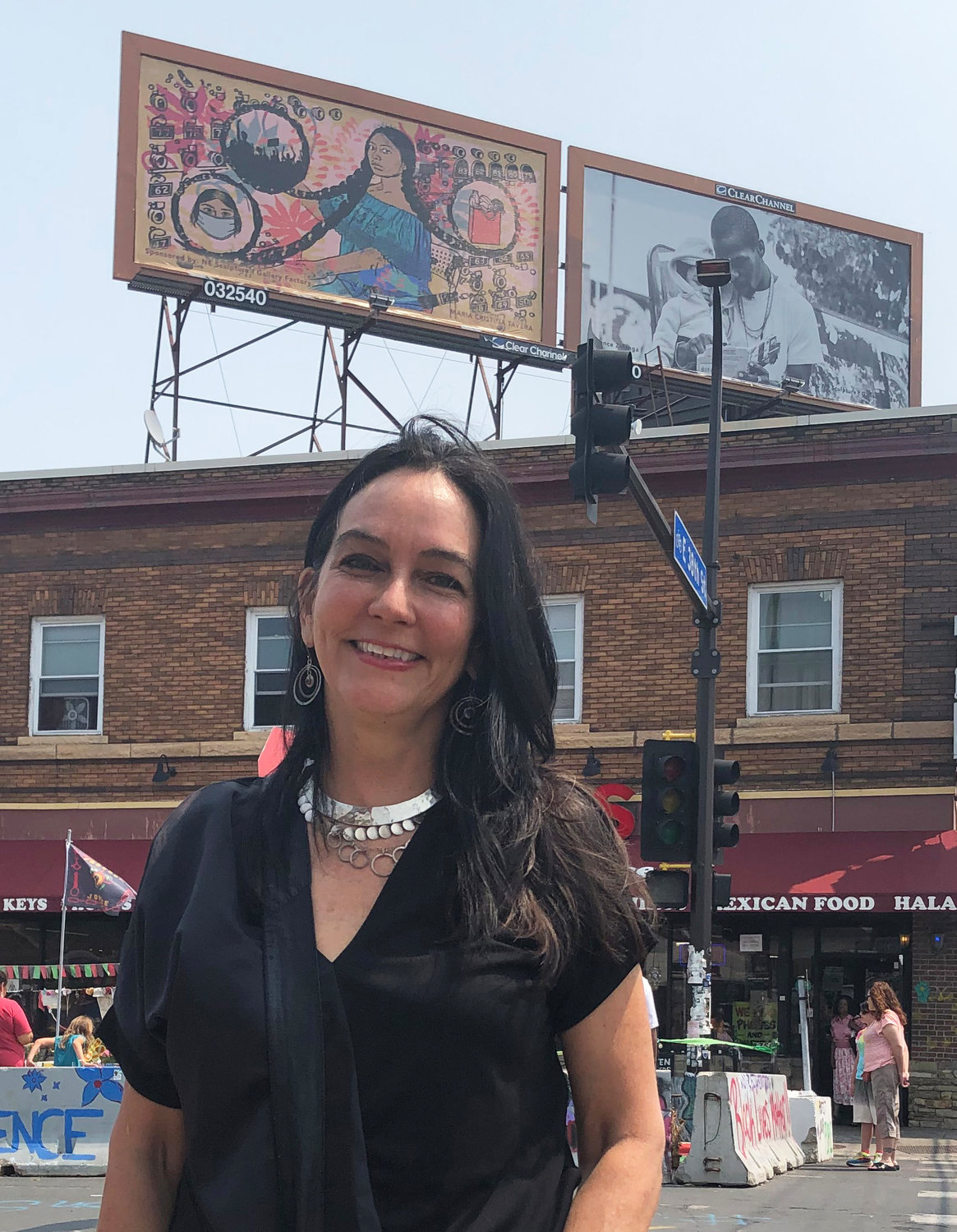 Tina Tavera stands with her billboard “La Conneccion” on the Cup Foods rooftop behind her. (Photo by Jill Boogren) 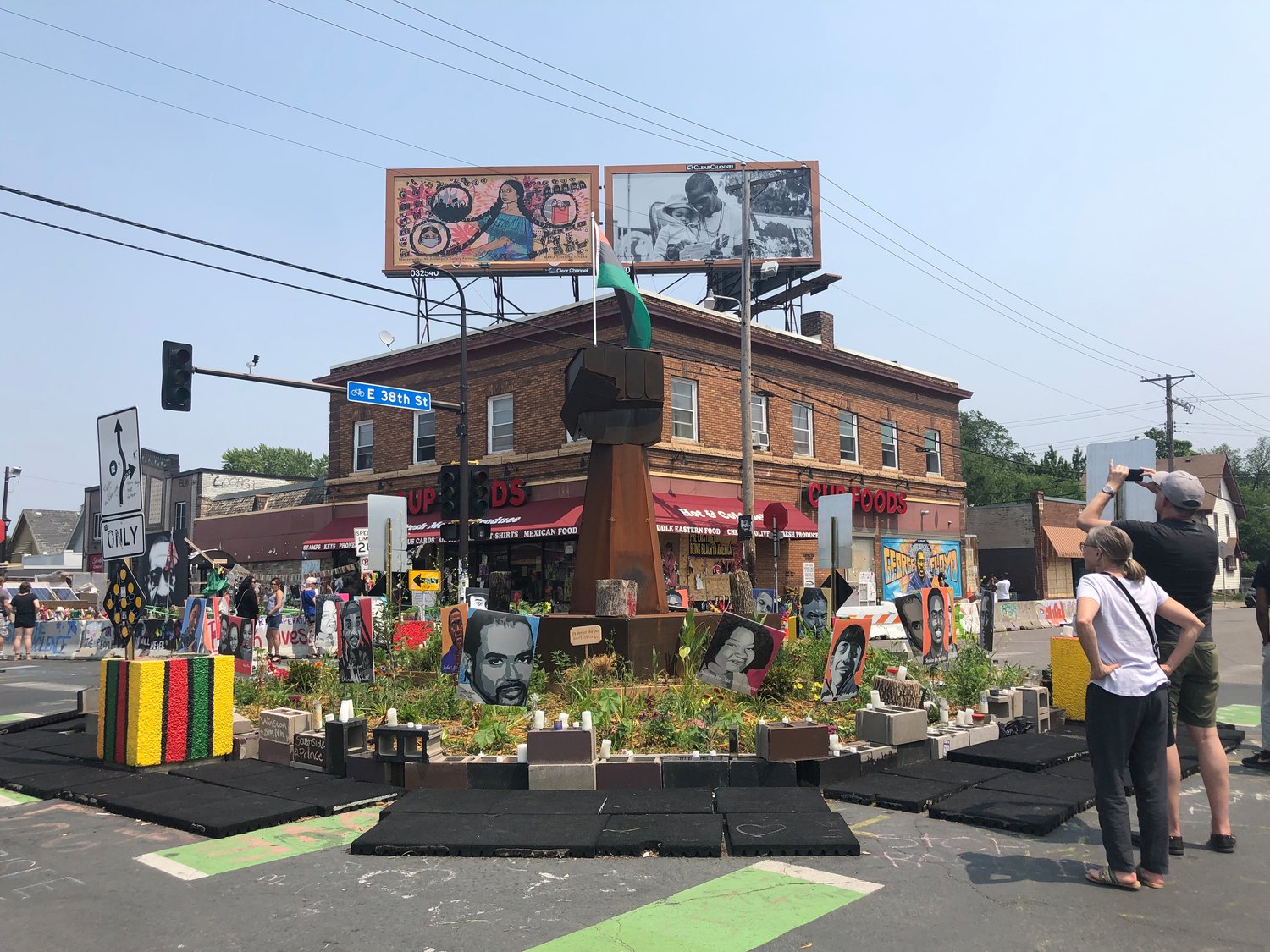 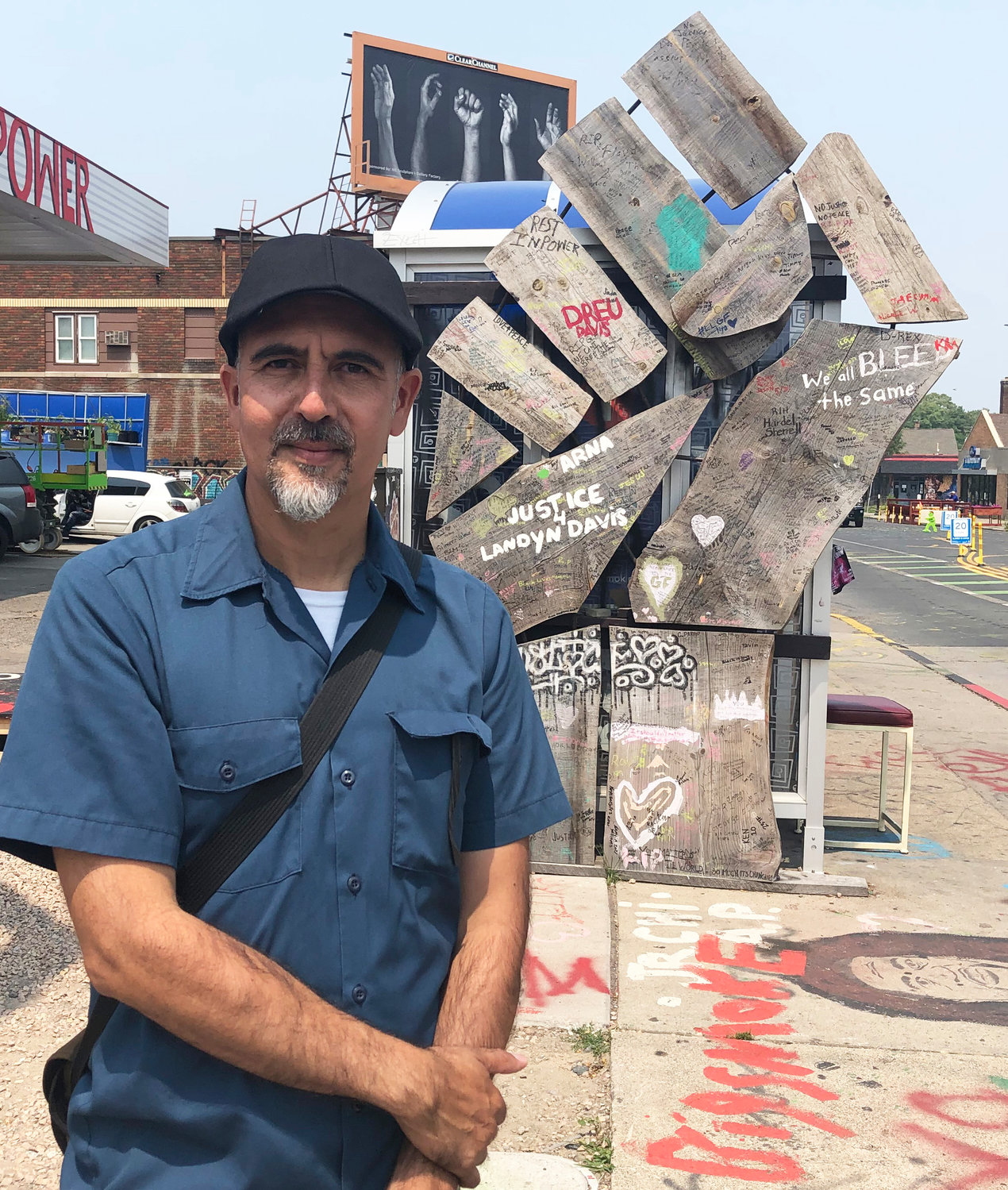 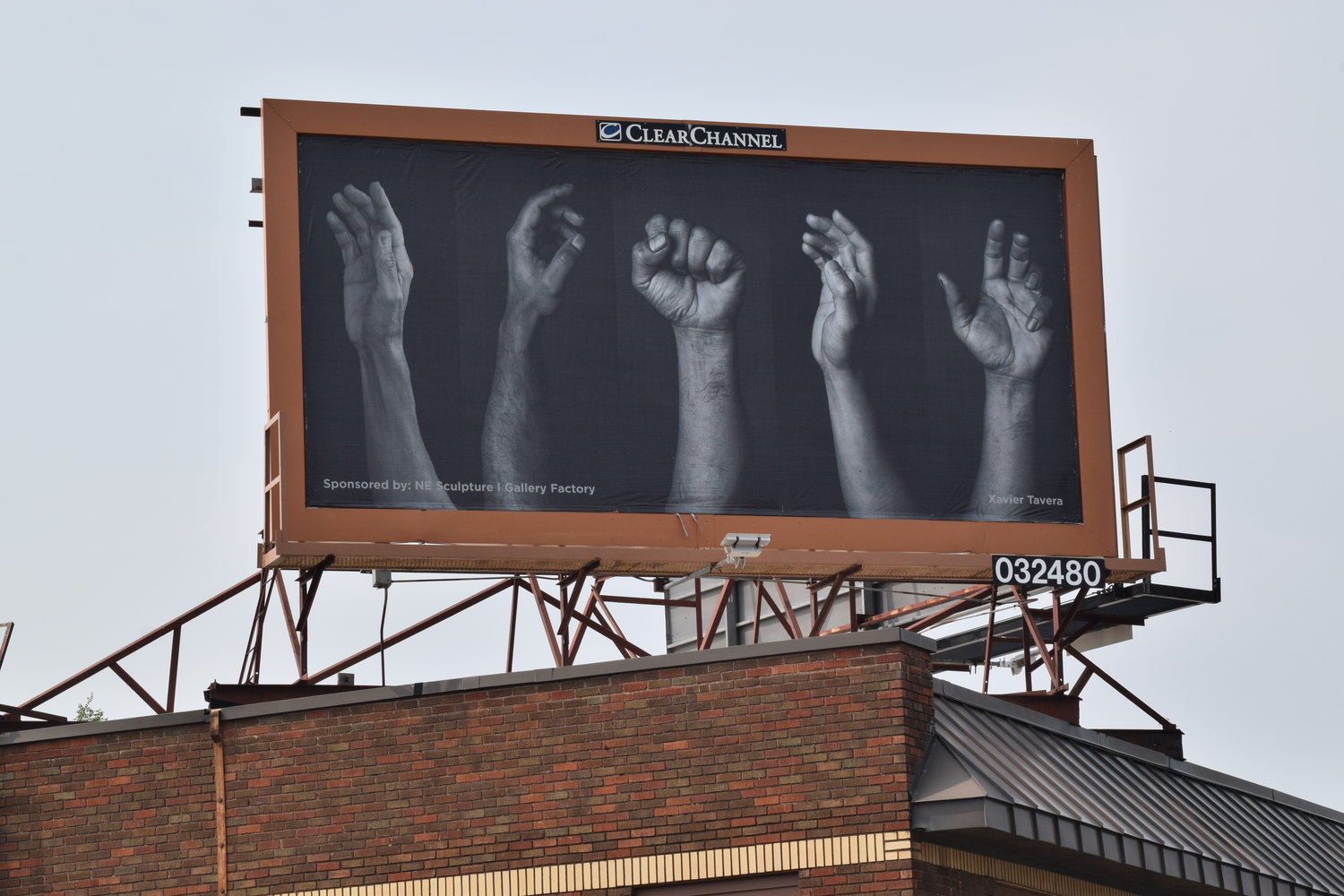 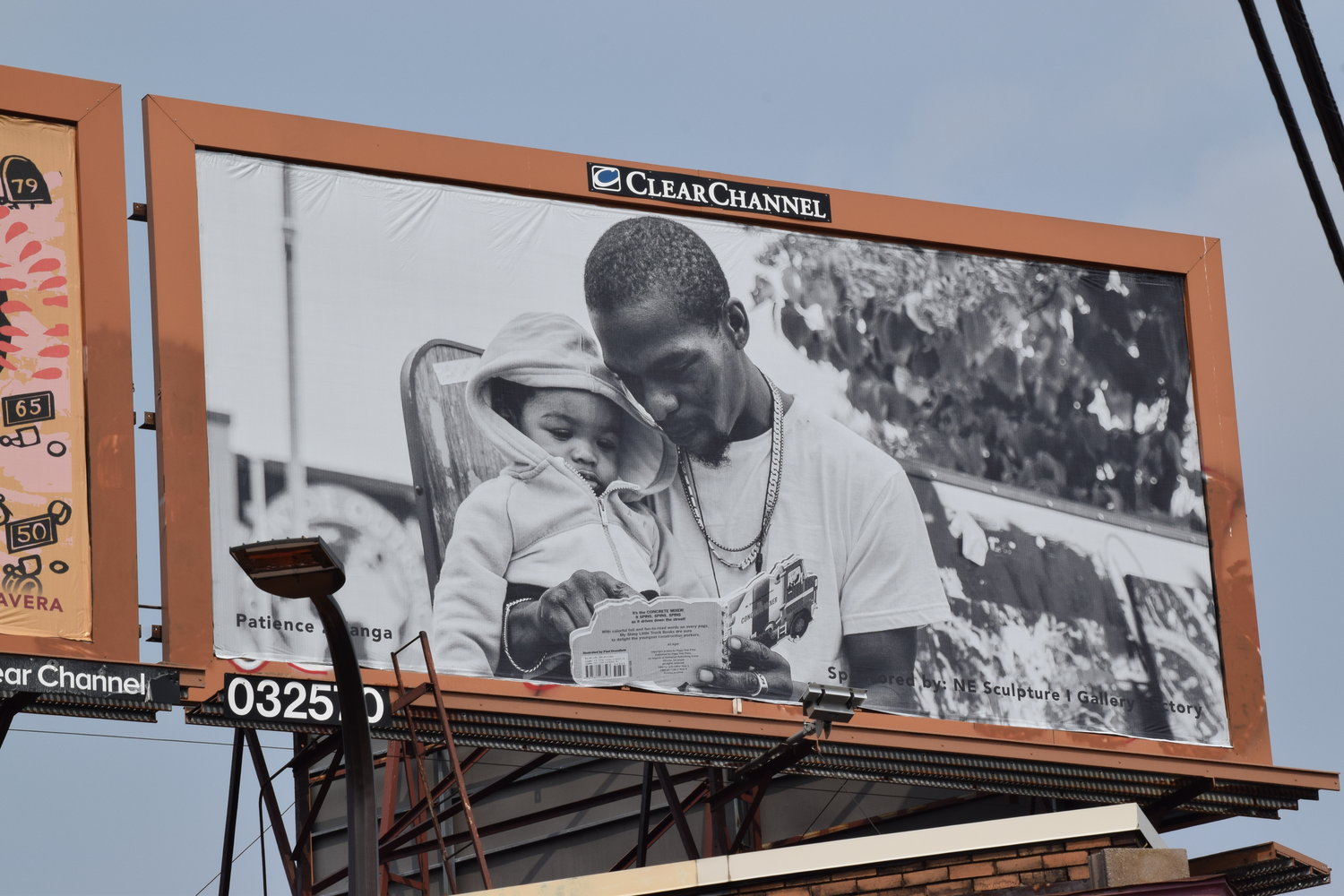 Photographer Patience Zalanga's billboard is of a moment she captured of a father reading to his son on a bench at George Floyd Square, a book he chose from the community's free library.(Photo by Jill Boogren) 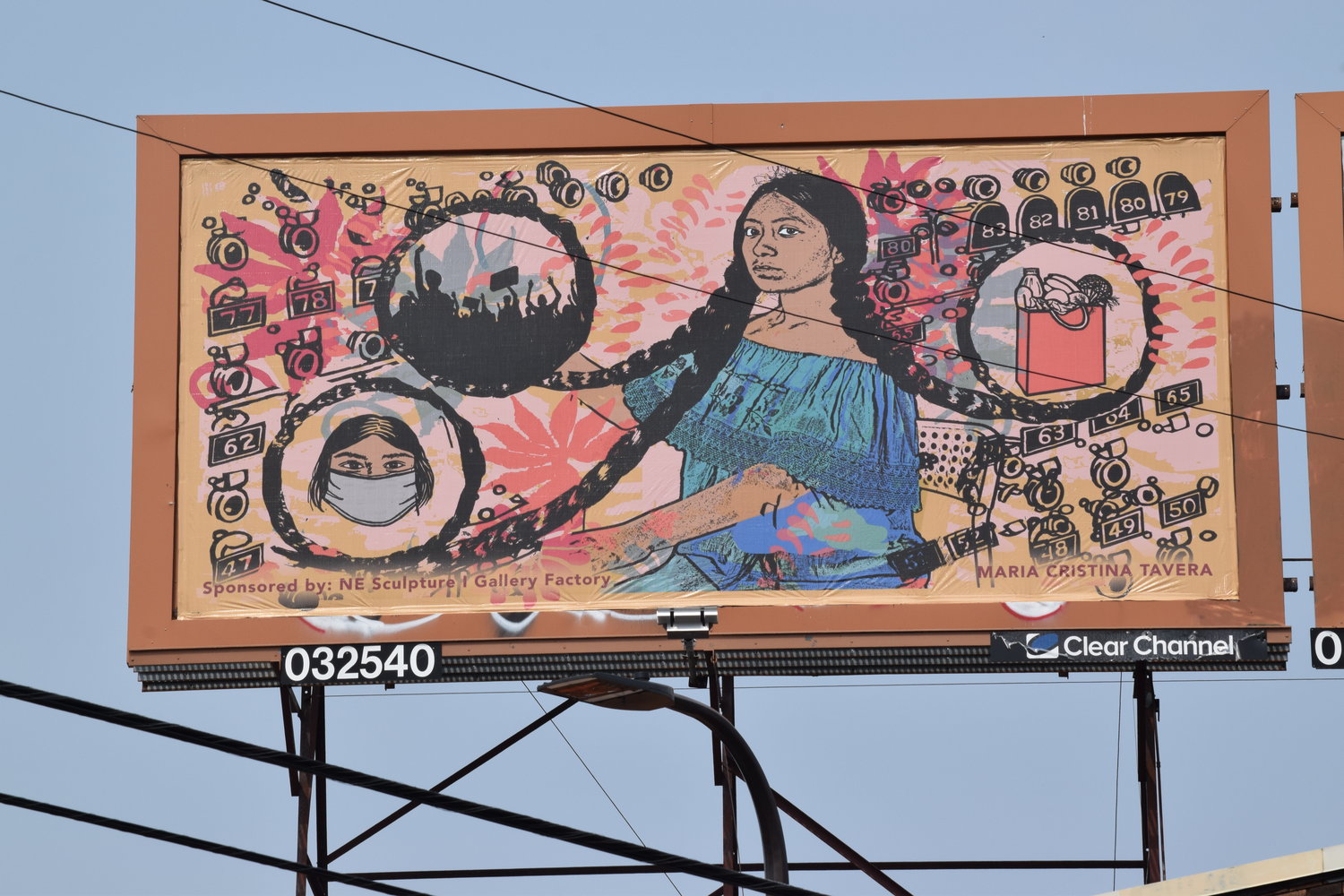 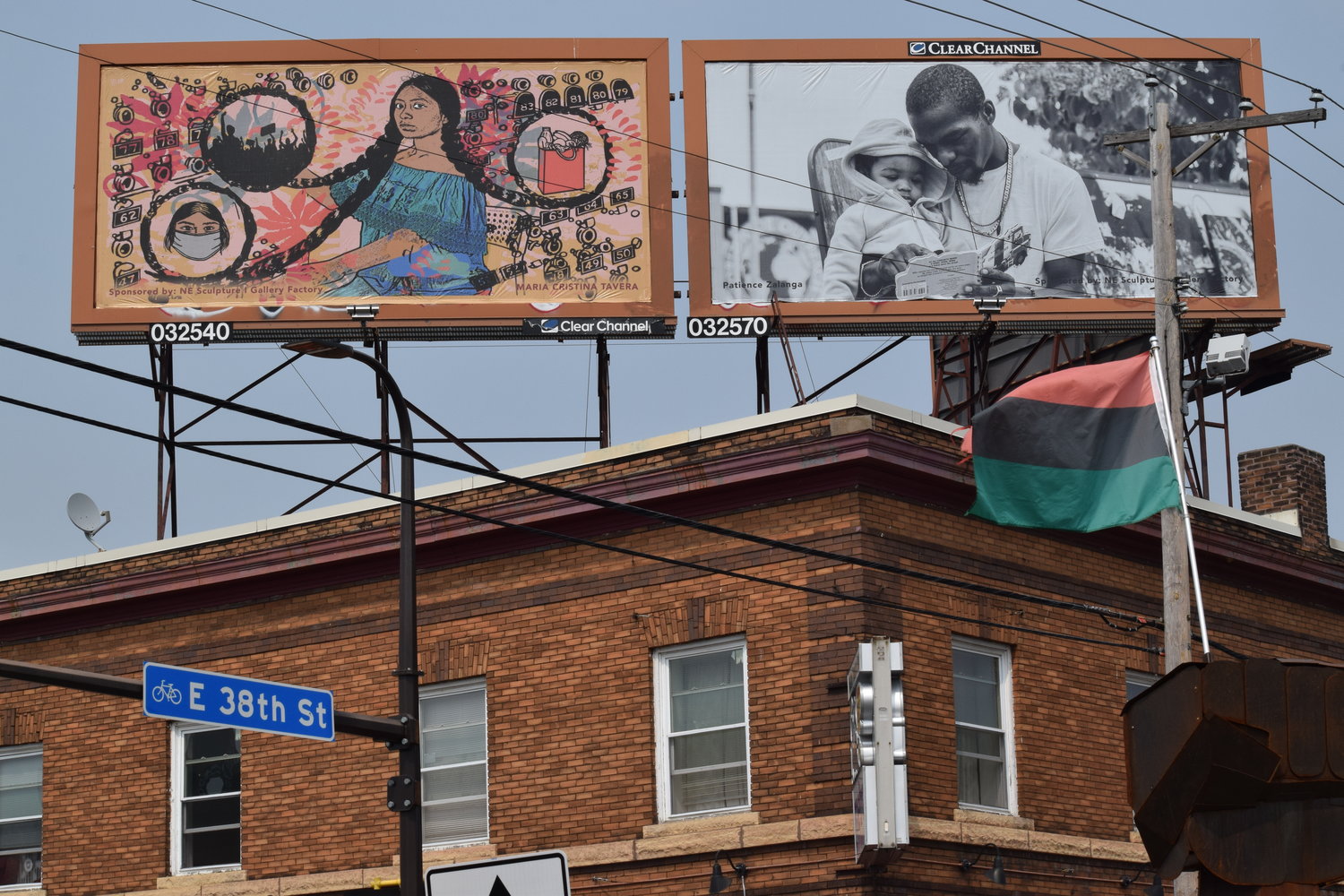 Two of the Social Justice Billboard Project billboards as seen from the opposite corner at George Floyd Square. (Photo by Jill Boogren)
Previous Next
Posted Thursday, August 12, 2021 8:18 pm
By JILL BOOGREN

Two new artist-created billboards are up on the rooftops at George Floyd Square.
Part of the Social Justice Billboard Project, “La Conneccion,” by Maria Cristina “Tina” Tavera, and an untitled work by Patience Zalanga now sit side by side atop Cup Foods at 38th and Chicago.

‘La Conneccion’
La Conneccion features an image of an Indigenous woman (Mexica dancer Atquetzali Quiroz of East St. Paul posed for it) whose braids wrap around three separate images – a bag of groceries, a person wearing a face mask and a crowd of people in silhouette, their hands and a sign raised. The braids connect to a numbered switchboard, from the early days of telephone operators, which to artist Tina Tavera represent the connections the community made to push through the violence and unrest that happened after George Floyd was killed last year. As organizers continued to lead protests and people navigated health and safety concerns with COVID, food shelves were created and mutual aid flourished.
“It’s celebrating how we were able to move forward by working together in the different communities,” said Tavera, offering as examples Sanford Middle School, which saw an outpour of food donations during the uprising, and El Colegio, which opened a free grocery store. Tavera lives on 38th St., a few blocks from the Square in the Powderhorn neighborhood. Asked what it meant to have her work featured in the space, she said having different artists share their work here was likewise symbolic of the different communities coming together.
“Just to be a part of this moment historically is incredibly significant,” she said.

‘Untitled’
The billboard next to this, “Untitled,” is a black and white photograph of a Black man sitting on a bench, reading to a small child who is sitting in his lap. The photograph was taken in George Floyd Square when the people’s library was housed inside a bus shelter (it has since been moved into its own small building, the “Book Shelf,” in the Peoples’ Way). According to artist Patience Zalanga, the child is the man’s son, and he chose the book they were reading. Zalanga saw this moment when she was on her way out of the Square in September.
“These are the beautiful and quiet moments that happen at the Square,” said Zalanga. She believes the image challenges the ideas that people outside of the Twin Cities and outside of Minnesota have of George Floyd Square.
“Ultimately I want this image to be a reminder to Black people, to ourselves, of who we are, the power of relationship to each other,” said Zalanga. “And I wanted this image to remind us of who we are, given the dehumanizing stereotypes that we have to navigate on a daily basis and this idea that Black fathers are not engaged, Black parents are not engaged in their children’s learning and their children’s growth.”
Seeing the picture in such a large format is a little shocking for Zalanga, but she also feels its size is appropriate for what it meant to be a witness to that particular moment in time.
“The size of it is equal to just how significant and powerful that moment was for me. And so it’s really humbling to be a part of the space in this way,” she said. “My hope is that when people see it, they are also able to see themselves in that image, too.”
Zalanga sees the role of artists as an important part of helping inform the public, process current events, and make sense of the different layers and systems people are trying to change to create a safer, more just world. As a photographer who for the last six years has focused on covering social movements and Uprisings in the United States, she takes her role during this historic period seriously.
“Within the context of what the city has experienced in the last year, and continues to grapple with, I think that engaging and documenting our communities is so important,” said Zalanga. “My work is here to inform people of what is currently happening in our communities, but I also want my work to be information that the future can gather about what this time was for us.”

Message of equity
Billboards by 11 artists, from Minneapolis and around the country, have been installed at the Square since the project launched in July 2020. Initiated by NE Sculpture I Gallery Factory in response to the murder of George Floyd, the idea for the project came as gallery director John Hock was helping place Peyton Scott Russell’s large portrait of George Floyd, “Icon of a Revolution,” in the Square in the days following Mr. Floyd’s death.
“At the time I looked up and saw these billboards, and that’s what inspired the idea of it,” said Hock.
He set up a crowdfunding platform, and the Social Justice Billboard Project (SJBP) was born. The aim was to elevate BIPOC voices and artwork by renting the three billboards that face inward, toward the center of the Square. Entirely community funded, the first phase of the project ran from July 2020 through March 2021. According to Hock, funding provided by the National Academy of Design/Edwin Austin Abbey Memorial Trust Fund for Mural Painting, NYC, means the project will continue for at least another year.
“We want to keep the quality up and the intensity up. It’s all about the message of the Square,” said Hock. That message? “Equity.”

‘We’re all in this together’
A third SJBP billboard, “Unified,” was installed across the street in April. The piece features black and white photographs of five separate raised hands, each treated by artist Xavier Tavera as a portrait.
“The whole point is to build a vocabulary for power, for peace, for caring, for healing with the gestures that the hands are doing,” said Tavera. “This piece is a lot about unite… because we all have something in common. That in this very divisible time it’s important to push more than the ‘I am and you’re not’ and ‘Who are you.’ It’s ‘We’re all in this together, and we should make an effort to communicate with each other.’”
The anonymity of the people behind the hands helps do that, Tavera believes. And though the hands are those of a diverse group of people - Black, Indigenous, Asian, Chicana and Mexican - in black and white, they’re several tones of grey.
“There’s a little bit of hint of race, but it’s the unification of this language that I’m trying to do,” said Tavera. “And I think it could be something powerful, it can be something that brings people together.”
As to being in this space at this time, Tavera called it a historical place - the killing of George Floyd changed the place, the neighborhood, the state, the country and farther.
“So there’s an enormous amount of responsibility,” he said. “And with that sense of responsibility, we are displaying something that we think can have a resonance with other people.”
For more information on the Social Justice Billboard Project, visit ne-sculpture.org/billboard-project. Find the artists on social media @tina.tavera, @patiencezalanga and @taveraxavier.