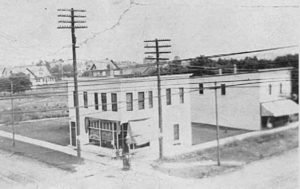 Ron Johnson was working at Target when he heard Lloyd’s Pharmacy was for sale in 1974.

He headed to the longtime pharmacy at Snelling and Minnehaha to meet Lloyd Jensen, the 25-year owner.

“He was one of the nicest people I’d ever met,” recalled Johnson, who is 74 years old now. “Thoughtful.” It didn’t take Johnson long to decide to buy the business.

Johnson sought to be a good asset to the neighborhood as Lloyd had, and Florian Ritschel had before him. 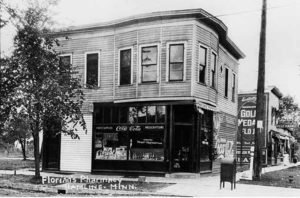 The son of German immigrants opened Florian’s Pharmacy in 1918 after purchasing the building at 720 Snelling in Hamline, Minn. It had been built in 1914 and previously housed a millinery shop. “He was the kind of guy who ran a lot of different promotions,” recalled Johnson.

Lloyd purchased the pharmacy in 1949, renaming it.

When Johnson bought it, he never thought of changing the name. Everyone knew Lloyd and respected him.

Johnson worked to keep the store as Lloyd had, greeting all of his customers by name. “There’s a huge difference between the business at Target and Lloyd’s,” observed Johnson. “Lloyd’s customers are really special people.”

Although Johnson grew to own six pharmacies in St. Paul, Rochester, and Arden Hills (where he lived), he always worked out of the Lloyd’s location. For a time, Lloyd continued to live in the apartment above the store, coming down to chat with former customers. Florian dropped by, too. 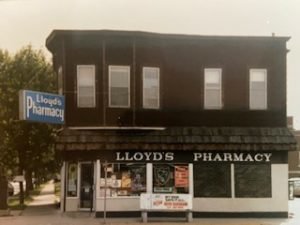 Johnson started as the pharmacist at the store with one other staff member, and his wife helped out on the weekends when she wasn’t working as a school speech therapist.

At one time, there were about 10 independent pharmacies along Snelling, Johnson pointed out, and hundreds in St. Paul. Today, there are very few, and Lloyd’s is one of the only still compounding medications there on site.

It was important to him to keep it as an independent pharmacy.

“Lloyd’s Pharmacy has been a great part of the community, and I’d like to see it stay that way,” said Johnson. He sold the pharmacy in 2014 to his head pharmacist, Jim Stage.

One of his former staff members called Johnson on Thursday, May 28, 2020 to let him know the store had been looted. He discovered the next morning that it had also been set on fire and burned to the ground. 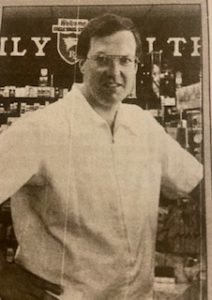 In his grief, he held onto what his son said to him. “‘The lumber, the wood is gone, but you still have the memories.’ That was an important time in my life,” said Johnson about the 40 years he spent at the pharmacy.