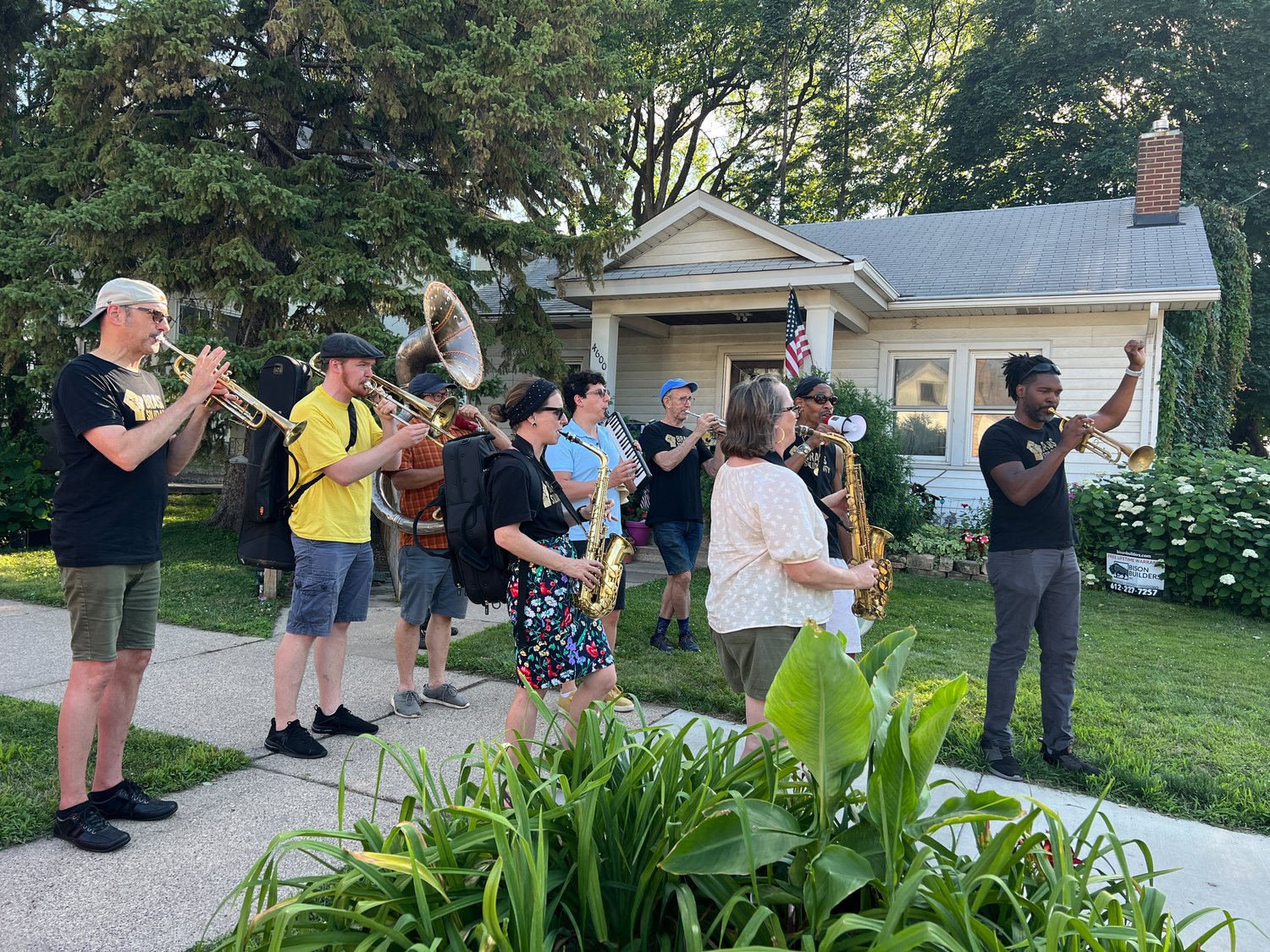 On July 11, Brass Solidarity plays a few tunes in front of the Arthur and Edith Lee house at 4600 Columbus where an angry mob gathered in 1931 to force the family out. (Photos by Jill Boogren) 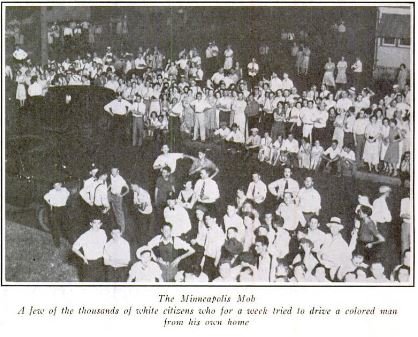 A few thousand White citizens tried to drive the Arthur and Edith Lee family from their home for a week. This photo was featured in the October 1931 edition of "The Crisis" magazine. 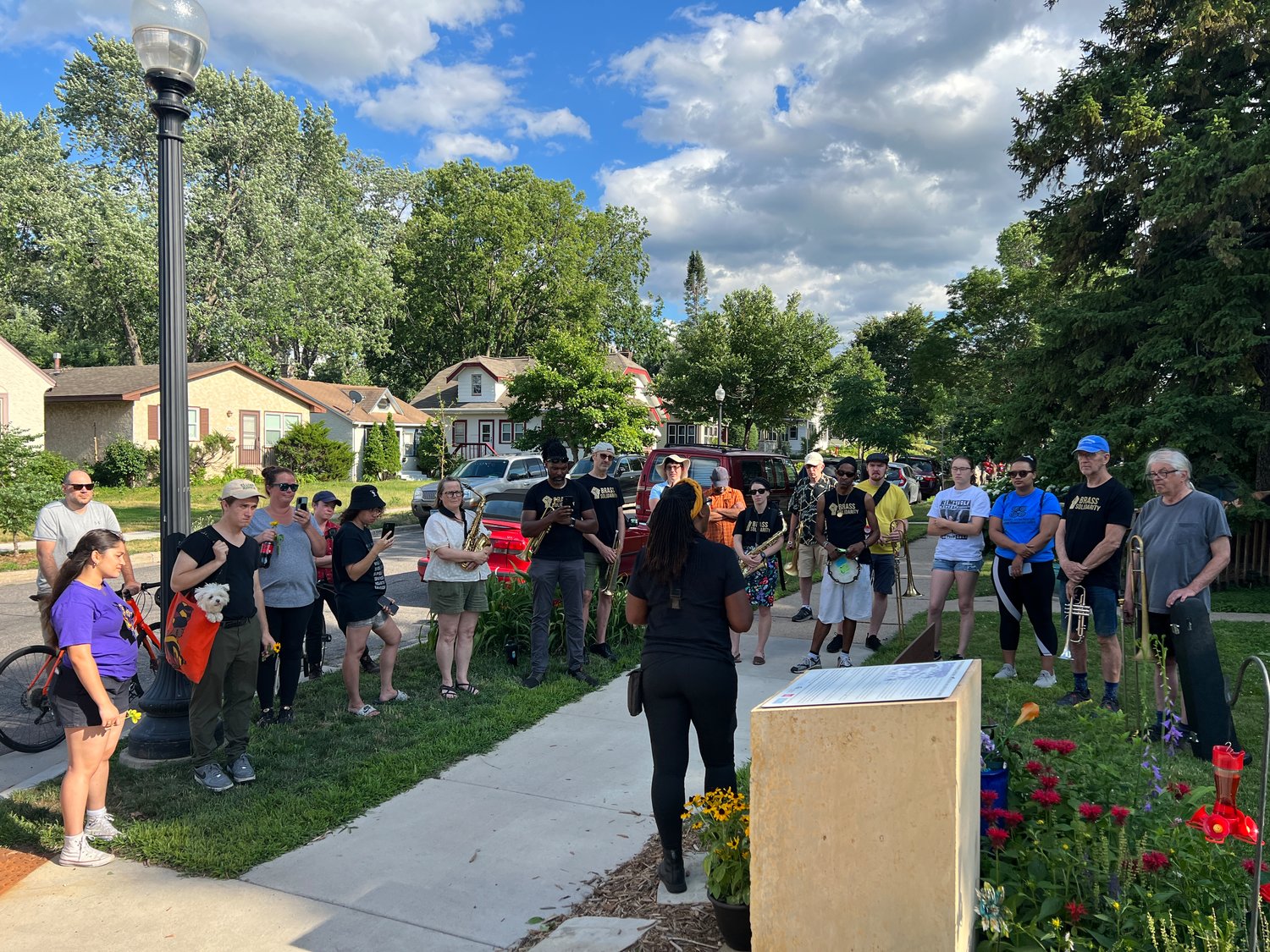 Marcia Howard shares the history of the Arthur and Edith Lee house at 4600 Columbus. The group assembled here today is nothing like the angry white mob that gathered here in 1931. 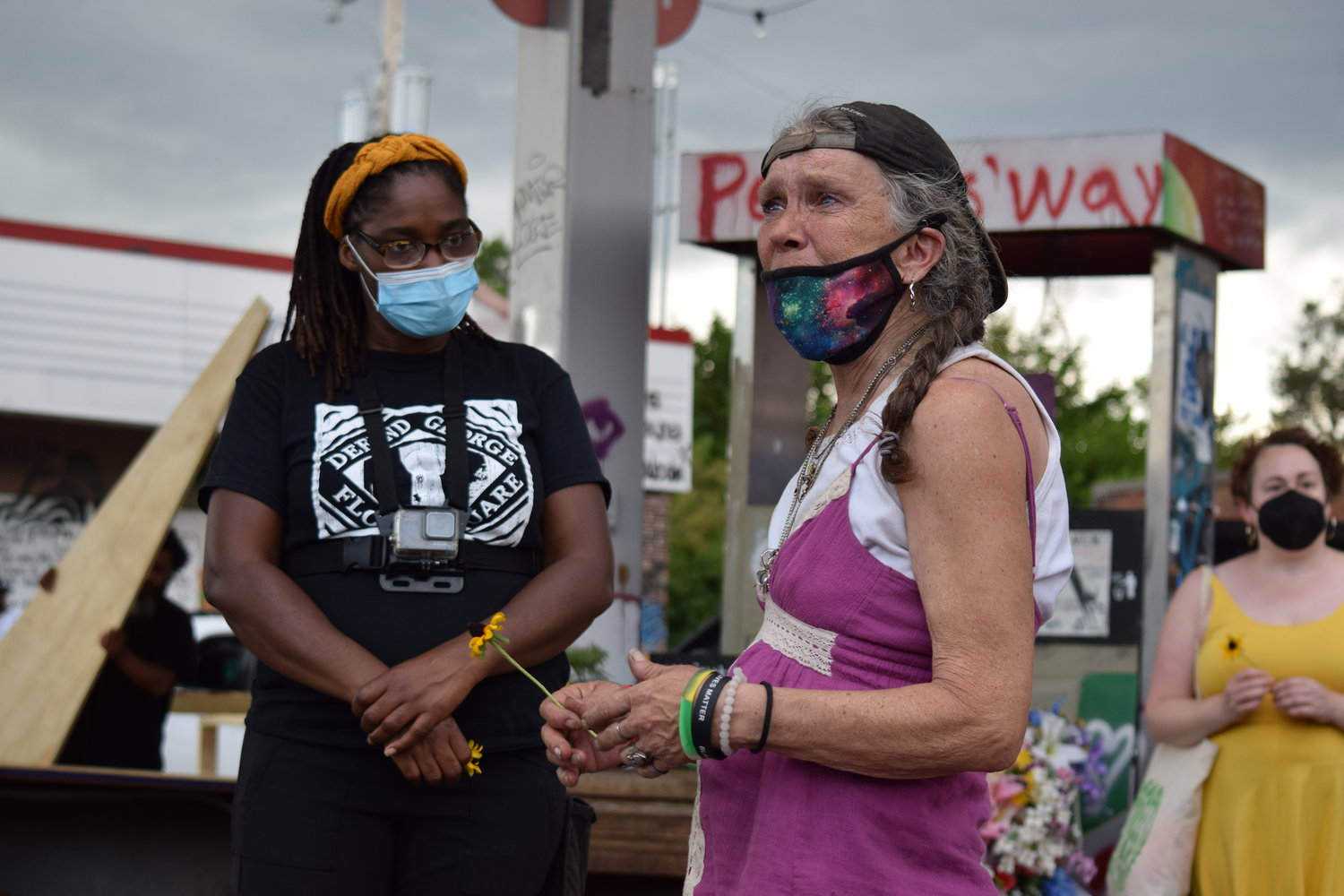 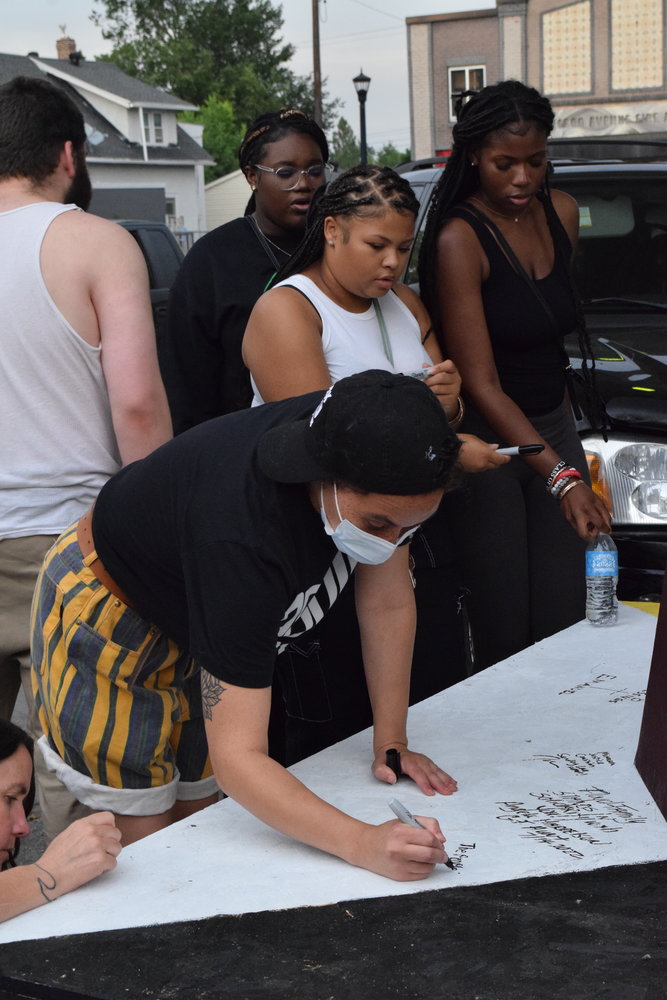 Community members sign the base of the fist.
Jill Boogren 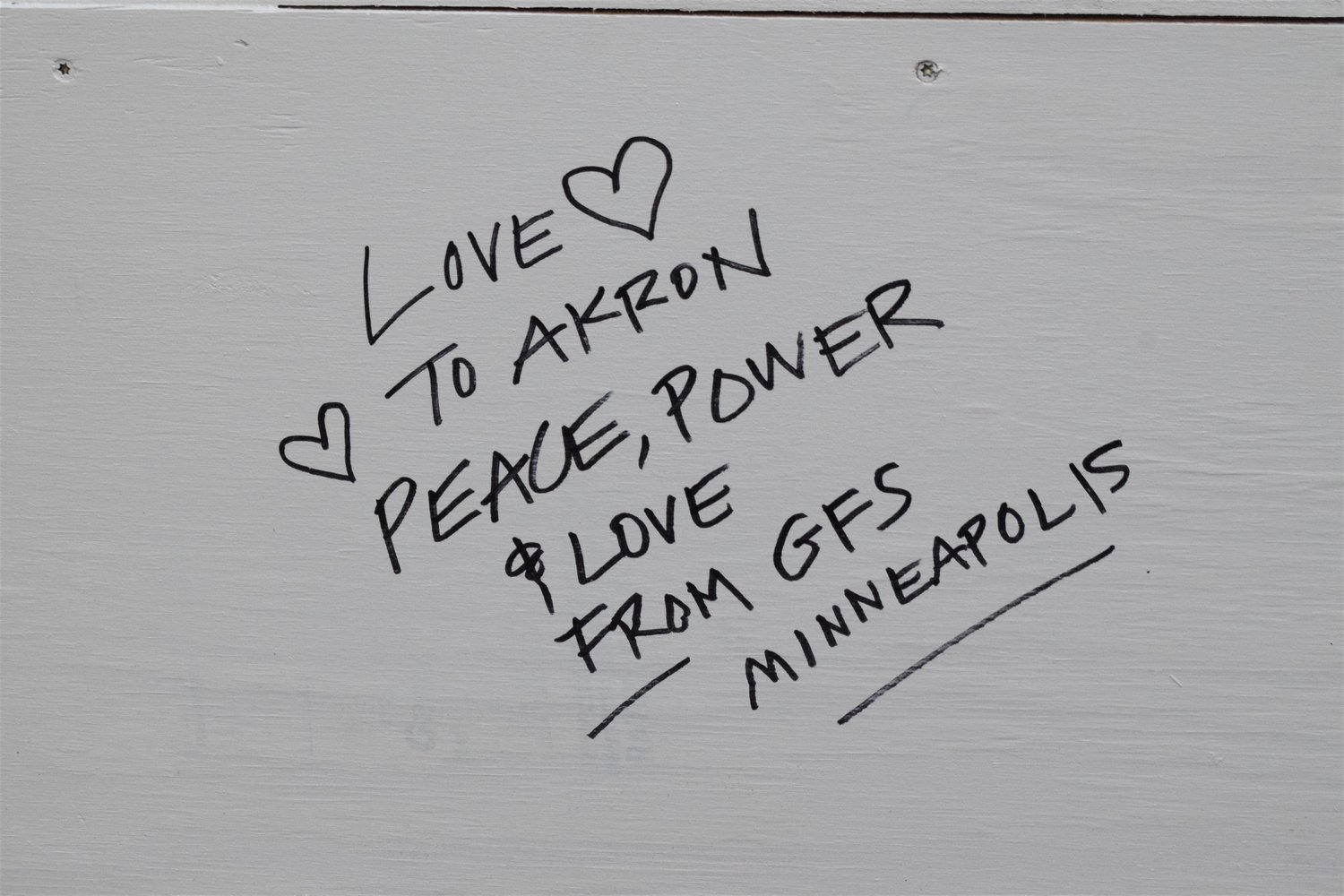 An expression of love and support from GFS.
Jill Boogren 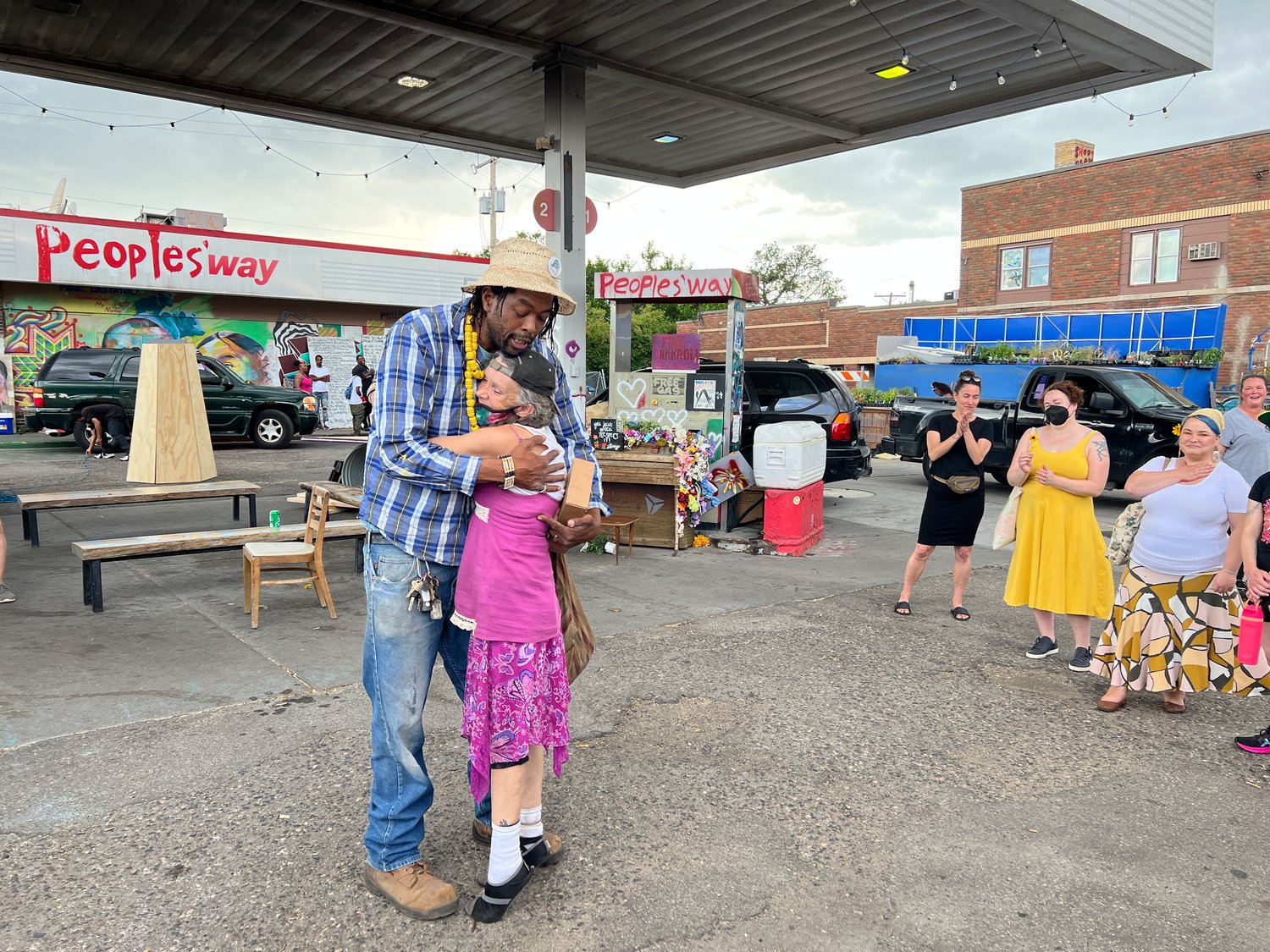 Jay the Gardener (left) and Carla Jo “CJ” Bielawski embrace as he holds a box of Black-eyed Susan seeds that have been passed along from the original garden tended by the Lees. 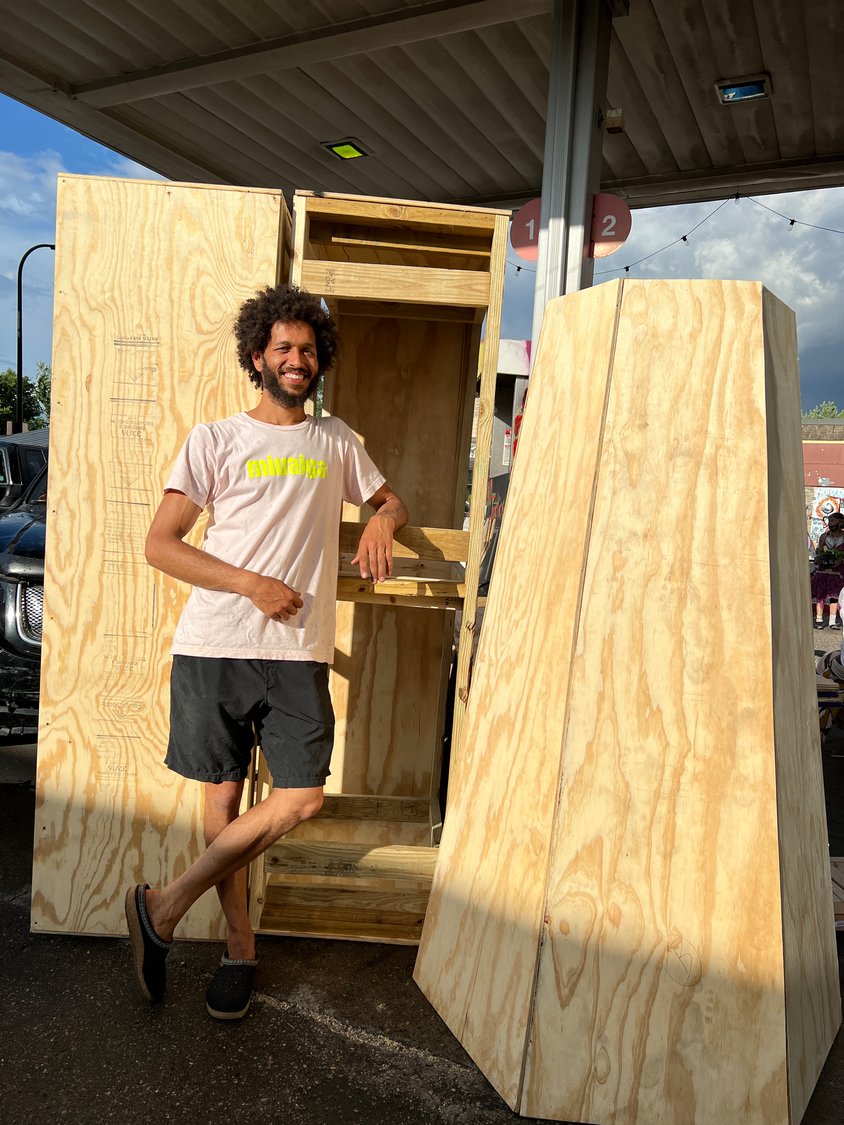 jordan powell karis stands in front of the wooden components of the new fist sculpture he is constructing for Akron, Ohio. 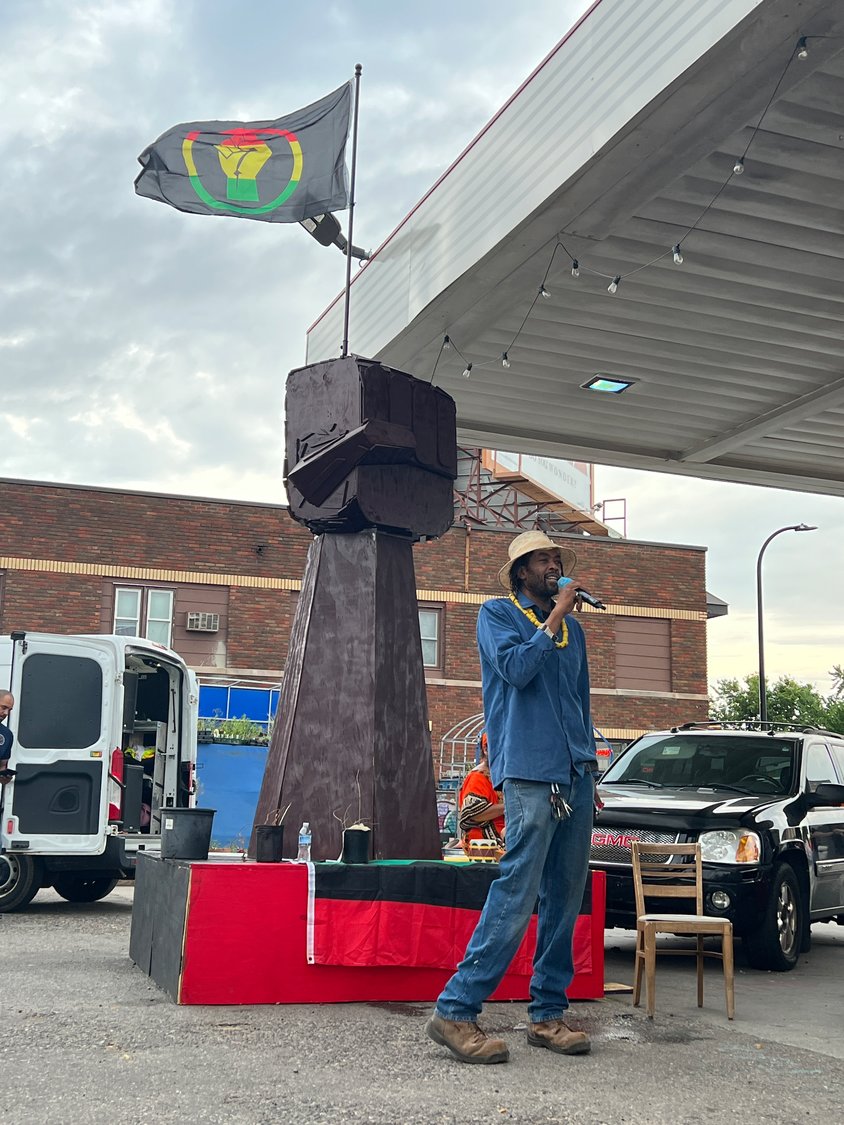 Jay the Gardener stands before the newly created fist, which will be loaded onto a truck and on its way to Akron, Ohio, before the evening is done.
Jill Boogren
Previous Next
Posted Sunday, September 18, 2022 8:51 pm

I live in mostly White spaces, and in these White spaces everything is back to normal. And it's intolerable.”
By JILL BOOGREN

The little white house at 4600 Columbus Ave. S. is a typical south Minneapolis home. It has a garden out back and another out front, where every year in mid-July the Black-eyed Susans bloom. Its simple serenity belies its roots in Minneapolis history, though, as indicated by a limestone pedestal on the front lawn bearing a plaque that describes how it earned a spot on the National Register of Historic Places.
Formerly the Arthur and Edith Lee house, it is the site of a 1931 race “row,” as termed by the then Tribune - a White mob numbering in the thousands had gathered out front to coerce the Lees to leave. They first tried paying them but ultimately resorted to hurling bottles, black paint and racial epithets at the home.
The Lees were Black.
And though Arthur Lee was a war veteran and U.S. postal worker, that wasn’t enough to break the racial covenant that denied home ownership to people of his color.
In a 1931 edition of The Crisis, “A Roman Holiday in Minneapolis,” Chatwood Hall wrote, “Mr. Lee’s first serious hint of trouble was a large sign placed on his front porch, bearing this inscription ‘No N-s [racial slur is spelled out] Allowed in this Neighborhood. This Means You.’”
“Please, never forget that it wasn’t just the south that dealt in the Jim Crow behavior,” said high school teacher and GFS resident Marcia Howard to community members who gathered in front of the home on July 11, 2022.
A steel sculpture that stands with the plaque, created by Chicago Avenue Fire Arts Center (3749 Chicago Ave.) with Obsidian Arts, has a portrait with this quote from Arthur Lee from July 16, 1931: “Nobody asked me to move out when I was in France fighting in mud and water for this country. I came out here to make this house my home. I have a right to establish a home.”
Carla Jo “CJ” Bielawski, whose parents Carl A. and Pearl Lindstrom moved into the home in 1957, is the current resident and caretaker of the property. She keeps the Lee’s contribution to the house alive by tending to the Black-eyed Susans that are planted throughout the property.
“Those are the same babies of the ones Edith Lee planted in 1931,” said Howard. “And for that reason, the idea of commemorating what happened here and bringing it to the Square, where we have had an occupation that is markedly different than what happened here” – this drew cheers from the two dozen people there - “because we are there for equality. We are here for liberation. We’re here for dismantling systems of racial redlining, profiling, inequity that happened here.”
People tucked cut flowers behind their ears and, to the music of Brass Solidarity, marched in procession to 38th and Chicago. There they were met by CJ who had already presented seeds to Jay the Gardener to plant throughout the Square.
“Today was the day 91 years ago that [the Lees] were told, ‘Go. We’ll give you money if you go,” said CJ. “That man was American. Whatever his color is my color, we’re all the same color underneath. We all bleed red. So let no more blood be shed.”
The Lees moved within three years, and the neighborhood didn’t have another African American resident for 30 years.
Jay held up a box of “thousands” of Black-eyed Susan seeds and embraced CJ.
“If you see Black-eyed Susans sprouting up from every hem and hamlet and corner of this Square, it’s because Edith and Arthur Lee’s legacy continues,” said Howard.
See the University of Minnesota’s Mapping Prejudice project and view the TPT documentary “Jim Crow of the North” to learn more about discriminatory housing practices in Minneapolis. See JustDeeds.org to see if your home has a racial covenant on it.

Building power
Under The Peoples’ Way that same evening, in another quiet act of solidarity, artist jordan powell karis was constructing the components of a new wooden fist, like those that mark each of the four entrances to the Square. Once ready he hand delivered it to its destination – Akron, Ohio, where on June 27, 2022, Jayland Walker was killed by police in a hail of bullets shot as he was fleeing on foot. The medical examiner’s autopsy determined that Walker had 46 gunshot wounds; 26 bullets were recovered from his body.
Asked what moved him to build another fist, powell karis said, ”I live in mostly White spaces. And in these White spaces everything is back to normal. And it’s intolerable. It’s truly intolerable to see White spaces continue on while people are doin’ work and the work’s not done yet. And it makes it harder for us to do the work when that continuation is happening unconsciously.”
Five days prior, powell karis had no plans to do this. Something called him. He reached out to a reverend there, and it just clicked.
“The people there, they need the support. They need to know that they’re being cared for by the rest of the communities out here,” he said. “We gotta keep showing up for one another. We all just gotta keep showing up.”

Blessings
On the evening of July 14, to show solidarity with Jayland Walker's loved ones, activists gathered at the Square to bless the fist, which was now assembled and painted, for its journey eastward. Civil Rights Activist Rosemary Nevils offered the first blessing, pouring water for each name called of a person whose life was taken at the hands of police. But there was one more name to say today, once more from closer to home: Tekle Sundberg. (Articles at www.LongfellowNokomisMessenger.com).
The impact was felt throughout the Square. GFS community member C Chase had spent the night watching livestreams and trying to get information from residents.
“I had to tell people today that I can only stay a little while because I’ve got two vigils to attend tonight. We’ve gotta bless this fist to go to Akron for Jayland Walker, who was absolutely massacred. And in the early hours of the morning, overnight, we have someone presumably in what seemed to be a mental health crisis shot for it while his parents were outside,” she said. A vigil was being held for Sundberg after the one at GFS. “And I’m in coordinator mode. I show up to this space that holds the grief and resistance to this very atrocity, and I show up to make sure we have water, to make sure people are seated, to make sure it’s accessible for those who need it. And this is not who I wanna be in this space or in any moment. I don’t wanna be facilitating other people’s grief.”
After community members spoke, everyone present was invited to sign the fist, which powell karis delivered the following day. One expression, written on its base, reads: “Love to Akron. Peace, Power & Love from GFS. Minneapolis.”