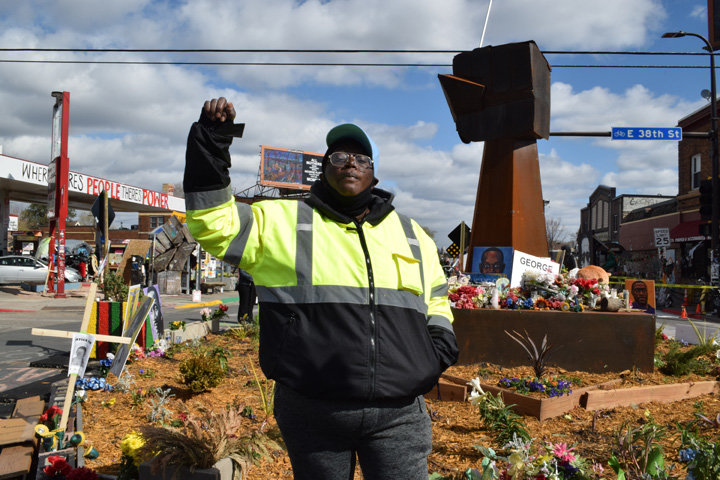 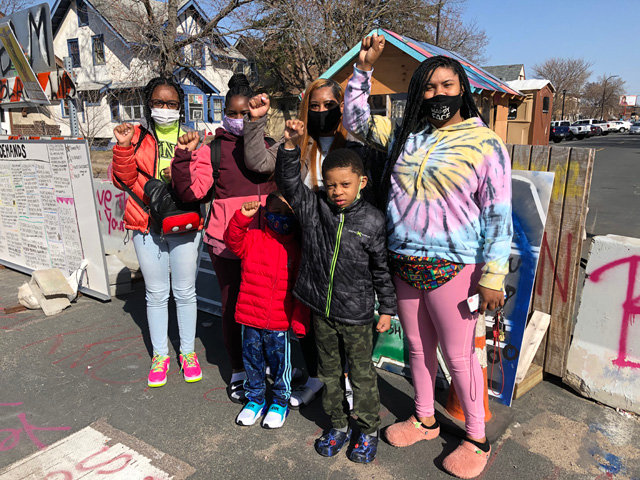 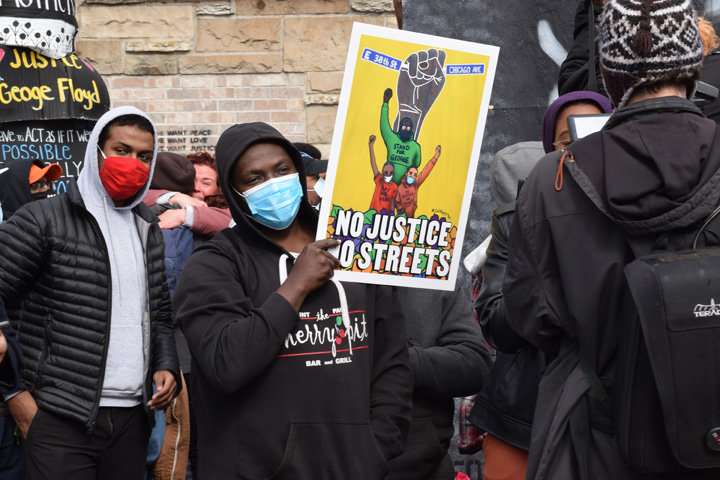 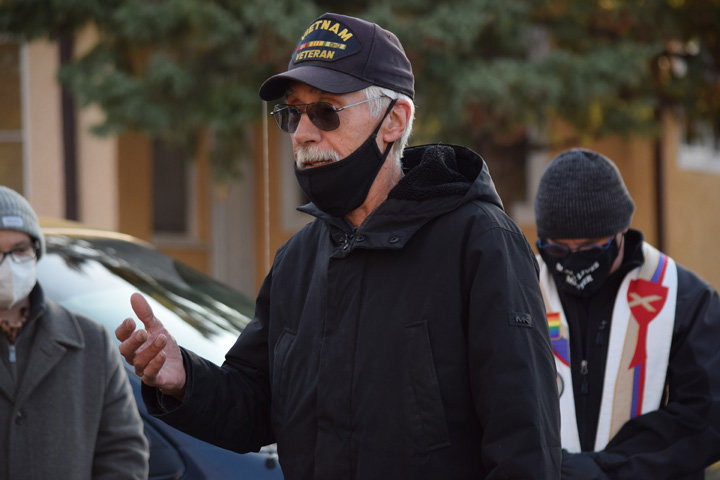 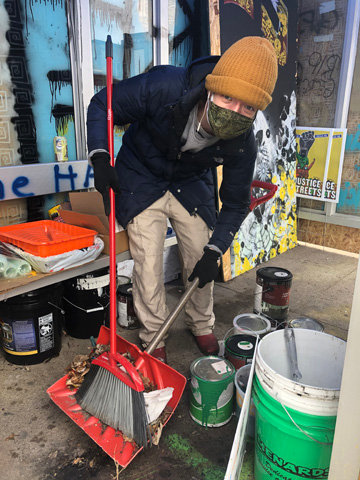 Phi Khalar: Being part of the community at George Floyd Square “means everything.”
Jill Boogren 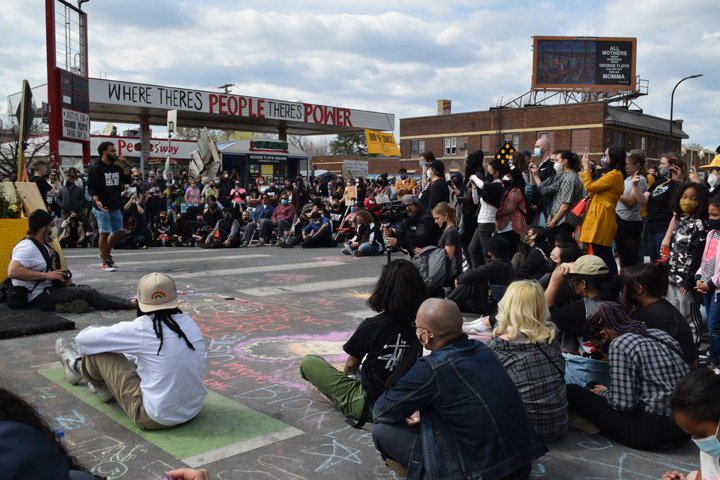 At the start of the Derek Chauvin trial, visitors from the Metro area of Detroit, Mich., approached the south gate of George Floyd Square at 39th and Chicago. They had just one day left in Minneapolis and wanted to stop there before they went home. Both Black women raising Black children, these mothers spoke to the significance of being there with their sons and daughters.
NaJee W. said she became active in Michigan after her son asked her, “Would that happen to me? Like, will I go out into the streets and get killed like that?”
“My son is going to grow up to be a Black man one day. Ever since then, it really touched my heart. You know, that coulda been my son,” said NaJee. She was moved to get active in her community, to be part of the positive change. “I wanna do this for everyone that don’t have a voice right now.”
For Schiantae Mullins, it was important to bring her children there to show them firsthand what was happening.
“I am a Black woman, I have a Black son and a Black daughter, I have uncles, I have a mom, I have a sister. We’re all experiencing this together. Whether it happens to us or it happens to someone else, it’s trauma from over the years, and it’s just very important that they get to see and they get to know what’s goin’ on... and that they know they have a voice and their voice should be heard,” she said. “Hearing George Floyd call for his mother? That did not resonate with me well. That coulda been my son. It was hurtful to hear. It’s just a lot. Just bein’ here. It gives me goose bumps bein’ here.”
Young Levi W. added, “The only reason we’re protesting because how George Floyd died like Martin Luther King, ‘cause we need to protest to all the Black presidents in the world.”

John M. Huerth, welcoming
As with many others, these visitors were welcomed by community member John M. Huerth, who greeted them with a smile, as he has done countless times since coming to hold space at the Square last fall. A Vietnam Veteran and former teacher who once wanted to be a missionary, Huerth said his mission now is two words: peace and justice.
He uses a holiday lights analogy to describe his reasons for plugging in to this movement. “All these little twinkle lights, there’s one that’s not in there. Once I plugged in I felt the energy of the whole group.”
Being at south gate, which is where most people go in and out, Huerth senses the solidarity of the neighbors. He said usually it’s a wave or a fist being pumped into the air, but one woman put the peace symbol up. “It’s the battle of hearts and minds. We used to use that in Vietnam, battle of hearts and minds.”

A Global Memorial
GFS is many things at the same time. Shown in portraits, prayer flags and placards, it is a memorial, where people come to pay their respects, to mourn, and to offer tributes and prayers. Volunteer caretakers with the George Floyd Global Memorial, with support from the Midwest Arts Conservation Center and in temporary space provided by Pills-bury House & Theater (plus a greenhouse built by community), have preserved more than 2,500 offerings left by visitors (a small portion of those are on display now through Juneteenth in the Nokomis Gallery of the Chicago Avenue Fire Arts Center (3749 Chicago Ave.).
GFS is also a gathering place for rallies and events, like the Black & Yellow Asian Solidarity event on April 18 that brought hundreds of people into the Square to hear music and spoken word and to rise up in unity against the killing of Daunte Wright and other stolen lives. A “Love Fest,” held earlier in April, had people literally dancing in the street. There are often calls to action and petitions circulated, this time by Yes 4 Minneapolis calling to change the city charter (and therefore public safety) in Minneapolis.

Place of protest
GFS is a place of protest. On June 2, 2020, after neighbors placed makeshift barricades across each roadway leading into the Square to keep harm from coming to those entering the memorial, the city of Minneapolis placed cement barricades – one block north and south on Chicago Ave. and one block east and west on 38th St. (with another at Park Ave. that has open access) – where they’ve remained since. Eager to reopen the streets to through traffic last August, city leaders asked what justice looked like; the community’s response was Justice Resolution 001.
Beginning with “WHEREAS, the city killed a man in the street…” the resolution lists 24 demands for justice (bit.ly/georgefloydsquare-a), which range from removing specific authorities from prosecutorial and investigative bodies (i.e. Hennepin County Attorney Mike Freeman and those who head up the Bureau of Criminal Apprehension), to holding officers accountable for police violence, to investing in local businesses, jobs and training for area youth.
City leaders have been in ongoing talks with community members but took a hard left turn on Feb. 12, 2021 when they announced their plan to reopen the intersection at 38h and Chicago to through traffic after the conclusion of the Derek Chauvin trial. On April 1, Mayor Jacob Frey and Interim Public Works Director Brette Hjelle announced the results of a survey they felt showed support for reopening the streets. The survey offered just two choices, though – each a means of reopening the streets to two-way traffic. Of 4,000 surveys mailed, 685 were returned (a response rate of just 17%). Unmoved, those holding space inside the barricades remain steadfast: “Injustice closed the streets. Only justice should open them.”

People first
Above all, GFS is a community of people. They are chefs, cooks, carpenters, welders, electricians, nurses, medics, teachers, artists, photographers, musicians. They are the deeply faithful and the secular, the mothers and fathers, sons and daughters, cousins and uncles and aunties. They are caretakers, collaborators and change makers who have made the choice to come together during a pandemic at the epicenter of a global racial reckoning and do something extraordinary – forge community.
It is what compels people to show up every day, twice a day, under the awning of the Peoples’ Way (the former Speedway) to share updates, ask for help, offer support, check in with each other and talk. Mutual aid, in the form of free food, free clothing in the bus shelter-turned People’s Closet, free books in the People’s Library, and in countless other ways, is practiced here every day. Grievances are aired, solutions sought, problems resolved – much of it through conversation that for many months has taken place around a crackling fire.
As resident Marcia Howard says: “We go next door, we don’t go ON Nextdoor.”
If the buzz of activity at the Square is what folks see and hear, there’s an entire hive of activity that is hidden from view. These are the workers, who instead of waiting for springtime to melt winter away, shovel grit-encrusted snowbanks into wheelbarrows and haul it away. These are the workers, who lift, tenderly, a flower, votive or tiny stuffed animal in order to clear a single piece of debris blown by the wind into the offerings laid at the memorial. These are the workers, who, when that wind turns sideways, blowing rain, hail, sleet or snow, race to lower a tarp to shelter the large portrait of George Floyd. These are the workers, who chop firewood, build greenhouses, tend to gardens, light candles and bring coffee at the start of each new day – for 330 days, from the moment George Floyd took his last breath until the guilty verdicts were read, and counting.

Phi Khalar, a helper
One of these helpers is Phi Khalar. They started coming to the Square in August, ready to listen and amplify, in time recognizing where things needed to be done and stepping up.
“Whether it’s little menial tasks of sweeping up stuff, picking up garbage, shoveling, I like doing that grunt work,” they said. But Khalar also helps facilitate ideas that they or others can follow through on, depending on their skill set. Asked what being part of this community means to them, Khalar took a long moment to find the words.
“It kinda means everything,” Khaler said, explaining that they’ve been part of protests and campaigns and supported different organizations their entire life. “The work that residents and just regular people are doing out of their own volition, out of their own drive, to connect with each other and know community, it’s the most real thing I’ve ever felt in my life. And yeah, it means everything.”

Eliza Wesley, the Gatekeeper
This sense of community runs deep for Eliza Wesley, aka the Gatekeeper, who came to the Square the day after George Floyd’s life was taken from him and has been there “6 and 12, 3 and 9,” walking the same four blocks, ever since. The Gatekeeper’s role is to make sure people are welcome when they enter into the “free state of George Floyd.”
“The reason why I say 'You are now entering the free state of George Floyd. Respect One Another. Peaceful Memorial' is to let you know everyone’s welcome in the Square. And that you remember that you got freedom and peace when you walk in this Square. And so those are my words that I put on the north [gate], to let everybody know that this is a peaceful memorial and that we want peoples to come here and be safe,” said the Gatekeeper, who keeps constant watch, guided by God.
“This community is so great and so a part of me. It mean everything to me. As a Black community, our thing here is, ‘Together we stand, divided we fall.’ That mean we all stand here together… and we all comin’ together makin’ things right and correctin’ things that’s not right. We all bein’ on the same page. This is a village and this is a community, at all times.”
On Tuesday, May 25, the one year anniversary of the death of George "Perry" Floyd, the George Floyd Global Memorial and the GFS community will present Rise & Remember, a day of events, including community art and healing, a children's area, open mic, a concert and candlelight vigil. 1 pm. Check Facebook and other social media @gfgmemorial for info.