Will they find new locations in the Midway?

Wanting to stay, businesses face challenge of finding available space in the Midway 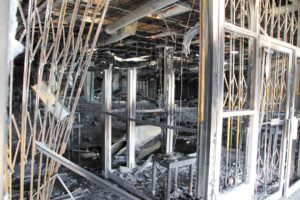 Fire destroyed the Foot Locker at the Midway Center on May 28, 2020. The leases for the stores there have been terminated prior to redevelopment. Some are looking for new locations in the Midway. (Photos by Tesha M. Christensen)

Midway Center businesses are moving on, after meeting a July 17 deadline to get their fixtures, equipment and any remaining inventory out of the fire-damaged building. Leases were terminated in late June by owner RK Midway.

The blow is softened by RK Midway’s Rick Birdoff and Minnesota United FC owner Bill McGuire’s announcement that they will provide $10,000 to help each affected business with moving, storage and relocation costs. Relocation costs would include costs required for a new lease, new equipment and any construction-related expense, according to a July 20 email.

The shopping center was extensively damaged during unrest following the May 25 killing of George Floyd at the hands of Minneapolis Police. Several shops were looted and burned, including Foot Locker, To New York and Big Top Liquors. Others sustained smoke and water damage.

McGuire and Birdoff have also indicated that they are accelerating their plans to build at the Midway Center site. They have not ruled out having current tenants return in the future. But some small business owners said they cannot wait for even a few years to move into new building and what is called United Villages at Midway.

Area district councils are calling for help for Midway Center and other affected Midway businesses. They are asking that the city and public and private funders step in with help.

City officials, community development leaders, center management and business owners met July 14 to discuss next steps. Business owners had assumed that at some point, they’d have to relocate to make way for the mixed-use development planned around the Allianz Field major league soccer stadium. The fire has accelerated those plans.

Ward One Council Member Dai Thao said the city has small business resources to offer. “We grieve the loss of their business with them, but we are prepared to help them move forward,” said Thao.

“I really sympathize with these small business owners. It was important for us to hear from them and have them share their experiences with us.”

But one challenge leaders cite is that of finding available space, especially in the Midway.

About a dozen businesses were affected by the fire, smoke and water damage. Foot Locker, Great Clips, Game Stop and To New York in the strip mall sustained the heaviest damage, as did the stand-alone Big Top Liquors building.

Some small business owners initially assumed they would be able to clean up their spaces and possibly reopen. Two restaurants, Peking Garden and Golden Gate Café, are the strip mall’s oldest tenants. Golden Gate Café has been owned and operated by the Hui family for more than 40 years. Mary Lau’s family has operated Peking Garden at Midway Center since 2006, after losing a longtime Minneapolis location to TCF Bank Stadium development.

Lau said she watched the fire news coverage on television and went to see the damage as soon as possible. “We sustained smoke and water damage but otherwise our restaurant was OK,” said Lau.

Finding out that the strip mall will be torn down was a shock, she said. “We don’t know where we are going to go or what we will do.” She is hoping to work with her landlord, but doesn’t know what she’ll do if there is a long wait for a new space.

Lau had recently renovated the Peking Garden space, investing about $350,000. “We have lost everything,” she said. “This very difficult for us.”

Two Gofundme accounts have been started for Peking Garden, and have raised more than $25,000. Wyn Huynh, a friend of Mary Lau, said he and others felt compelled to help after hearing about the restaurant’s forced move.

The owners of Thien’s Cajun Boiling Seafood are newcomers to Midway Center, opening up in 2018. Co-owner and chef Thien Do said his business and its neighbors at the north end of the strip mall only sustained smoke damage. “We were very surprised to get the letter indicating that our lease would be terminated,” he said. “We are hoping to stay in the Midway but we don’t know what we’re going to do.”