Watch out for jumping worms 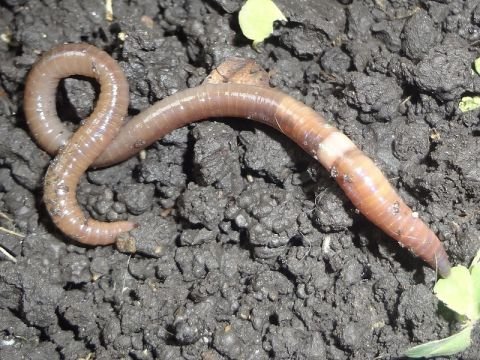 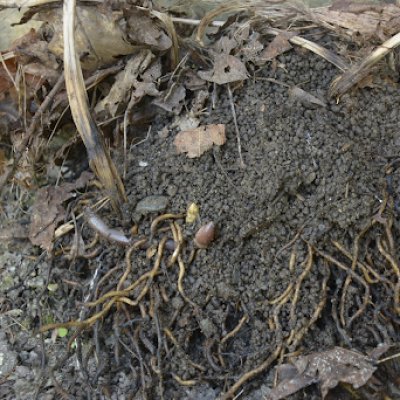 Jumping worms are an invasive species.

• As their name implies, they jump, wiggle and are very active.

• Jumping worms live in the leaf litter and the top few inches of soil on the forest floor.

• They change the soil texture to appear like coffee grounds, strip the soil of nutrients and can kill plants.

• Prevention is the only known way to manage them.

• Jumping worms should be disposed of in the garbage. Do not release them into the environment.

• Jumping worms should be reported.

Why be concerned about
jumping worms?
Jumping worms (Amynthas spp.) are an invasive species native to eastern Asia. In fact, no earthworms are native to Minnesota.
Jumping worms contribute to major forest ecosystem disturbance and are also troublesome for homeowners and gardeners. They negatively impact soil structure and reduce plant growth.
Earthworms, including jumping worms, are ecosystem engineers. By changing soil characteristics, they contribute to a number of other ecosystem shifts that may ultimately increase allergies and Lyme disease, reduce crop and forest productivity, and reduce forest biodiversity.
Like all earthworms, there are no research-based management options, so preventing their introduction and reducing their spread are the only two proven forms of management.

How to identify jumping worms
Jumping worms can be 1-1/2 to 8 inches or more in length.
They are similar in size to other earthworms such as nightcrawlers or some of the larger angle worms, but their clitellum (collar-like ring) and coloring are different.
The clitellum is located 1/3 the length down the worm from the head, and it is smooth, cloudy-white and constricted, unlike the swelled saddle-like clitellum of European earthworms.
As their name suggests, these worms may jump and wiggle noticeably when disturbed. They can move across the ground in an “S” pattern like a snake.
Jumping worms live for only one season. They hatch in late spring in 1-4 inches of soil. The worms grow during the summer and the adults start laying eggs in August. We don’t know how many eggs each adult can lay. Eggs are very small but can be identified. Removing eggs is likely impractical.
In Minnesota, jumping worms have been found in home and landscape gardens.
They are surface and shallow-soil dwellers and have a large potential range within the state. As of May 10, they had been reported 32 times in Ramsey County and 94 times in Hennepin County.

How to control jumping worms
There are no pesticides labeled for worms in the United States. No products can legally be used in Minnesota as pesticides, including for jumping worms, if they are not labeled and regulated by the EPA and the Minnesota Department of Agriculture. Prevention is the only known management for worms.
If you have jumping worms, consider participating in a citizen science project to help better understand possible jumping worm management options.
Don’t buy worms advertised as jumping worms, “snake worms”, “Alabama jumpers” or “crazy worms” for any purpose.
Anglers: Dispose of unwanted bait worms in the trash. Never release any worm into the environment – all earthworms are non-native in Minnesota.
Gardeners: Be on the lookout for jumping worms in soil, potted landscape plants, mulch or compost. If you see soil that looks like coffee grounds or notice unusually jumpy worms in your mulch: Don’t move any material that might be harboring jumping worms. Report any suspected jumping worms.
Composters: If you purchase worms for composting, know how to identify the species you are buying. Check your order to ensure it doesn’t have jumping worms in it. Get advice from Great Lakes Worm Watch on the ABC’s of composting with earthworms safely.
If you are purchasing compost, you can ask if the supplier follows the “process for further reducing pathogens” in their composting method. This process makes sure that compost reaches high temperatures (131°F or above) and involves turning compost piles on a schedule. If the facility is following that process they will likely be able to kill jumping worms and their eggs. Following this process also kills weed seeds.
When out enjoying nature, follow the recommendations of PlayCleanGo: Stop Invasive Species in Your Tracks:
• REMOVE plants, animals, and mud from boots, gear, pets and vehicles.
• CLEAN your gear before entering and leaving a recreation site.
• STAY on designated roads and trails.
Jumping worms, as with all worms, should be disposed of in the garbage. Do not release them into the environment.
It is unclear what level of worm harvest will produce a meaningful difference in your landscape.
Information from the University of Minnesota Extention Service and Ramsey County Master Gardeners. More at https://extension.umn.edu/identify-invasive-species/jumping-worms