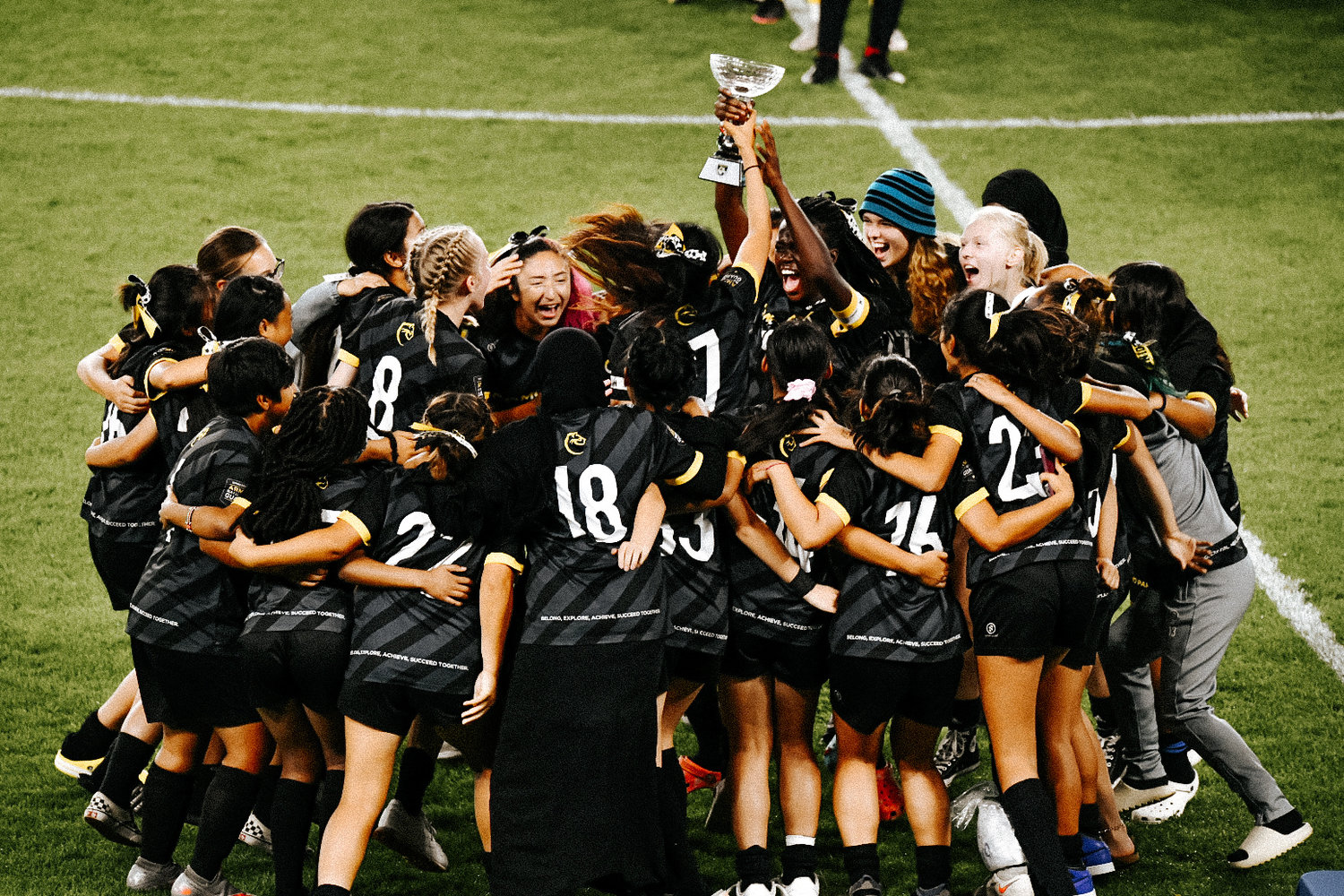 The Como girls soccer team celebrating with the Mayor’s Cup after receiving it from St. Paul Mayor Melvin Carter on Friday, Oct. 8, 2021. (Photo by Wil Galvez) 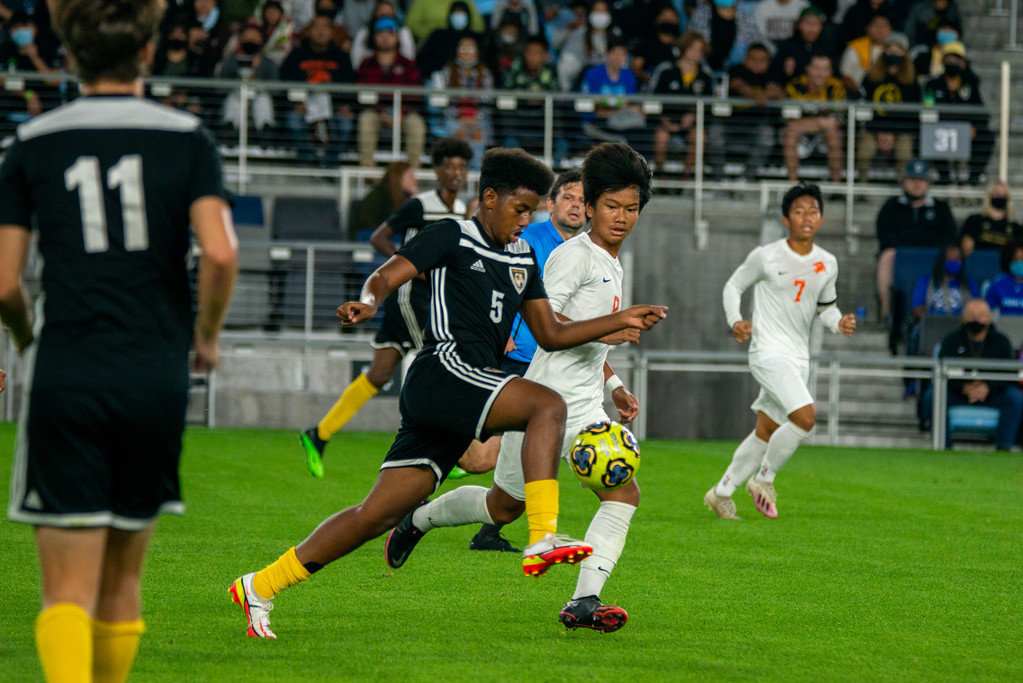 Como Park High School player Khadar Aden works to advance past a Humboldt defender during the Mayor’s Cup on Friday, Oct. 8, 2021. About 2,000 local families filled Allianz Field for the event. For most, it was their first time inside a professional stadium. The Mayor’s Cup has been held annually since 2016. The Como boys team lost in a 4-3 match, and the girls won 1-0. (Photo by Rob Spence)
Rob Spence 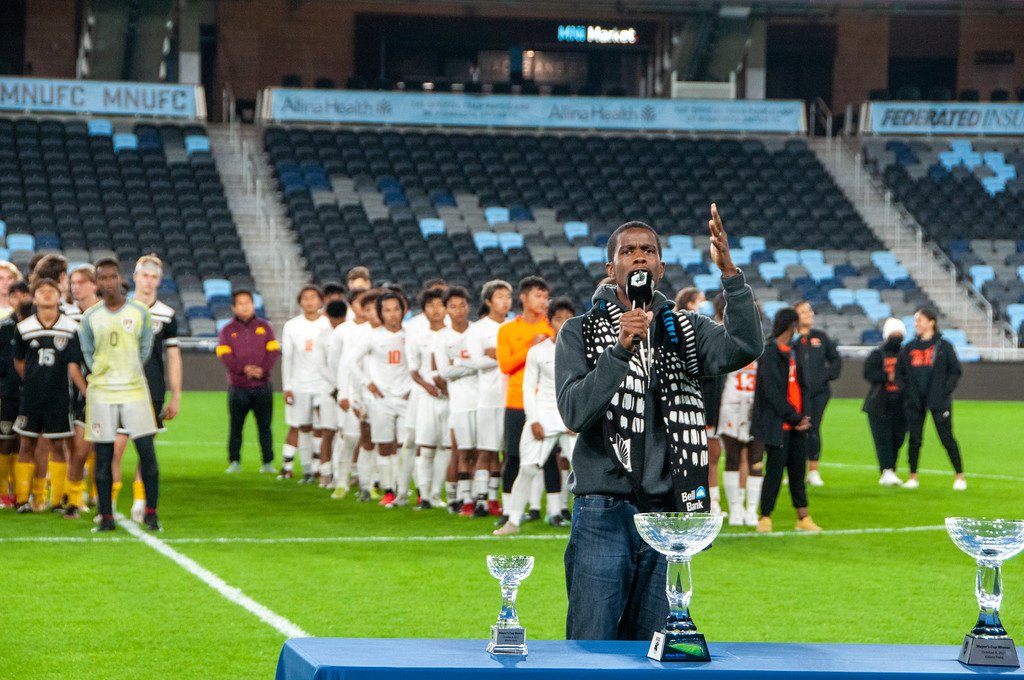 Mayor Carter presented the trophies in a ceremony after the games on Friday, Oct. 8. (Photo by Rob Spence)
Rob Spence 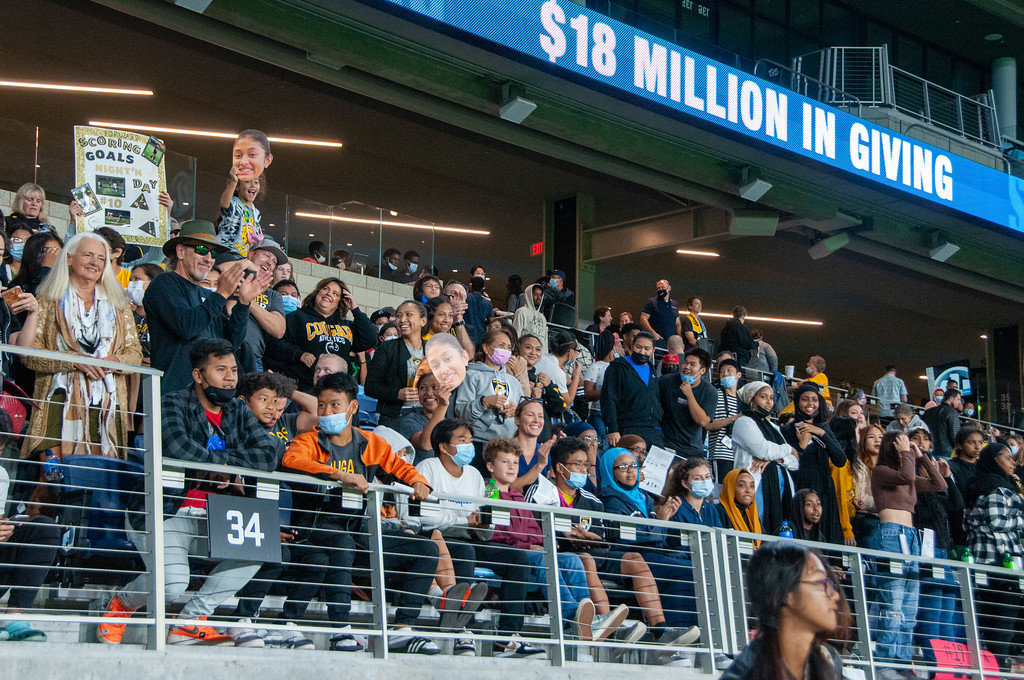 Over 2,000 fans came out to cheer Como Park and Humboldt in the Mayor’s Cup soccer matches at Allianz Field. It was the first time high school teams played at the professional stadium. (Photo by Wil Galvez)
Rob Spence 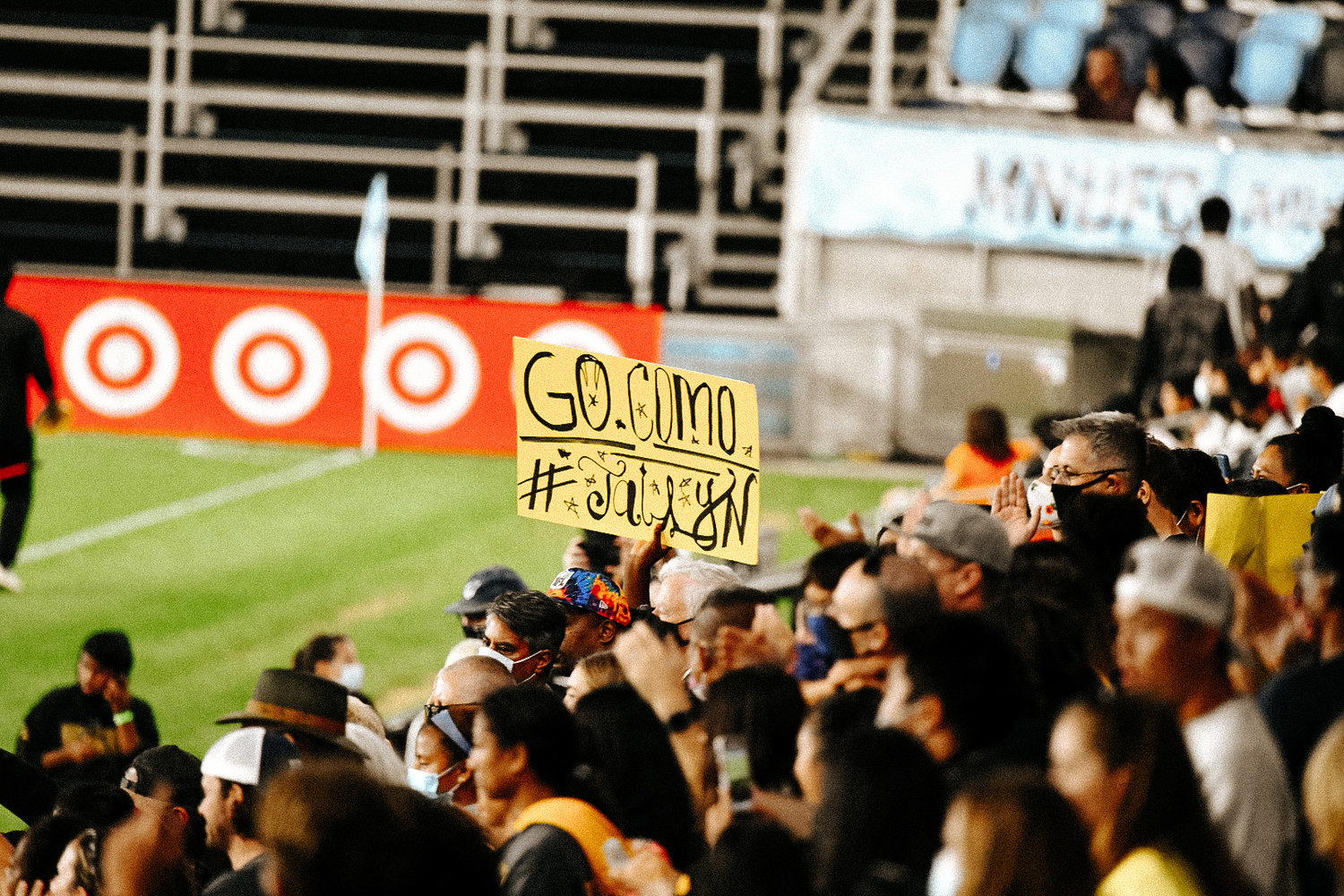 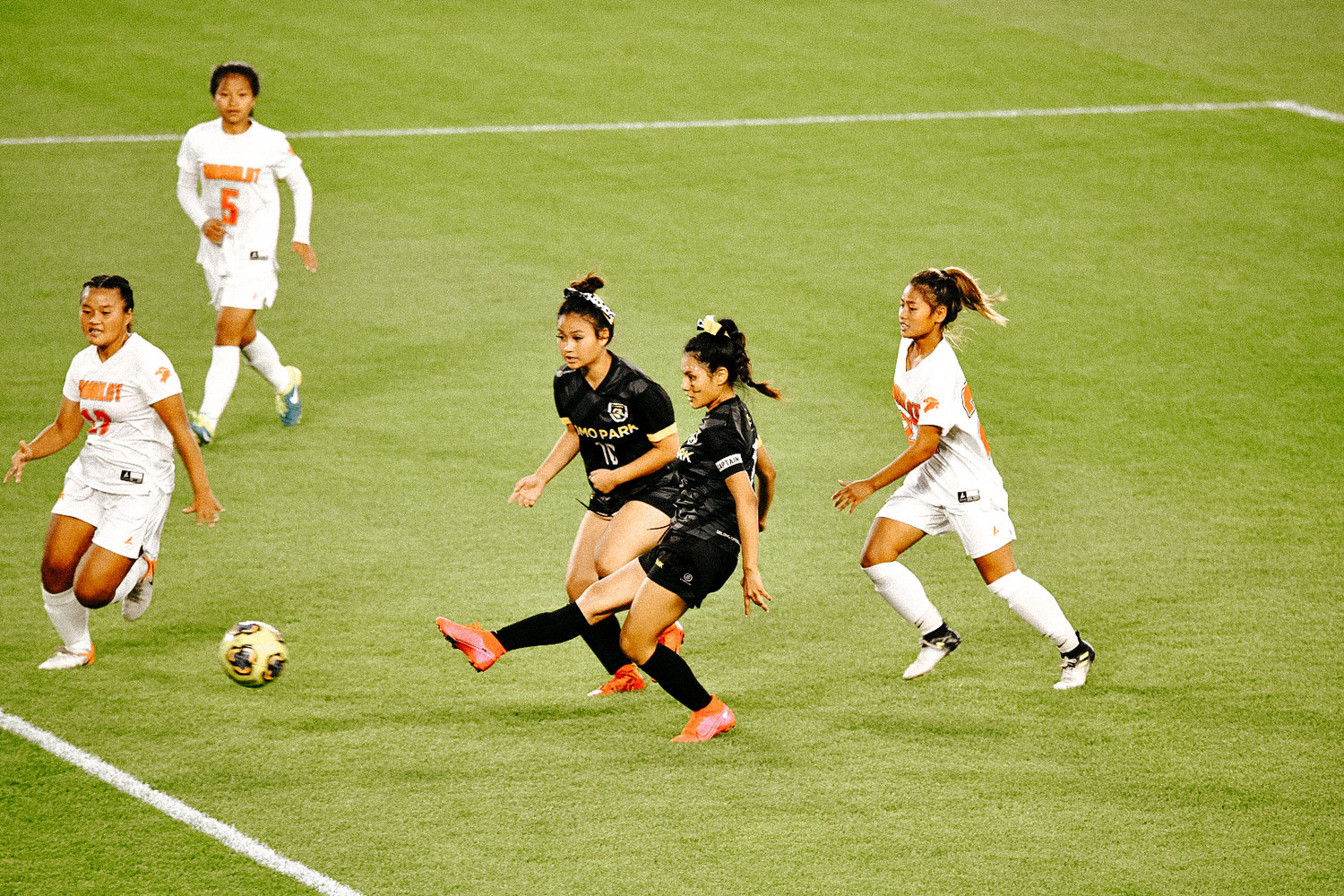 Como’s Lenia Lopez scored the game-winning goal for the Cougars. The final score for the girls team match was 1-0. (Photo by Wil Galvez) 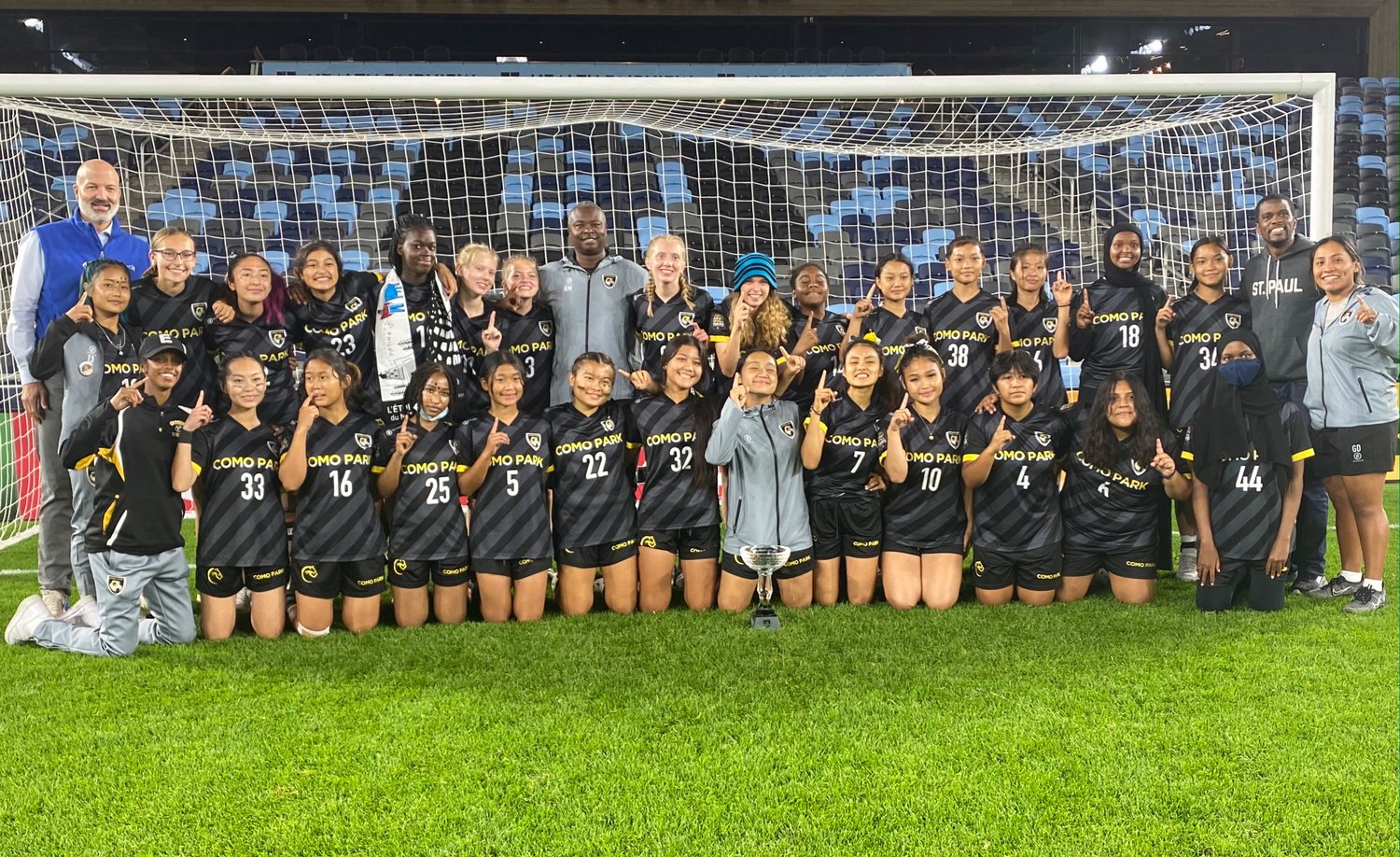 On Friday, Oct. 8, 2021, the Minnesota United Football Club (MNUFC) hosted the first high school matches ever played at Allianz Field – the sixth annual Mayor’s Cup trophy games between the Como Park and Humboldt varsity girls and boys teams.
The experience was an unforgettable dream come true for the players, families, fans, and the St. Paul high school soccer community as a whole.
Bell Bank partnered with MNUFC to sponsor the event and provide free admission. Club officials reported just over 2,000 fans in attendance. For most, it was their first time inside the professional stadium.
And for the Como and Humboldt players who have watched their hometown team’s games on television to actually compete on the pitch and represent their schools? More than they ever could have imagined.
“It’s amazing. I never would have thought we’d be able to play here at Allianz,” said Como captain Soren Berg. “To be the first high school teams playing in this stadium is just amazing.”
MNUFC Public Relations Director Eric Durkee, a Como graduate from the class of 2004, says the club’s values are based on growing the sport and uniting the community around the game.
“From the outset of building and designing Allianz Field we wanted to create a space for soccer to succeed at all levels,” Durkee said. “We felt this was a fun way to provide a moment for high school soccer players to create memories that will hopefully last a lifetime.”
Mission accomplished.
The memory making began when the gates opened. Fans filled in to the lower bowl seats behind the team benches as the girls teams warmed up, with all the music, video, and fanfare the professionals receive.
Once the girls game kicked-off, the competitive instincts of both teams kicked in. In a back and forth contest, all scoring chances were denied through the first half. Early in the second half, Como senior Lenia Lopez pounced on a loose ball in the box and powered a shot into the back of the net.
The goal would hold up as the difference maker with the Como girls winning the Mayor’s Cup match by a score of 1-0.
A spontaneous celebration on the field at the final whistle was the prelude to the awards ceremony with Mayor Melvin Carter, who was on hand to watch the action and present the actual Mayor’s Cup trophies to the winning teams at the conclusion of the boys’ game that followed.

Boys match
It started with the typical speed and intensity of every Como-Humboldt boys match. The Cougars and Hawks always play with pride, but the Mayor’s Cup adds another element. And so did Allianz Field.
The pitch is wider than the school fields, the grass is beautiful and real (not turf), and the lights were shining brightly as the large crowd roared. There were several quality scoring opportunities for both teams, but even after two overtime sessions, the score remained locked at 0-0.
A penalty kick shoot-out isn’t used by the state high school league in the regular season. But when you’re the mayor, and two St. Paul teams are playing for the Mayor’s Cup, you ask the crowd if they want a penalty kick shoot-out. The answer was a resounding “yes” and the mayor approved.
In dramatic fashion, Humboldt converted 4 kicks to Como’s 3. The Hawks jumped for joy while the Cougars felt momentary heartbreak.
All four teams were honored by the mayor in the post-game ceremony. They all represented their schools with outstanding effort and gave the St. Paul soccer community a night of joy.
Como boys co-coach Jonah Fields, who created the Mayor’s Cup matches back in 2016, reflected on what the night at Allianz meant.
“It was such a special privilege,” Fields said. “It’s been so much fun celebrating soccer and our communities together.”