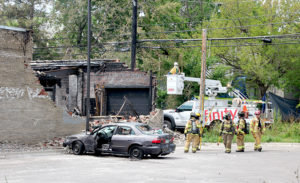 Firefighters were still working at the back of the Sports Dome on Friday, May 29. Over 170 businesses were damaged in the Midway following the murder of George Floyd. (Photos by Tesha M. Christensen)

Midway area business continue to sort out their futures in the wake of late May 2020 unrest after George Floyd was killed. While many business have reopened and others are pulling construction permits, some still face an uncertain future. That’s especially true for small business that leased storefronts and didn’t own their spaces.

Bole Ethiopian Cuisine and Lloyd’s Pharmacy are two of the highest-profile businesses that were destroyed. Lloyd’s has opened an interim location at 694 Snelling Ave. N., while Bole seeks a new home. Both had successful fundraising campaigns.

But it’s a different story for the Midway Center tenants. They are being forced to move out, receiving word June 25 that their leases were terminated. About a dozen business remain in what originally was the eastern part of the shopping center. A letter from property owner Rick Birdoff and RK Midway said that businesses must have items out of their stores by July 17.

The letter indicated that there may be opportunities for businesses as the Midway Center block is redeveloped, but whether business owners can wait months if not years to reopen is a question mark.

The lease terminations affect longtime businesses including Golden Gate Café and Peking Garden. Golden Gate had been in business for about 40 years. Peking Garden had relocated to the strip mall in 2005, after losing its previous location near the University of Minnesota.

Businesses sustained varying levels of damage. Foot Locker and its immediate neighbors sustained the most damage due to fire and water damage, with businesses at the north and south end of the center only sustaining smoke damage.

Businesses had remained closed since late May. MidPointe Center had canceled all events. Family Dollar had moved some employees to other locations. Bank of America, which had small storefront with ATMs, was already preparing to open at University Ave. and Fry St.

Other area businesses have slowly reopened or prepared to reopen. What could become controversial is that Taco Bell at 565 N. Snelling Ave. is seeking approval to replace its building, which was damaged during the unrest.

The longtime restaurant needs a new conditional use permit before that can happen. The St. Paul Planning Commission Zoning Committee is to hear the request at 3:30 p.m. Thursday, July 16. Meetings can be listened to virtually and the public can present oral or written testimony.

This will be the second time in a year that restaurant owner Border Foods has sought permission to build a new facility. Hamline Midway Coalition and city staff recommended against the request in early 2020, and it was withdrawn by the applicant.