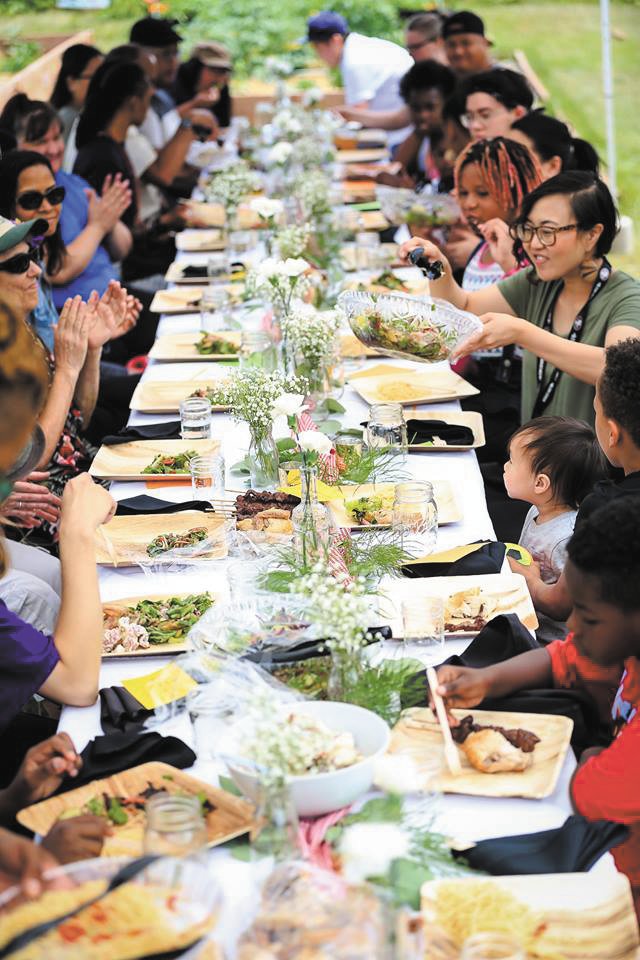 Community members gather to share a meal. UFGA works to bring together the community divided by Interstate 94. (Photo submitted) 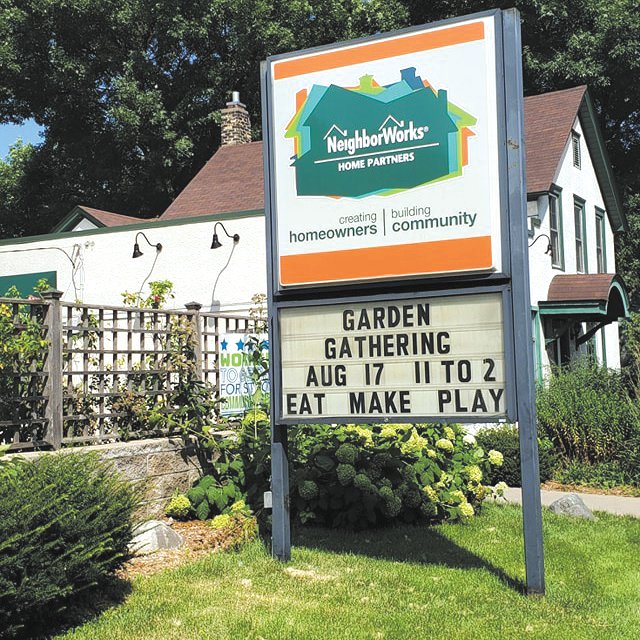 The Greenhouse Garden is on the property of NeighborWorks Home Partners and is currently sustaining the youth farm. (Photo submitted) 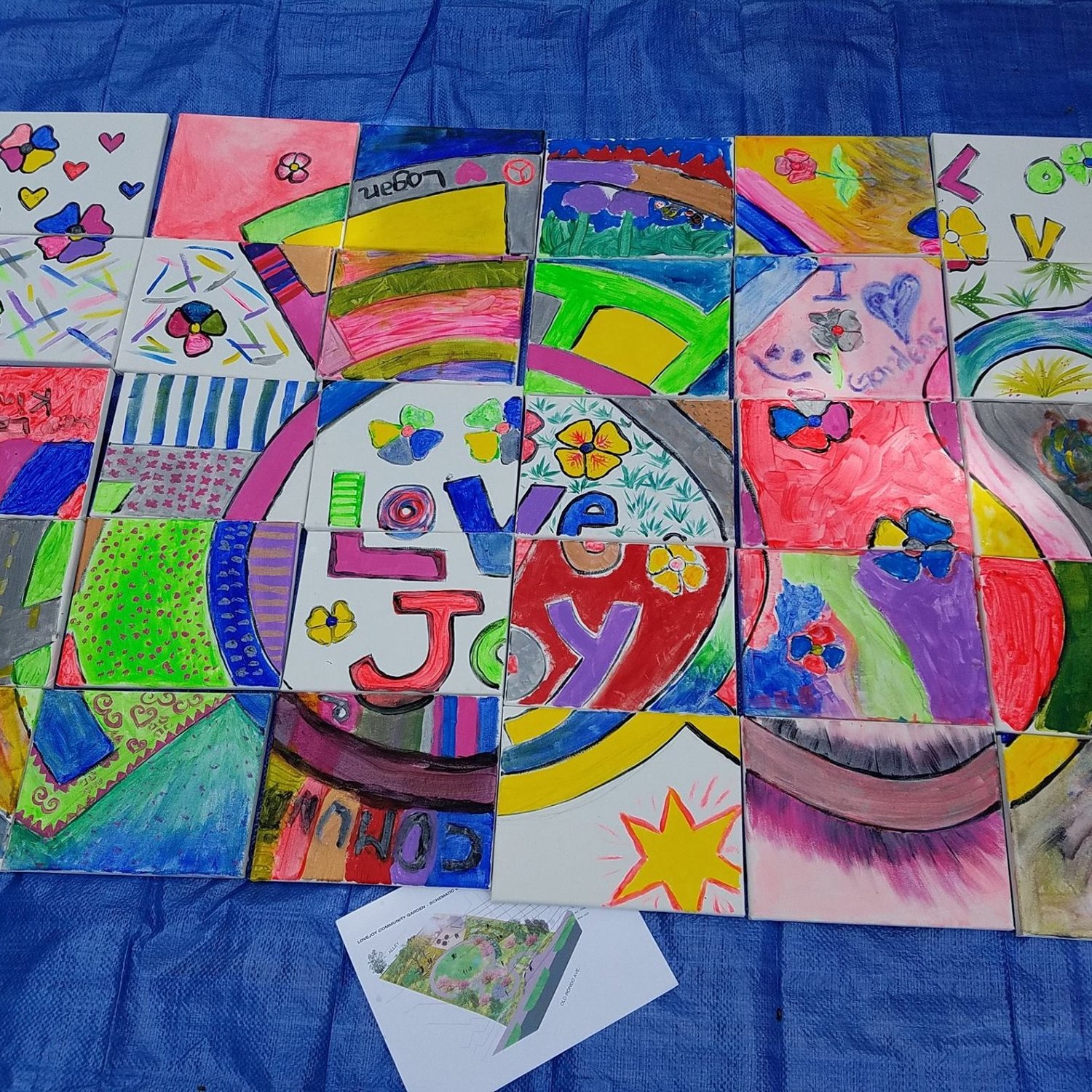 As the school season ends, Megan Phinney, coordinator of the Children’s Gardening Program at Urban Farm and Garden Alliance (UFGA), gets ready for new and returning children to flood the gardens for the summer months.
Phinney recalls planting peas very early in the Peace Garden her first year doing the program. A whole family of kids ran up and down the block as she was picking peas from the garden. She asked them if they wanted to try the peas, and like some kids they were turned off by the idea of eating green food. But shortly after they tried the peas, she couldn’t keep them from picking and eating the peas.
The Children’s Gardening Program is made up of 10 sessions starting around the middle of June after the kids are out of school. They are 90 minutes each week and are usually held on Wednesdays. They use hands-on learning and some science background to gardening, as well as fun and creative activities.
This summer they had a new opportunity to connect with a composting business in Wellington, New Zealand.
“They have this business where they pick up food waste with a trailer on a bike, and then they compost it,” Phinney said. “When it’s finished, they go put it in the garden.”
Phinney mentioned that both the kids and their parents were very excited to be able to learn from people who live on the other side of the world. Building connections is something UFGA strives to do, especially with groups that also accomplish good work.
Phinney said that the children’s program is still developing, but it has been a fun journey seeing not only the children’s garden grow but also the children develop through this gardening experience.
“A lot of them have grown up with us,” Phinney said. “There are kids who were really young when we started, and now they are teenagers. The intern that we hired at 12 is now 18, and she’s amazing.”
UFGA’s mission is to bring the community that has been torn apart by Interstate 94 back together by creating green space and sharing healthy, nutritious foods. One way they pull the community together is an event called “Afternoon Out.” Afternoon Out is designed to allow elders, younger kids and people who work second and third shifts to be able to join during afternoon hours.
“We close our street, and the past few years we’ve had a bouncy house,” said UFGA Co-Coordinator Melvin Giles. “We have groups like the Humane Society, and groups that represent jobs where people can find out information about jobs.”
UFGA first started in 2014. It is a collaboration of eight community gardens and a group of backyard gardeners with the goal of promoting reconciliation, healing, peace, social and environmental justice through gardening and sharing food in the Summit-University (Rondo) and Frogtown communities of St. Paul. UFGA also connects with other organizations and institutions such as University of Minnesota, Bethel University, Hamline University, The Storymobile and AfroEco.
These partnerships and relationships have created access to healthy nutritious foods and green space for residents in neighborhoods that have struggled due to problems associated with predatory loans, high levels of unemployment, and a complicated history of Interstate-94 splitting the historic Rondo neighborhood.
“I like helping folks to realize that they can grow their own food, they can save money, and it’s a nice way to kind of build community harmony and for people to get to know each other,” Giles said.
Giles said he is passionate about this alliance and wants to bring peace and healing within the community. He shared this experience that made a lasting impact on him as a community organizer. A couple of years ago, he and other members of UFGA brought some Somali youth to meet with some Micronesians in Minnesota, and they traveled together to Moorhead and back to the Twin Cities. During the trip, these young people got to share their cultures, and eventually they let their guards down to embrace one another without any judgments.
UFGA was awarded Ramsey County’s Farm Family of 2015. Looking forward, UFGA will be working in the Peace Garden with Engineers Without Borders from the University of Minnesota to set up an accessible pathway, a green house and a water catchment system to use the rainwater for watering the garden.