Through process, youth learn something and then teach the next person to do it 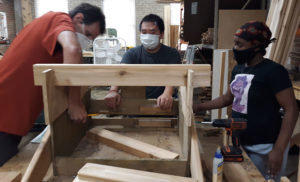 Lue Her (left), Marcellius Watley and Shadaria Brown build a chair. Through the Green Chair Project at Elpis Enterprise, youth who are homeless or who have been homeless learn woodworking skills. RIght now, work is being done at the Elpis workshop or outside. To purchase a chair or have a group sign up for a workshop, contact Elpis Enterprises at info@elpisentrprises.org or call 651-644-5080. (Photo by Jan Willms)

Resilience, collaboration, flexibility. All choice descriptions that organizations have needed to follow in these times of pandemic and social unrest. So why not bring back a project that worked before in the early 1990s?

Joel Sisson and Chris Hand came up with the Green Chair Project around 1991. It was shortly after the Rodney King beating in LA, and Sisson had recently moved to a South Minneapolis neighborhood around 31st and Pleasant.

“It was a crack neighborhood, off and on, and Minneapolis was called Murderapolis at that time,” Sisson recalled. “I got jumped and beat up by some guys, and I had to decide: fight or flight? What do I do to not be afraid of these young people who were identifying as gang members? How do I change that interaction for both them and myself, so we can get to know each other in different ways?”

And so the Green Chair Project was born. Sisson and Hand had inner city youth building Adirondack lawn chairs and painting them green. “The idea was that we would build chairs and give away two to each house on our block. We worked in the back yard that we tore up to put this project together.”

And as the chairs were being constructed, Sisson noticed that neighbors came out on the street. Normally no one came out unless there was a fight, or a shooting or a bust, according to Sisson.

The project took off, and later chairs four times the size of the original were built and placed around Minnesota and in Washington, D.C. Sisson said chairs were placed at Duke Ellington High School in D.C., and installations were done at the Washington Monument and at Congress.

After about 12 years, Sisson stepped back from the project. He was no longer working with youth, and the chair-building was placed on a back burner.

Fast forward to the spring of 2020. A pandemic unlike anything since 1918 was ravaging the country. And then, in Minneapolis, George Floyd died as a police officer knelt on his neck for more than eight minutes. This time, not just this country, but the world exploded in social unrest.

And Sisson got a call from Paul Ramsour, executive director of Elpis Enterprises, an agency working with homeless youth. Elpis, located at 2161 University Ave. in St. Paul, offers internships in screen printing and woodworking to youths who have been homeless, are homeless, or are at risk of homelessness. They also have trainees in the summer who are a part of Right Track and Step-up youth programs in St. Paul and Minneapolis.

Normally, the woodworking trainees would be learning how to build birdhouses and bird feeders and then going out into the community and teaching younger children how to build them. However, due to COVID-19, all the park and recreational center workshops for this had been canceled.

An idea that came back around

But Ramsour had an idea.

He and Sisson had met years ago in a church basement, where they had both been talking about their youth projects. And Ramsour had taken a couple of the crates used to build chairs and had hung onto them.

“Paul and I had talked over the years, and he messaged me not long after the riots,” Sisson said. “Maybe it’s time to resurrect the chair project,” was Ramsour’s message.

“A couple other people had been whispering in my ear about it, also, and so I messaged Paul back and said yes, I would like to give the project to him and help him make it happen.”

And so, inner city youth are again building chairs.

The chairs are made of 5-core cedar, the same kind of wood that is used to build decks. Sisson said they can easily last 10 years, especially if they are covered and placed inside during the winter months.

The kit for each chair unfolds into two work tables on wheels. A youth center could unfold the kit, build the chairs, then fold it up and put it away. Sisson said the kits are made to be shipped. “That’s what I want to do. I really want to open source this project, and Paul is in line with that. He has kind of taken this on, with Elpis serving as the training center.

“We are trying to develop a manual that we are putting together, with pictures and diagrams of how to build the chair, so someone might be able to take this kit and set up their own workshop.”

Sisson said the initial idea was to have three workshops in the areas hardest hit by the rioting: Lake Street, North Minneapolis and St. Paul. “We would be doing the workshops outside amidst the rubble, and building from there.”

However, Sisson said he is comfortable with shifting goals if needed as long as more young people can be put to work. So the plan now is to offer the workshops at Elpis, either outside or in an upstairs space or in the woodworking shop.

“Paul has been in conversations with Ain Dah Yung,” Sisson said. That is an organization that also serves homeless youth by providing housing and other benefits. He said the Green Chair Project has also worked with corporate training, and that is also a possibility.

“If we didn’t have COVID-19 to worry about, we would probably be doing workshops like crazy right now. But we are all trying to figure out how to stay safe and distance.”

Working safely, about four to six trainees could complete the four-hour workshop and can easily build six chairs in that time. The workshops are free, and one chair is given away for every two that are sold. The profits are used to fund the workshops. There is no capacity for painting right now, so the chairs are unpainted cedar.

Sisson said that after a workshop, the youths will have a couple chairs that they can decide what to do with: display them, paint them or sell them.

“It’s good to team up a little bit,” Sisson said. “We are using my favorite model. You learn how to build something, and then you have to teach the next person how to do it.”

At this point, Elpis trainees have already started building chairs. Sisson said with their first run of 50 chairs, 22 have already been sold.

“Our chairs have gotten so much better over the years,” Sisson stated. “The quality, the size and the longevity.”

He said the development of the product has been a result of some of the people who have been involved over the years with the project. Tim Schwietzer helped design the big Adirondack chairs, which weigh over 2,000 pounds. And Mike Hoyt was involved with running the project for many years and is still involved in community art projects.

“We have the ability to extend this through the fall to the end of the year,” Ramsour added. “We would like to do that, selling the chairs to help fund the workshops we do. We have an opportunity this fall to have more interns, and they can learn to build the chairs and can then teach workshops. We are excited about the process.”

He said Elpis is also excited about helping bring back the Green Chair Project and that interns have the opportunity to work on a project that has been happening for a number of years.

“We have talked to a number of people about it, and people are interested. I think the challenge is figuring out how this works in the COVID-19 ecosystem. I think it can.”

Ramsour explained that COVID-19 can be a reason to build the chairs. “You can have the chairs out and about so people can sit and space and talk, and the chairs are good for doing all that.”

To purchase a chair or have a group sign up for a workshop, contact Elpis Enterprises at info@elpisentrprises.org or call 651-644-5080.