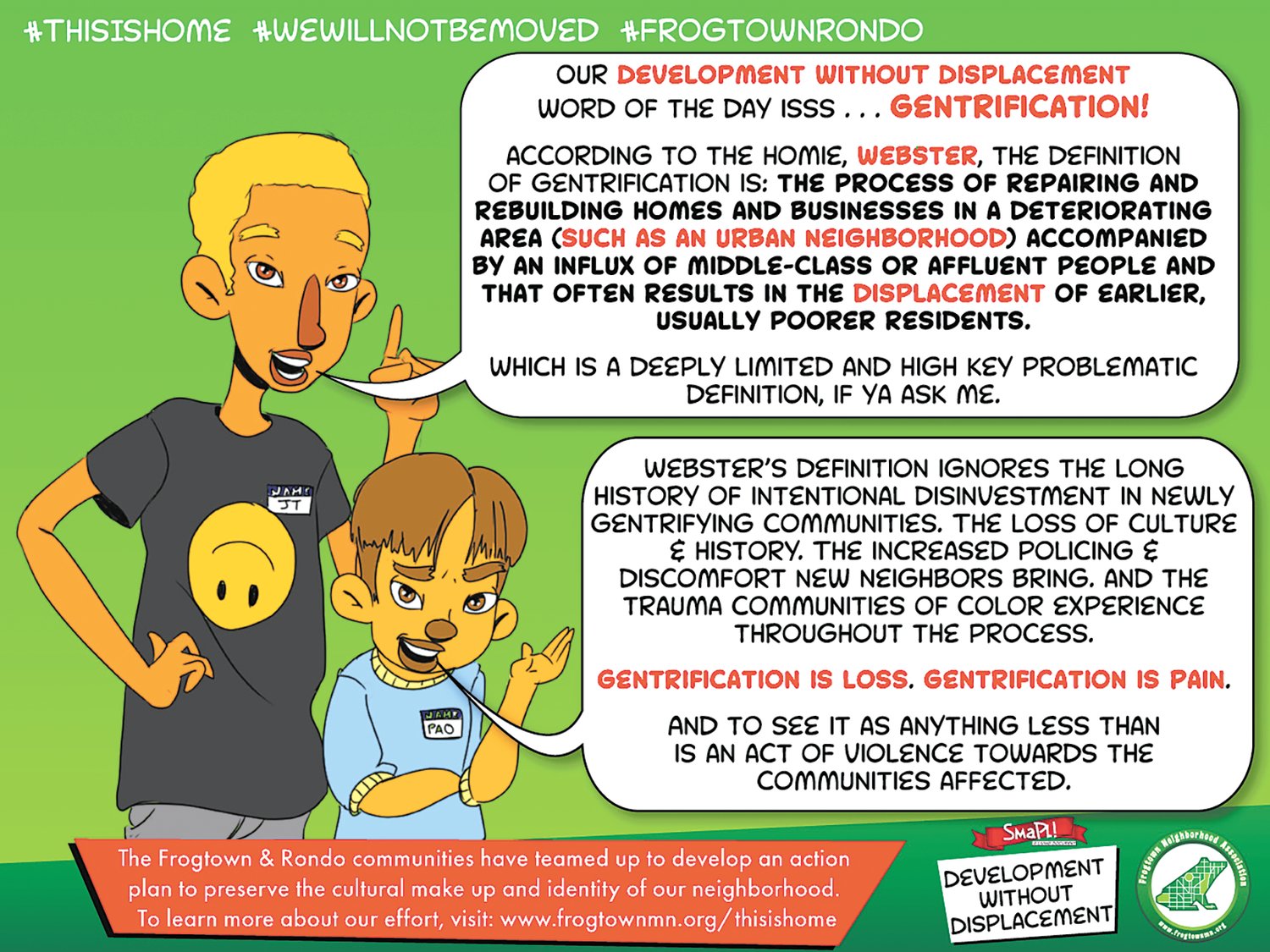 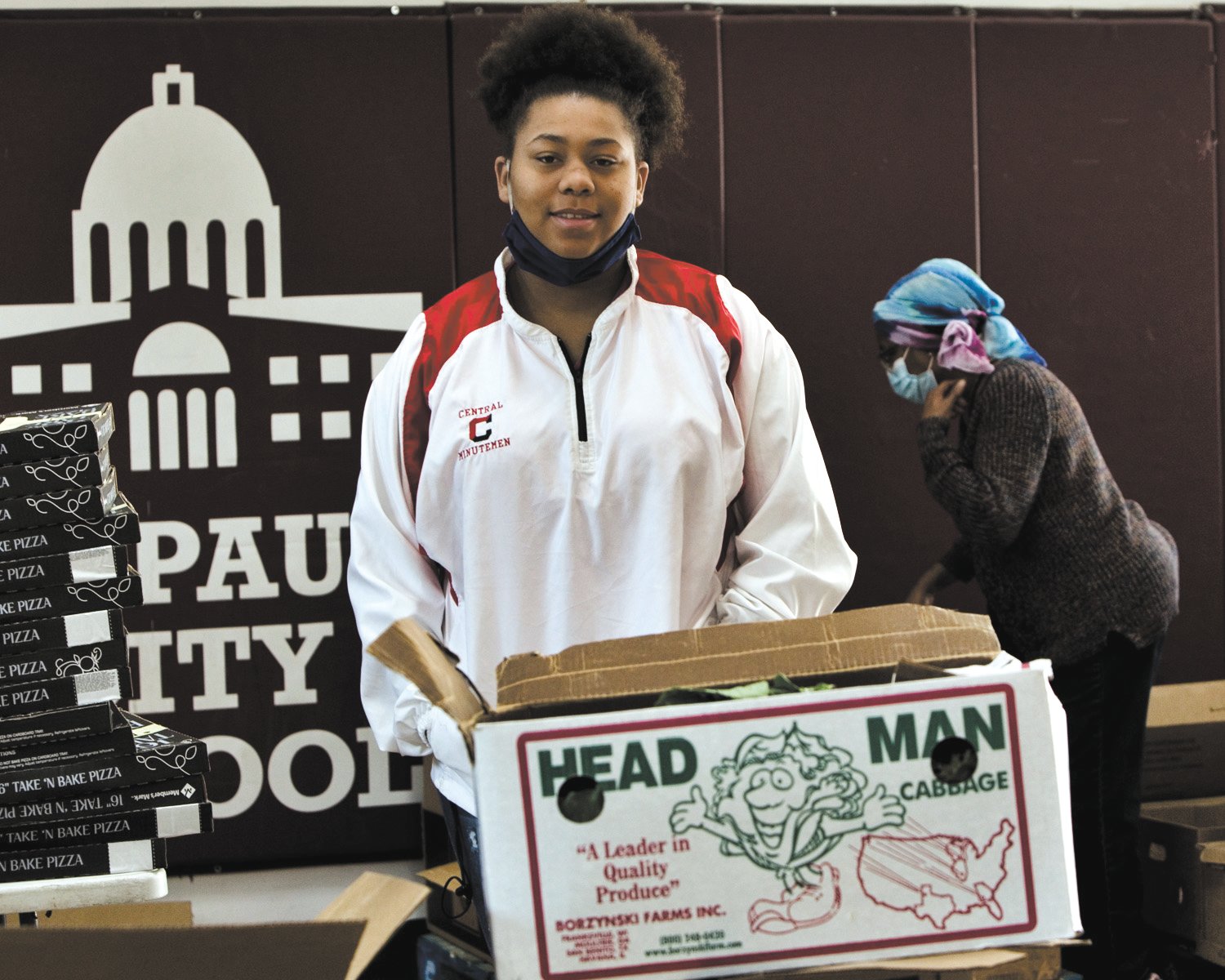 Jareen Eason-Fearson is one of many Frogtown residents who helps sort and pack food items for distribution on Friday afternoons at St. Paul City School. (Photo by Margie O’Loughlin) 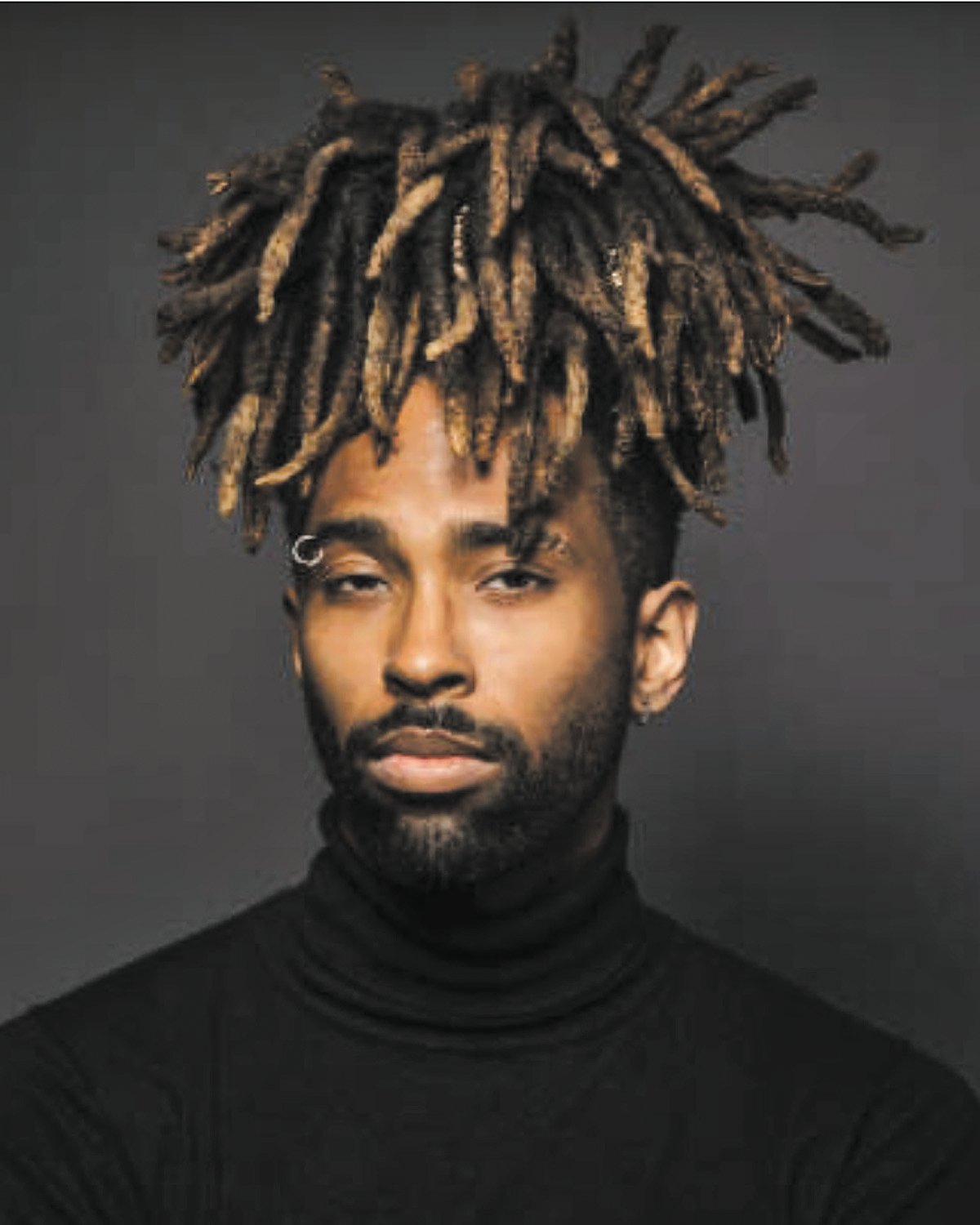 Pre-bagged and boxed foods are brought to people in their cars by volunteers. The distribution happens in the parking lot on Western Avenue behind the St. Paul City School Middle School. There will be a line of cars waiting, so plan accordingly for time. Foods include bread, produce, dairy, and meat.

According to Frogtown Neighborhood Association Co-Director Caty Royce, about 350 families are currently being served. She said, “We see many of the same families from week to week. People are relying on the weekly distribution as a major food source. We need more volunteer runners to help bring bags and boxes out, and also to help with packing (which starts each week at 1 p.m. in the school basement). Masks required; social distancing practiced.”

Mychal Batson (who goes by MycDazzle, or Daz, for short) is a young artist with a bucket load of skills, and a growing resume of projects anchored in St. Paul’s Central Corridor. His work reflects the diversity of the neighborhood he grew up in; his art gives young kids who look like him a chance to see themselves reflected.
Daz moved to Frogtown from suburban Wyoming, Minn., when he was in seventh grade. He said, “It was full-on, reverse culture shock, but the character of the Frogtown neighborhood made me the artist I am today.”
His family settled into a new life on Sherburne Ave. and Chatsworth St. back in 1999. Daz grew from a child to a young man in the St. Paul Public Schools. He graduated from Central High School’s International Baccalaureate Program, which he described as “second to none.” At Central, Daz was also an active member of the Central Touring Theater group, and theater is all about stepping out, taking risks, and hitting or missing lines.
Daz learned, early on, how to improvise.
By his own description, “a wizard with words,” he studied creative writing, poetry, and screen writing at Augsburg College. After graduating in 2010, Daz taught himself graphic design and illustration.
He said, “One of the things my formal education taught me is that I’m a very good problem solver. I used YouTube to figure out what I needed to know, including just about everything with the word Adobe in it: Adobe Illustrator, Adobe Photoshop, Adobe After Effects, Adobe Premiere, Adobe InDesign, and Adobe Lightroom.”
Mastery of these technical tools led to ongoing work as a designer, illustrator, writer, and creative consultant.

A different small area plan
The most notable projects Daz has done have been anchored in his St. Paul connections. The small area plan he created for the Frogtown Neighborhood Association (FNA) is his biggest project yet, having taken an entire year to complete.
A small area plan is an urban planning document that envisions how communities like Frogtown will evolve over the course of the next decade and beyond. Once submitted, each district council’s plan is absorbed into the city of Saint Paul’s comprehensive plan. The current cycle runs from 2020-2030.
FNA Co-Director Caty Royce said, “In 2016, we did 10 Community Healing Meals in different parts of Frogtown to bring residents together. Mychal was involved in the whole process, and he started drawing cartoons based on those conversations. Characters emerged in his drawings, and toward the end, he said, ‘Why don’t we do this project as a graphic novel?’”
What made Frogtown’s small area plan different from others, in addition to its graphic novel form, is that it was designed to be a “living document.”
A living document means that while government officials consider, approve, and implement the proposed policy recommendations, the community is on the ground taking necessary steps to achieve the goals outlined in the plan.

Development without
Displacement
The next big collaboration between Daz and the FNA is a project called Development without Displacement. Daz is using his tech skills to design an ultra-sophisticated PowerPoint (called a Prezi) on the issue of gentrification in Frogtown.
He said, “The Central Corridor of St. Paul is the heart of the city. There is so much vitality and artistry in Frogtown, the North End, Rondo, and Midway. I think of Frogtown as the last frontier in St. Paul. This next decade will be rough if we can’t figure out how to move forward without displacing the people who make our neighborhoods great. Everything depends on how much community members are willing to be engaged in the process, and COVID-19 has made engagement a lot harder.”
Other projects Daz has completed include illustrations for three children’s books: “Black Boy, Black Boy,” “Mr. Rondo’s Spirit,” and “Your Hue Looks Good on You;” an illustrated map of St. Paul’s Historic Rondo Community; a terrazzo floor designed as part of a team, and a mural of his own design for the Frogtown Community Center.
He also has a secret, large-scale public project in the works for Frogtown – but the details have not yet been released. For more information on Mychal Batson’s past, present, and future creative work, visit www/mycdazzle.com.
View the Small Area Plan designed for Frogtown at the web address above. Scroll down the left side of the screen to find the project acronym SMaPL!.

As we enter into a new year