Como seniors Kalid Ali has taken an active role in promoting political participation as interns with the League of Women Voters. (Photo submitted by Eric Erickson) 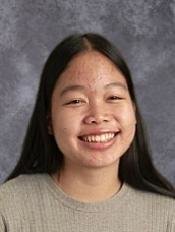 During the intensity of the 2020 General Election, many Como students took it upon themselves to participate in our democracy. Very few high school students are eligible voters, the exception being a handful who turn 18 early in their senior year.
However, 10 current Como seniors became Ramsey County student election judges and served alongside veteran judges at precincts across St. Paul on Nov. 3. Online training programs prior to election day prepared the students for a 15-hour shift in which they helped carry out tasks needed to ensure fair and legitimate elections.
Senior Fiona Hatch, who worked at North Dale Rec Center, shared that the experience has been valuable in connecting her, and those like her, to the democratic process.
“I think that young people – especially those who have not yet had the chance to vote in an election – can really benefit (by serving as an election judge) because it makes politics and current events feel real,” Hatch said.
“I found that while serving, I’ve been so much more invested in keeping up with our country’s policies and affairs because of my time as an election judge”.
Several Como alumni who were election judges in 2019’s off-year elections and 2020’s presidential primary also returned to duty at St. Paul precincts.
Two members from Como’s class of 2020 continued internships with the St. Paul League of Women Voters (LWVSP) that they began as high school seniors. Emma Wolters, who now attends the University of Minnesota, and Lila Seeba, who now attends Trinity College in Dublin, Ireland, created and implemented census outreach programs last summer.
This fall, they virtually collaborated on presentations, newsletters, and social media links to promote voter registration and turnout. In our digital and video conferencing world, their materials were shared from dorms, across town and across an ocean, to college campuses and communities in St. Paul.
Two seniors in Como’s class of 2021 also began internships with the LWVSP doing census outreach last summer. Nag Poe and Kalid Ali produced materials in Karen and Oromo to distribute within their respective communities. In September, they made presentations about political participation to senior U.S. Government classes at Como via Google Meets.
“I want my community represented,” Ali said. “Since I couldn’t vote this year I felt like registering others to vote was another way I could participate in our democratic system.”

Conference title
The Cougars football team wrapped up the St. Paul City Conference Championship before all Minnesota State High School League activities were put on pause. Como finished 4-0 in the abbreviated season, making memories during the challenges of the pandemic which will last a lifetime. It was the first conference title for the football team since 2009.