Street changes near Allianz Field please some, rile others

As Allianz Field is prepared for an April opening, neighborhood streets continue to change. A proposal to convert one block of Roy between Spruce Tree Dr. to Shields Ave. from one-way northbound to two-way status won a vote of support Jan. 2 from the Union Park District Council (UPDC), following a December recommendation from its Transportation Committee.

Although the Roy St. section eyed for change is one small block, it could mean big changes for the adjacent neighborhood. It is part of a larger residential permit parking district. The block has three houses and an apartment building on one side, and a church on the other side. The street is used for parking by the adjacent Bethlehem Lutheran Church, 436 N. Roy St., and the nearby Central Baptist Church, 420 N. Roy St.

Committee support is with conditions. One request is that parking on both sides of the Roy block is retained. The second is to improve signage to reduce motorists’ confusion. Signage on nearby University Ave. that directs motorists to turn south on Fry St. to reach Spruce Tree Dr. and avoid the busy University and Snelling avenues intersection should be looked at and possibly removed. Another request is for the city to continue to seek neighborhood input as the change moves forward.

UPDC would also like a one-year follow-up on the change so that the St. Paul Department of Public Works could determine what, if any, impacts the changes have.

A final decision on the street configuration goes to the St. Paul City Council for a public hearing and final vote. That process is expected to take about 60 days and would wrap up by the time the stadium opens. Property owners along the street will be notified before the council hearing. If the change is approved, changed street signs will go up in the spring.

Street issues tied to soccer stadium construction have been a bone of contention between city officials and UPDC. One year ago, the district council passed a resolution outlining its values for pedestrian safety at access with the stadium project. “New development in the area, and at Spruce Tree Dr. and Snelling specifically, will increase pedestrian demand at that intersection,” the resolution stated.

UPDC expressed opposition to a median fence on Snelling between University and Shields avenues, stating it is inconsistent with the high-density, pedestrian-oriented streetscape envisioned by the Snelling Station Area Plan and the Snelling Midway Redevelopment Site Master Plan. The district council called for retaining a pedestrian crossing at Source Tree Dr. and asked the city and Minnesota Department of Transportation (MnDOT) to consider a well-marked, unsignalized pedestrian crossing with a refuge median on Snelling at Spruce Tree Dr.

Instead, the city and MnDOT erected the long median and fence, with a small gate at Spruce Tree Dr. that will only be open on game days. The Spruce Tree Dr. signals came down several weeks ago. The signals at Shields were installed last week. Shields is extending east of Snelling into the Midway Center superblock bounded by Pascal St. and St. Anthony, Snelling and University avenues. Shields will extend west to Pascal and will be in front of the new stadium.

The change to Roy is part of the larger traffic plan for Allianz Field. One reason for the change is access to the Spruce Tree Centre parking ramp. Spruce Tree is at 1600 University Ave., the southwest corner of Snelling and University. Since the retail-office building opened in 1988, vehicles could access its parking ramp by turning from Snelling onto Spruce Tree Dr. But, the median and removal of signals prevents that.

The two-way street proposal generated some debate on social media. But only a few neighbors attend the Transportation Committee meeting. Joel Lawrence, senior pastor at Central Baptist Church, said that while he understands why the change was proposed, he does have concerns. One issue is retention of on-street parking, which both churches use on Sundays. Stiffler said parking would remain. Roy in that block is about 32 feet wide.

Lawrence also said better signage is needed, as well as attention to traffic speeds. Committee members agreed and asked Public Works to monitor those issues after the change is approved.

The change on Roy from two-way to one-way was made in 1967 by City Council ordinance. Stiffler said records don’t show why the change was made. Committee member and lifelong St. Paul resident Pete Clasen said the change was made in response to the construction of Interstate 94 so that Roy wouldn’t become a cut-through street for motorists seeking a faster route to the interstate. Roy’s current south end configuration wouldn’t allow for easy freeway access.

Another issue the committee discussed was Spruce Tree Dr. use. Since 1988 Spruce Tree Dr. has functioned as a bypass for motorists. Those traveling east on University or north on Snelling used Spruce Tree Dr. to avoid the Snelling-University intersection, which has long ranked as one of the busiest and most polluted in the state. The turning movement from northbound Snelling is now cut off with the median. The southbound turn to Snelling is made more challenging with the removal of the traffic light. 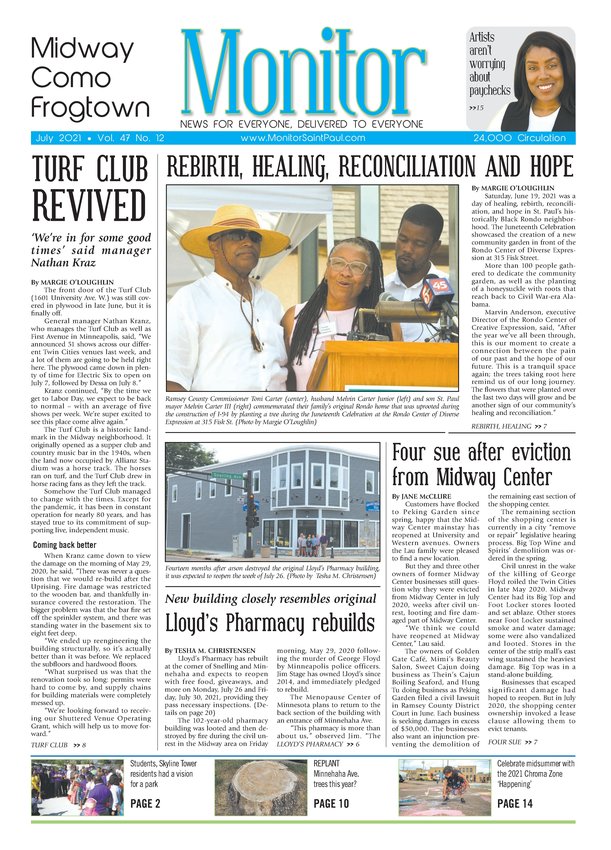