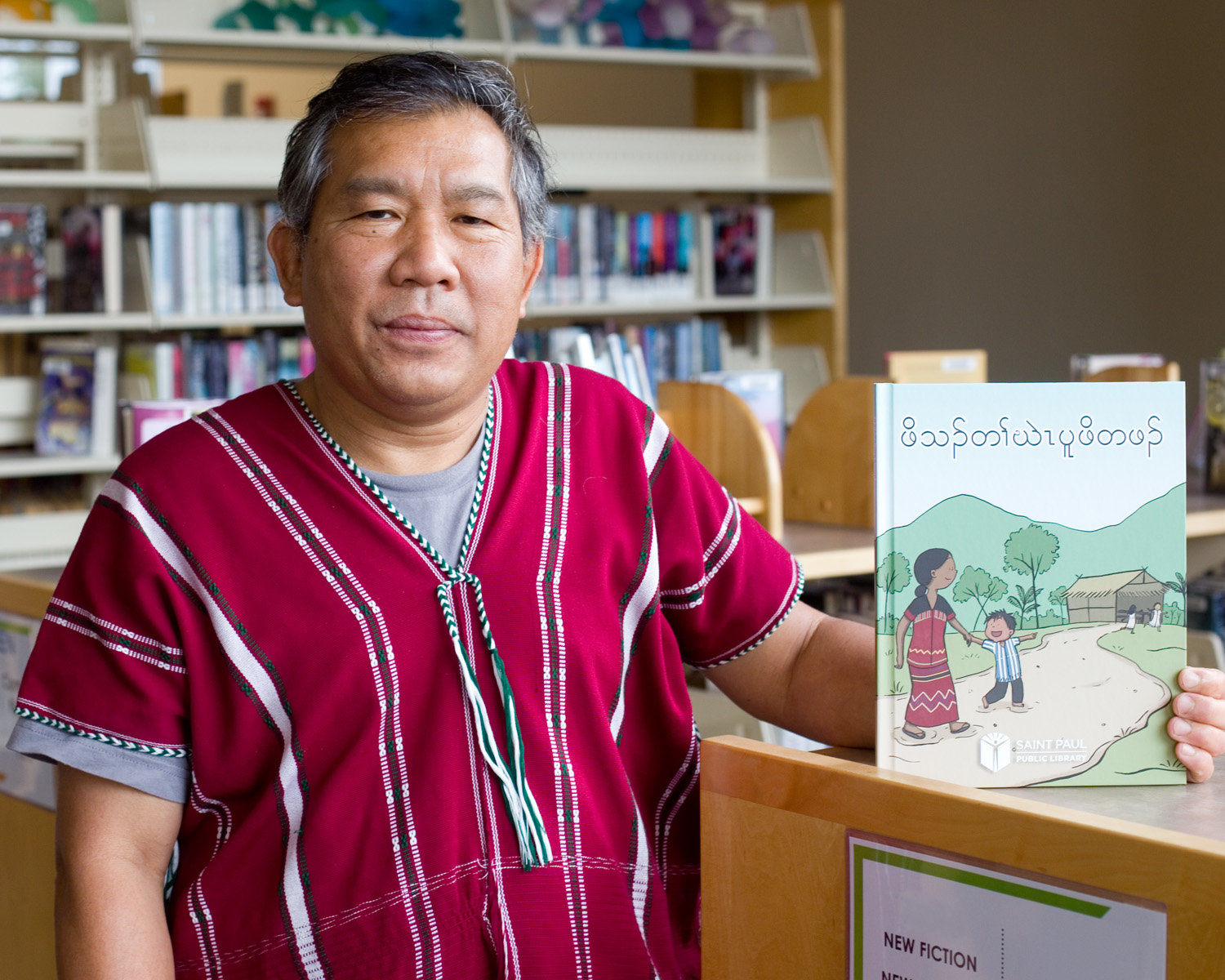 Thay Sai Htoo is one of five local writers who contributed to a book recently published by the Saint Paul Public Library called “Children’s Stories.” The book adds to the body of literature available in the S’gaw Karen language. (Photo by Margie O’Loughlin) 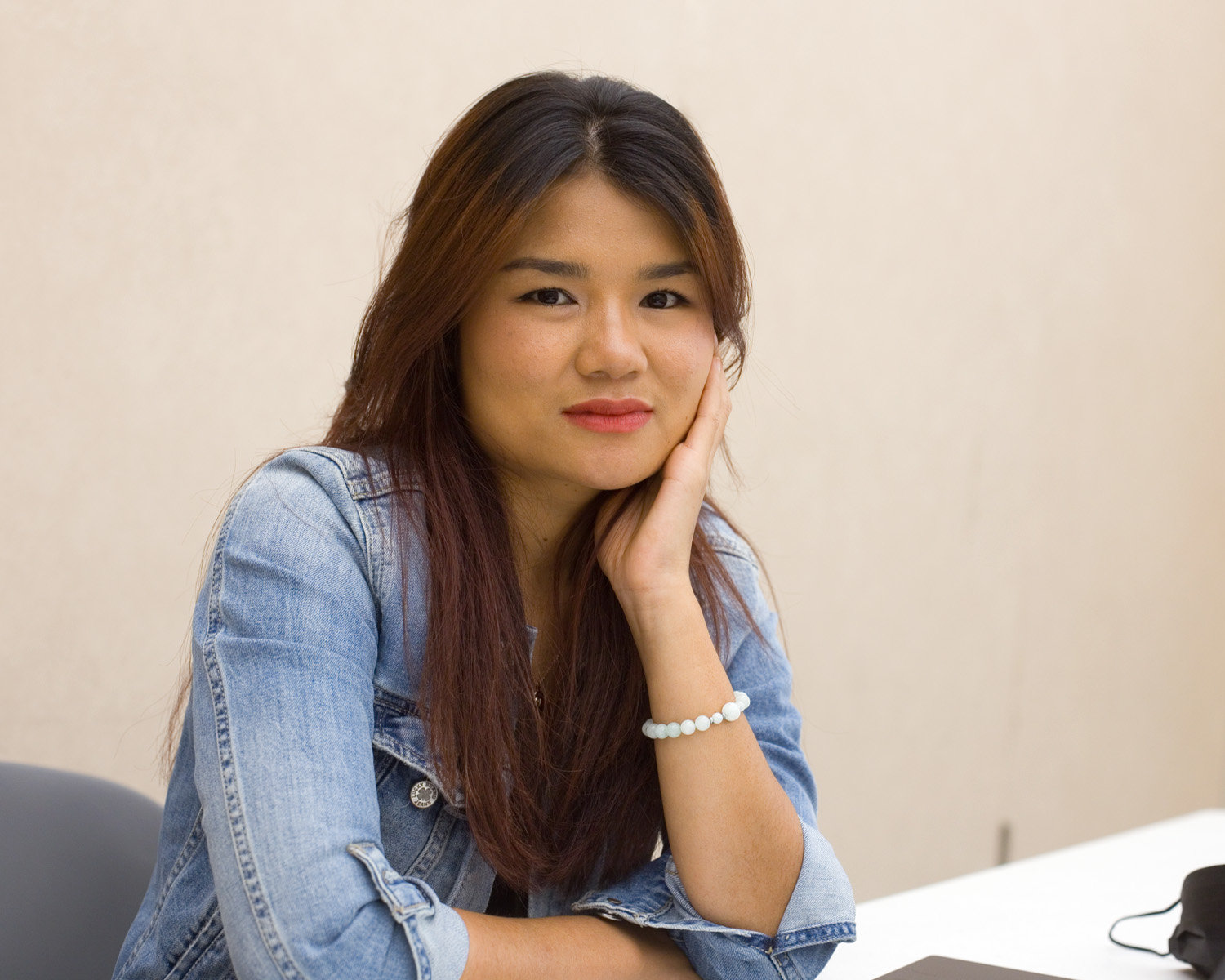 SPPL Karen Community Specialist Jenny Ayechit, said, “Now Karen parents can read a collection of stories to their children, and children can see a book written in their own language.” (Photo by Margie O’Loughlin)
Previous Next
Posted Friday, November 12, 2021 10:06 pm

To hear Karen spoken at the event, to have a book in our language – we feel that the city of Saint Paul has validated us.””
Jenny Ayechit

We couldn’t have ventured into book publishing, or continued our deep community engagement work during a pandemic, without the support of The Friends of the Saint Paul Public Library and its funders.””
Rebecca Ryan
By MARGIE O’LOUGHLIN

Growing up with a father who was a storyteller, Thay Sai Htoo fondly remembers the stories of his childhood.
Htoo was born in the Karen State in Myanmar, the Southeast Asian country formerly known as Burma, and is a member of the local Karen community. Myanmar has seven major ethnic groups, one of which is the Karen.
The Karen people have been persecuted by the Burmese government for decades. According to the Karen Organization of Minnesota, there are approximately 17,000 Karen refugees living in the state. Saint Paul has the largest and fastest-growing Karen population in the U.S.
Thay Sai Htoo and his family fled their home in Myanmar when he was a teenager. When the political violence and unrest there became unbearable, they sought shelter in a refugee camp along the Myanmar-Thai border to await an uncertain future. Although Htoo carried very little, he did bring his father’s stories with him. He has been a resident of Saint Paul for 10 years now – with those stories still intact.

Innovative project
Recognizing the need for Karen children to have access to books in their native language, the Saint Paul Public Library (SPPL) launched an innovative project six years ago.
In 2015, two Karen children’s books were published, called “Elephant Huggy” and “The Hen and the Badger.” A community gathering at Arlington Hills Community Center on Oct. 9, 2021, launched a third.
Present for the book launch and celebration were Saint Paul Mayor Melvin Carter III, SPPL Director Catherine Penkert, Senator Foung Hawj, Councilmember and Library Board Chair Jane Prince, and Chris Xiong from council member Nelsie Yang’s office.
“Children’s Stories” was created in partnership with five local writers from the Karen community, including Thay Sai Htoo. For his contribution, he retold a story from his childhood called, “Rabbit the Peacemaker.” The other contributors are Eh Htee, Doh Saul Lu, Lay Lay, and Ta Mla with original color illustrations by Duachaka Her. The book adds to the body of literature available in the S’gaw Karen language.
The writers and library staff worked with community members in Saint Paul to identify which stories would be included. Some of the stories are based on folk tales and fables that Karen parents and elders commonly share with their children.

SPPL building bridges
Jenny Ayechit is a Karen Community Specialist at SPPL. She works directly with the Karen community, as part of the library’s Community Services program. She said, “I’m very excited to have a third book in the S’Gaw Karen language for children. There aren’t a lot of books for parents in the Karen community who don’t read English, so having more books in our language is something that I’m proud of. Now parents can read a book to their children, and children can hold a book written in their own language.”
Ayechit was also born in Myanmar. She said, “I feel that my job is to be a bridge between the Karen people and the broader community. About 250 people attended the book launch. To hear Karen spoken at the event, to have a book in our language – we feel that the city of Saint Paul has validated us.”
SPPL published 5,000 copies of “Children’s Stories.” Copies will be added to the SPPL’s collection and distributed to local schools and Karen organizations. A limited number of copies for community members are available at library locations throughout Saint Paul.
The library is committed to developing materials that support Karen children’s early literacy and school success, and to serve the city’s growing Karen population.

Consider the lives of children
Jenny Ayechit described her own childhood by saying, “I don’t know exactly where I was born. We lived in several places along the Thai-Burmese border. Both of my parents were teachers in the jungle, and traveled from village to village. We lived in a war zone. Things got very difficult for our family, and harder still after my dad stepped on a landmine and became disabled. We lived in a refugee cap on the Thai border for two years, and then in Bangkok. I was seven years old when my parents applied for asylum status. We waited for five years in Bangkok before coming to Saint Paul in 2005. My whole family came: two brothers, two sisters, my Mom, Dad, and me.”

Language is crucial
Rebecca Ryan is the SPPL Public Services Manager. She said, “For those who are wondering, it is unusual for a library to serve as a publisher of books. We did this because we have such a strong relationship with the Karen community. We’ve offered story hours for young children in different languages for years. Prior to the pandemic, our Arlington Hills, Rondo and Rice Street branches all had programming in Karen, which were received very enthusiastically.
“In these challenging times, our Karen Community Specialists have done a fantastic job of pivoting to virtual programming. They got the Karen story times and conversation circles (where adults can practice their English) up and running very quickly.
“We couldn’t have ventured into book publishing, or continued our deep community engagement work during a pandemic, without the support of The Friends of the Saint Paul Public Library and its funders.”
The project was made possible with support from Sandra Schloff; The Clara and Frieda Claussen & Eleanor Hermann Endowment Fund; Bruce Vento & Paul Wellstone Fund; Hubbs Endowment; Libraries Without Borders’ Wash & Learn Initiative; Minnesota Art and Cultural Heritage Funds; and The Friends of the Saint Paul Public Library.
There are 13 library locations across Saint Paul, and a Bookmobile. Materials can be searched and reserved online at www.sppl.org.