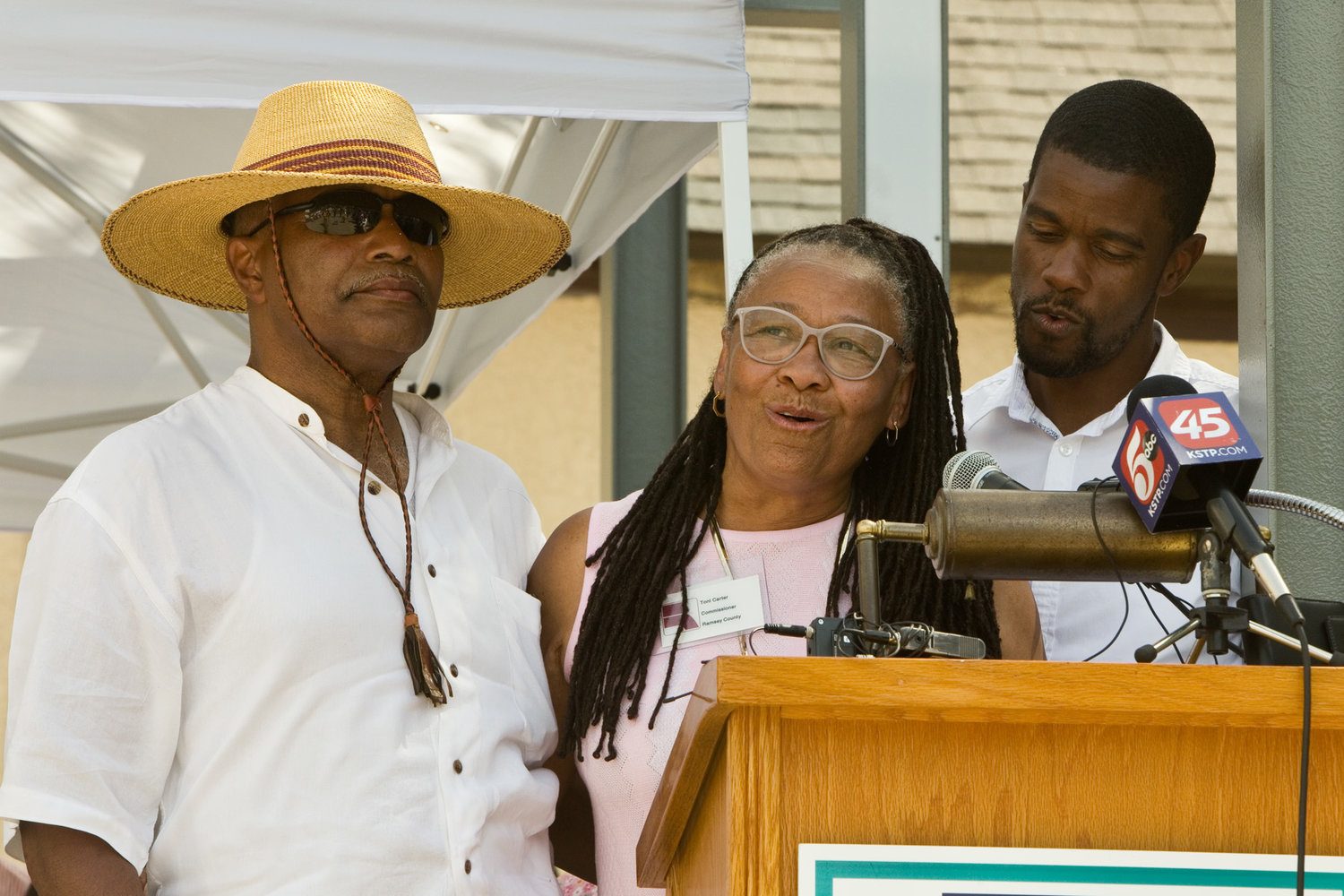 Ramsey County Commissioner Toni Carter (center), husband Melvin Carter Junior (left) and son St. Paul mayor Melvin Carter III (right) commemorated their family’s original Rondo home that was uprooted during the construction of I-94 by planting a tree during the Juneteenth Celebration at the Rondo Center of Diverse Expression at 315 Fisk St. (Photo by Margie O’Loughlin) 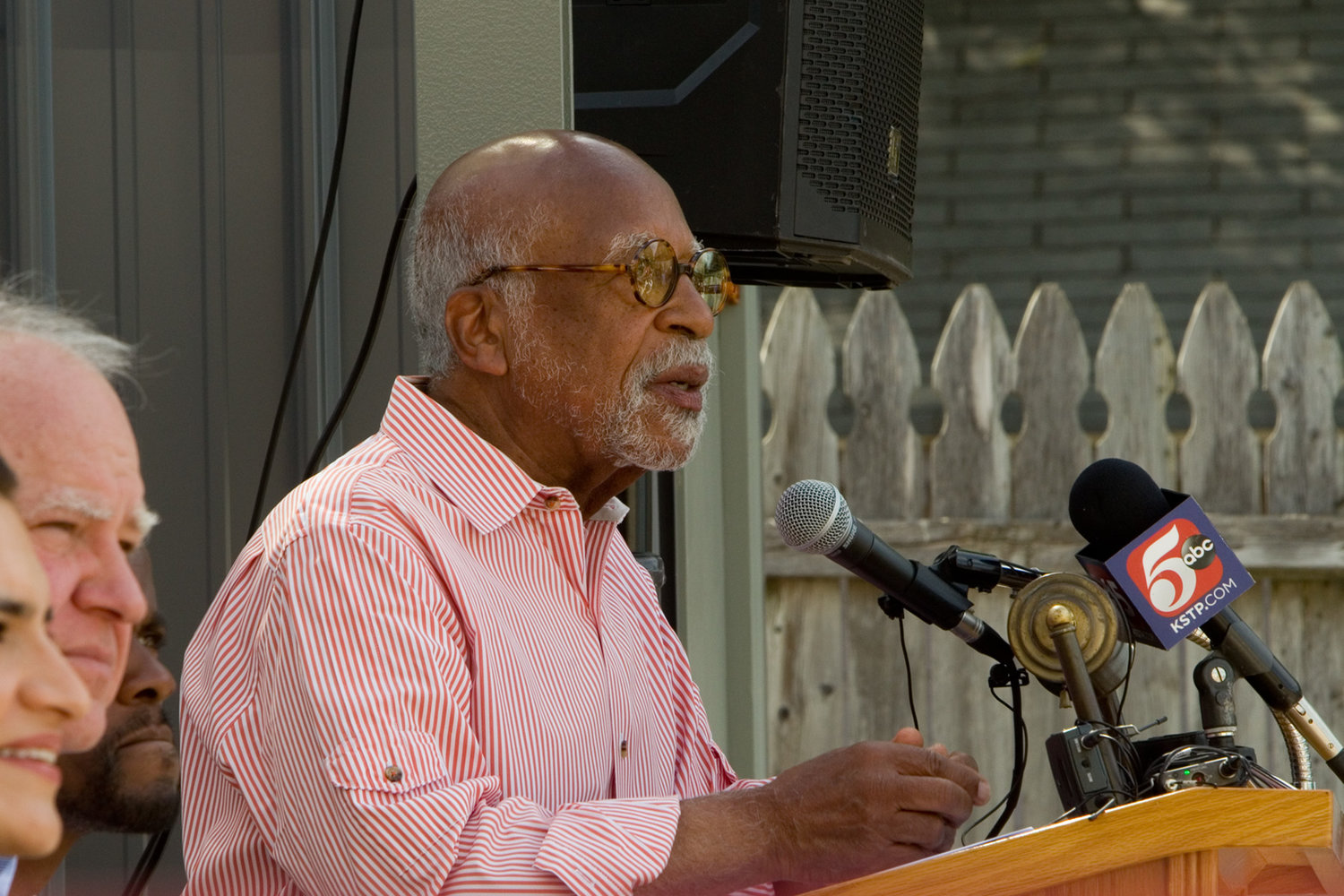 Rondo Center of Creative Expression Executive Director Marvin Anderson said, “The flowers that were planted over the last two days will grow and be another sign of our community’s healing and reconciliation.” At left are Lt. Governor Peggy Flanagan and Governor Tim Walz. (Photo by Margie O’Loughlin) 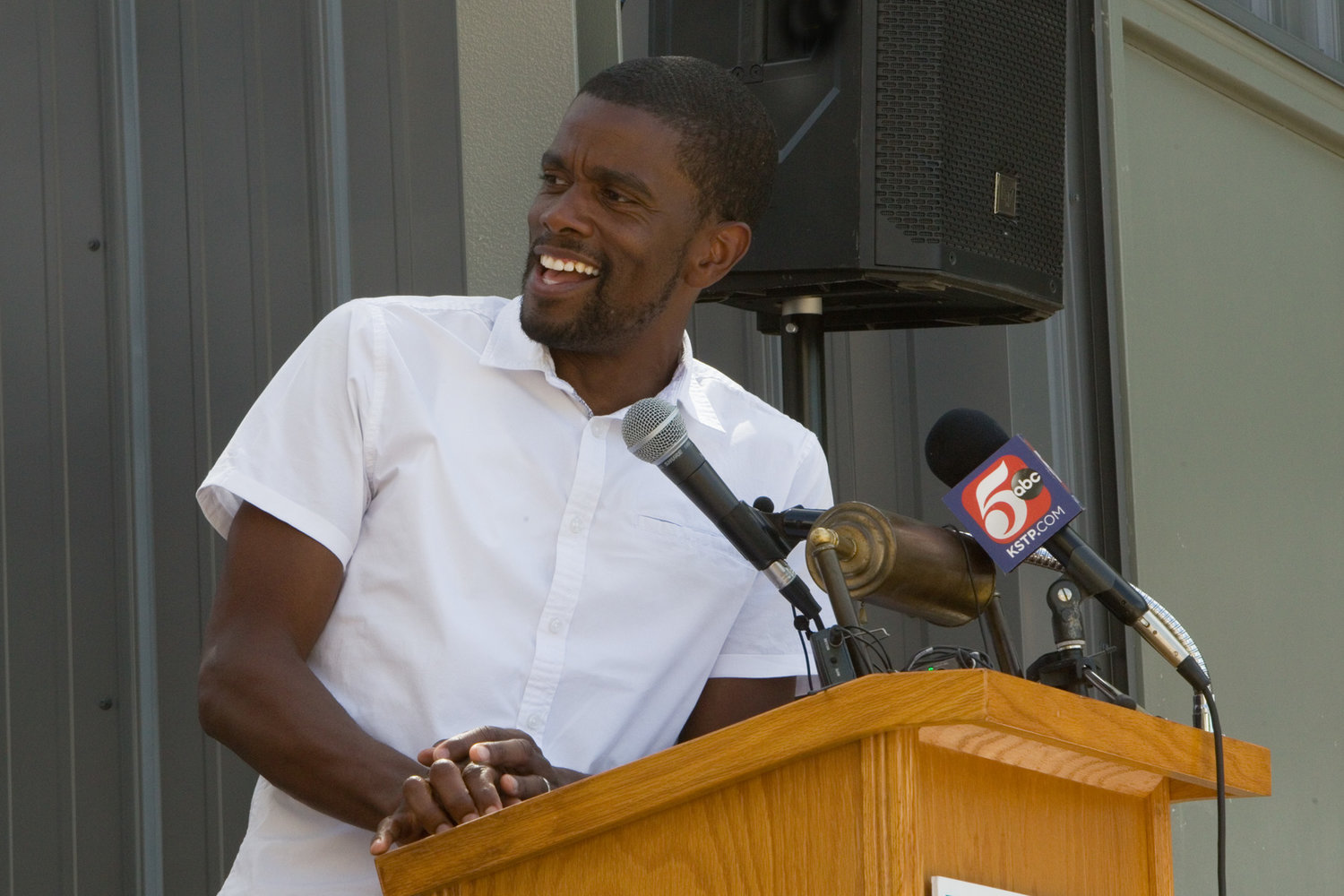 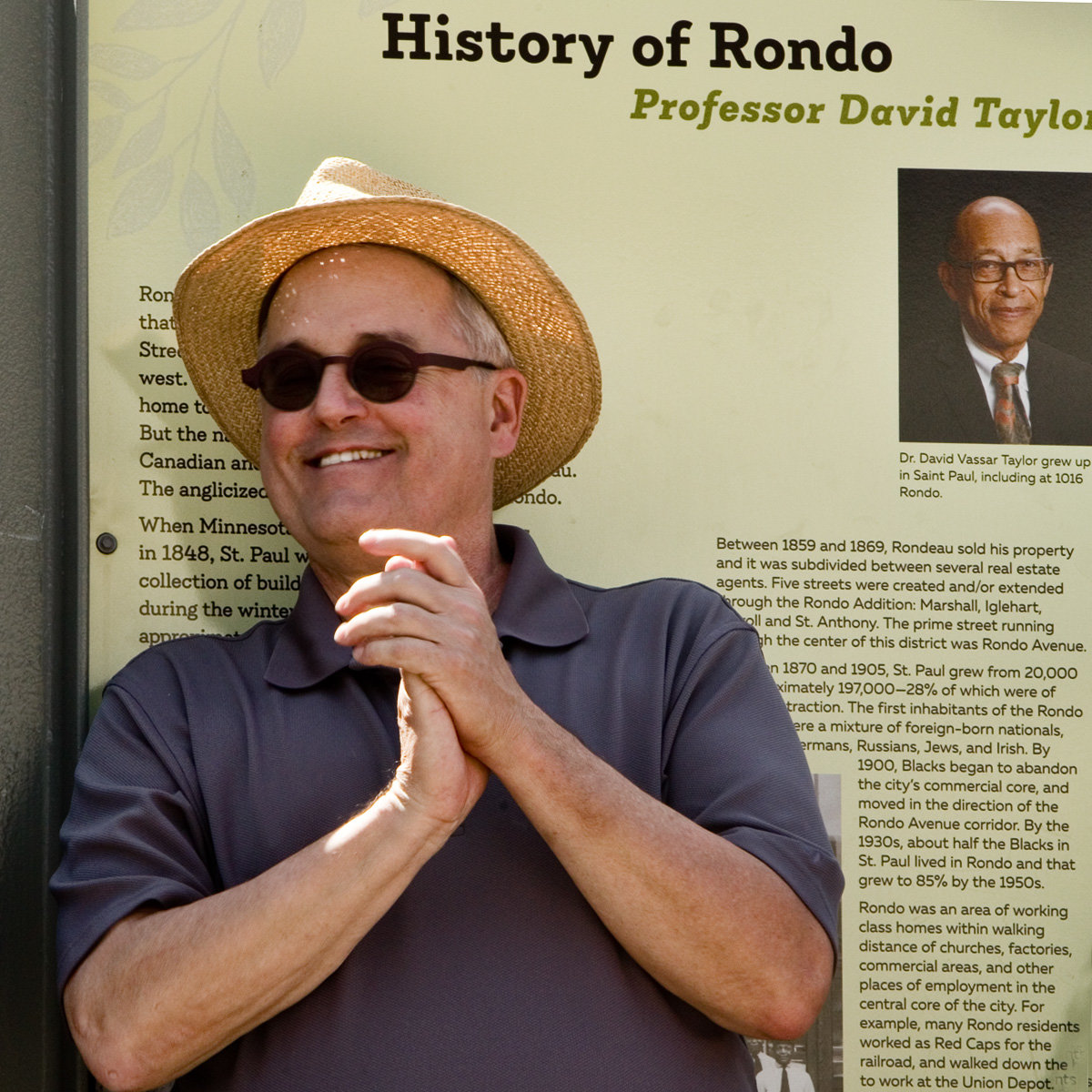 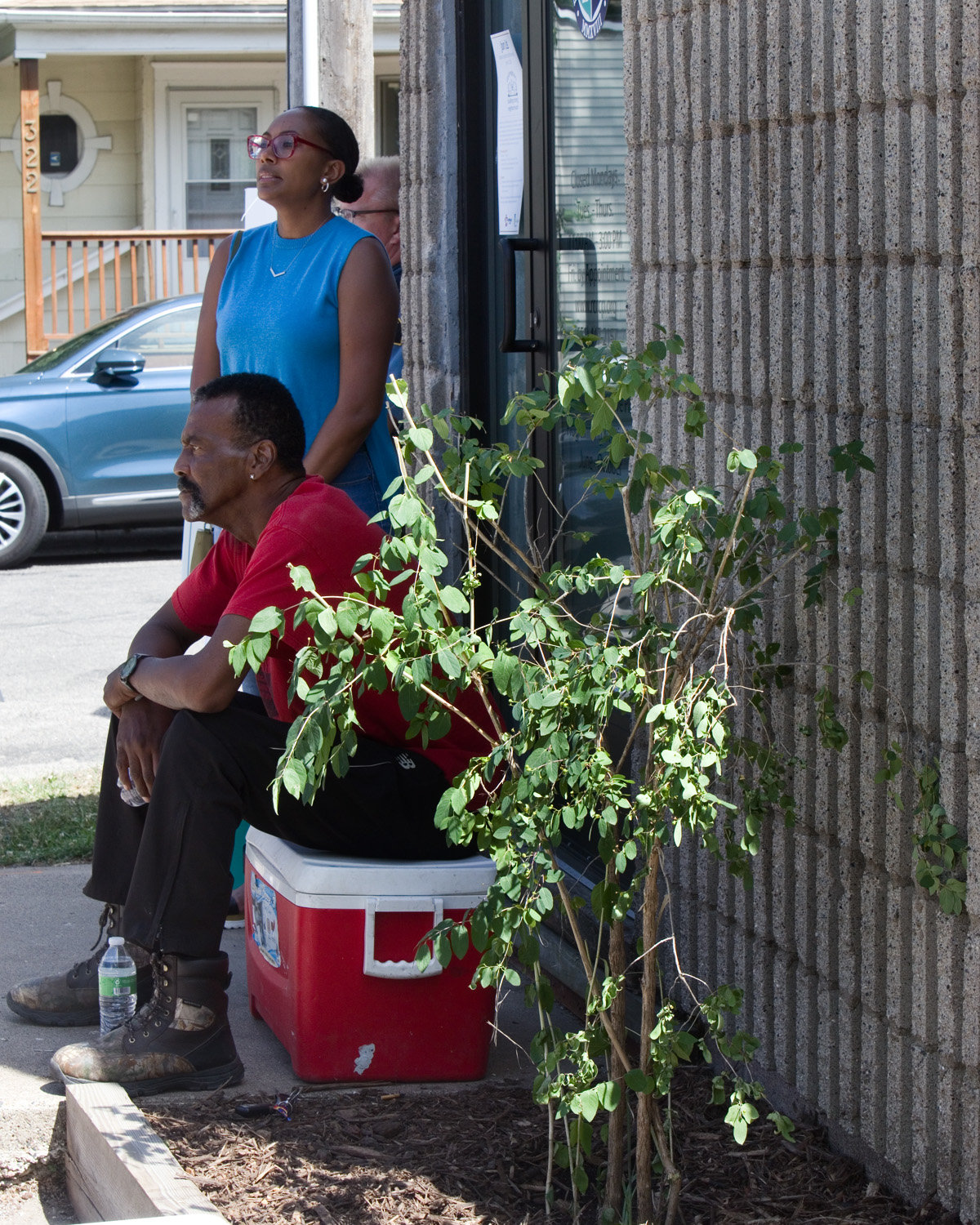 This honeysuckle was brought to Minnesota over 150 years ago by a Union soldier who left the confederate state of Alabama after the Civil War and settled in Rondo. (Photo by Margie O’Loughlin) 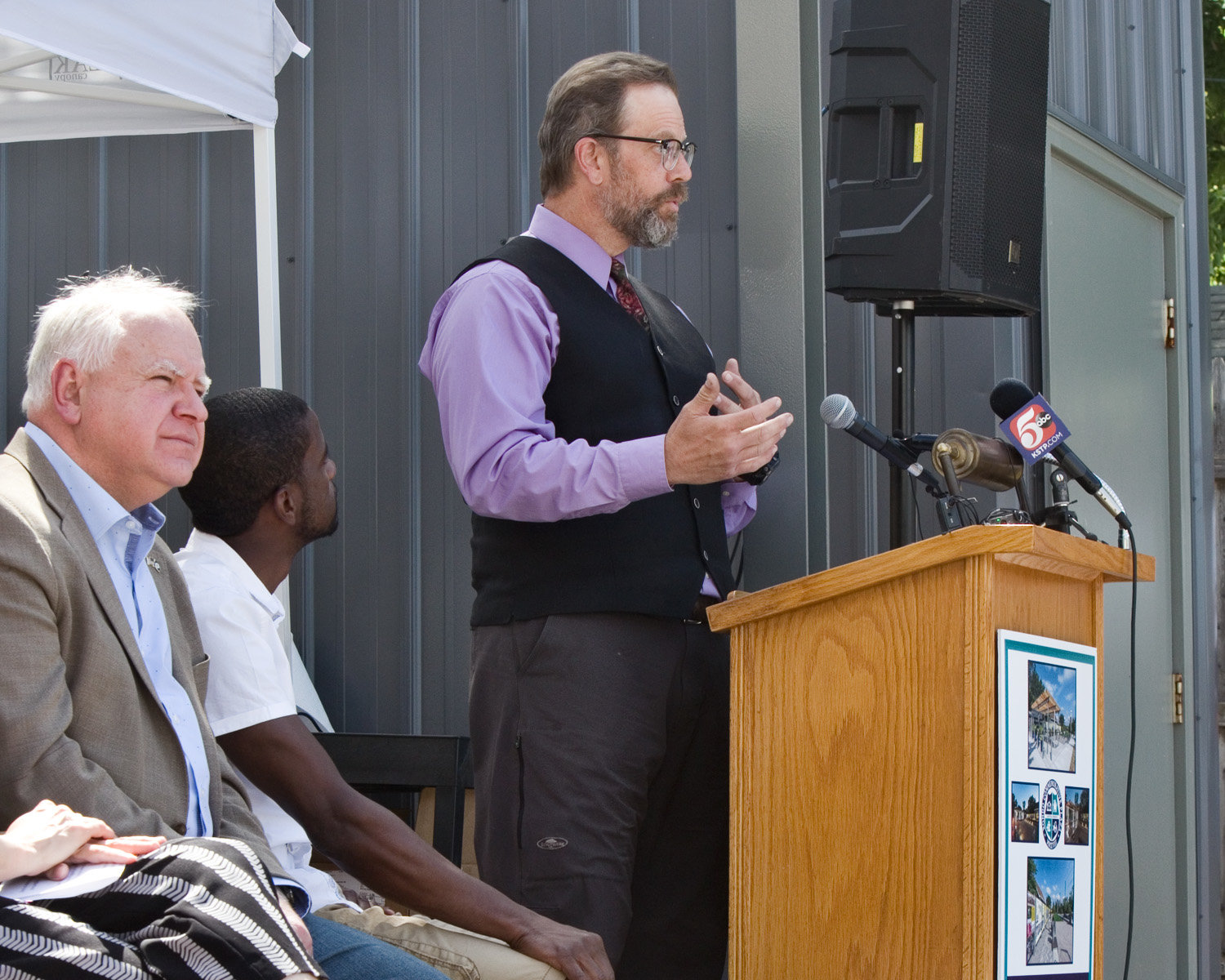 With the help of St. Paul Arborist and University of Minnesota professor Chad Giblin, a portion of a 150-year-old honeysuckle lives on at the Rondo Center of Diverse Expression. (Photo by Margie O’Loughlin) 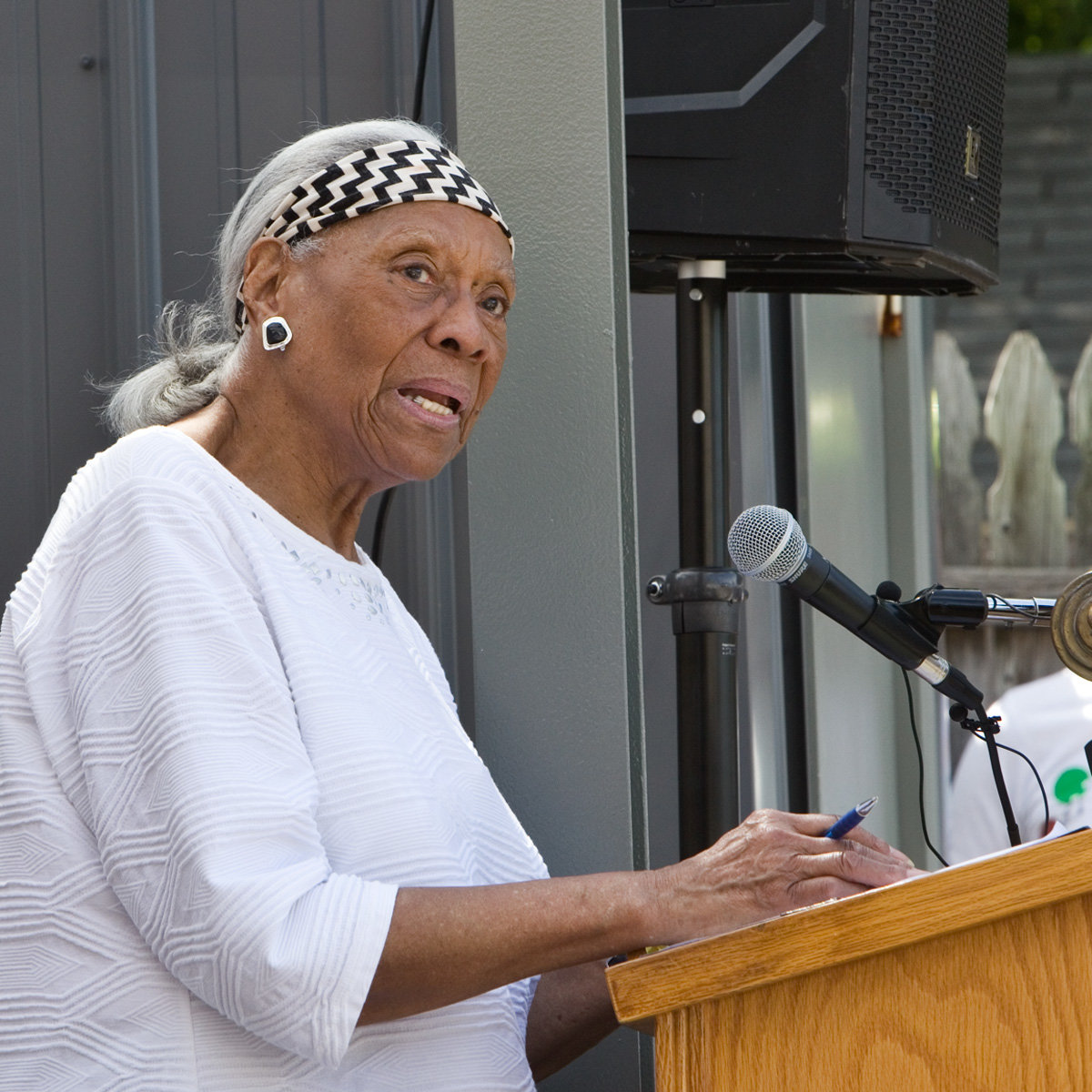 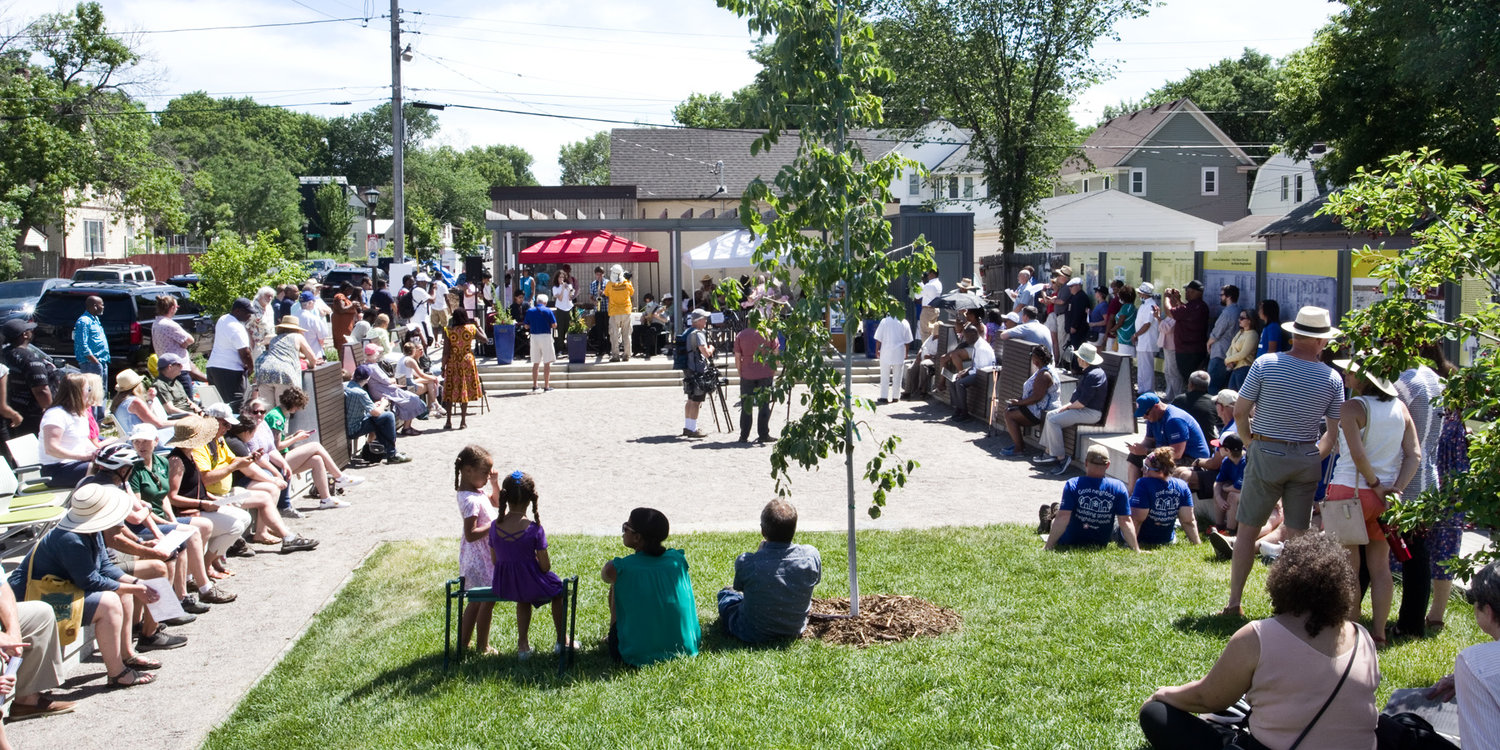 Saturday, June 19, 2021 was a day of healing, rebirth, reconciliation, and hope in St. Paul’s historically Black Rondo neighborhood. The Juneteenth Celebration showcased the creation of a new community garden in front of the Rondo Center of Diverse Expression at 315 Fisk Street.
More than 100 people gathered to dedicate the community garden, as well as the planting of a honeysuckle with roots that reach back to Civil War-era Alabama.
Marvin Anderson, executive Director of the Rondo Center of Creative Expression, said, “After the year we’ve all been through, this is our moment to create a connection between the pain of our past and the hope of our future. This is a tranquil space again; the trees taking root here remind us of our long journey. The flowers that were planted over the last two days will grow and be another sign of our community’s healing and reconciliation.”

St. Paul Mayor Melvin Carter III was present along with many dignitaries including Minnesota Governor Tim Walz, Minnesota Lieutenant Governor Peggy Flanagan, Minnesota Congresswoman Betty McCollum, St. Paul Mayor Melvin Carter, ReConnect Rondo Board Chair Marvin Anderson, Chair of the Ramsey County Board of Commissioners Toni Carter, City Councilmember Dai Thao, Minnesota Senator Sandra Pappas, Minnesota Senator Erin Murphy, Minnesota Representative Rena Moran, and St. Paul Police Commissioner Todd Axtell.
Among the first speakers at the podium was Rondo resident Pearl Mitchell Jackson.
Ms. Jackson’s Uncle Jim was responsible for bringing a slip of the original honeysuckle to Minnesota 150+ years ago. He served in the Civil War as a Union soldier, and once the war ended – realized he could no longer continue living in the confederate state of Alabama. He made his way north to Minnesota, where the honeysuckle was planted in a Rondo yard. With the help of St. Paul arborist and University of Minnesota professor Chad Giblin, a portion of the honeysuckle lives on at the Rondo Center of Diverse Expression, adjacent to the Rondo Commemorative Plaza.
Mayor Carter opened his mid-afternoon remarks with a greeting of, “Good morning!” He continued, “I know it’s 3:00 in the afternoon, but I’m still saying ‘Good morning!’ because a new day is here.”
Sixty volunteers from Republic Services and community members had spent the two previous days digging, planting, mulching, and watering in hundreds of perennials that make up the new Rondo Community Garden. A $150,000 grant from the Republic Services Charitable Foundation made possible the purchase of plant materials. The revitalized community space will be a place to gather, perform, recreate, and celebrate cultural heritage.