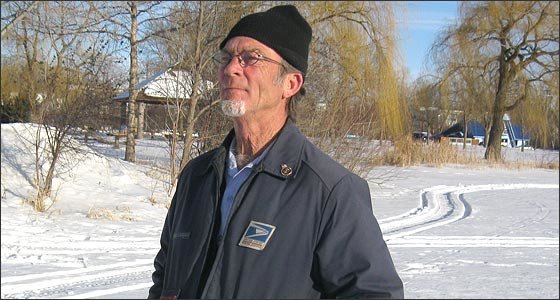 When he retires on March 30 after 31 years as a letter carrier, Gary Fitch, 61, is not going to sit back, put his legs up, and watch television. Instead, he is going to keep on walking. In April 2014, Fitch is planning a walk from International Falls to St. Paul to raise funds to end hunger in Minnesota. (Photo by Jan Willms)

Instead, he is going to keep on walking. In April 2014, Fitch is planning a walk from International Falls to St. Paul to raise funds to end hunger in Minnesota. His 12-mile route around Como Lake with the Arlington Branch Post Office has given him lots of practice.

But he hopes to have others join him in this trek. Fellow union members, athletes, politicians, celebrities and everyone who has a job and can take a day off are invited to walk for part of the journey.

Fitch is not a novice when it comes to promoting a cause, although in the past he has mainly biked across country.

“Forty years ago I was in the Marine Corps, and I should have died,” the gravelly-voiced, slender postman recalled in a recent interview. He was serving in Memphis, TN, when a drunk driver ran him off the road.

“I had 169 stitches in my face,” he said. “And they weren’t sure if my right leg would ever function. I was in a coma for a week. My family came down, and I didn’t even recognize them.”

“But being a Marine, I got myself back in shape,” Fitch said. “I needed to give thanks to somebody. So I hooked up with Danny Thomas and the St. Jude Foundation.” He set up a bike ride from St. Paul to Memphis in 1974 with St. Judes, and he also was honoring a young cousin who died from leukemia.

Fitch later received a call from the Ronald McDonald House, where a little boy wanted him to deliver a letter to the president. “It took me two years,” Fitch explained, “and he died six months before I got on the road. But I delivered his letter and 4,000 others from children who were ill to President George H.W. Bush in 1989.”

After the tsunami in 2004 that swept so many people to their deaths, Fitch again felt he needed to do something. He talked with officials at NASA and Sue Anderson, from NASA’s education department. He gathered letters with hopes and dreams, mostly from children, but also from adults, on a bike trip from Seattle to Washington, DC, in 2007.

“I talked to elementary kids in the Twin Cities and got 1700 letters from here,” he noted. By the time he finished his bike trip, he ended up with 23,651 letters describing people’s wishes. It took seven months to get the letters on a flash drive, and that flash drive went up on the Atlantis in 2009.

NASA sent him pictures, and explained that the letters would circle the globe 92 times. “I told the kids they put a circle of hope around earth 92 times. What next?” Fitch said.

What has come next has been his concern for the children in the Twin Cities who go to bed hungry every night. And because he does what he does, Fitch has decided to do something about it.

He has sat down with a number of people and talked about his goal, raising enough money to buy 10 million pounds of food. The interest from the funds raised will keep the state hunger-free forever, according to Fitch.

He has given himself a year to prepare for this. “If I weren’t planning this walk, I would never have retired,” Fitch noted. But he hopes to spend the next year meeting and talking with people.

“It’s a grass roots labor movement,” he explained. He hopes to represent 385,000 union members. He belongs to Branch 28 of the National Association of Letter Carriers. He has spoken with the AFL-CIO, and hopes to talk to St. Paul and Minneapolis unions in the coming months.

“I’m getting really good at this,” Fitch said with a smile. “For some reason, I feel the people around me when I am talking. And I want to ask everybody who knows anybody to put me in touch with them.”

Fitch said he lives paycheck to paycheck like everyone else. But his pension will cover his house payments. He is going to need help with gas expenses.

“If people understand the principle behind this, everyone will come on board,” Fitch stated. “It’s just a matter of reaching as many people as I can over the next year.”

He said everything else he has done has been on a moral level. “My heart is in this, also,” Fitch affirmed, “but we have a monetary goal with this one. And it will be so little out of anyone’s pockets.”

He reflected that life has been good to him. “I have a roof over my head and a full belly,” he said. “But I should have died back in 1971, and I refuse to take anything for granted. I want to help everyone in Minnesota perform this miracle.” For further information about the walk to end hunger, go to www.minnesotamiracle.com