Over 4,000 people weighed in on city’s new pedestrian plan 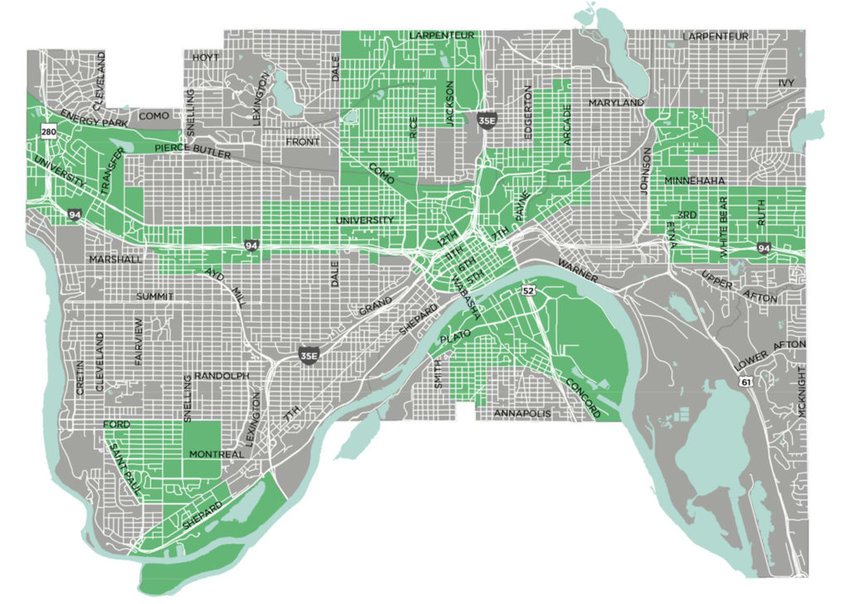 This map, from the Saint Paul Pedestrian Plan Executive Summary, shows the areas (in green) where High Priority Areas for Walking Investments are proposed. Almost the entire West Midway is highlighted. (Photo provided)

St. Paul has 1,080 miles of sidewalks, and 330 miles of roads without sidewalks

Steps to improve conditions for St. Paul pedestrians are the focus of the city’s first-ever pedestrian plan. The plan will be released Dec. 14 by the St. Paul Planning Commission. The release marks the start of a 30-day public comment period, with a public hearing set for Feb. 8, 2019.

A Planning Commission recommendation goes to the City Council for final approval, with March 2019 eyed as a possible public hearing date. The plan will become part of the city’s comprehensive plan.

Having a plan in place for sidewalks, trails and street crossings reflects the city’s values, Simer said. The plan calls out infrastructure needs as well and can guide funding city spending decisions. “It also can start conversations and change the culture of the city to promote walking,” she said

City officials hear strong support for pedestrian improvements, including sidewalks where none exist and safer street crossings. Mayor Melvin Carter’s 2019 budget includes $1 million for sidewalks, which is about double past spending.

St. Paul has 1,080 miles of sidewalks. Only about six to eight miles are replaced each year, meaning many sidewalks are in poor condition. What is more concerning is the number of areas without sidewalks at all. The city has only required sidewalks with street paving projects or new developments since 2017, meaning some neighborhoods have been able to opt out if residents didn’t want sidewalks.

Simer said the city has about 330 miles of sidewalk gaps. Included in the gaps are 62 miles of busy arterial streets, which can be dangerous to walk along or cross.

The 91-page pedestrian plan has been in the works for more than a year, including open houses, surveys, and focus group meetings. More than 4,000 people weighed in. A 26-member steering committee was also involved.

A map showing sidewalk gaps and high priority areas for walking investments is one key outcome of the plan. Neighborhoods along Green Line light rail are cited for their lack of sidewalks. That’s despite a program during rail construction that emphasized creating more pedestrian connections to and from rail and rail stations. Neighborhoods in the west midway also lack sidewalks.

The areas mapped out were chosen using several criteria, Simer said. One is equity, and looking at neighborhoods where people may rely on walking the most. Another is safety, where streets are busiest. Four-lane and arterial streets are some of the toughest to get across on foot. Census tracts and data including transit access, population, health and employment density are other factors. City staff also looked at areas where there aren’t sidewalks.

Those at the November open house and Transportation Committee members expressed enthusiasm for the plan, although many issues were raised. Several people cited the need for ongoing funding for sidewalk and crosswalk safety improvements, not just to make the improvements but to provide ongoing maintenance. Others raised the needs for better street lighting for nighttime walking, as well as better snow and ice removal.

“I love the plan so far,” said Transportation Committee member Kevin Gallatin. He and other committee members would like to see more details on how the plan and the city’s street design policy tie together. That can be added as the plan continues through the review process.

Safe crosswalks are another issue, especially on busier and wider streets. “Motor vehicle speeds and crossing distances are the biggest threats to pedestrian safety,” said Simer. “We don’t want there to be streets in St. Paul that people cannot get across.”

Snow and ice on sidewalks were raised frequently as problematic. While about 80 percent of walks are cleared after the city sends letters to property owners, that still takes filing a complaint. One challenge is that there aren’t citywide programs to assist people who need help shoveling snow.

Property owners must remove snow and ice from sidewalks within 24 hours of the end of a snowfall.

One issue that has dominated recent discussions is that of funding. “Funding has been a big challenge” for those seeking sidewalks to be installed or repaired, said Simer. Sidewalks in the past have been funded through a combination of property owner assessments, city funding or outside grants.

The plan also includes a focus on four pedestrian programs the city is involved in.

Stop for Me is a targeted effort to promote safe crossings and law enforcement.

Safe Routes to Schools is a program through which school communities plan out improvements to help children safely get to and from school. Planning commissioner Christopher Ochs said he’d like to see a future safe Routes effort focused on central High School.

A fourth program is Paint the Pavement, where neighbors paint a design on a street surface to calm or slow traffic.

Edit note: The original article reported the public hearing was going to be Jan. 25, however it was subsequently changed by the Planning Commission to Feb. 8, 2019.