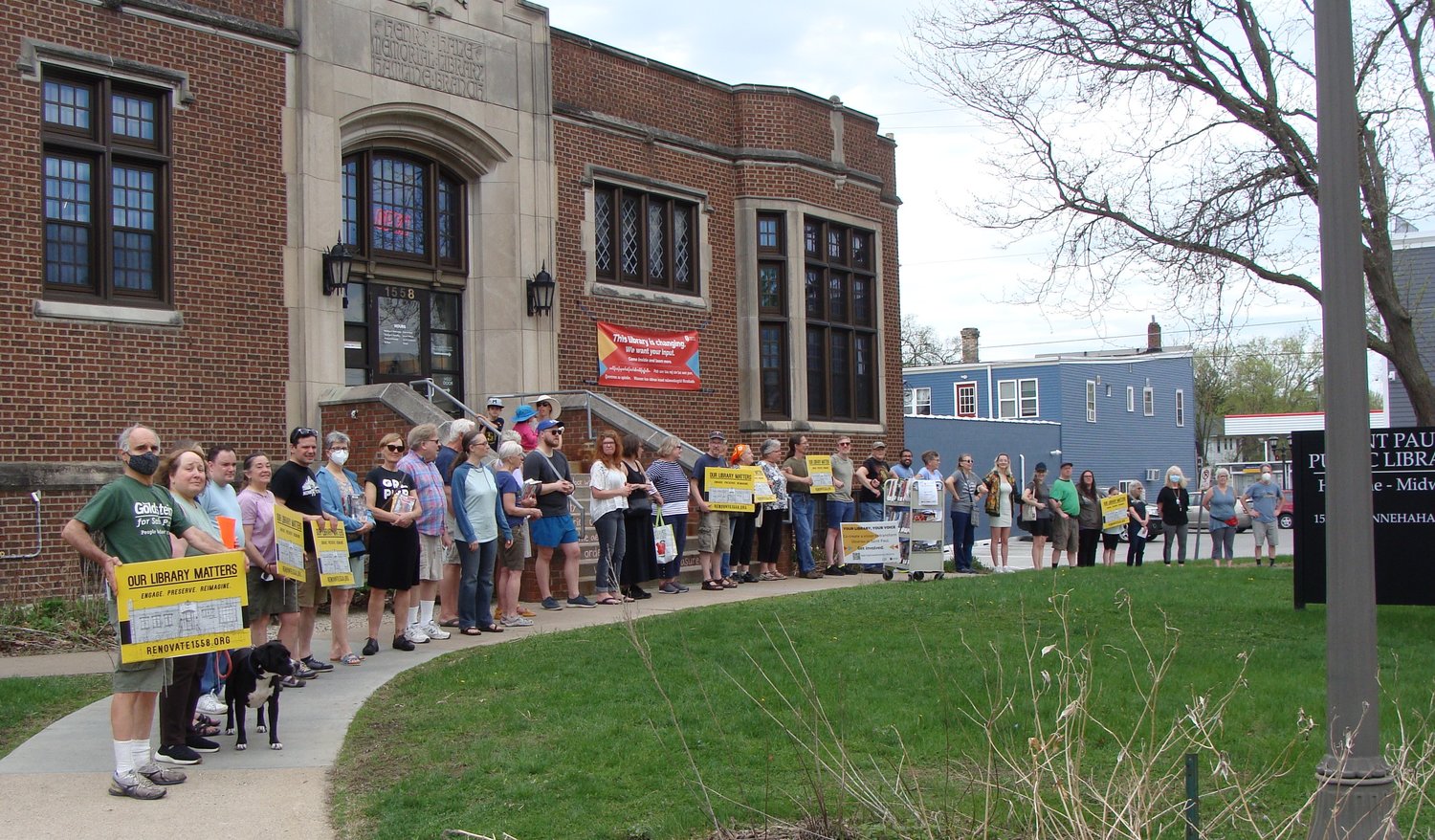 Read two columns with varying viewpoints on the Hamline Midway Library on our opinion page.

The Hamline Midway Branch Library’s nomination for the National Register of Historic Places moves on with no recommendation from the St. Paul Heritage Preservation Commission (HPC). After voting down proposals to support or deny the nomination, the commission voted unanimously Aug. 1 to make no recommendation to the State Historic Preservation Office (SHPO).
SHPO will consider the request Aug. 16. While designation wouldn’t be a guarantee that the building would be spared demolition, it could bolster arguments of those supporting saving the building. Or, it could serve to memorialize the building and require extensive documentation before it comes down.
HPC staff recommended approval of the nomination. But commissioners were split, with discussion often straying from the topic of designation itself to what a new building would look like. Such discussion is not germane to a National Register nomination.
The decision on the library is an unusual move for the HPC, which almost always supports National Register nominations.
The nomination came in as planning for the new library continues. In July, a couple dozen people gathered at the library to identify new features they’d like to see in a new building. Those results should be published soon.
Commissioner Stuart MacDonald said the library clearly meets the criteria for historic designation. But Commissioner Mark Lindley called the nomination “tenuous at best.”
Architectural historian and archivist Barbara Bezat researched the nomination on a pro bono basis. The library at 1558 Minnehaha Ave. is one of two Henry Hale Memorial Libraries built in St. Paul. The Collegiate Gothic style building was dedicated in October 1930 after years of neighborhood activism directed at getting a library built.
Bezat, a former HPC commissioner, cited the role of the neighborhood, especially women’s clubs and organizations, in getting the library built. The city acquired the site in 1919, but it took years to get anything done.
“Community input played a large part in persuading the St. Paul Public Library system to construct a building in the area,” the nomination stated. “Storekeepers had, by 1908, volunteered to set aside space in their retail locations for book ‘lending stations.’ By 1914, when the city designated the last of the Snelling Avenue library station locations as the ‘Hamline Branch Library,’ statistics began to show heavy use. By 1927, circulation numbers outpaced even the 10-year-old Carnegie libraries (at Riverview, Arlington Hills and St. Anthony Park), though the ‘Branch’ had just a tiny collection of books. In St. Paul the main library downtown and the three Carnegie branch libraries, all completed in 1917, were far enough away from Hamline that it was difficult for residents to reach them easily. One of the arguments in favor of the establishment of a library in the neighborhood was the distance between Hamline and the other libraries.”
Bezat also researched Hale, a St. Paul attorney who died in 1890. His will designated funds for a free medical dispensary and a free library. Libraries were by subscription at that time. The money was tied up is disputes for many years before it could be spent.
In an addendum to his will, Hale suggested establishing a library in the Hamline-Midway neighborhood. His preference had been to provide for the central library downtown and a public hospital.
Library staff sent an 18-page response asking that the nomination be denied, stating that there had been extensive public process before the decision was made to demolish the library. They also cited building condition as a reason for demolition and replacement of the building, and the need for improved accessibility for patrons with disabilities.
“Hamline Midway was the only library in St. Paul where the interior was closed to the public for more than one year during the COVID-19 pandemic due to its outdated HVAC system, which does not supply ventilation air to the occupied spaces,” the library letter stated. Library staff also cited the $400,000 on repairs and maintenance at the library.
They also took aim at Hale and his trust, stating that Hale had no living connection to the Hamline Midway community and his intention to invest in a central library did not come to fruition. “The fact that his will ultimately supported construction of the Hamline Midway Library was more happenstance than personal historic legacy.” Library staff went on to say that their research found that the terms of Hale’s will were convoluted.
Another point made was that historic features of the building will be included in a new structure.
The HPC heard from Friends of the St. Paul Public Library, which spoke against the historic designation, and two citizens who spoke for the nomination and building presentation. The HPC received about 40 written comments, with only two against designation or preservation.
Tom Goldstein, a leader of renovate 1558, objected to Library Director Catherine Penkert’s comments about library ownership of Hamline-Midway Branch Library’s Paul Public Library, saying that city facilities are owned by the public, not city departments. He asserted that community members want preservation, not demolition of the library.
After the vote, Goldstein said he’s not sure what Renovate 1558’s next steps will be.