• The Como Culinary Club participated in the St. Paul Public Schools Culinary Arts Competition on Feb. 23 at St. Paul College. The club has eight dedicated members who are passionate about cooking. They have taken classes at Como including Introduction to Culinary, Advanced Culinary, and International Cuisine. Courtney Gbolo teaches the Culinary Arts courses and coordinates the club. 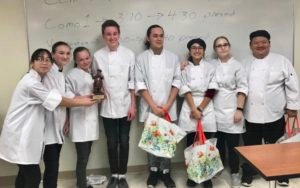 To promote the St. Paul event and display the skills they’ve learned, Como juniors Isaac Vu, Ong Vang, and Miguel Ortiz Loveland did a cooking demonstration on the Feb. 19 edition of the Fox 9 Morning News show. “Anytime students have the opportunity to showcase something they’re passionate about, the sky’s the limit,” Gbolo said.

As for the competition, which required students to prepare a three-course meal in an hour, Como’s students shined brightly. The team of Robbie Link, Ong Vang, Jillian Brenner, and Emma Luchsinger came in second place. They prepared a starter of pink gnocchi with pesto, ricotta and beet sauce, an entrée of glazed black cod with honey cream and crunchy grapes, and a chocolate, avocado and lime parfait. 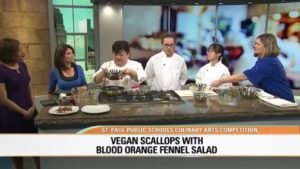 To complete the Como sweep of the competition, the team of Dina Thoresen, Isaac Vu, Audrey Westerberg, and Ong Vang took first place. They prepared a starter of vegan scallops and a citrus fennel salad, an entrée of ravioli with acorn squash, marjoram, sage and butter, and a dessert of strawberry and pistachio Fraisier.

The club kept cooking after school and prepared for the State ProStart Competition on Mar. 7 after the Monitor went to press. Look for results in the next Monitor!

• The Academy of Finance (AOF) and Math Department are partnering with local businesses to bring in mentors to help serve Como Park students. Every Wednesday, ten mentors visit Como to tutor 20 freshmen with their algebra skills during the advisory period. The mentors are from Math Motivators, coordinated with the Actuarial Foundation, and represent companies and institutions including Securian Financial, Travelers Insurance, the University of Minnesota and the University of St. Thomas.

AOF Coordinator Kris Somerville believes the external support from the foundation can help students achieve while strengthening partnerships in the community. “By getting help with math freshman year, students will be more confident academically in their high school years while also building relationships with outside professionals and mentors. Win! Win!” Somerville said.

Arden Ashley-Wurtmann is the Program Coordinator for Math Motivators. She understands the challenge of bringing in extra help for individual math tutoring. “As a former teacher, I often had volunteers who were excited to mentor students but didn’t have the math confidence to help them with their work. Recruiting tutors who are either professionals or students majoring in math-related fields has been critical to the success of the program,” Ashley-Wurtmann said.

• Lori Nakamura, who has been Como’s school nurse since 2008, coordinated a project with the Helen Keller Institute that provided every Como student an opportunity to receive a free eye exam at school and obtain free glasses.

Many Como students don’t have access to regular eye exams or resources to secure corrective eyewear. In total 869 students were screened and 194 students are getting glasses. An additional 32 were referred for further treatment.

“Students were thrilled to see clearly! Being able to choose their frames brought a whole new level of excitement!” said English Language Learner (ELL) teacher Jane Sevald. ELL teacher Jill Wielgos added, “even for students who had glasses, many had frames that were outdated or damaged. Students were extremely thankful for an updated pair.”

History scholars who qualified for the St. Paul regional competition on Mar. 9 include the following students from their respective categories:

—Individual Documentary Film: Lisa Saechao for the Hmong Genocide; Wyatt Hanson for Sound in Film; and Yeeleng Vang for 9/11.

—Research Paper: Issac Vu for the Tragedy of Pearl Harbor; and Aleeyar Keh for the State of Minnesota v. Dennis Linehan.

• For the fifth consecutive season, the Como Girls Basketball team won the St. Paul City Conference Championship. Dating back to 2015, the Cougars are on a 52-game winning streak within the conference. Como capped off its regular season with another Twin Cities Title by defeating Minneapolis South, the champion of the Minneapolis City Conference, with a dramatic 56-55 victory.

The annual Twin Cities Championship Game is always an intense game with city pride on the line. The Cougars have won all five of their Twin Cities games to keep bragging rights in St. Paul. The Cougars were practicing for the Section 4AAA semi-finals in early March as the Monitor goes to press. Their overall record was 23-2.

• Como sophomore Stone Frasl qualified for the State Wrestling Meet by placing second in the 138-pound division of the Section 4AA Meet. Sophomore Kaleb Sears and senior Alonte Johnson finished third in their weight classes, narrowly missing a chance to wrestle at state. They joined other teammates at the Xcel Energy Center on Mar. 1 to support Frasl, who lost his match but had an unforgettable experience representing Como on the big stage.