Mosaic on a Stick tessellates a good story

Story and Photo by MARGIE O’LOUGHLIN

Lori Greene describes herself as a community-based mosaic artist. She owns and operates a mosaic arts business called Mosaic on a Stick, located for the past four years at 1564 Lafond Ave., in the historic Hamline Park Playground Shelter. It’s a place where both art and community flourish. 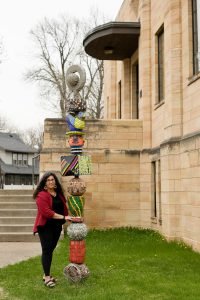 Photo right: Artist Lori Greene in front of her business on the SE corner of Lafond and Snelling avenues. Their close proximity to the Fairgrounds inspired the name that first came up jokingly, but stuck: Mosaic on a Stick. 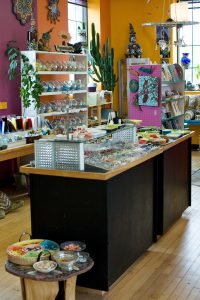 Photo left: The art supply and gift side of Mosaic on a Stick.

To hear Greene describe the arc of her own career, one of the constants has been her willingness to follow her intuition. She had been close to signing a lease on another property in 2013, when the City of St. Paul called and asked if she would be interested in renting the playground shelter at Hamline Park. A long-time admirer of its architect, the city’s first African American municipal architect Clarence Wigington, she jumped at the chance. It just seemed like the right thing to do.

“This rental situation has worked out well for us,” Greene said. “We’re able to be in a beautiful, historic building with plenty of room for working with glass, teaching classes, and selling glass-related materials and artwork. We’re able to function as what we are, which is a community art space.” 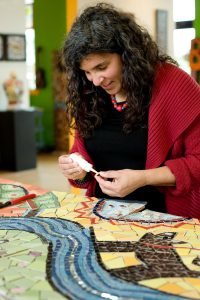 To her joy, people still come in to use the public restrooms and drinking fountains in the old park building. Some of them might even make a small mosaic while they’re there. Greene said, “I’ve had more than two dozen conversations with people in their 70”s and 80’s who remember having gone to park dances here in their teens. They just want to look around, reminisce, and tell their stories.”

Mosaic on a Stick frequently offers community art events in which people of all skill levels can participate. There’s an art show coming up this month called, “Mother is a Verb,” with pieces for sale by community artists across all media. The opening celebration is Thur., May 11 from 6:30-9:30pm, and the show will run through Fri., June 30.

The title of the show seems fitting, as Greene had three small children herself when she launched Mosaic on a Stick in 2004. 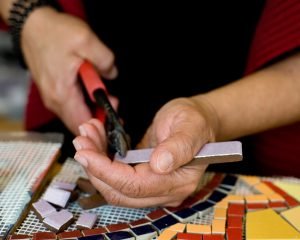 Photo left: Greene said, “One of our most popular classes is where students learn to make a mandala, which is a circle of glass cut from repeating patterns. Making a mandala is a peaceful act. I feel happy when I’m making one, and I think other people do too – whether or not they know why.”

Greene’s early art training was in textiles, a medium about as different from glass as it could be. She graduated with a BFA from the California College of Arts in weaving, having been drawn to that craft because of her ancestral Choctaw Indian roots. She eventually found her way to glass in grad school at the Maryland Institute College of Arts. “I started making mosaic there before I even knew what it was called,” Greene said.

Greene plans to make a four-sided sculpture of a woman for the outside of her building, and have it installed by this fall. The sculpture will stand about 10’ tall. Her goal is to work with women of color in the neighborhood to develop the idea and to do the mosaic tiling. She said, “I want it to be their story—our story.” 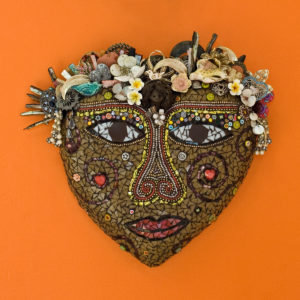 Photo right: Greene plans to make a four-sided sculpture of a woman for the outside of her building, and have it installed by this fall. The sculpture will stand about 10’ tall. Her goal is to work with women of color in the neighborhood to develop the idea and to do the mosaic tiling. She said, “I want it to be their story—our story.”

Greene’s work can be seen all around the Twin Cities at North High, Minnehaha Academy, HCMC, the Seward Co-op, the Global Market, and the Ronald McDonald House, to name just a few. Her work is unmistakably colorful, pattern-based, and often tells a story. In other words, it’s hard to miss.

Thirteen years ago, Greene was selected to participate in a program at Intermedia Arts in South Minneapolis that paired artists with community activists. During her initial interview, she was asked what her reason was for applying. Again, following her intuition, Greene said, “I know that people need art to heal, and spaces in which to make their healing art. I wanted to make a safe space one day for women, especially, to come and do their creative work.”

It seems that is just what Greene has done. Mosaic on a Stick is a place where life meets art, and where neighbors meet each other.

In keeping with the community-mindedness that drives her work, Greene is now also hosting a “huddle” that came out of the Women’s March last January. “We meet on the third Thursday of every month at 6pm,” she said, “and anyone is welcome—it’s an open group.”

For more information about Mosaic on a Stick and its many offerings, contact Lori at 651-645-6600 or lori@greenemosaic.com.