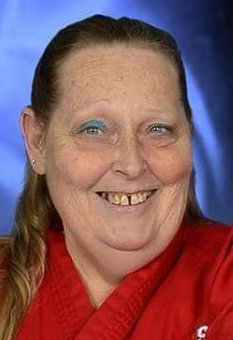 After a valiant three-year battle with kidney cancer, Linda Marie (Blumer) Johnson, 68, died on Sunday, Aug. 23, 2020 surrounded by her loved ones, just the way she liked it best.

She was born to Donna Jean (Pickering) and John Blumer in Minneapolis on Aug. 28, 1951, the oldest of six children. When her mother died, 13-year-old Linda took over raising her siblings. She attended St. Francis schools. Linda met the love of her life, Sunny, at her father’s auto wrecking business as a teenager, but their lives took them in different directions for many years. They finally tied the knot on Aug. 16, 1988. Linda worked at Target for nearly 30 years. In her mid-50s, she took up karate and earned a black belt at USA Karate. She volunteered via Be The Match, SAVE, and Stomp Out Suicide. Linda collected wolves, an animal she valued for its strength and majesty and considered her spirit animal. During her own cancer treatments, she continued to worry about her loved ones and asked how they were from her hospital bed. She left behind a closet full of Christmas gifts. Over the years, Linda took many people under her wing, offering them support and shelter when needed. Many recall how she helped raise them, teach them, and shape them into the people they are today.

A feisty woman with a big heart, Linda loved it best when her house was full and she was feeding people. Known for her blue eye shadow and swift round kick, Linda was a woman who was fiercely independent, loyal, stubborn and strong.

Visitation will be held from 5 – 8 p.m. on Thursday, Aug. 27 at Strike Life Tributes. A private funeral service will be held on her 69th birthday on Friday, Aug. 28 at 11 a.m. The service will be livestreamed on the service day and it will be available to view for 89 days at www.strikelifetributes.com. Burial at Stanford Cemetery. Memorials are preferred to Be the Match, SAVE and Stomp Out Suicide.