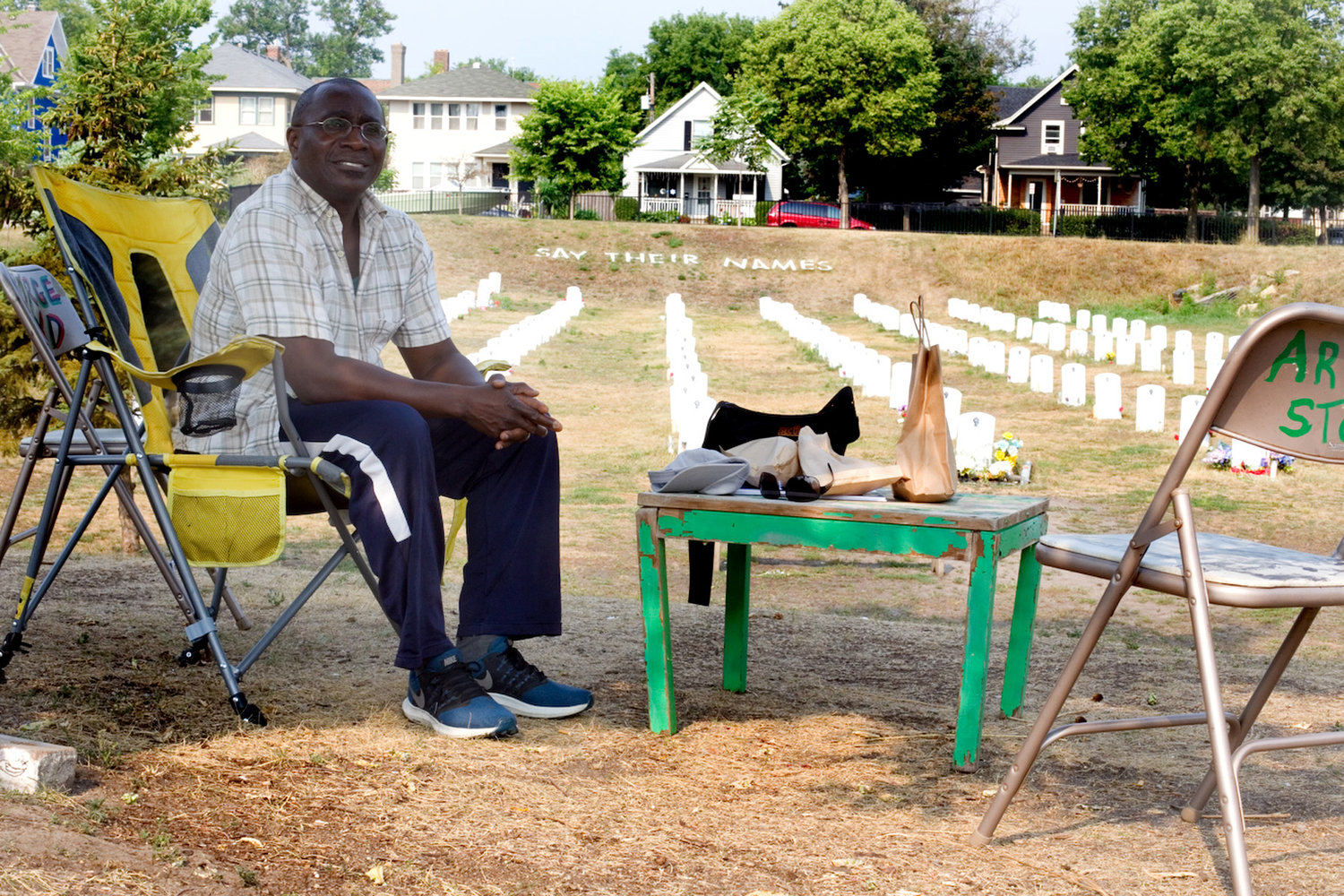 “For me, this is the most peaceful place on earth," explained Dr. Remi Douah, who is a listening presence at the "Say Their Names Cemetery" near George Floyd Square. "I can easily spend eight hours a day here. It’s not a chore; it’s not an intervention. It’s my way of life now. It’s what I structure my days around.” (Photo by Margie O’Loughlin) 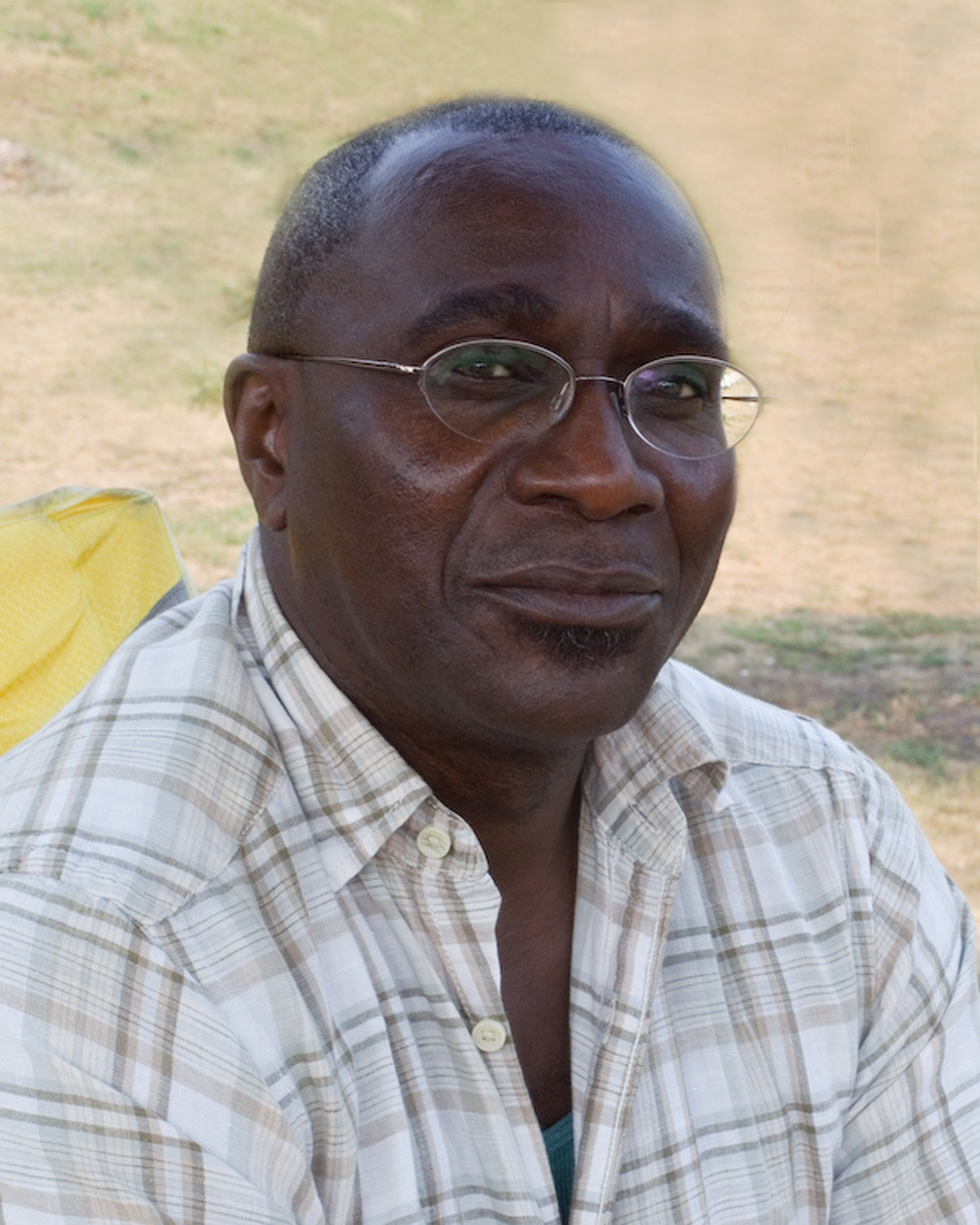 Dr. Remi Douah said, "The most frustrating thing about living in America is the false belief that we are all equal. We are living within the construct of a lie." 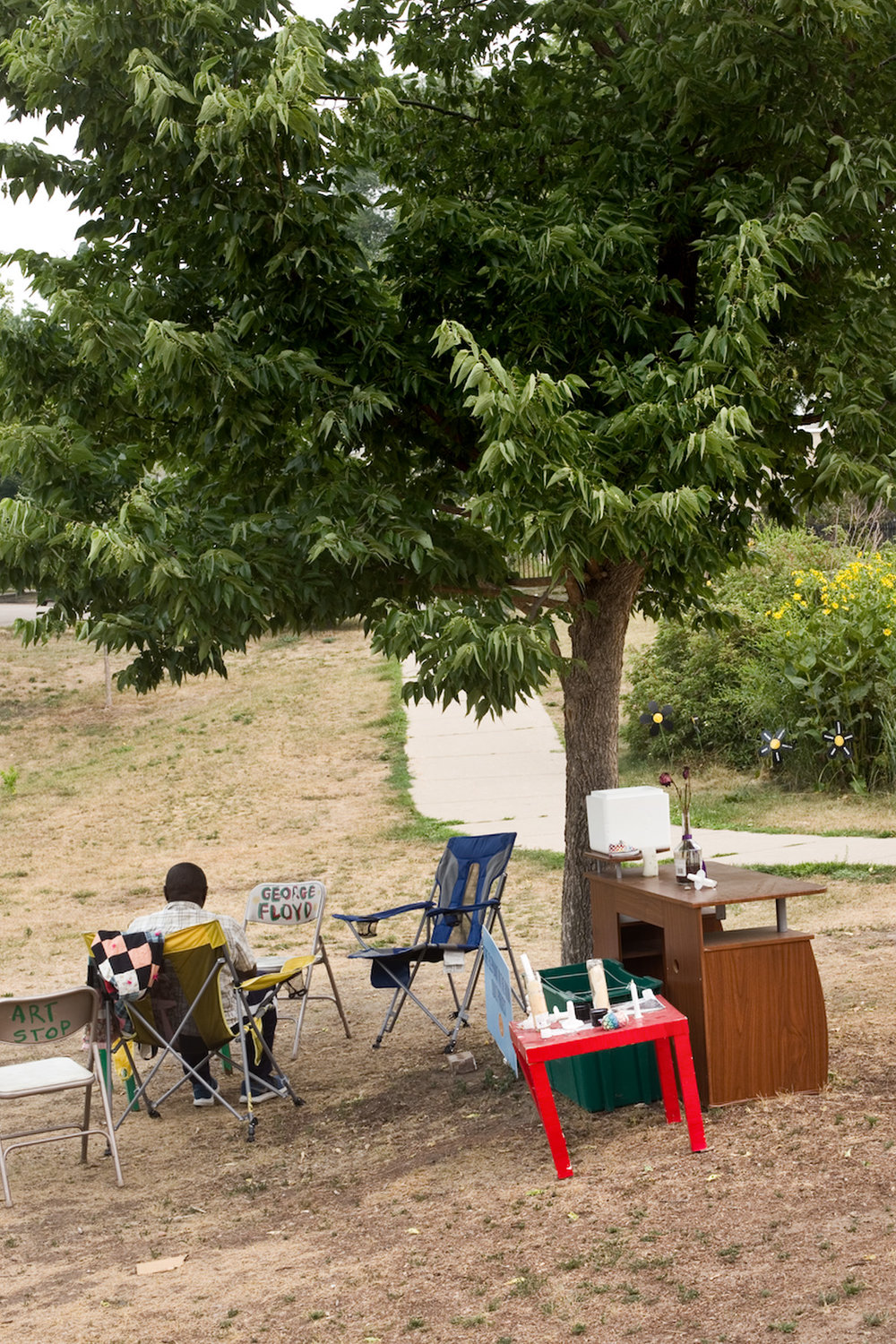 Dr. Remi Douah said, "The most frustrating thing about living in America is the false belief that we are all equal. We are living within the construct of a lie."
Previous Next
Posted Thursday, September 16, 2021 10:34 pm
846.org

“I can see a healing center here with services, all kinds of services for Black youth. Mental health services, daycare, GED, health and healing, office space for a social worker, a parole officer, homework assistance, and the whole place has a feeling of safety. It’s not a clinic setting – it’s home.”

as described by Isak Douah

Dr. Remi Douah is a listening presence at the “Say Their Names” Cemetery near George Floyd Square, just off East 37th Street between Chicago and Columbus avenues.
He spends hours there every day, seated under a tree. He arrives early in the mornings when it’s hot. He brings two folding chairs: one for himself, and one for someone who may need to talk. Each of the 100 headstones at the “Say Their Names” Cemetery bears the name of a Black American killed by law enforcement. It is a sobering backdrop.
People walking past Remi assume he is there to provide security for the cemetery. They often stop and ask, “What are you doing here?” Remi holds two advanced degrees, but says the answer is very simple.
He is there to listen.
He explained, “I’m a father. Parenting has always been a hard job, but after witnessing the brutal exit of George Floyd from this world – it became much harder for those of us with Black kids.
“I’m from the Ivory Coast in West Africa; my wife is Icelandic. We have a son, who is 23 years old. There are many complexities involved in raising a multi-cultural child. We strive to raise our son to be a balanced human being, but it hasn’t been easy.
“When George Floyd was murdered, our son Isak had a nervous breakdown. He lost all interest in school, friends, and everything else he cared about in his life.
“He asked me these three questions:
1. Why are they killing us?
2. What did we do wrong?
3. What can we do to prevent the killing?
“I am often thinking about those questions, especially the third one. As it turned out, our son was lucky. When my wife and I suggested he see a therapist, he agreed – and the therapist helped him.
“Isak chose to work with a Liberian American therapist named Tanya Young, who is the founder of Peace Be Still Clinic in Brooklyn Center. It’s a mental health clinic that specializes in culturally competent mental health services to immigrant populations, primarily Africans of the Diaspora. The aim is to connect underserved populations to quality mental health care and existing community resources, to provide mental health awareness, and to dispel culturally-held biases that are a barrier to seeking mental health care.

One young man’s story
After George Floyd was murdered, Isak spent a lot of time volunteering as a security guard at George Floyd Square. Remi started coming down too, first to the square and eventually finding his place at the cemetery just a block away. He said, “I was trying to understand what had happened to my son.
“I found that I enjoyed sitting under a tree.
“When I was growing up in Africa, I have a memory of the giant Baobob trees. Villagers would gather underneath their canopies to talk with the elders. That’s how I see what I’m doing here. So many people have gotten to know me in the last 14 months, mostly by word of mouth. If they have a friend or a family member who is hurting, they say, ‘Go and talk to Dr. Remi, or go and talk to Isak’s dad.’” Douah is quick to point out that he is public health professional, not a psychologist or psychiatrist.

Loneliness, isolation rampant
He continued, “The struggles of young Black people are rooted in inequality, trauma, and pain. In some ways I feel it’s worse now that former officer Derek Chauvin is in jail. The curtain has come down. People are wondering what is next and what, if anything, has changed?
“I see my parenting role as being a partner to my son, an equal. The things I hear him talking about with his friends, they are trying to find a way to break the cycle of violence that is killing this country. How can we co-create a better future along with them?
“My doctoral degree and training are in something called Human Centered Design. Learning to co-create is at the heart of that. I was trained to accept challenge, and to not take the outcome personally.
“I have learned to be as flexible as bamboo.”

A vision for the future
Isak Douah and his friends have envisioned a non-profit organization they call 846s.org. The name stands for the eight minutes and 46 seconds it took for Derek Chauvin to squeeze the life out of George Floyd. Remi said, “I am listening to their ideas and, as a public health professional, I am providing some direction. But the ideas are theirs.
“As Isak worked through his mental health issues, he said, ‘It’s good to go to a therapist, but we also have to do something for our community.’ My son asked me to go out with him one night in the car. We drove to a vacant lot near George Floyd Square. He stopped the car and said, “I can see a healing center here with services, all kinds of services for Black youth. Mental health services, daycare, GED, health and healing, office space for a social worker, a parole officer, homework assistance, and the whole place has a feeling of safety. It’s not a clinic setting – it’s home.
“I said, “Let’s get your ideas down on paper.’ Isak asked an architecture student friend to come over, and he drew the whole thing out for us. Isak and many of his friends graduated from South High School, a school that was designed by a prison architect. That building has no windows, no natural light. The healing center would be full of windows. Isak said, ‘We want to be able to see right through it. We don’t want the prison mentality anymore. We want to heal.’
“I was in awe listening to him describe what he and his friends had been talking about, and seeing it come to life in front of my eyes.”

Black mental health matters
According to Douah, “The relationship between the Black community and the medical establishment historically has not been good. A generalized suspicion of mental health professionals has been rolled into this too, and young Black and Brown people have a lot of stress about the police.”
Douah said, “I can tell you from my own experience as a nearly 60-year-old man that when I am in Europe or in Africa, I never think about the police. I never worry about having interactions with them. But here, in America, we have to be perfect. We have to have all of our mental cylinders firing at 100% all of the time.
“Do you have any idea how unrealistic that is?”

The grace of listening
In the African tradition, the best interlocutor is the one who creates an environment for another person to talk without being asked too many questions. That is the environment Douah has been able to create under the cemetery tree.
He said, “I am a happy man. I am happy to see each person who comes here. I can be fully present while I listen. Sometimes no one is sitting in the second chair, and then I am happy to process my own thoughts. I think about something that is puzzling me until I can find a solution. This place is my sanctuary.”
To learn more about the ongoing work of developing the healing center or to advance their work with a community donation, go to www.846s.org.