Envision SPPS will be implemented in fall 2022 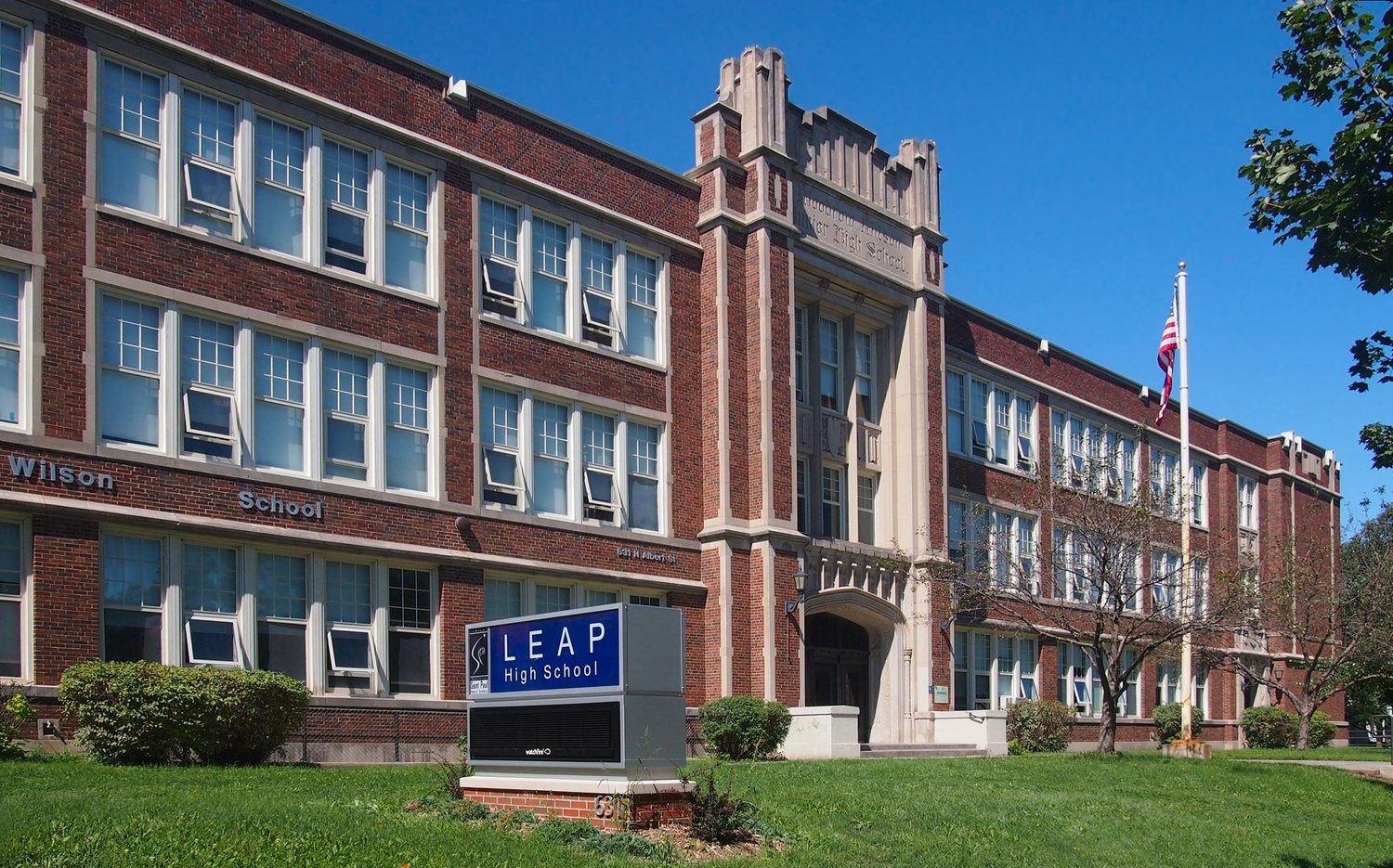 In the fall of 2021, neighboring Minneapolis Public Schools implemented its Comprehensive District Design, a sweeping program that displaced 14% of the district’s 35,000 students. The plan redrew attendance boundary lines, moved magnet schools into the center of the district, and shifted bus routes. Supporters said it would address long-standing achievement gaps based on race and income. The change was moved through during COVID-19 when residents were unable to attend board meetings in person. The plan cost about $11.5 million its first year.

Public school enrollments have been declining across the state with an estimated 2% decline due to COVID-19 for the 2020-21 school year. When the CDD plan was developed, 63 percent of Minneapolis students were choosing to attend schools outside the Minneapolis Public School system.

Area schools that could be affected by Envision SPPS have community roots that run deep, some dating back for more than a century. Here’s a look at area schools that hang in the balance:

1880 - Jackson School opened at MacKubin and Ellen streets in Frogtown. (Ellen is now Sherburne Avenue.) Jackson was named for Andrew Jackson, the seventh president of the United States.

1885 - The school at “Hamline suburb” was named Simpson School by the city’s Board of Education. The community had yet to be annexed into the city.

1924 - A districtwide construction project brought a new Jackson school. The school would grow over the years with a new library addition as recently as 2000.

1964 - Wilson again becomes a junior high school, and would continue until 1980.

1972 - A $25 million bond issue to replace and renovate schools was passed. Change was also pushed by the need for racial desegregation.

Aging schools in Hamline-Midway and Frogtown presented challenges, including Hancock and Galtier. Galtier’s building was deemed a fire hazard. Drew School was condemned and many students were sent to Jackson. McKinley School on Carroll Avenue had already burned down.

Hancock and Galtier were replaced and new schools opened a couple of years later.

1981 - Wilson houses the Benjamin E. Mays Fundamentals School, for students in grades K-8. Mays stays in the Wilson building until 1991, when it moves to Rondo Education Center.

1990 - As part of a districtwide capital improvement effort, $1 million was spent to purchase land adjacent to Jackson Elementary to expand field and play space.

1992 - Wilson becomes home for the Expo for Excellence Middle School, which stays there until 2003.

1993 - The Hancock/Hamline University Collaborative Magnet School opens, to enhance learning at both the elementary school and university. A $236,000 federal desegregation grant is part of the funding mix used to start the program. The school name was later changed to Hamline Elementary.

2003 - LEAP (Limited English Achievement Program) Academy moved from its located on Sibley Street to Wilson, sharing space with Wilson and then Expo for a time. LEAP took over the entire building in 2004 after the Expo middle school closed.

2010 - Jackson Elementary was included in the city’s Promise Neighborhood, a city-county-Wilder Foundation initiative to promote a “cradle to career” learning experience to shepherd students from poverty to prosperity and reduce racial and cultural achievement gaps. But subsequent funding efforts fell short, after the first federal grant.

2012 - Galtier was converted from a K-5 science magnet school to a neighborhood school, as part of the “strong schools, strong communities” campaign. The campaign targeted racially isolated, underperforming schools. Resources from Target Corporation were used to renovate the school and its academic offerings.

2015 - Galtier and Hamline were eyed for change, as Jie Ming Chinese Immersion outgrew space at Hamline.

2016 - A $14.5 million plan to renovate and expand St. Anthony Park Elementary neighbors put more pressure on Galtier as some Hamline-Midway families chose the outside-of-neighborhood option. Closure of Galtier at the end of the 2016-2017 school year was announced, but in a surprise move the school board voted 4-3 to keep Galtier open and not force a merger with Hamline.

The St. Paul School Board is preparing to vote Nov. 16, 2021, on a plan that would close schools including Galtier and Jackson elementaries and the LEAP Academy High School, and make program changes at others. Supporters of LEAP fear their voices aren’t being heard.
As of Monitor deadline the school board was hosting listening sessions and meetings to review the proposal. Whether the actions will be amended remains to be seen, as the administration has emphasized the need to have the entire package go forward.
The closings and changes are proposed as part of the larger Envision SPPS plan, which if approved by the school board would be implemented starting in fall 2022. Eleven work groups of more than 100 people, including school staff, parents, community partners and other organizations, studied options for the past year. But the work groups have come under fire for not being inclusive.
Here’s the changes for other area schools:
• Galtier and Hamline would merge, with the Galtier building possibly used for a preschool program.
• Jackson would close. Students in the Hmong Dual Language program would transfer to Phalen Lake Elementary. Students in the community program would attend Maxfield.

3,000 students displaced
Envision SPPS would displace about 3,000 students or 9%. It’s not known how many teachers and administrators would lose their jobs.

Teens, young adults affected by LEAP changes
While the elementary schools eyed for change have had parents and families turning out in force, LEAP brings adult and teen voices to the table. The school serves students ages 15-20 who are new to the United States and who are learning English while earning a high school diploma. It is considered an alternative high school, and provides an educational opportunity for students whose needs often do not match the offerings provided in traditional high schools.
While district officials contend the students can be served at other schools, LEAP supporters are skeptical. They are asking the school board to consider alternatives, such as relocating the program. They also object to what they see as a very tight timeline for change.
District officials have said they’d work with students and families to find new programs for LEAP students. The transition would start in fall 2022.
Matt Olson, who teaches music at LEAP, described students who felt lost at other high schools before attending LEAP. He recently asked school board members to imagine the loneliness and isolation students feel at other schools.
“He literally wandered through high school,” Olson said of one student’s experience before transferring to LEAP.
Faculty members said the students wouldn’t have the same level of support at other schools. The LEAP staff is trauma-informed, to be able to deal with the unique issues each student has as a refugee.
Graduates have also spoken out, with one telling the School Board that “LEAP was the place that made me feel at home again.”
Anne Lowe has taught for 16 years at LEAP. She said the school creates an atmosphere of belonging and support that its students use to succeed as adults, to become contributing community members and leaders.

‘This is going to be hard’
Declining birth rates and increased competition from charter schools, and school choice are cited as reasons to move from smaller schools to larger schools with more resources. Only about 63 percent of all St. Paul school-age children attend public schools. Others are home-schooled, open-enroll elsewhere or attend private or charter schools.
St. Paul Superintendent Joe Gothard has emphasized at board meetings that the change is not so much about cost savings as it is about keeping schools viable. Nor is it about the pandemic and education changes tied to that. “While it will create some efficiencies, at its core it’s about making all of our schools sustainable. I know no matter what we say or how it sounds the reasons are, this is going to be hard.”
But LEAP supporters say change will also be very hard for newcomer students. Teacher Sandy Lucas asked what message closing LEAP sends to the greater community. “What does this say about how we treat our most vulnerable?”