Murray and Olive Goff have their own Sunday morning radio show ‑ and now they’ve been on a billboard, too 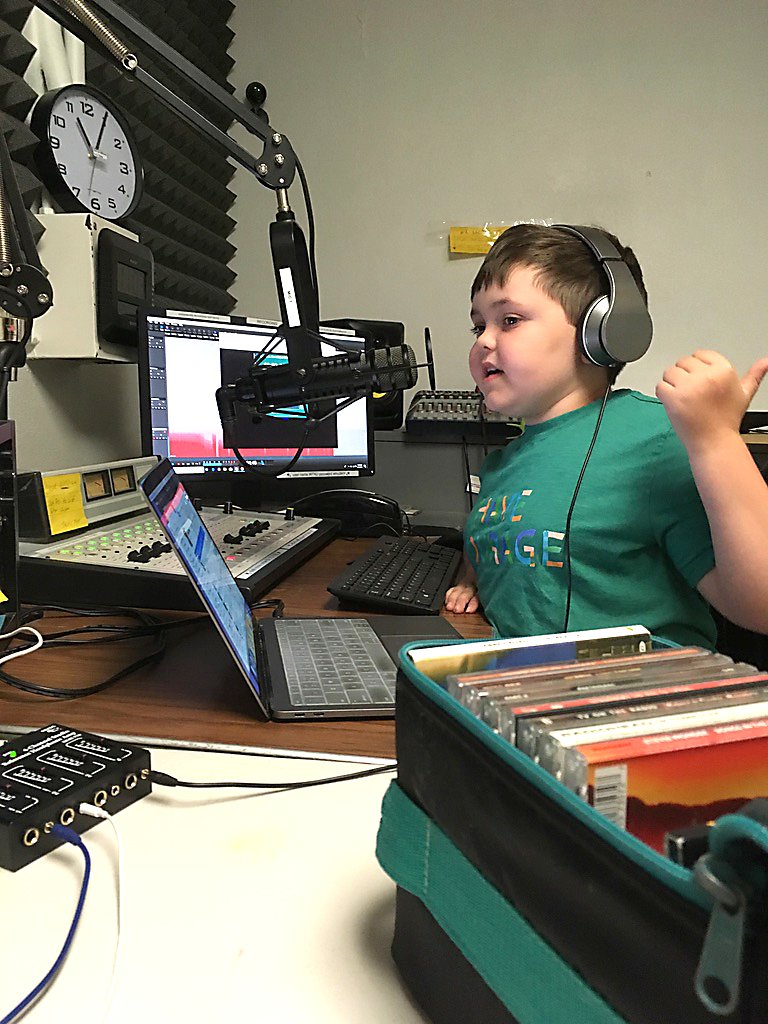 Murray Goff, who has cystic fibrosis, hosts a radio show with his sister, Olive, each Sunday morning on Frogtown WFNU 94.1. After interviewing real estate agent Kris Lindahl, they got a billboard to showcase their weekly episodes. (Photo submitted) 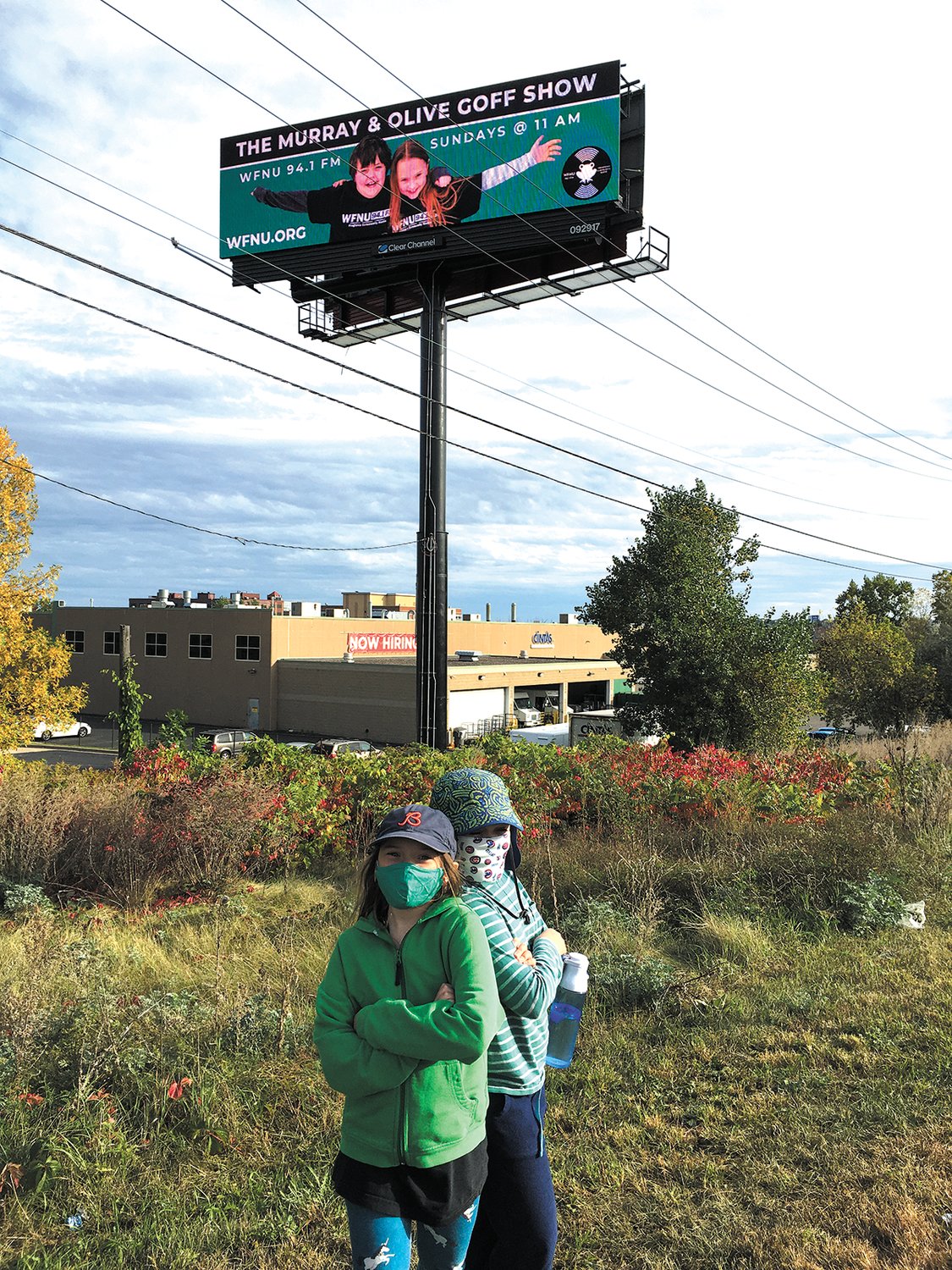 Olive and Murray Goff took inspiration from Kris Lindahl’s pose for their own billboard. (Photo submitted) 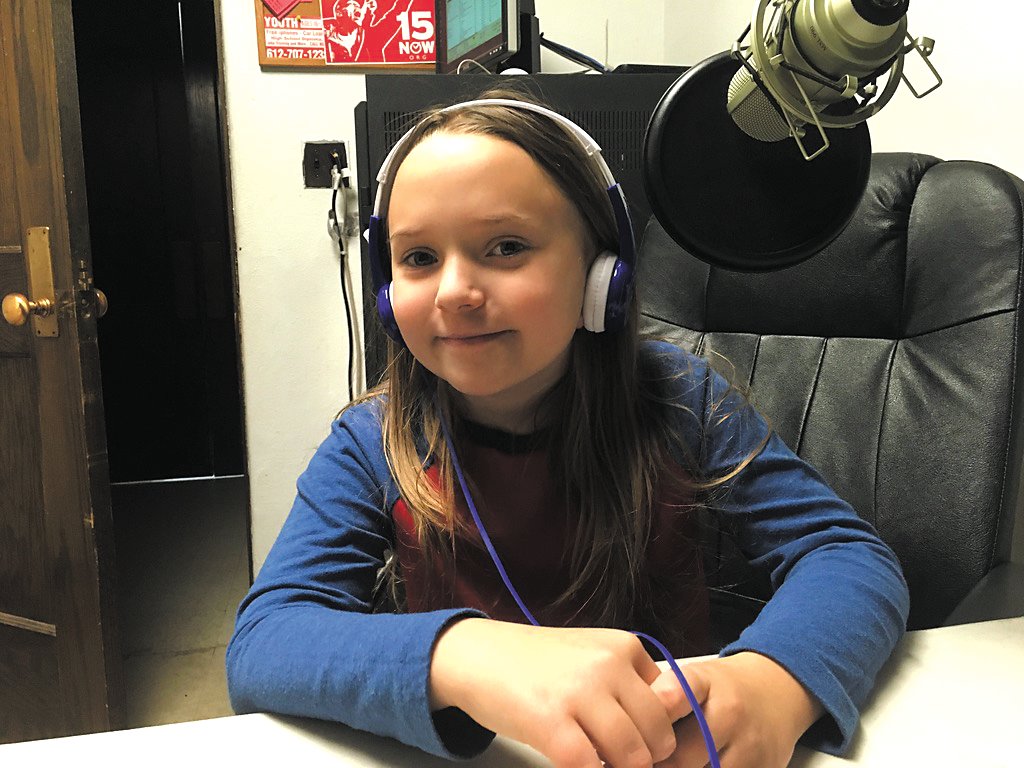 Recording the podcast looks different since March, when Olive (top) and family sat in a studio on Sunday mornings.
(Photo submitted) 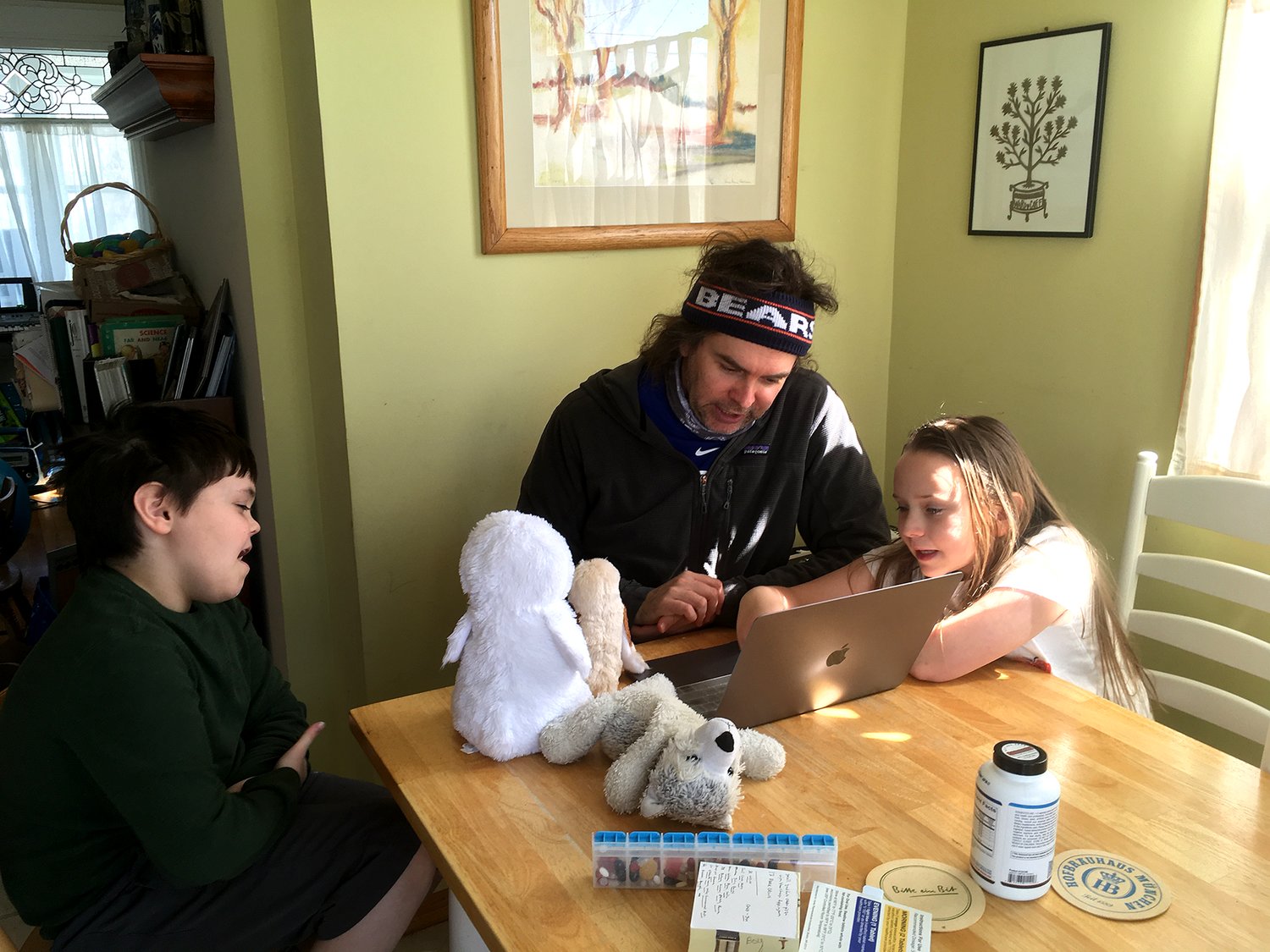 “Our radio show is unique. It’s kind of just us talking about things we like to talk about.””
~ Olive Goff, age 9
COMMUNITY-OWNED RADIO

WFNU is the product of almost four years of organizing around the idea that community-owned media can be a powerful tool to unite and empower the Frogtown community, the most racially diverse neighborhood in St. Paul.

2011 ‑ President Obama signed the Local Community Radio Act, which opened up many LPFM (Low Power FM) frequencies for community stations across the country. Low Power FM stations have a broadcast range of about 10 miles, meaning they have a hyper-local range and focus. The FCC was not expected to open up these kind of frequencies again, so organizers from Frogtown and Phillips neighborhood in Minneapolis formed the Twin Cities Community Radio Initiative and began working to submit applications to the FCC.

2014 – After a long organizing campaign, Frogtown Neighborhood Association was granted a permit from the FCC to build a community LPFM radio station and broadcast on 94.1 FM.

2016 – WFNU had finally raised its antenna and officially became an FM broadcaster through the generous and continuous support of the community. For the first seven months of streaming, WFNU operated off of a fold-out table inside Center for Hmong Arts and Talent’s (CHAT) studio. It grew to have its own live broadcast studio space inside CHAT.

2017 – WFNU moved into a new space at Faith Lutheran Church, added over 60 new volunteer DJs and now has an almost full schedule of live shows.

2019 – WFNU moved from a program under the Frogtown Neighborhood Association (FNA) to its own non-profit 501c3 organization, Frogtown Tuned-In.

When Murray and Olive Goff noticed the billboards for real estate agent Kris Lindahl popping up around the Twin Cities, they wanted to know how he got them.
So they invited him onto their Frogtown WFNU 94.1 radio show to ask.
Now they’re up on their own billboard, thanks to Lindahl.
At the end of the radio show, Lindahl said, “I have a present for you,” the children recalled.
“And so we got our own billboard,” stated Murray, age 12.
The billboard was up along 35E heading south into downtown St. Paul Sept. 28 to Oct. 4, and will be up again for two weeks in late October and early November.
The kids met with Lindahl under the billboard to snap a photo. “It was kinda of breathtaking,” said Murray. “We were huge.”
He doesn’t think the billboard reflected the true color of his hair, which is brown and looked reddish on the sign. And they both agree his hair looked a little shaggy. They took a cue from Lindahl’s brand and have their stretched wide on the billboard.
“It was pretty cool,” said Olive, age nine.
Their mom, Jess, went out one morning as she typically does and was surprised to see the billboard. “I shouted out in the car,” she recalled. “It was so weird. It looked like them, but really big.”

‘I was blown away’
Murray and Olive had a lot of questions for Blaine resident Kris Lindahl when they interviewed him on Dec. 15, 2019. What’s his favorite color? (Royal blue) What is he trying to accomplish with his arms wide open in the ads? (“We do things different and we want to stand out.”) What’s a guaranteed offer?
“It was a nice conversation,” said Lindahl. “They’re really sharp, sharp kids.”
He’s no stranger to the radio himself as he’s done interviews and radio ads over the years, and was impressed by their show.
He appreciated the educational aspect of the Murray and Olive Goff show, and enjoyed its format.
“I’m a fan,” said Lindahl. “I was really blown away by how organized and how put together it was. I was honored to be a part of it.”
A core value of Lindahl’s company is to be generous and to give back. He donated a billboard to Murray and Olive, and then let them pick a local non-profit organization to donate a second billboard to. Murray and Olive choose Frogtown Farm. “I saw it as an opportunity to show them a little bit more about generosity,” observed Lindahl.

Kids talking about what they care about
“Our radio show is unique,” said Olive. “It’s just kind of us talking about things we like to talk about.”
When she grows up, Olive wants to do something with animals, live on a farm and have horses. Murray, on the other hand, aims at doing something related to space, architecture or biology.
Olive is currently a student at Cornerstone Montessori Elementary School and Murray is at St. Paul Academy Middle School.
The family had joked about the kids having a radio show of their own, and when they saw an advertisement that WFNU was looking for radio hosts, they decided to apply. About a week later, they went in and talked to the studio board in their one-room studio.
The board choose three of the four applicants. “We made the cut,” recalled Olive.
‘The thing we most appreciate about Murray and Olive is that ‘we can do this’ attitude. No task or interview is overwhelming to them,” said WFNU Co-manager Philip Gracia.
“They bring to the community something that’s lacking from mainstream media: carefree and spontaneous actions and response. That I find so refreshing! WFNU is so proud of the work and commitment that Murray, Olive and papa (Kevin) provide to us.”

Thankful for the show
They pitched the idea of the Murray and Olive Goff show in the fall of 2017, and it officially began in January 2018 when Murray was 9 and Olive was 6.
“I’m surprised it’s still going today,” observed Olive.
At a certain point, she said, you start to get used to being on the radio. “Maybe we talk over each other sometimes. We used to have debates on the air,” said Olive. “It was a little rowdy.”
Mostly, they’ve stopped talking over each other now.
Until COVID-19, they recorded each 58-minute session live on Sunday mornings at the studio. Now, they’re at their kitchen table in the Midway, and have to be super quiet when the songs are playing because there isn’t a mute function with GarageBand, the software they’re using.
They had been learning the ins and outs of using the sound board at the WFNU studio, and knew how to mute their microphones during the songs.
While the shows changes every week, the segments that make it up don’t change. There’s always animal news, the week with Olive, the book I read, and deep thoughts with Olive. They’ve added a segment to talk about COVID-19 news updates. Their stuffed animal friends – Todd the sloth, and Wolfie – visit.
In between each segment is a song that they and their dad, Kevin, picks out that connects with what they are talking about or is one they’re singing and hearing on the radio. Each episode begins with Taste of Honey by Herb Alpert and the Tijuana Brass and ends with “Moonshiner’s Dance Part 1” by Frank Cloutier and the Victoria Cafe Orchestra. They also play “The Book I Read” by the Talking Heads, “I’m Crying” by The Animals, “Where’s Your Head At” by Basement Jazz, and “Eight Days a Week” by the Beatles.
“As a parent, I think the show helps them learn how to talk about what matter to them. Also it gives me a chance to introduce Murray and Olive to different music, which sometimes I admit they don’t like,” remarked Kevin. It also helps them connect with their grandparents. “It’s like a weekly letter to them know what’s going on in their lives and what matters to them in their own voices,” he added.
Their mom, Jess, is involved, too. Pre-COVID-19, her segment was called, “Call Your Mother.”
“But we don’t actually call her because she’s right in the house,” explained Murray.
They have lots of ideas for future radio shows. They think it would be great to interview Minnesota author Kate DiCamillo, as they’ve read many of her books.
As the Goff children have grown, so has the hyper-local radio station that plays only Twin Cities music and reaches a radius of about 10 miles around Frogtown. Today, they are on the wall of fame inside the two-room studio WFNU occupies at Faith Lutheran Church.
Archived shows since March are available to hear on Mixcloud, and the new shows are on WFNU each Sunday at 11 a.m. Listen online at www.wfnu.org and at 94.1.
“We’re very thankful for WFNU to let us have a show like this,” said Murray.
Watch the full interview with Murray and Olive on the Monitor web site, www.MonitorSaintPaul.com.