Lowery and Mary Ann Smith have found that depression, stroke recovery made easier by staying active 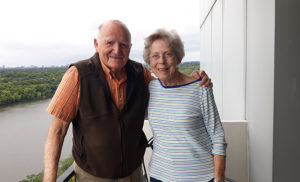 Lowery and Mary Ann Smith on their balcony, with the river behind them. (Photo by Jan Willms)

For Lowery, who is 90, being physically active has meant playing racquetball on a weekly basis at LA Fitness or the Midway Y. “My oldest membership card at the Y was 1962, so I’ve been a member 57 years,” Lowery said. “Our sons were on the swimming team and went to Camp St. Croix. The Midway Y has been a big part of our family.”

He also competes in discus and shotput in the Senior Games, an equivalent of the Olympics for seniors.

“The Senior Games changed my life,” Lowery said. “When I was 85, I sank into a depression and felt like I was in a dark room I could never get out of. I felt like I had accomplished nothing in my life.” But as he learned about the Senior Games, he worked his way out of that depression.

The competition with others as well as with himself was a strong factor that moved him forward. He attended the nationals in Birmingham, Ala, in 2017. In June of this year he participated in Albuquerque, N.M., where he played singles and doubles racquetball and won gold in both. He took third in shotput and fourth in discus throwing. “It’s a lot of the stuff I did in high school,” he commented.

A year ago while he was competing at the Senior Games in Mankato, a young woman approached Lowery and asked Lowery if he would agree to be interviewed and filmed for an ad for Blue Cross Blue Shield.

“Nobody had ever asked me that before, and I thought why not?” he said. They shot video for four and a half hours and created a 30-second ad that ran for three months. BCBS later videotaped Lowery following his activities on a typical day, and those 12 hours of shooting resulted in a three-minute film. In mid-December of last year BCBS ran a full-page ad on the back page of the Star Triune of Lowery holding a discus.

Make it a habit

He also does strength training and aquarobics. Mary Ann, 83, has done aquarobics three times a week but had to slow down a little after she had a stroke in May. “That crimped my style a little bit, and I have only been going once a week,” she noted. She attributes the aquarobics workout to having helped her recover from the stroke. “The exercise just has to become a habit,” she said.

Mary Ann, who has a PhD in Education, taught home economics early in her career. “I was at the University of Minnesota when I finished up my career at the college or education. I worked in staff development for the extension service and worked with educators out in the counties,” she said. “It was a fun career.” Her home economics background also led the family to eat well-balanced meals. “I don’t think we have ever done anything radical, but we are just aware of serving sizes and that when you pick up a few pounds, you have to take them off right away,” she said.

For his part, Lowery said he was raised on the Pine Ridge Indian Reservation in South Dakota, where his parents were teachers. His family later moved to Rapid City, where he attended high school and college, getting a degree in geologic engineering.

“My first job out of college was with Exxon,” he said. “I did geology work in Casper, Wyo., then worked on a well in Montana. Then I really found my career in technical sales. I had an engineering background, and I liked people. I sold explosives to mines and quarries.”

Lowery joined the J. L. Shiely Co. He then ran a Frack sand company and eventually started his own company, Ag-Lime Sales, Inc. “Fine limestone dust was generated from crushing limestone,” he said. “We had a quarry on Grey Cloud Island. I ran that, as the sole employee, for 27 years. I shut it down when I was 87.”

However, he still maintains his office in the Griggs Building on University and goes there five to six times a week. The sign on his door reads “Lowery’s Man Cave.”

Get involved and keep learning

Besides going to his office, Lowery starts out each week with a group of friends that meets at a Dunn Brothers to drink coffee and discuss books. He also attends a 7:15 a.m. Toastmaster’s meeting, an organization he has belonged to for many years.