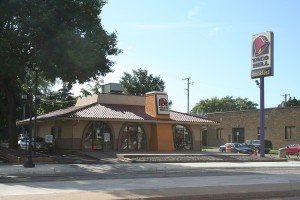 This Taco Bell building has been demolished and will be rebuilt.
Posted Wednesday, November 9, 2022 12:05 pm
By JANE McCLURE

A new Taco Bell restaurant is going up at 565 N. Snelling Ave., thanks to a successful court challenge by owner Border Foods. Neighbors were surprised that the longtime location was fenced off and then demolished this fall, with construction now underway on a new building.
Taco Bell operations have sparked controversy over the years, with neighbors upset about late-night noise, traffic and patron behavior. The use was also questioned when its site and much of the rest of North Snelling changed zoning to traditional neighborhood use, as a way to promote long-term walkable redevelopment. That study and a light rail station plan for the Snelling area were cited as reasons to now allow a new drive-through restaurant.
The old restaurant, which opened as Zapata, dated from 1973. Taco Bell owner Border Foods for years sought to rebuild or make changes to the aging structure. Border Foods argued that its latest plans would meet all of the needed requirements for a new conditional use permit, and that a new restaurant would be an improvement to the neighborhood with more distance from nearby homes, better traffic flow and a more attractive building. Those plans went through city process two years ago.
In September 2020, the St. Paul City Council upheld an appeal by Hamline Midway Coalition (HMC) and overturned a planning commission decision approving the planned new restaurant’s needed conditional use permit. The planning commission zoning committee had recommend denial of the permit.
HMC’s appeal stated, “Border Foods has deliberately chosen an auto-centric, non-conforming building plan. The applicant is also proposing 18 off-street parking spaces, more than 200 percent over the maximum allowed for restaurants within a light rail transit station area. Although this is a reduction from the existing 1973 site plan, we expect the city to evaluate development based on the standards in the 2040 St. Paul Comprehensive Plan.” The district council urged Border Foods to build a larger structure that would better serve more pedestrians and transit users.
The Planning Commission Zoning Committee recommended denial of the permit, saying it didn’t meet the required conditions. Another issue the committee raised is the difficulty in revoking a conditional use permit if there are violations. That’s been the case with the controversial Starbucks at Marshall and Snelling avenues, which caused traffic backups over the past several years before it closed its drive-through.
But the full planning commission approved the permit, with some commissioners questioning if objections were based more on restaurant clientele than on land use issues.
The city council decision meant Taco Bell could not rebuild, but had to continue operating in its 1973 building. That also allowed operations to continue under the existing conditional use permit, which allows for closing as late at 3 a.m. on weekends and 2 a.m. on weekdays. Some neighbors wanted the hours shortened.
Border Foods took the city to court, and won a judgment in October 2021. That then launched several months of design work and city staff site plan review, which led to demolition and the start of construction recently.
Ramsey County District Court Judge Laura Nelson found that the city council’s denial of the conditional use permit was unreasonable.
One issue cited is the reasons for denial, which included compliance with the city’s comprehensive plan and other area plans, and pedestrian safety. But those reasons were called out in the court ruling as subjective. The judge found that the new plans were in compliance with the city’s goals and plans as they sought to reduce the number of curb cuts and parking area.
An argument about neighborhood character was rejected, with points made about current character versus “aspirational” character. The judgment cited the number of existing auto-oriented uses around Taco Bell.
“Both parties recognize that the area aspires to be more walkable, more pedestrian friendly, and more environmentally friendly. However, the parties also recognize that other similar auto-oriented uses exist near the proposed use,” the judgment stated.
Another key issue in the case is a longtime state statute requiring action on zoning requests within 60 days or up to 120 days with an extension. Failure to deny a request within that time is an approval of the request. Denials must state in writing the reasons at the time of denial. While the council vote was within the time frame, the written resolution memorializing the decision and explaining the denial came after the 120 days expired.