Is there enough parking at former Sholom site? 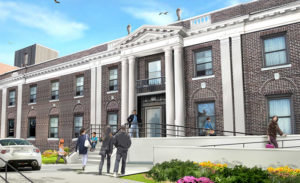 City staff, neighbors and board members debate whether 80 spots is enough for 150 apartments

The former Sholom Home, which has been vacant for more than a decade, will be redeveloped as a 150-unit apartment building.

The St. Paul Board of Zoning Appeals (BZA) Feb. 24, 2020 unanimously approved two variances needed by developer Midway Community Group LLC for the conversion. That decision is final unless it is appealed to the St. Paul City Council within 10 days. As of the Monitor deadline no appeal had been filed.

Sholom closed in 2009 when a new facility was built in the city’s West End. Its old complex consists of four buildings, the oldest one dating from 1922 and the newest from 1970.

Several developers have looked at the property since the Sholom moved out. A conditional use permit allowing 170 dwelling units was granted in 2015 but has expired.

How such a new use will coexist across the street from the Minnesota State Fairgrounds and just a few blocks west of busy Como Park, remains to be seen. The developers contend that the new housing will be an option for people who want a vehicle-free lifestyle, with its proximity to A Line rapid bus service and other transit. Project foes are skeptical.

The former nursing home, which is on a site zoned for RM2 multi-family residential, needs two variances for the project to go ahead. One is for unit size. The zoning code requires a minimum lot size of 1,500 square feet per unit. The developer is proposing 882 square feet of lot area per unit, for a variance of 678 square feet per unit.

Another variance, which sparked the most debate, is for parking. The zoning code requires 166 off-street parking spaces, but 80 enclosed and lot spaces are proposed, for a variance of 86 parking spaces. Parking was a flash point during the Feb. 24 debate. City staff recommended denial of the variances. Matthew Graybar of the BZA staff said that adding more than 80 vehicles “would flood the area.”

One wrinkle in the issue is this: the property’s underlying RM residential multifamily zoning could face changes as a result of an ongoing St. Paul Planning Commission study. The study and a future city council decision to change the zoning code could mean the site could accommodate a new five-story building with more than 350 apartments if the Sholom complex came down and a new multi-family structure went up. That study, and a second study calling for relaxed parking standards citywide, could compound the area’s parking problems

BZA members debated the issues at length and voted on the variances separately. They made requests including asking the developers to provide incentives for transit use. Some Snelling Ave.developers in recent months have given tenants a bus card at the start of their leases.

“The problem is where this site is,” said board member Luis Rangel-Morales. “You can provide all kinds of incentives, but people will still drive.”

“That area really struggles with parking issues,” said board member Daniel Miller. But board members ultimately agreed that the project should go ahead, noting that if parking is a problem the developers will have to find a solution or lose residents.

Will lack of parking affect how many rent?

The community development corporation, Northeast Neighborhoods Development Corporation, is a development partner. Its executive director, Chuck Repke, said developers wouldn’t be moving ahead with the project if they didn’t think it was viable. The developers met four times with neighbors to discuss the project.

He predicted many residents won’t own vehicles but will rely on transit and possibly a shared-use vehicle or vehicles at the building. “You’re not going to find better transit than Snelling Ave.,” Repke said.

“Clearly there are limitations on parking,” Repke said. “I’ve been there during the state fair and it is insane.”

One neighbor, Kathy Kelly, appeared in opposition to express concerns about parking. She said her block of Midway Parkway is already greatly affected by spillover parking from the frequent uses of the fairground and park activities. “Now summer weekends will be every single day of our lives,” she said.

Repke said the developers would personally work with neighbors on parking issues and even help them submit applications for residential permit parking.