Telling his own children about George Floyd’s death was one of hardest things Rev. Ronald Bell ever did 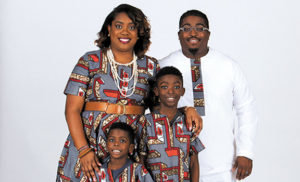 Reverend Dr. Ronald Bell Jr. with his wife, Dr. Eboni Bell, and his two sons. Bell encouraged them to keep moving and get out to help the community by handing out Trauma Bags in order to educate others on guiding children through trauma they have experienced. (Photo submitted)

When Reverend Dr. Ronald Bell Jr. sat down with his two sons (ages five and eight) to explain the death of George Floyd and the events that followed, one burst into tears and the other questioned why this was happening.

He wanted to know why a police officer would do this to anybody.

“It was one of the hardest moments in my life,” Bell said. “I could see my five year old’s faith in authority, white people and the system crumble in front of me as I tried to explain.”

The death of George Floyd has impacted many – and especially, children and young adults who may not fully understand what has been going on throughout the United States or right at home the past couple of weeks. Bell is a pastor for Camphor Memorial United Methodist at 585 Fuller Ave in St. Paul. He studied ministry for young adults at Lancaster Theological Seminary in Lancaster, Penn. He believes that parents need to have a conversation with their children about what is going on.

“They are experiencing this fundamentally different than adults are,” Bell said. “As a child, they don’t differentiate that all police aren’t bad, all white folk aren’t bad, so we’ve got to help them get moving in a way that is healing.”

Be vulnerable with kids and focus on truth

After explaining what happened to his boys, Bell had them hand out trauma healing bags in order to engage them physically in helping the community. These bags included things like toys, coloring books, information for parents about children who have been through trauma and books with people of color as leads. All of these were aimed at helping children to heal from the trauma that they have witnessed and to begin to feel more like kids again. By the end of the day, they had helped give out more than 210 trauma healing bags to those in need. Donations for the bags and other resources can be made at the church’s website, CamphorConnects.com.

“It was important to them [Bell’s children] to hear me say ‘Here’s who we are as a family, we love people, we honor people, we serve, protect and help people. That’s who we are,’” Bell said.

Bell believes that parents should be vulnerable when having this conversation with their children. And, to focus on the truth. Parents don’t need to go into details but talk about what’s right and wrong. His advice for everyone going through these difficult times is to remember that you are here in this very specific time and place for a reason, and to trust the power of time.

Immediately after watching the video of George Floyd’s death, Bell reached out to find those who were recording. He hoped that he would be able to get counseling or help in general for the people who were there. Going through trauma not only impacts the emotional state, but also the physical being of a person, he pointed out. According to a study done by the Substance Abuse and Mental Health Services Administration, emotional trauma can set off the body’s stress responses.

“These people are sitting with trauma that is undealt with, and because of this, their bodies become acidic and are more susceptible to diseases like COVID-19,” Bell said.

Although Bell believes that there are some things that can be done to start healing from the trauma, he believes that people should sit in the discomfort that these times bring. Bell encourages not only young adults, but everyone to get engaged physically in the healing of the community. And, to ask themselves how they can get out and serve.

“It can be as easy as going to a food kitchen and just serving or doing artwork, but how are you physically engaged in this moment?” asked Bell. “I think the danger of this moment is to stay stagnant.”

‘We weren’t able to move away’

Bell observed that there’s a cycle that must be broken. This time, there wasn’t just a hashtag and march before people moved on. Protests happened globally and are still happening in many states. Four hundred National Guard troops were sent out to protect national monuments in Washington. D.C. on June 24, 2020. Protestors camped outside of New York’s City Hall the night of June 23, 2020. Both the protests and trauma surrounding the death of George Floyd demand to be seen and heard.

“With George Floyd, we weren’t able to move away,” Bell said. “This is the first time that the globe has had to sit with and acknowledge that this problem is systemic.”