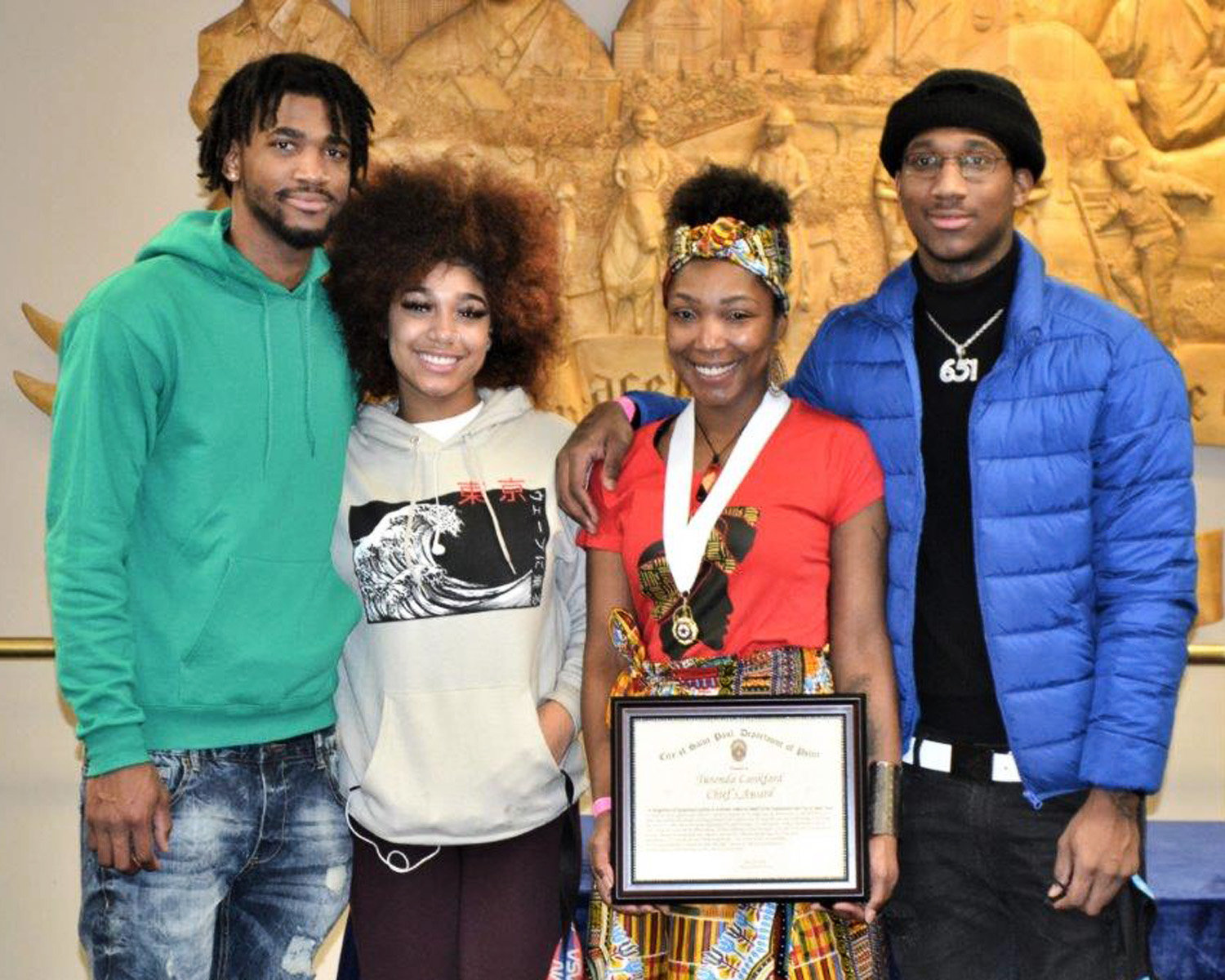 Turonda (last name withheld by request) stands with her family and accepts the Chief’s Award for helping a young woman in a mental health crisis in April 2020. She has dealt with her own mental health struggles and used what she has learned to help the young woman. (Photo submitted) 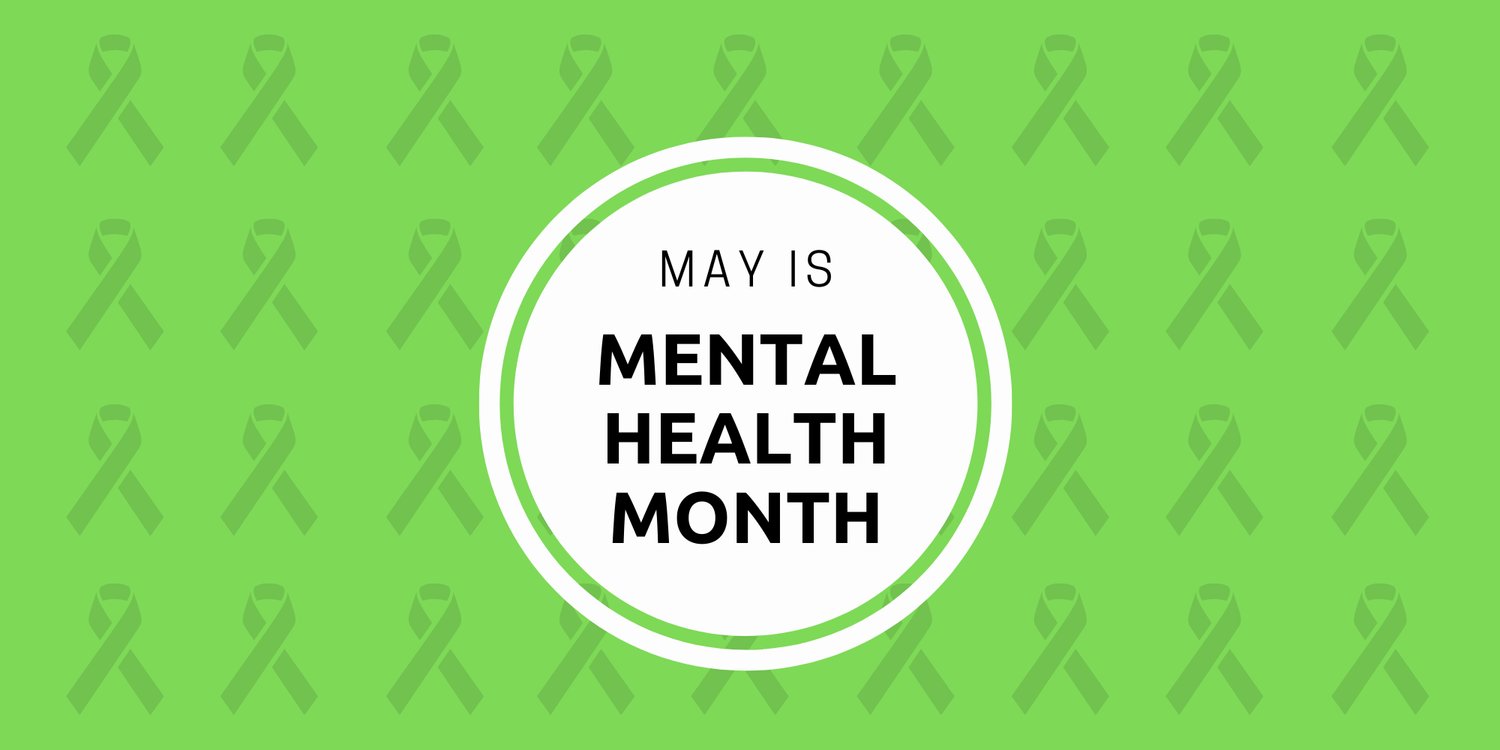 “When I got close enough, I wrapped my arm around her back and tried to console her. I’ve been depressed before myself, and I thought it was important to talk to her.””
~ Turonda
HOW TO HELP

• Give hope and reassurance - try not to give advice.

• Remind them mental illnesses can be treated and people can get better.

• Assure them that they are not alone.

• Tell the person you are sorry they are in such pain.

• Understand that someone can’t just “pull themselves out of it.”

• Recognize the person is not their illness; they have dreams, strengths and gifts to share with others.

NAMI Minnesota (National Alliance on Mental Illness) has set up a wide variety of free online mental health classes for May and June. They include classes such as Hope for Recovery, Transitions, Ending the Silence, Understanding Early Episode Psychosis for Families, In Our Own Voice, Family to Family, Positive Psychology, Creating Caring Communities, a suicide prevention class called QPR – Question, Persuade and Refer, a special QPR class for Agricultural Communities and many more.

The classes are designed for family members and caregivers, persons living with a mental illness, service providers, and also the general public. Find a complete listing of these classes and how to join in by going to namimn.org and clicking on “Classes” or go straight to https://namimn.org/education-public-awareness/classes/scheduled/.

Turonda (last name withheld by request) got in her car one afternoon in April 2020, buckled up, and double checked to make sure she had everything she needed for a visit to her parents. The COVID-19 lock down was just six weeks old.
A busy mom of three with a full-time job as a nursing assistant, Turonda had a lot on her mind. As she drove across a familiar bridge in her North End neighborhood, something caught her eye and she glanced again over her left shoulder. There was a young woman standing on the outside bridge rail, apparently ready to jump.
Turonda said, “When people are suicidal, it’s a cry for help. I pulled over, and walked across the street. She was crying, and had a look of desperation. I approached her carefully. There wasn’t much traffic, so it was strangely quiet. When I got close enough, I wrapped my arm around her back and tried to console her. I’ve been deeply depressed before myself, and I thought it was important to talk to her.
“From what she said, she may have been in an abusive relationship. Maybe she lost her job, or custody of her children. So many things can go wrong that are beyond our control. Suicide can seem like the only option in the moment, but it’s not.”
When Turonda first experienced depression 15 years ago, she felt her life was caving in around her. She attempted suicide herself, in the throes of an ongoing custody battle and untreated post-partum depression. She said, “In 2006, I didn’t know what post-partum depression was or how to get help; I just thought I was a bad mom.
“I was lucky to have a loving support system, but I wasn’t telling my family and friends how depressed I was. Women are acculturated to believe they have to be so strong.”

Silent too long
It took Turonda years to get the professional help she needed for her own depression. Help came in the form of therapy, short-term medication, and a self-care regimen that includes regular walks through her North End neighborhood.
As she stood on the bridge that afternoon, bystanders gathered, someone called 911, and paramedics arrived. A life was saved, but Turonda understands that the journey to better mental health is usually a long one. A short stay in a psychiatric unit will not end suicidal thoughts.
She said, “When the paramedics brought the woman to the inside of the bridge, I hugged her. I hope she was has been able to find some peace, and to get the help she needs.”

A family celebration
Because of what happened that day, Turonda was nominated by an officer on the scene for a Chief’s Award – an award given for exceptional actions or activities taken on behalf of the police department and/or the city of Saint Paul.
The award presentation is usually a public celebration but because of COVD-19, Turonda’s was a private ceremony. She said, “I invited my parents, my fiancé, and my three kids. We were escorted into the police station, and Police Chief Todd Axtell presented me with a medal and a framed declaration.
“There were a couple of other staff present, and everyone was excited because they hadn’t done this ceremony since the pandemic started.
“There has been a lack of trust regarding law enforcement and the Black community. It felt really good to have a positive experience with members of the police department. I was especially glad my kids could be there.”

Empathy grows from
experience
When Turonda looks back at her own struggle with depression, she said, “At my worst, I felt like I didn’t have anything to live for besides my kids. I came to realize that self-worth had to be based on more than that. My mental health improved when I started to find out who I was. You’re no good to anyone else if you’re not good to you.”
She concluded, “Certain times of year can be especially hard for people for different reasons. The worst season for me was always early spring, which was the same time of year that I encountered the woman on the bridge.”

Mental health resources
Sue Abderholden is the executive director of the National Alliance on Mental Illness Minnesota. She said, “Between COVID-19 and the George Floyd murder trial, this is a really tough time. If you know someone is struggling, reach in to them. People have a really hard time reaching out when they’re depressed.”
If you or someone else is at risk of suicide, call the National Suicide Prevention Lifeline at 800.273.8255 or text MN to 741741. If you or someone else is at imminent risk, call 911 and ask for a Crisis Intervention Team (CIT) officer.
NAMI offers a wide range of classes and support groups on mental health issues and concerns. Visit their website at www.namimn.org to learn more.