If it makes noise or flies, it is illegal in Minnesota 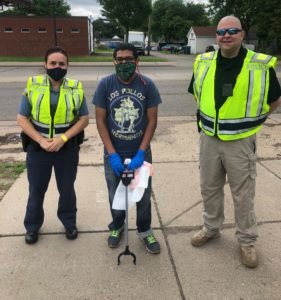 With COVID-19 still prevalent in Minnesota, most community fireworks were cancelled throughout the Twin Cities. However, fireworks have still been lighting up the skies with loud booms and cracks echoing off of neighborhood houses. Nationwide, illegal firework use went up 11 percent in the last few months of quarantine, according to Patricia Lammers.

Last year, the St. Paul Police Department received 191 complaints about fireworks from June 1 to June 30. This year, in the same time span, they received 664 firework complaints.

“Most of it is not designed to be destructive, but it sometimes can be,” Lammers said, “particularly if we’ve had a really dry summer.”

Lammers has worked at the St. Paul Police Department as a Crime Prevention Coordinator for three years. It’s her job to inform and educate communities on how to reduce crime in their areas. Working mostly in the North End area, she teaches classes on things like personal safety. Lammers mentioned that these illegal fireworks were universal throughout St. Paul; no neighborhood was particularly worse than the other. However, there are no classes on firework safety or illegal fireworks at the department.

Illegal firework use normally skyrockets around the Fourth of July. And, the St. Paul Police Department expected higher numbers this year due to it falling on a Saturday and fewer professional shows. The department dedicated one squad car solely to patrol the neighborhoods in order to watch out for illegal firework use June 26 to July 4, 2020. The department does not create checkpoints coming from other states, but they do look for noise disturbances or other complaints on neighborhood watch pages on Facebook. They also hand out pamphlets including information on which fireworks are illegal in Minnesota.

“If it makes noise or it flies, it’s illegal here in Minnesota,” Lammers said.

Is it a gunshot or firework?

The Uprising has also been creating more tension and anxiety around whether what a citizen hears is an illegal firework or gun shot. More and more calls have been coming in as “shots fired” that actually turn out to be fireworks. However, Lammers encouraged people to still call the non-emergency number for the St. Paul Police Department, 651-291-1111.

Even though Lammers said that majority of the calls for illegal fireworks are non-violent, they can still have a negative impact. For those suffering from Post Traumatic Stress Disorder (PTSD), fireworks can set off panic attacks or other stressors. Lammers said there have been cases where pets have had heart attacks or families will need to medically induce sleep for the night because they get too anxious. When these fireworks come as a shock, this can make it even more difficult.

“We try to educate people on: yes, it’s fun for you, but it’s not necessarily fun for everyone,” Lammers said.

If people do have neighbors who are lighting off illegal fireworks, Lammers encourages using a neighborly approach before calling the number above. Often, it’s families that aren’t aware the fireworks they purchased in another state are illegal in Minnesota. Using fireworks to damage property or cause harm is very unlikely according to Lammers. But, of course, if the situation seems or becomes violent or dangerous, Lammers says that people should call the non-emergency number listed above.

Abu Nayeem, a community organizer in Frogtown, St. Paul, also agrees with the neighborly approach and mitigating harm. Nayeem has recently started working on a clean-up crew called the “Frogtown Cleanup Squad.” This group is made up of volunteers from various neighborhoods around the area that keep the neighborhoods clean of trash.

Their GoFundMe page, gofundme.com/f/frogtown-cleanup-squad, states, “The true value of the initiative is not the amount of trash collected, but our individual effort in giving back to our planet and community, and building relationships with neighbors.”

This community-based organization is aimed toward empowering, connecting, and feeling community pride. They want to give an opportunity for a community to take back ownership of their own neighborhoods. Nayeem believes that illegal fireworks could harm neighbors and therefore harm the overall community. According to the Neighborhood Safety Network, 243 people attend the emergency room every day from injuries caused by fireworks in the month surrounding the Fourth of July. Nayeem also says that firework debris not properly taken care of can harm pets.

“I think what people may not understand is that the fumes from fireworks are rather toxic, and if not properly discarded, it may poison animals, such as cats,” Nayeem said.