Photographer Eric Mueller has been at work on a personal project called Family Resemblance since 2016. “My goal is to document and celebrate people who are genetically related,” Mueller said, “and who bear a strong resemblance to one another.” To date, Mueller has photographed almost 300 people in 120 sittings, and he plans to do many more. 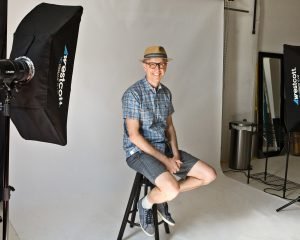 Why the interest in family resemblance? “I was adopted as a kid,” Mueller said, “so I don’t look like anyone in my family.” He was quick to add that his adoption experience was extremely positive; he just finds himself drawn to explore the terrain of family through the lens of this project.

Why the interest in family resemblance? “I was adopted as a kid,” Mueller said, “so I don’t look like anyone in my family.” He was quick to add that his adoption experience was extremely positive; he just finds himself drawn to explore the terrain of family through the lens of this project. 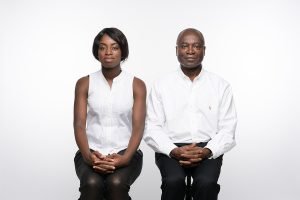 Photo left: In each Family Resemblance session, Mueller shoots three different types of portraits. The first set is looking at the camera straight-on without much emotion. Pictured left to right are daughter Stefani Asante-Totimeh and father, Kwame Asante-Mensah. (Photo by Eric Mueller)

Mueller said, “While I don’t yet know if the work will evolve into a book, a gallery exhibit, or an electronic platform, I feel invigorated by the sessions.” 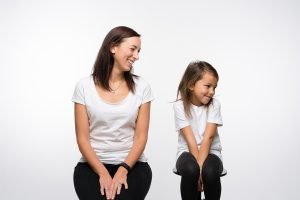 Photo left: The second set is taken while the subjects are talking or otherwise interacting with each other. Pictured left to right are mother Tara Kolberg and daughter Mikaia Kolberg. (Photo by Eric Mueller)

The project started, as most projects do, as a somewhere-out-in-the-distance thought. Mueller explained, “In 2010, I started searching for my birth mother. I learned that she had passed away, never married, and had no other children. It seemed like kind of a dead end—but then I learned that she had a cousin, and that woman was still alive.” 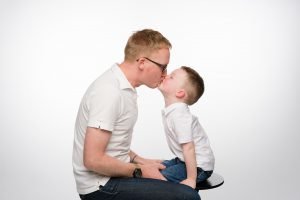 Photo left: In the third set, Mueller asks the subjects what they want to do. Pictured left to right are father Lee Whiting and son Ike Whiting. (Photo by Eric Mueller)

“I was able to arrange a meeting with her, with the help of Lutheran Social Services. The cousin brought a big box of things to our meeting that had belonged to my birth mother, including photos, and I could see a strong family resemblance between us.”

The project got a jump-start when Mueller was approached by TPT to be featured on their television show, MN Original. He explained, “I shared the story of my search for my birth mother with the producer. She wanted to film me shooting what would become the first session of the Family Resemblance Project, which I had mentioned was something I was just thinking about exploring. That was about right around Labor Day 2016, and I’ve been rolling ever since.”

To sign up for a session of Family Resemblance, visit https://slotted.co/famrespro. A session lasts 30 minutes, and participants are asked to come dressed in white. All of the sessions take place in Mueller’s studio, on the second floor of the 550 Vandalia Building. Mueller uses a white background and flat lighting, so there’s nothing to detract from the power of the faces and the family resemblance they share.

As a thank you for participating in the project, Mueller makes each participant an 8x10” enlargement of their favorite shot.

“I think that people have responded really well to this project,” he said. “Some have traveled significant distances to participate, or have requested special dates around holidays like Mother’s Day (when all of the available slots filled in a flash.)

Mueller concluded, ”I would love viewers to look at these photos one day and say, “Hey, there’s somebody who looks like me!”