All Photos and Story By JAN WILLMS 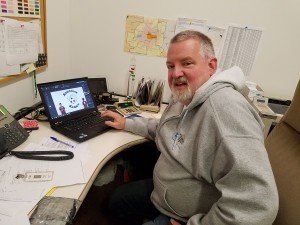 Paul Ramsour (photo right), Executive Director of Elpis Enterprises, believes there is no reason to let the fact that you don’t know how to do something stand in your way.

He demonstrated that when he started fundraising in the early 90s for Elpis, a program that helps homeless and at-risk youth learn skills in screen design and woodworking as well as preparing them for further employment.

“My background was in hospitality,” he said. “I had no experience working with youth, screen printing or woodworking. Those were my biggest challenges.”

Ramsour was helping the Junior Chamber of Commerce (Jaycees) in Minneapolis fundraise for a youth development program for kids at risk. “I was raising money to fund primarily community projects the Jaycees were involved in,” he said. “But they had some extra money and wanted to have their own youth programs, instead of just granting money away, so they asked me to help design some. Elpis was set up as a special nonprofit organization in 2002, and we moved to St. Paul in 2004.” The organization now occupies 3600 square feet of a building at 550 Vandalia St. The location features a screen printing section, a computer lab that can double as a workroom, a woodworking section that has an assembly area and a general meeting room. “It’s not a huge space, but big enough to do a few things,” Ramsour noted.

“Our focus is on work-readiness,” he continued, describing the mission of Elpis. “We work specifically with kids at risk of homelessness, or who have experienced homelessness. We help level the playing field for them. Some youth who are living in supportive housing need a little help with their resume and help to understand what work expectations are all about.”

The program offers a three-month internship for youths between the ages of 16 and 23. They must be referred to Elpis through a youth agency, housing program, or drop-in center. 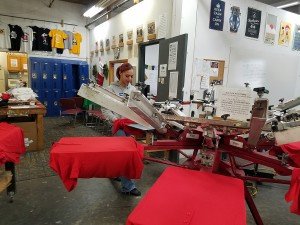 Photo left: Lashay Declerq-Ransom is shown printing t-shirts at Elpis, which has a full-service screen-printing company—printing custom t-shirts, bags, and apparel. The program offers a three-month internship for youths between the ages of 16 and 23, all of whom are referred to Elpis through a youth agency, housing program, or drop-in center.

“Being a part of our program can help add to their resume and assist them in getting their next job opportunity,” Ramsour said. “We do our work in the context of social enterprise, so we created these small businesses and have young people learn what is expected on a daily basis, be part of a team and communicate and follow through. Those are all transferable skills for the next job opportunity.” 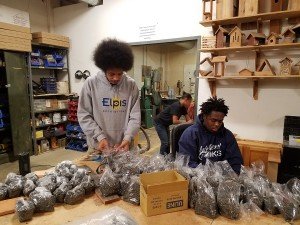 Photo right: Ali Everett (standing left) and Willie Harris are two current interns at Elpis Enterprises. They are shown packaging birdseed for bird feeders which Elpis manufactures out of repurposed and recut cedar from old fences. They also make other outdoor items such as planter boxes.

Elpis has a full-service screen-printing company—printing custom t-shirts, bags, and apparel. The organization also has a small manufacturing operation that recycles cedar fencing. “We work directly with fence contractors,” Ramsour explained. “When they take down an old fence, they recycle that wood through us. We repurpose it or recut it, and we have designed and created a line of cedar products, mostly outdoor things like bird feeders and planter boxes.” 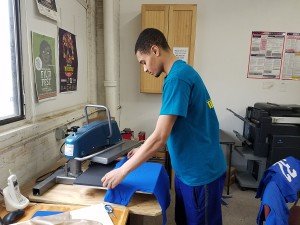 Photo left: Arione Farrar has been making t-shirts for the past three to four years since he was in high school. But he wanted to learn some things about screen printing and, following his internship, he has been hired on by Elpis.

Ramsour said that through Elpis, the participants do experiential workshops out in the community. “We take the assembly process out and set it up, and then kids or adults—mostly kids—at Parks and Rec or nature programs, step up to the table and build their own bird feeder. They take it home with them. That building event was facilitated by the youth in our program as a work experience.”

He said this project offers the interns at Elpis an opportunity to facilitate a group and focus on customer service. “We talk about that a lot and also do some marketing and sales work. The young people have help with bookkeeping and all aspects of a small business.”

Most of the screen printing is done at the Elpis location, although youth participants do go out in the community and do some simple one-color screen printing projects. He said they created small one-color printers that they take out in the neighborhoods, doing events with other companies that are having open houses. “We come in and print shirts for their guests or those attending the open house. We do that all the time, actually.”

According to Ramsour, much of the training offered to the interns is on-the-job and experiential. They learn in the process of doing the job. “When you print t-shirts, you have a lot of time to talk,” he noted. “Yesterday we had a lively discussion about pricing and how that works.”

He stated that good ideas result from these discussions. “There is good learning on both ends,” he claimed. “Most of the changes we have made at Elpis over the years have come from the young people.” There are usually about eight interns participating at a time over a three-month period. Many go on to become regular staff.

“Our goal is to work with 30 to 40 youths a year,” Ramsour said. The other area interns are involved in is e-commerce. “All of our products are for sale through two e-commerce sites,” he added. “Our next focus, from a learning standpoint, is to get young people involved in managing those e-commerce sites.” He emphasized that understanding e-commerce and how it works and how to navigate in those systems is really important, as e-commerce is here to stay. “Everything you can do in a brick and mortar store you can do in an e-store,” he said.

Elpis is located in the middle of what is called the Creative Enterprise Zone, according to Ramsour. “There are a lot of just really creative businesses that do these creative things, and so they coined this phrase to draw attention to it and celebrate all the businesses that do creative work in this area.”

He said the youth attending Elpis all have some kind of education plan. Some are in school or working at second jobs. Some are pursuing training in other post-secondary programs.

Arione Farrar has already been making t-shirts for the past three to four years since he was in high school. But he wanted to learn some things about screen printing and, following his internship, he has been hired on by Elpis. “I’m trying to figure out how to run a business like a store,” Farrar said.

“He has an interest in the apparel business and design, and we are trying to help foster that and do what we can,” Ramsour said. “And we recently got some new equipment, so Arione has been helping us understand our new press and how to work with vinyl.”

Lashay Declercq-Ransom has worked her way from being an intern to becoming the screen print coordinator running the whole screen print side of Elpis. “We have a six-color press and can do six shirts at a time,” she explained. She points to another press that can do four shirts at once.

“Everything we do is with water-based ink,” she continued. “It feels like more a smooth print to the t-shirt, and it’s better for the environment and easier to work with.”

“I used to be homeless,” she said. “Now I have housing, and I’m going to MCTC to be a nurse. Elpis works well with my hours.” She recalled being out at a Prince Festival where Sounds of Blackness was performing, and they were wearing shirts that had been printed at Elpis. “The coolest part for me is when you see shirts you printed out in the community,” she added. 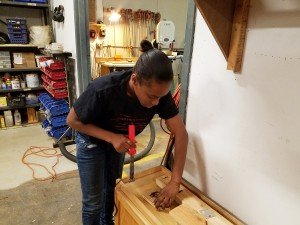 Shadaria Brown (photo left) also moved up from being an intern to becoming the woodshop coordinator. “I monitor interns, cut all the wood, get the products ready, organize things and just try to make sure the wood side is good and has all it needs,” she said. “I love being here and have been here five years. I started off as an intern and worked my way up to the top.”

Ramsour is proud of his interns and their paths toward success. He said Elpis, which is a Greek word meaning hope, looks for support in several ways, mostly through social enterprise. “We want people to try us out if they have t-shirts they want printed,” he said. “If a church group or school group would like a woodworking activity, we can come out. Of course, like any nonprofit, we will always take cash, but social enterprise is the really big need.” He said having individuals come and speak to the interns about their experiences and how they succeeded in their careers is a big benefit to the organization. 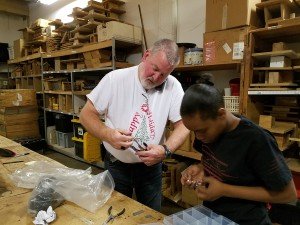 And when he speaks of Elpis, he reverts to not letting lack of knowledge or experience stand in the way of success. He later went on to get his master’s in youth development from the University of Minnesota, but he recalls when he first started this organization with no background in the field. “If you can read and reason and think critically about what it is you are doing, there is no reason not to learn how to do anything. That’s what we try to instill at Elpis, and we have learned together.”