News for everyone, delivered to everyone
BUS TOUR 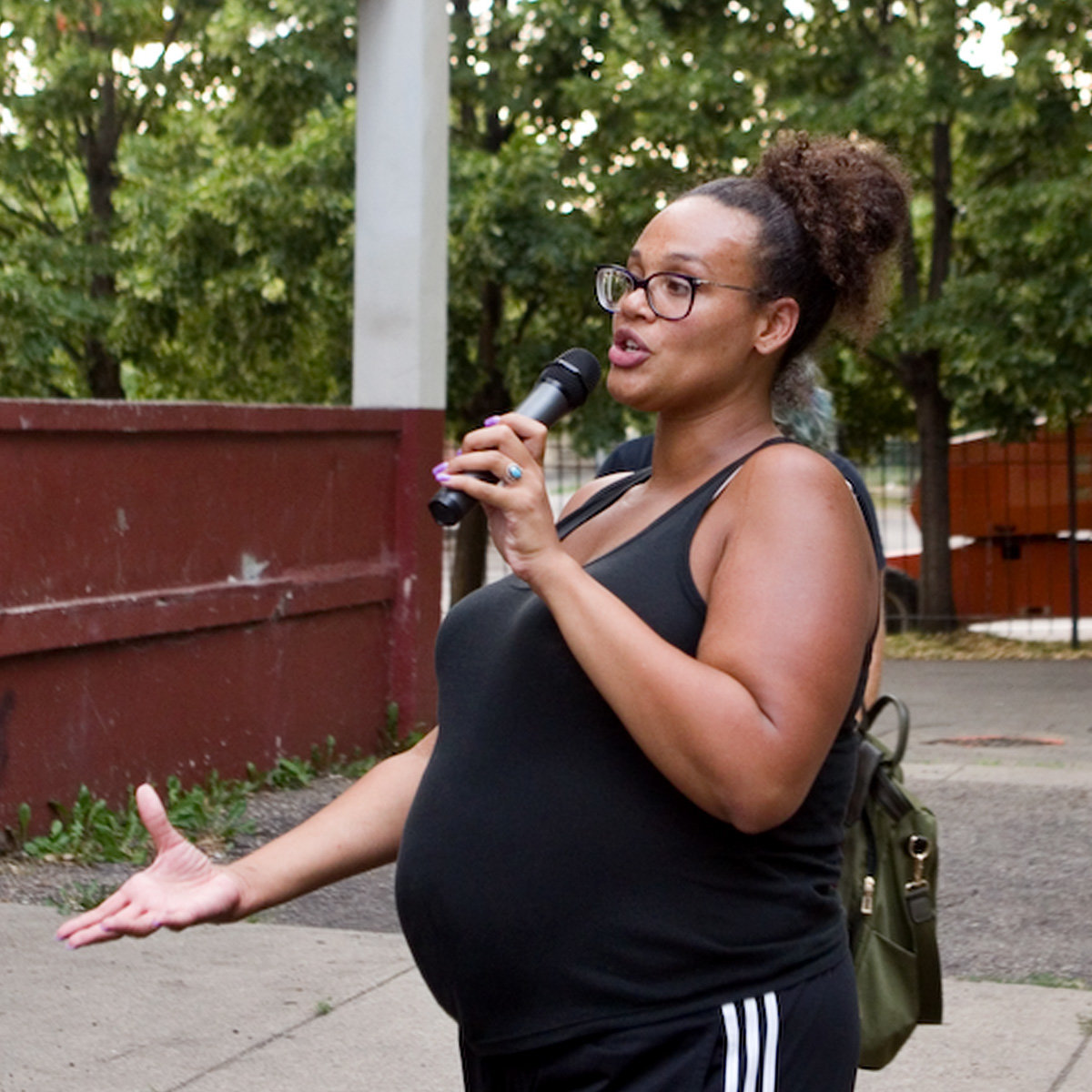 FNA’s Anti-Displacement Community Organizer Danielle Swift, said, “What makes me most excited about this project is the opportunity to be creative around affordable housing and community ownership. The city of Saint Paul will transfer ownership of 652 Sherburne to Model Cities. FNA will be a working partner in this project along with Hope Community’s Housing Justice Center and Historic Saint Paul.” (Photo by Margie O’Loughlin) 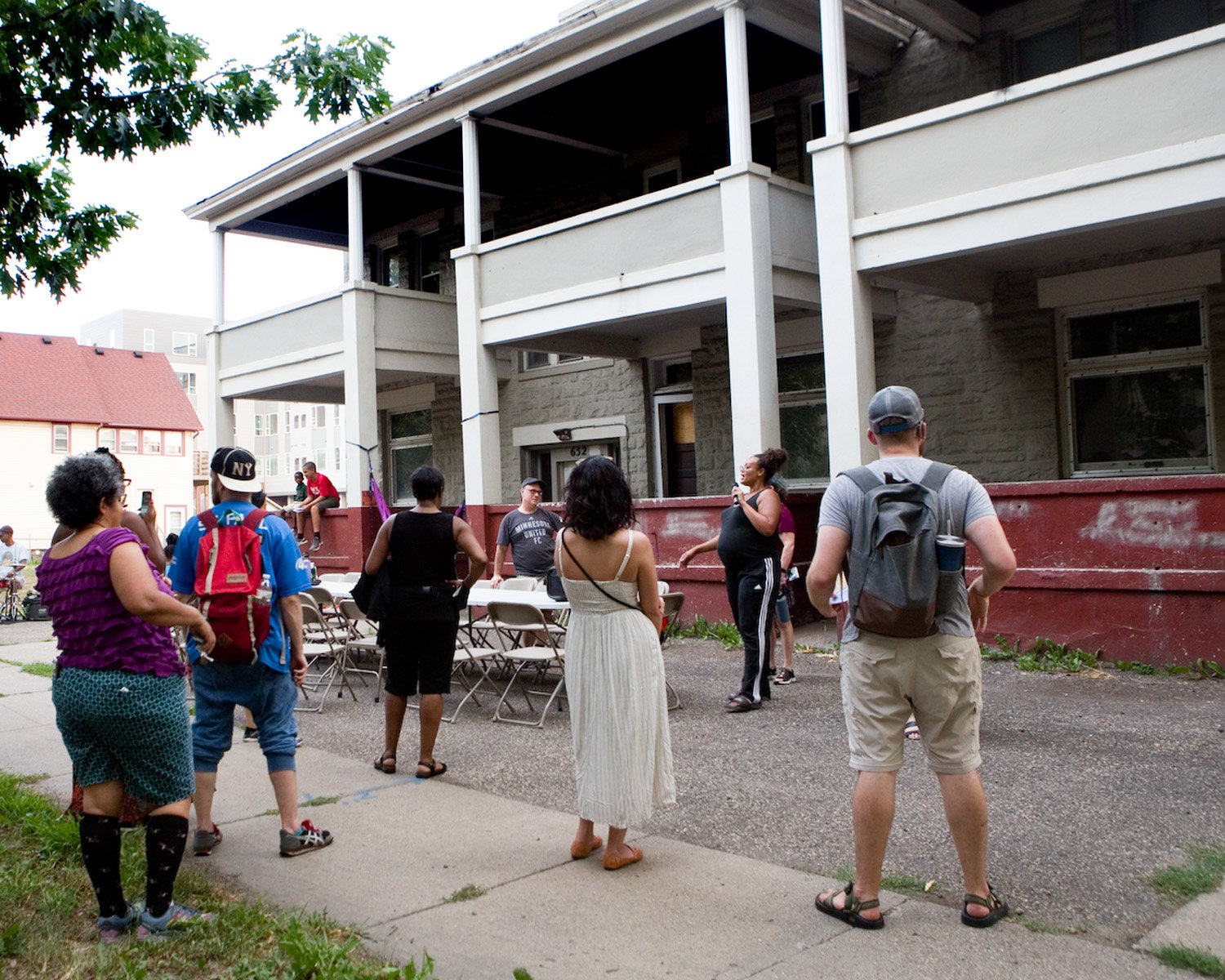 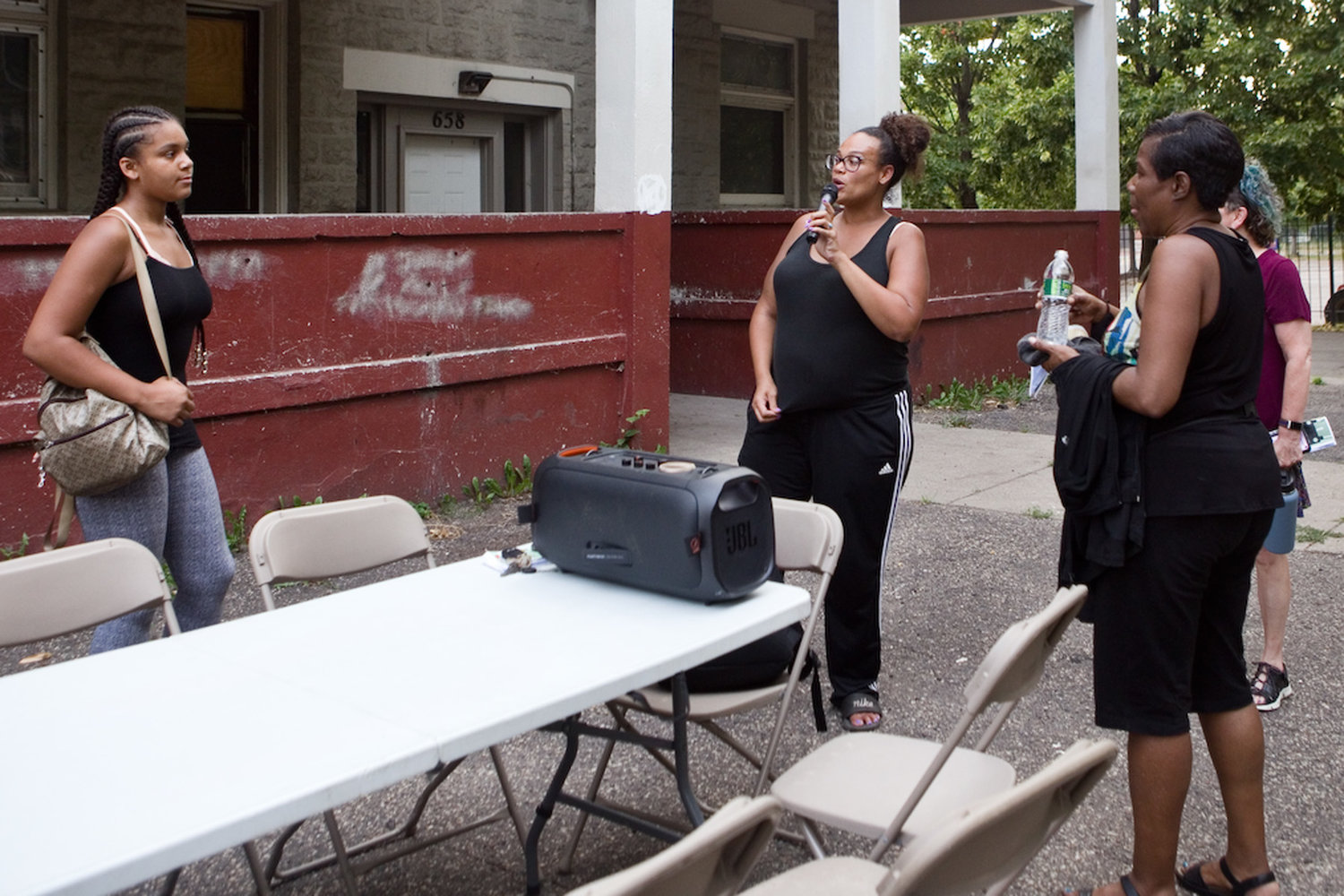 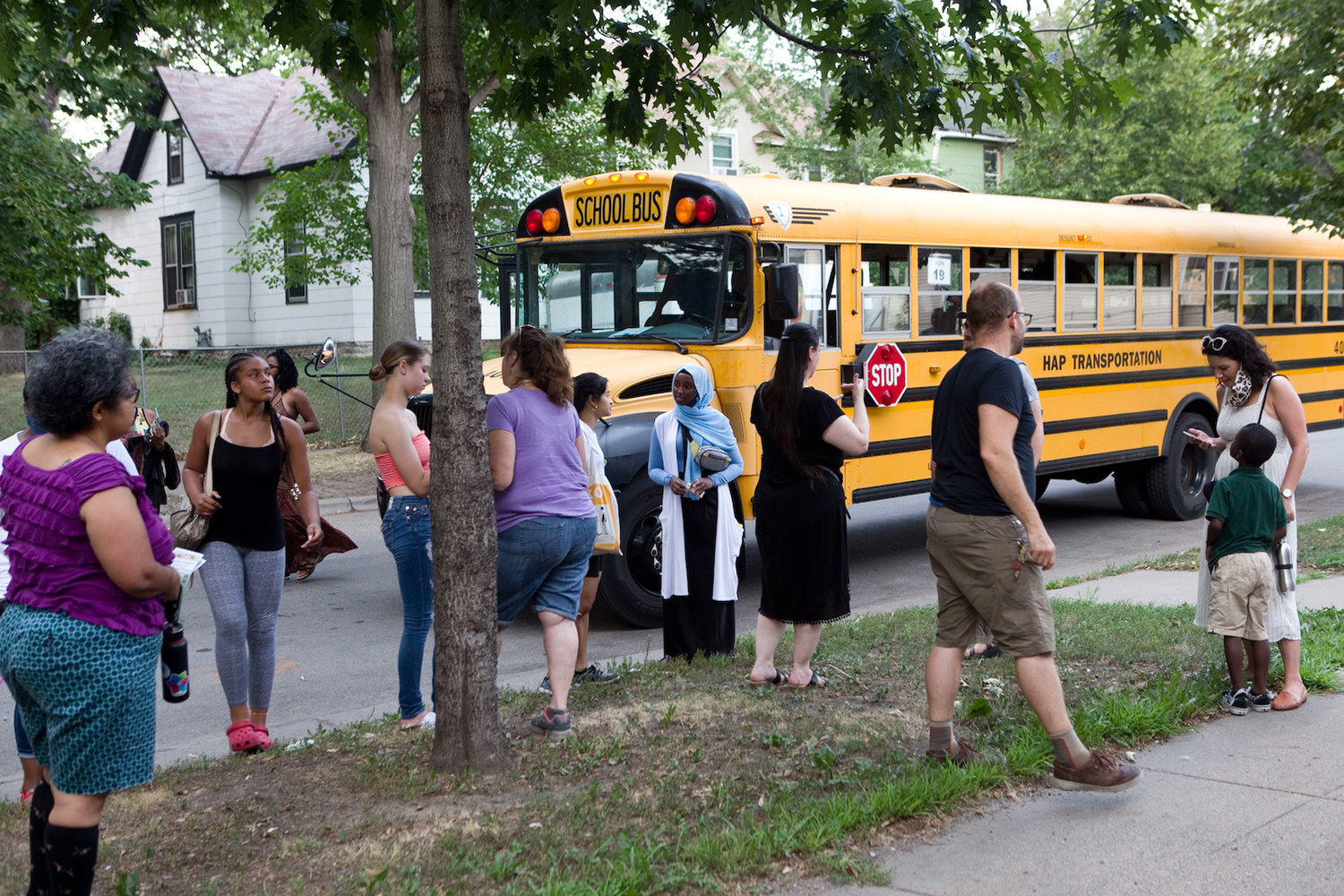 The Frogtown Neighborhood Association is part of a city-wide network of organizations that centers every aspect of their work around equity. Organizations within this Equity in Place (EIP) network understand that the problems plaguing our community are deeply rooted in systematic oppression and, as a result, have led to unjust patterns of resource allocation. FNA aims to correct these unjust patterns within Frogtown through grassroots initiatives created by community working for community.

~ From the Frogtown Neighborhood

About two dozen people boarded a big yellow bus on a hot, sticky night to discuss the prospects for Development without Displacement in the Frogtown, Rondo, and Summit University neighborhoods. Frogtown Neighborhood Association (FNA) sponsored the bus tour through Frogtown and Rondo on Tuesday, July 27, 2021.
Six stops were included on the tour, and each raised a different question. While the questions were different, the answer was always the same: there is no power for change greater than a community discovering what it cares about.

Gentrification 101
Gentrification is a word (and an action) that has been around for a long time. When investments start to come into under-resourced communities like Frogtown and Rondo, current residents may be squeezed out due to rising taxes, rising rents, and a sense of no longer belonging.
New business owners, home owners, and renters become more interested in under-resourced neighborhoods once improvements are made.
While better access to public transportation, grocery stores, and other basic amenities are positive, FNA believes that gentrification equals displacement. Executive co-director Caty Royce said, “We know that development and investment are needed in our neighborhoods, but we believe that community members must be involved in the decision making process.”

True affordable housing needed
Stop #1 on the bus tour was the Alatus project, which is slated to create 288 units of rental housing on a long-vacant piece of land just south of University on Lexington Avenue. It has gotten thumbs up from proponents of increasing housing density –but thumbs down from affordable housing advocates like FNA.
Under pressure from FNA, the project developer has agreed to set aside half the units for families earning slightly above 60% of area median income. That translates into monthly studio rentals of about $1,100, in a community where 40% of families live on less than $35,000 annually.
Saint Paul City Council members have criticized the Alatus project for lacking true affordability representative of incomes in the Frogtown and Summit-University neighborhood, but the development has not sought any form of public subsidy that would guarantee deeper affordability. The land belongs to the Wilder Foundation, and the future of the project is uncertain.

More opportunities for BIPOC developers
The second stop on the tour was a vacant lot on the southeast corner of Oxford Avenue and Marshall Street. The corner lot was home to a Model City eight-plex until the 2008 financial crisis, when the city of Saint Paul had it demolished.
Tenecia Johnson and her husband Mike live directly across the street, in a home they have owned for more than 10 years. She said, “I grew up in this neighborhood. My husband and I have repeatedly expressed interest in buying the vacant lot, for the purpose of developing a 4-6 unit affordable housing project. We have enough equity in our home to finance this, but so far the city has been unsupportive. Essentially, they’ve said, ‘We don’t think this is the property for you.’ We’ve been told the property is worth about $140,000. The city sells a lot of lots, sometimes with homes on them, for $1.
“We’d like to see them show more interest in working with BIPOC residents who are interested in being their own property developers.”

What are community voices saying?
The next stop was the former Sears site, which consists of the vacant but still-standing 187,000-square-foot store and a 17-acre parking lot. This site was once part of the “Cornmeal Valley” section of the historically Black Rondo Neighborhood.
Hundreds of single family homes that stood there were taken by the state of Minnesota Department of Transportation under the right of eminent domain in the early 1960s and demolished. Sears filed for Chapter 11 bankruptcy and closed the store in 2018.
The property is just west of the Capitol grounds, and has long been considered one of the city’s prime redevelopment properties. It has been bought by a New York development company called Seritage.
FNA and other housing advocacy organizations are working to get Seritage to listen to community voices in the early stages of planning and development. There is the potential for thousands of rental units to be built here, as well as mixed use retail, office space, and recreation opportunities. FNA wants to make sure that whatever is built will be of value to people already living in the neighborhood.
Stops four and five were properties in Frogtown awaiting redevelopment.
The tour ended at 652 Sherburne Avenue, where an eight-plex with historic value currently stands. The building is structurally sound, but it faced demolition several years ago. FNA organized the tenants to press for much-needed repairs from the landlord, and was recently awarded tentative developer status for the property. More improvements are coming soon.
To connect with FNA and learn more about their neighborhood justice work, go to www.frogtownmn.org.

SPPS students show gains in all subjects on MCA test