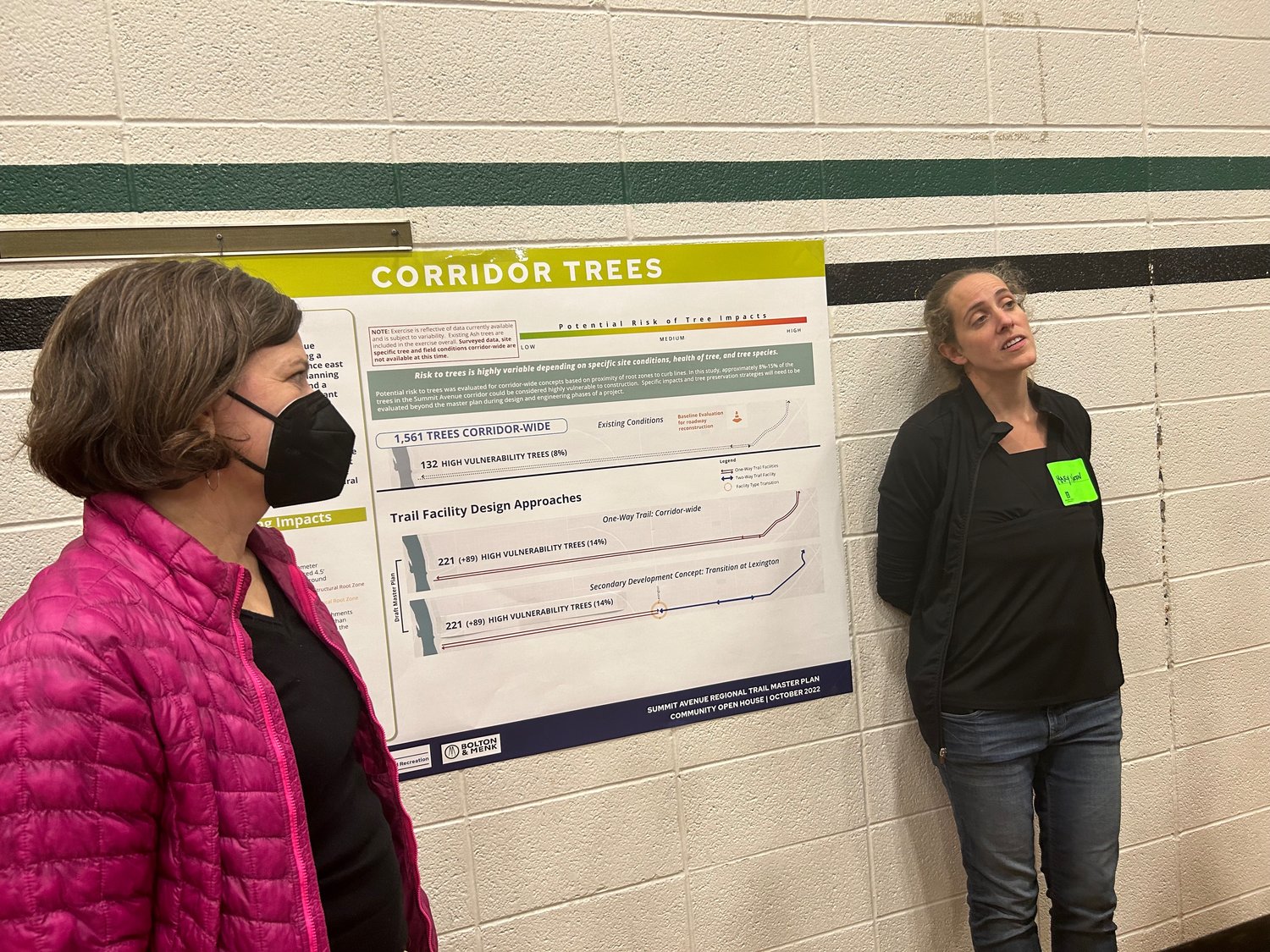 City Landscape Architect Mary Norton (at right) explains the city’s findings about tree loss that would happen when constructing the bike lanes. The city is working with the Forestry Department of St. Paul and will continue throughout the process. (Photo by Chloe Peter) 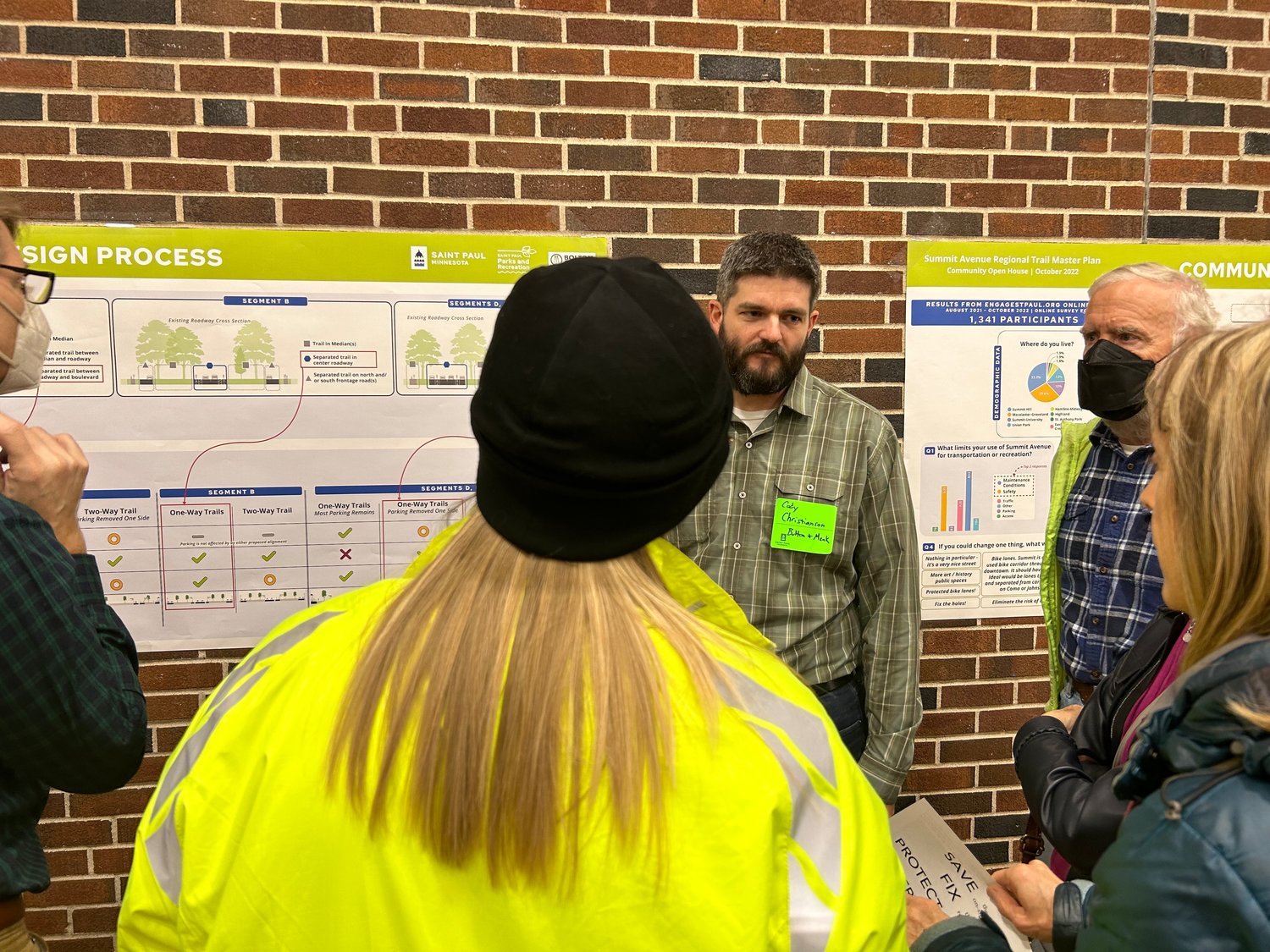 Cody Christianson answers attendees' questions about the design process of the various bike lanes. They aim to enhance safety but also keep parking, pedestrians, and cars in mind. (Photo by Chloe Peter) 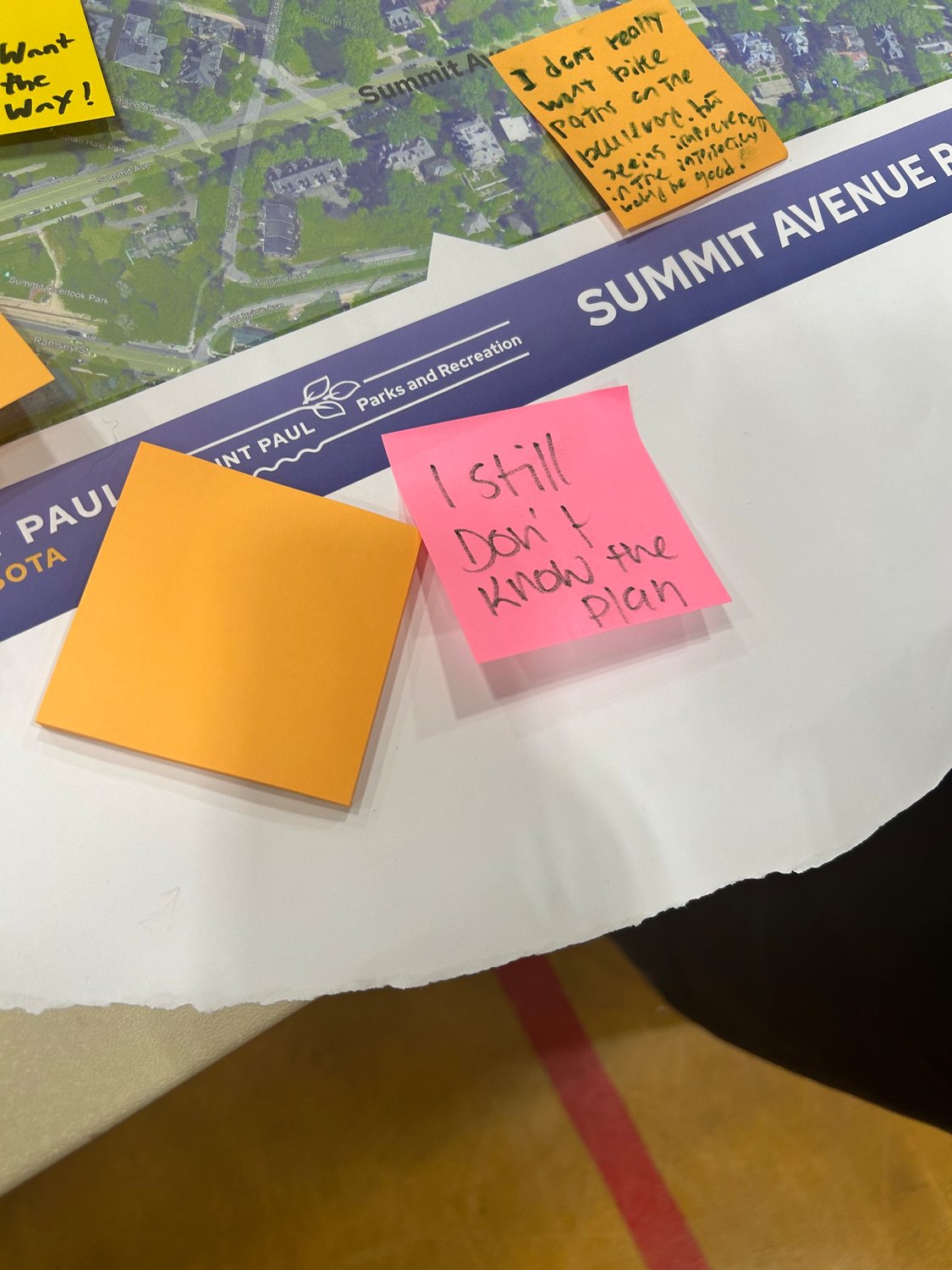 Community members could leave comments on a map pf the Summit Avenue Regional Trial map, and are concerned about tree loss, historical preservation, and the safety of the bike lanes. (Photo by Chloe Peter)
Previous Next
Posted Wednesday, November 9, 2022 11:56 am
150 TREES CHOPPED DOWN ALONG CLEVELAND

Earlier this year, more than 150 large trees lining Cleveland Avenue were cut down. County officials insisted that the trees must go, in order to widen the road to add both in-street bike lanes and an off-street multi-use path along Cleveland. Pat Thompson, the chair of the St Anthony Park Community Council’s transportation committee and others representing the neighborhood firmly disputed the need to cut down the trees.

A statement from community members opposed to the tree loss cited data from the Metropolitan Council (the source of much of the county’s funding for the intended project) which correlates lack of tree canopy with health disparities and heat island effects. From the statement: “The urban heat island affects those at home, but also pedestrians, bicyclers, those waiting for the bus. Removing so many trees along this important corridor will significantly increase health risks and the quality of life of people who use and live by this street. The county should balance the need for a street rebuild with the increasing recognition of the value of trees for climate and human health, even if it means delaying the project one year.”

Ironically, some of the largest trees removed were on the verdant mall of the University of Minnesota’s College of Agriculture.

The city’s proposal to remove mature trees and parking along Summit Avenue to create a bike trail is creating controversy throughout the Twin Cities. More than 150 people attended an open house at Hidden River Middle School (1700 Summit Ave.) on Thursday, Oct. 27, 2022, to discuss the Summit Avenue Regional Trail master plan. Some attendees stressed making sure the historical aspects of Summit Avenue are protected, while others are concerned over tree loss, landscaping and the 150 driveways along the route. Other attendees are looking forward to a better bike route.
Comments were written on brightly covered post-it notes and stuck to a map of the master plan. They included concerns such as “I still don’t know what the plan is,” and “Why is preference being given to bikers?” Others expressed support: “Big fan of off-street lanes, I don’t want to be in the way!” and “Exciting! We use Summit for E/W connection – this will be great!”
Summit Avenue provides a link between the river and downtown St. Paul. The city has proposed different options for a new bike lane along with restructuring of the road. One option is a two-way separated trail going one direction that would replace the parking lane. Another is a one-way separated trail on both sides of the road.
“Summit Avenue has been an integral part of the St. Paul community since the mid 1800s and remains one of the most iconic and historic areas of the city,” according to the city’s draft master plan. “Over time, the purpose and use of this corridor has evolved with the needs of the community. This master plan aims to anticipate future needs of the corridor and plan implementation strategies that will maintain and preserve the iconic elements of Summit Avenue.”
The open house was a part of the master plan schedule phase three, slated from summer of 2022 to winter of 2023, which includes refining the plan and gaining approval. As of now, the plan for the Summit Avenue Regional trail is only 60 percent of the way done. The approval process will require the Heritage Preservation Commission (HPC), Saint Paul Transportation Commission, Saint Paul Parks Commission, Saint Paul City Council, and Metropolitan Council Parks and Open Space Commission to sign off on the project.

Input from bikers
Bikers have expressed concerns about safety with on-road bike lanes, and some believe that this new design will help with that.
“I am excited for better bike lanes and bike infrastructure in Summit Avenue,” said Susan Socehacki. “It would be a great improvement and make things a lot safer for folks who don’t want to be car owners.”
Another attendee, Kathy Ebiertz, said, “I’d love to see it safer, and the proposal is good for that. I use the bike lane a lot.”

Historical concerns
The Summit Avenue Regional Trail corridor runs through several historic districts and is next to many historical buildings and sites. The trail corridor provides access to other historical areas, particularly those within downtown St. Paul and near the Mississippi River. The historic districts and sites within the corridor have different requirements and recommendations. In general, some of the significant historical elements along Summit Avenue include the historic architecture, general pervious and impervious rhythm, and other character defining features, unique to individual segments of the corridor.
Cultural Resources Project Manager and Architectural Historian Renee Barnes of Bolton and Menk, the civil engineering company helping the city with this project, was at the open house to answer questions about historical preservation of the Summit Avenue project.
“The overall goal is that the city will be able to recreate Summit Avenue with no negative impacts to the history,” Barnes said.
However, some attendees were still worried that the master plan lacked the steps in place for protecting Summit Avenue’s history.
“Summit Avenue is a historic street, and I think it should be preserved as is,” said Carolyn McClay. “I think this is liberal progressives trying to tell us what’s right. I feel like they are very patronizing, and I don’t need them to tell me if I should ride my bike or drive my car.”
A citizen group, “Save Our Streets,” argues that the existing bike lane along Summit Avenue is adequate, although it should be repainted, and buffers added where possible without reducing parking or green space.
“We request that the historical characteristics be preserved, the features which make Summit Avenue a distinct and nationally known street,” said Bonnie Alton, a member of “Save Our Streets.”

Concerns over tree loss
An inventory of trees and greenspace along Summit Avenue was completed by the city as part of the planning process for this master plan. Different aspects of the parkway canopy were mapped including all tree locations, structural and critical root zones, landmark trees, and ash trees within the corridor. The structural and critical root zones are a starting point when considering a trail location and the potential impact on mature trees.
City landscape architect Mary Norton explained the process the city has used to preserve trees. Project designers worked with the city’s forestry department to pinpoint specific tree preservation strategies, which will continue to be evaluated during the design and engineering phases of the project, said Norton. The city estimates that there are 221 trees that will be vulnerable to construction. However, “Save Our Streets” argues that more than 300 trees are at risk.
One member mentioned not supporting the project until tree protections were put into place by the city. However, Mary Norton pointed out that the master plan has not given out the dimensions of the boulevard as these numbers have not yet been set in stone, and that this is not the first time this citizen group has given out possible misleading information about the regional trail.
A draft of the master plan is available on the city’s website, and public comments will be open through the end of November. Learn more about the Summit Avenue Regional Trail at https://www.stpaul.gov/departments/parks-and-recreation/design-construction/current-projects/summit-avenue-regional-trail.