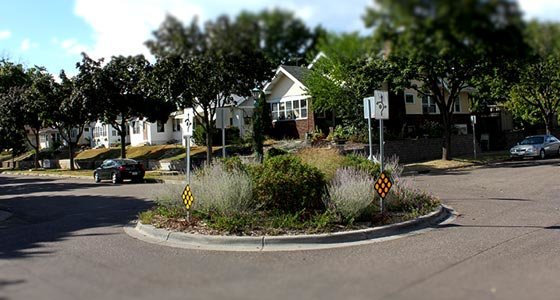 Traffic circles like this one are designed to calm traffic and make the neighborhood more pedestrian friendly. Last week the City Council voted to support Charles Avenue bike improvements to enhance safety for bicyclists and pedestrians. (Photo by Stefanie Berres)

Bicycle and pedestrian safety improvements for Charles Avenue between Park and Aldine streets will calm traffic and make the area safer. Or will they hurt businesses, make it less safe for cyclists and simply push traffic to other neighborhood streets? Those opposing views were heard before the St. Paul City Council voted 5-2 to support the 3-½ mile project.

In moving support for the project, Ward Four Council Member Russ Stark said his office and city staff worked hard to find a compromise. He said one issue that emerged is that “as neighbors, we need to reach out earlier and more often to businesses.”

Stark said he believes the project will have benefits and will not have negative impacts businesses fear. More than 100 people, wearing printed badges to show support or opposition jammed the Council chambers for the public hearing. Supporters included Charles Avenue residents from Hamline-Midway and Frogtown neighborhoods and bicyclists who worked for many months to get the project approved. They held block parties and events that drew more than 900 people as they sought ideas.

But opponents included other residents of Charles and surrounding streets who said the project isn’t needed or will affected neighborhood streets. A large group, including Midway Chamber of Commerce, came out to support Snelling Avenue businesses that fear losing customer access when the Charles-Snelling crossing is blocked with a median. The median will be built to allow bikes and pedestrians to safely wait for traffic to clear, and for emergency vehicles to get through. But Holcomb-Henry-Boom-Purcell Funeral Home, Ellis Drum Shop and Holiday Station are among those fearing they will lose business as customers cannot made left turns from southbound Snelling.

The median changes will be among the first made. The project is to be completed by the end of 2015. By then nine traffic circles and other changes should be made, as funding becomes available. The project also calls for more signage, street markings and corner bumpouts. One goal is to have Charles become a more “green” street.

As what is described as a compromise, the City Council did agree to reopen Snelling and Sherburne. Business representatives questioned how that would help. Stark also urged city staff to work with the businesses on either temporary or permanent directional signage.

Since 2010 Charles has been identified as a potential bike-walk route paralleling Central Corridor. It would connect to other routes via Aldine, Pascal, Park and eventually Griggs Street.

Attorney Ferdinand Peters represents Holcomb-Henry-Boom-Purcell. While his clients support the bicycle improvements, they are very opposed to the median and the potential impacts on their business. So is Ellis Drum Shop, said owner Tim Ellis.

“This would absolutely hurt, hurt my business,” Ellis said. “I can’t sell a drum set to someone on a bicycle.”

Some speakers asked why Thomas or Minnehaha avenues aren’t used, as those have signalized crossings at Snelling. “Why not look at Thomas?” said Charles resident John Smetana. “Isn’t that the best place for people to cross the street?”

Hamline-Midway resident and bicyclist advocate Benita Warns said it’s wrong to block off intersections and hurt businesses. She said traffic circles are a bad idea, noting she and her husband were almost struck while biking when a motorist didn’t negotiate a traffic circle correctly.

“We don’t like the fact that business is being further impeded,” said Paul McGinley of Midway Chamber of Commerce. Businesses have already been hurt by light rail construction. He also said that using Sherburne as an alternative puts pedestrians at risk there.

But supporters said they don’t believe the changes will have the negative impacts feared and instead will have many benefits for the neighborhood. Hamline-Midway resident Lars Christiansen said the project will not only make the street calmer, it also helps meet goals including place-making and community building. He said an “unprecedented” number of people weighed in in support of the project.

“The intent is to make the street safer for all users,” said Jessica Treat, Hamline-Midway resident and executive director of St. Paul Smart Trips.

Several speakers in support of the project said that diverting bikes to Thomas or other streets is contrary to the project’s purpose. “Even going a block or two out of your way is inefficient,” said Hamline Midway resident Nancy Fischer.

“The Snelling median is one of the most integral pieces to making this work,” said Hamline-Midway resident Matthew Lang.

“I think there’s actually huge pent-up demand for people who want to do more biking and walking, but right now, we don’t know what that is, because they don’t find it safe,” said council member Stark, who lives in the 1500 block of Charles Avenue.

Council members Dave Thune and Dan Bostrom voted against the project. Thune is worried about use of an unsignalized crossing at Snelling, saying, “I think somebody is going to get splattered.”