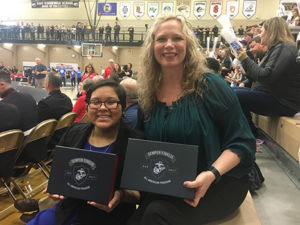 Rosmery Moran-Osorio and Spanish teacher Ms. Angela Butler attended a ceremony to honor Rosmery’s recognition as a Semper Fidelis All-American. They will participate in the Marines’ Battles Won program this July in Washington D.C. (Photo submitted)[/caption]

Rosmery Moran-Osorio, a Como Park junior and leader within the Marine Corps JROTC program, was selected as a Semper Fidelis All-American. The award comes with an all-expenses paid trip to Washington D.C. in July for participation in the Marines’ Battles Won Academy. All cadets may choose one mentor to participate in the program with them, and Rosemery has selected her Spanish teacher Ms. Angela Butler.

The Semper Fidelis All-American recognition is rare and highly coveted. It honors high school students who have faced serious challenges and overcome obstacles to excel academically and be leaders in their communities. Rosmery is a first-generation American student and will be the first in her family to graduate from high school. She has achieved a 3.5 grade point average through her junior year at Como.

Her essay in the competitive application process revealed her perseverance and her initiative to succeed in her mother’s new country. “Leaving Guatemala, being born in the U.S. and making a fresh start in the United States has been a God-send for my family,” said Rosmery.

While in Washington, the students and mentors will be active in high intensity daily workouts at Marine Corps Base Quantico, participate in community service events, engage in team-building outings, and tour our nation´s capital. The selected Semper Fidelis All-Americans from across the nation will also have the opportunity to network with an elite circle of speakers from various industries and walks of life who will share their inspiring stories.

As a Semper Fidelis All-American, Rosmery will be eligible for select scholarship opportunities.

27 Como students participated in the annual A Vous la Parole French speaking contest held in Coffman Memorial Union at the University of Minnesota. Sponsored annually by the Minnesota Chapter of the American Association of Teachers of French, with the support of the University of Minnesota Department of French and Italian, the contest recognizes excellence in French speaking skills. This year’s contest drew 1,220 entries among students from across the region.

The following Como students earned blue or red awards at this year’s contest:

The third annual edition of the Cougar Journal, a student-produced arts and literary magazine, was released with an event in the school library on May 29. Senior Cadence Paramore was the editor-in-chief, organizing the publication which features artistic works of writing, poetry, drawing, painting and photography.

The Como Park Fashion Club was formed this school year and held their inaugural “Fashion Glam Event” after school on May 30. Master of Ceremony Roselyn Yeboah and President Ly Xiong worked with other club members and the school community to stage an extravaganza including dance, music, and Como students as runway models on the “red carpet” at the base of the Cougar Forum.

Promotional announcements and flyers hyped a special guest appearance – and the Fashion Club delivered with Miss Hmong Minnesota in attendance as part of the show. Over 100 tickets were sold for the event enjoyed by Como students and staff.