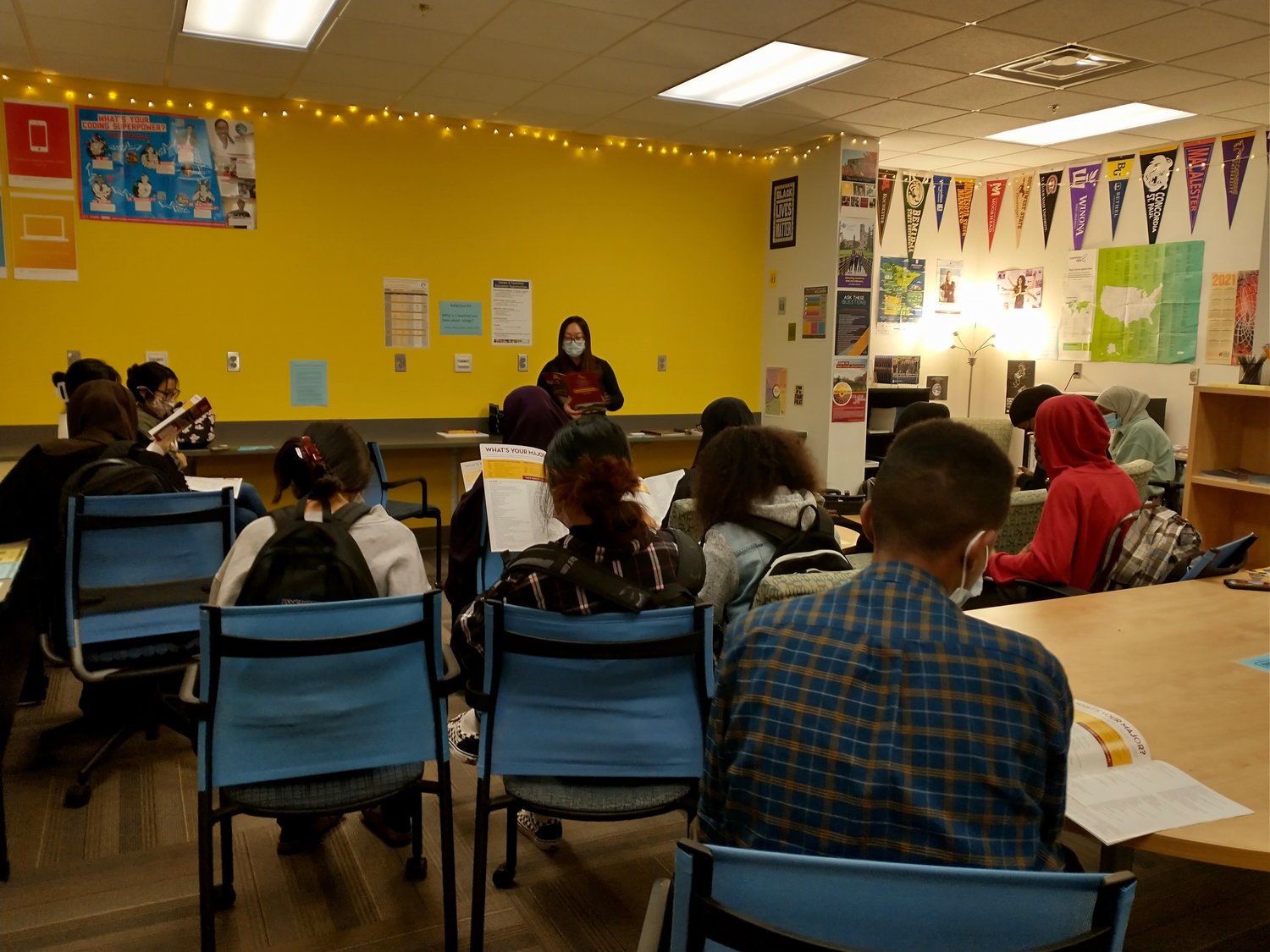 With all Como students back in person this academic year, the Career Pathway Center has been a busy place under the guidance of Ms. Bridgette Kelly.
College representatives have been able to host sessions for interested students, as well as schedule individual visits. Kelly offered a “College Knowledge Night” during parent teacher conferences which had a turnout of 75 students and parents. Attendees were provided an overview of the college application process, resources to navigate it, and even assistance for seniors starting their college applications.
Beyond college planning, the Career Pathway Center is also the information base for certificate programs, internships, work opportunities, and employment training projects.
“Our goal is to support students as they decide what comes next after high school,” Kelly said. “There are so many incredible opportunities to choose from, which can be overwhelming. We want students to know that they are not on their own. That they can come to the Career Pathway Center and get the support they need to turn their goals into achievements.”

JROTC Drill Competition
Marine Corps JROTC cadets hosted the Devil Dog Drill Competition at Como last month. Seven schools, including one from North Dakota and one from South Dakota, came to participate in the annual weekend event that promotes positive energy through physical and mental challenges.
Como took second place overall. Cadet Corporal Ve Ah Ree Shar was selected as the Ironman. The Knowledge Bowl Team took first place led by Cadet Corporal Alex Le. Cadet First Lieutenant Nayblut Kasuh was the Knockout Drill Champion. Cadet Major Aliser Paw, Como’s Commanding Officer, won first place for the Uniform Inspection Team.
“The teamwork and morale of all the cadets was critical to our success,” said Sgt. Major James Kirkland. “Their example of good sportsmanship to more than 300 visitors to Como during the weekend was a high point and will leave a lasting impression.”

Theater Club
Creative Como students who casually collaborated on skits this fall ended up putting on a production in the school’s forum on Nov. 18.
After starting with weekly meetings, theater games and acting drills, the club members were inspired to write original skits. An enthusiastic and supportive audience was treated to four short one act plays.
The fun and entertaining storylines were focused on a goth principal and their interpreter, a unique take on a Freddy Fazbear Pizzeria, an unruly customer at a drive through, and a scheme where teachers unite to get back at a “naughty” student.

Thanksgiving
Como staff member Donnell Gibson has been running his Gibson Foundation since 2015. Every year at Thanksgiving, Gibson hosts a Thanksgiving meal at Dayton’s Bluff Rec Center for those who may not otherwise have one.
In pandemic times, Gibson has delivered hundreds of cooked meals to East Side families on the holiday. “I was always taught the greatest thing a man can do is feed a person’s soul,” Gibson said.