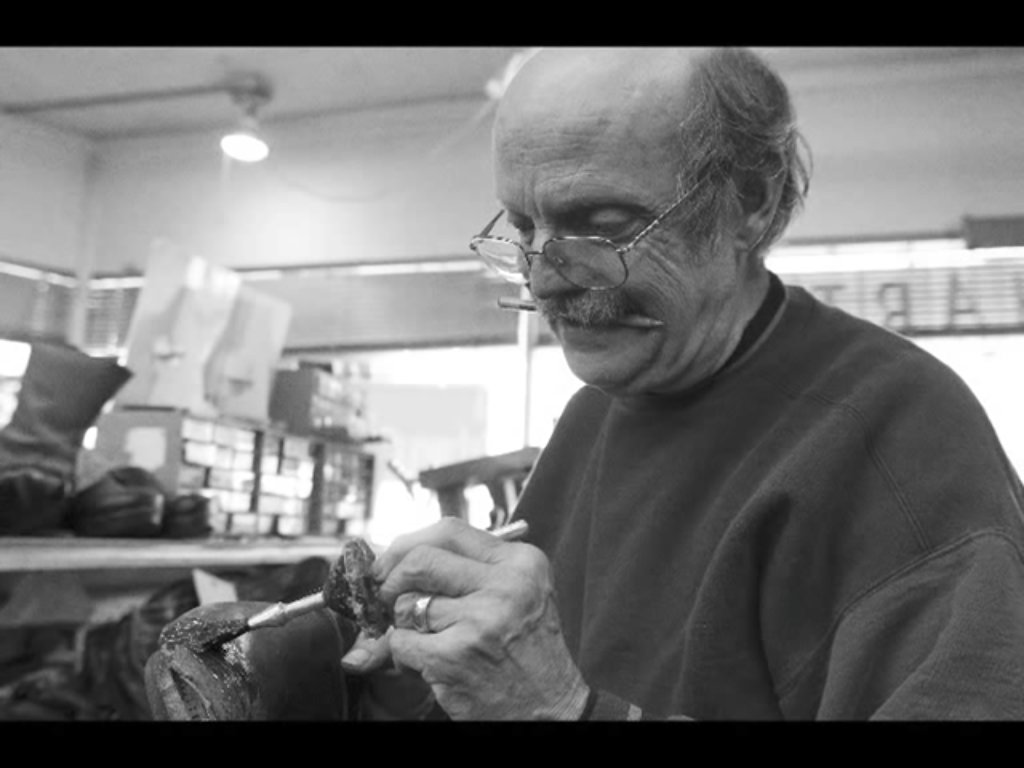 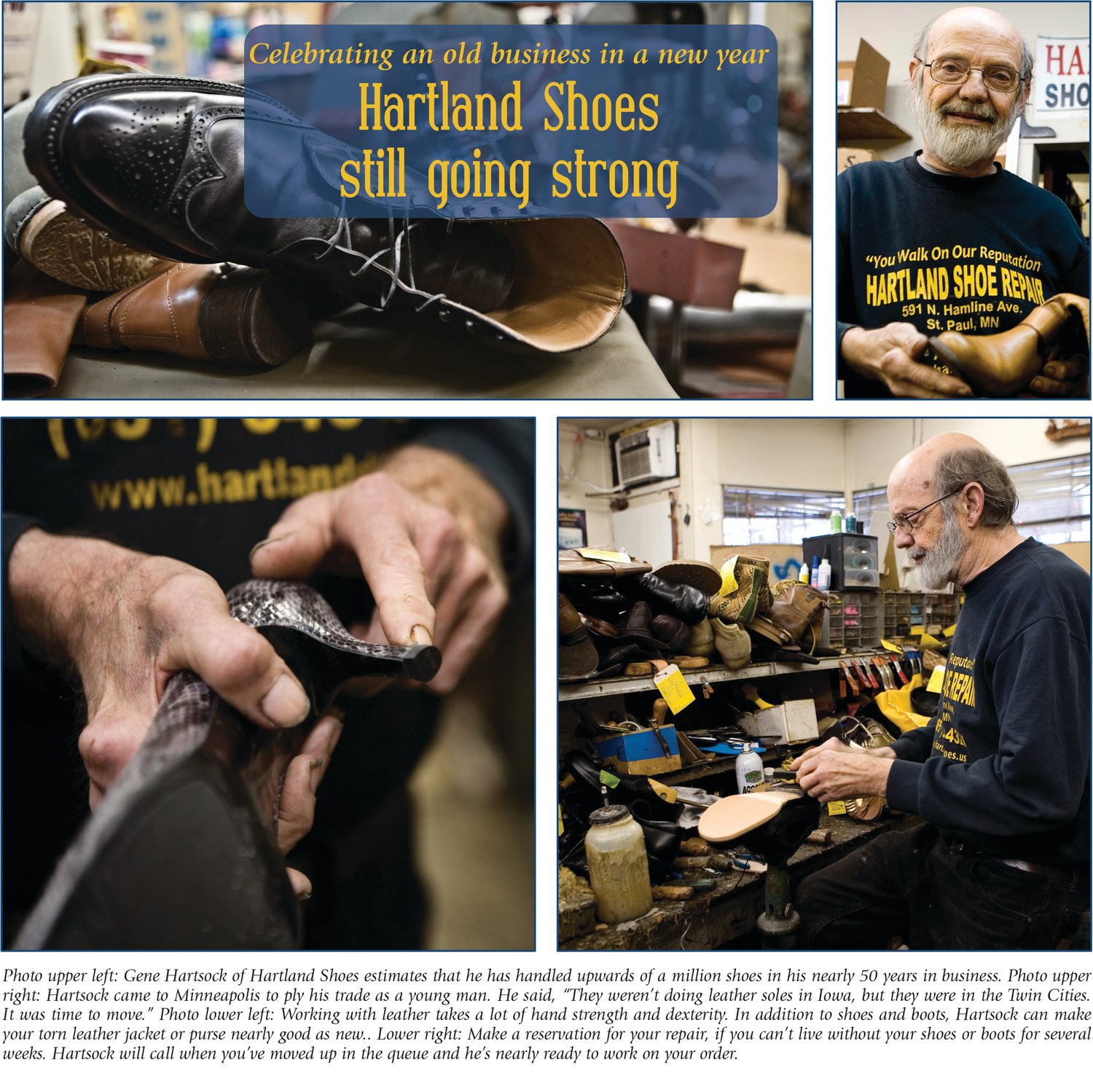 From the January 2016 edition of the Monitor 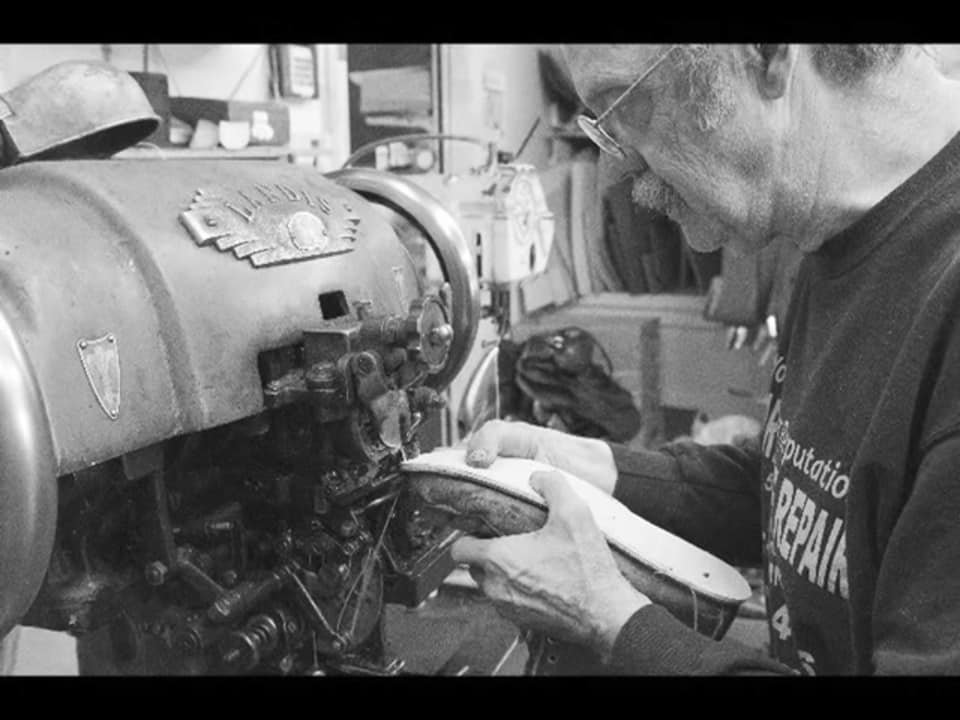 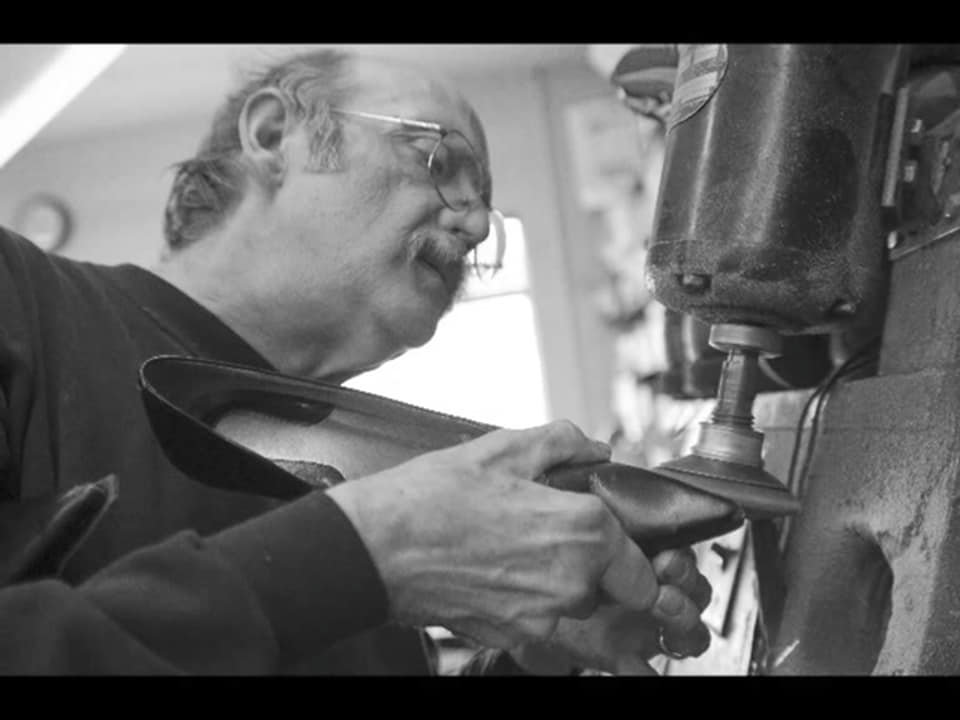 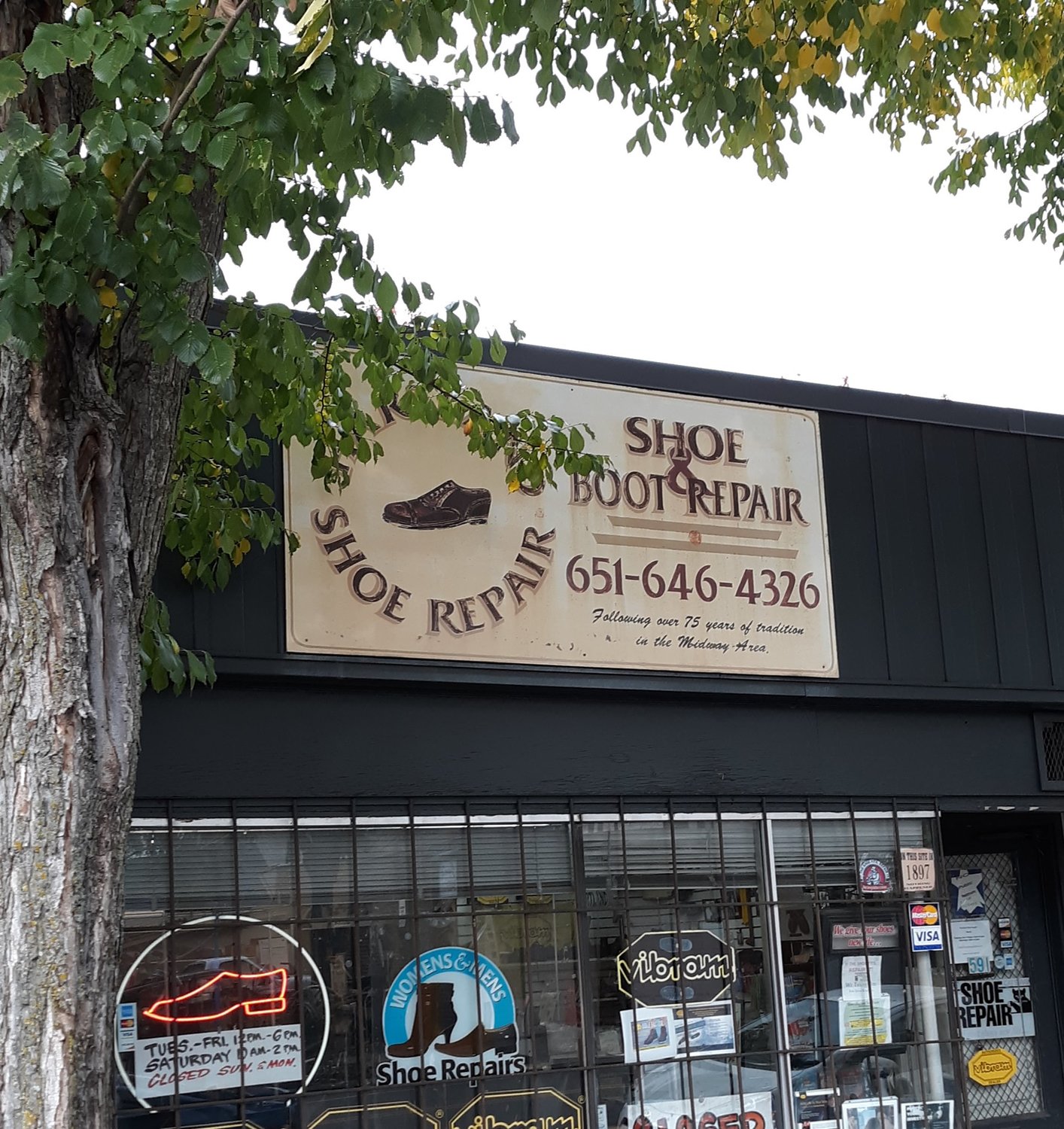 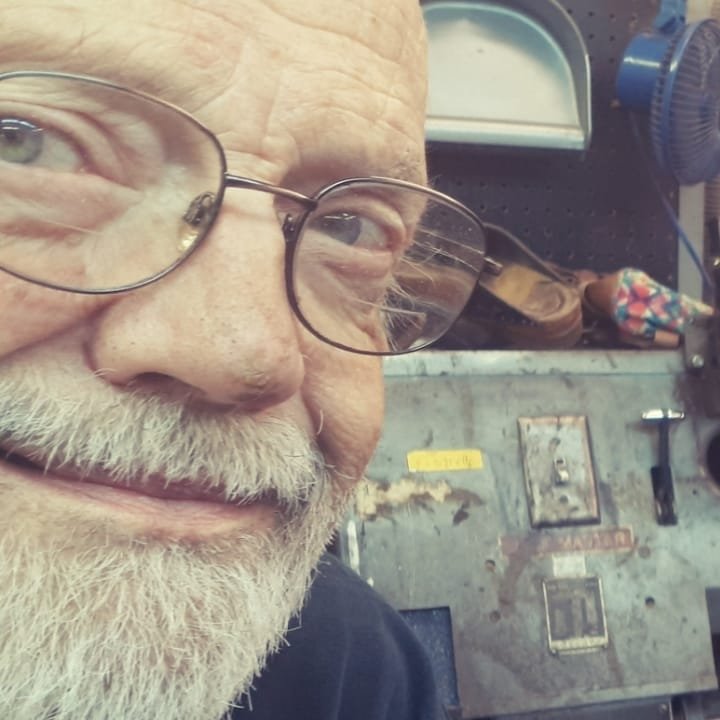 Gene Hartsock is stepping away from a cobbler’s life. Gene’s Hartland Shoe & Boot Repair winds down operations this month, after having a Midway presence since 1989.
“I want to say thank you to the many Midway customers who supported me,” said Hartsock. “I also wish to say that customers think of shoe repairing as part of the reuse, recycle and repair cycle of sustainability. If your footwear can be reconditioned or repaired, people should really look into making that choice.”
He stopped taking in new jobs in March, much to the disappointment of customers who stopped by with shoes in hand. Before everything was packed up, shoelaces, polishes, brushes, insoles, stretchers and other shoe and boot needs lined the walls of the cluttered shop. A clock advertising Vibram soles hung on one wall.
Most of the machines went to Iowa, Hartsock’s home state, the second weekend of April. “In a way this is nostalgic,” he said. “A few years ago I had looked into the possibility of moving back to Iowa City, with my machines. So it’s going without me.” He joked that visiting the equipment is another reason to attend his 50-year reunion at Iowa City West High in 2023.
Gene and wife Anne were longtime live-in caregivers. Their client’s death last year means they are also moving to a new apartment at the same time the shop is closing. “It’s a literal three-ring circus,” he said.
Of retirement, Hartsock said simply, “It’s time.” He’s had kidney transplants, hip replacement surgery and a bout with COVID-19. In February, he slipped on ice and broke pelvic bones. “This past injury was harder to cope with due to a lot of work coming in at about the same time. While past surgeries were planned, the fall was not.”
Customers didn’t seem to understand his recent need to recover from injury and illness, and were not patient. “That hurt,” he said.
Hartsock walked into the shoe repair business as a teenager. His family raised chickens. Fat hens were killed, plucked and dressed for the Big 10 restaurant in Iowa City. One customer loved fresh chicken in his chicken soup so much, he wanted to buy chickens directly. That customer was in the shoe repair business.
It was a good arrangement as the family took shoes to him to be repaired. “Dad wore a size 14, and Mom tended to ‘walk’ her shoes over, so we needed a good repair shop.” Hartsock gave up his paper route to work in the shop.
After high school graduation, Hartsock came to Minneapolis to attend North Central Bible College and work in shoe repair. Downtown department stores had shoe repair shops – Dayton’s, Donaldson’s, Powers and JC Penney. Hartsock thought he had a job but a miscommunication left him with no work, no place to live, $50 in his pocket and car payments.
Hartsock began working for the Lucci family for his first job in the Twin Cities. One brother had a shop at Rosedale; another was in the B-Dale area.
“We weren’t sure in the 1970s if shoe repair shops would still be needed because everyone was wearing tennis shoes,” Hartsock said. But his work took him to Minneapolis and St. Paul Dayton’s, Gokey’s, Schuler Shoes and Apache Plaza. In 1989 he bought a shop at Minnehaha and Hamline avenues, moving to his current location at 591 Hamline Ave. in early 1992.
He reeled off a history of shoe repair changes – challenges of working with vinyl shoes, the change from stitched-on to molded boot soles, the specialty of leather dyeing, and defunct shoe brands. Birkenstocks and Florsheims stood the test of time. Many others have gone away.
Purses were trickier to repair than shoes, Hartsock said. Saddle repair was a sideline.
St. Paul had almost 50 shoe repair shops when Gene’s opened. Downtown St. Paul had seven shops alone. With Gene’s closing, fewer than half a dozen shoe repair shops are in the St. Paul area.
Many stories stand out. At Minneapolis Dayton’s Hartsock once repaired a pair of singer Prince’s high-heeled shoes. At Gokey’s he helped make footwear for then-President Jimmy Carter and Vice President Walter Mondale.
Gene’s was always closed Mondays. One Monday in 1985 he stopped in and the phone rang. “Dare I answer this phone on my day off or not?” He did. It was wardrobe staff from the “Grumpy Old Men” movie. Hartsock wound up putting Cat’s Paw heels on more than 60 cast members’ shoes for traction while walking on ice.
Work for other movies included “Jingle All the Way,” “Feeling Minnesota” and “The Proposal.” Watch reruns of the TV show “Coach?” Hartsock worked on Craig T. Nelson’s shoes, too.
One customer, then-Minnesota Attorney General Skip Humphrey, helped Hartsock get measures in place to help repair shops. Customers would leave items and then not pay and pick up. Regulatory changes made it easier to divest of such items.
Shoes from around the world came in for repairs. Birkenstocks were a specialty, as were orthopedic lifts and shoes for Gillette Children’s Specialty Hospital.
Closing the shop is bittersweet, although Hartsock is looking forward to more time with his wife, and his sons and their families. Three granddaughters will be glad to have more of his time.
“I’ll miss my customers, but it’s time,” he said.

A look at what’s happening in Hamline-Midway