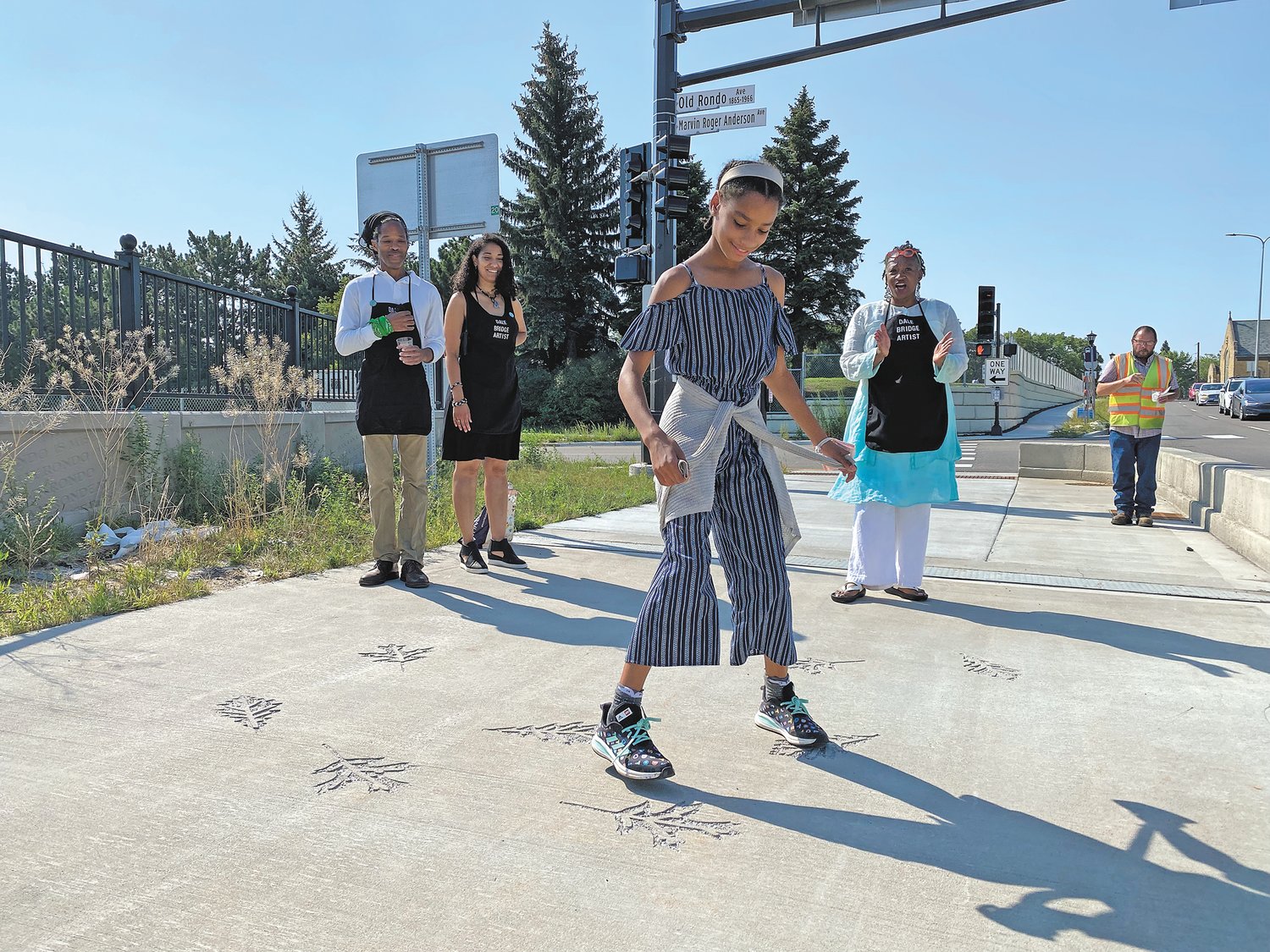 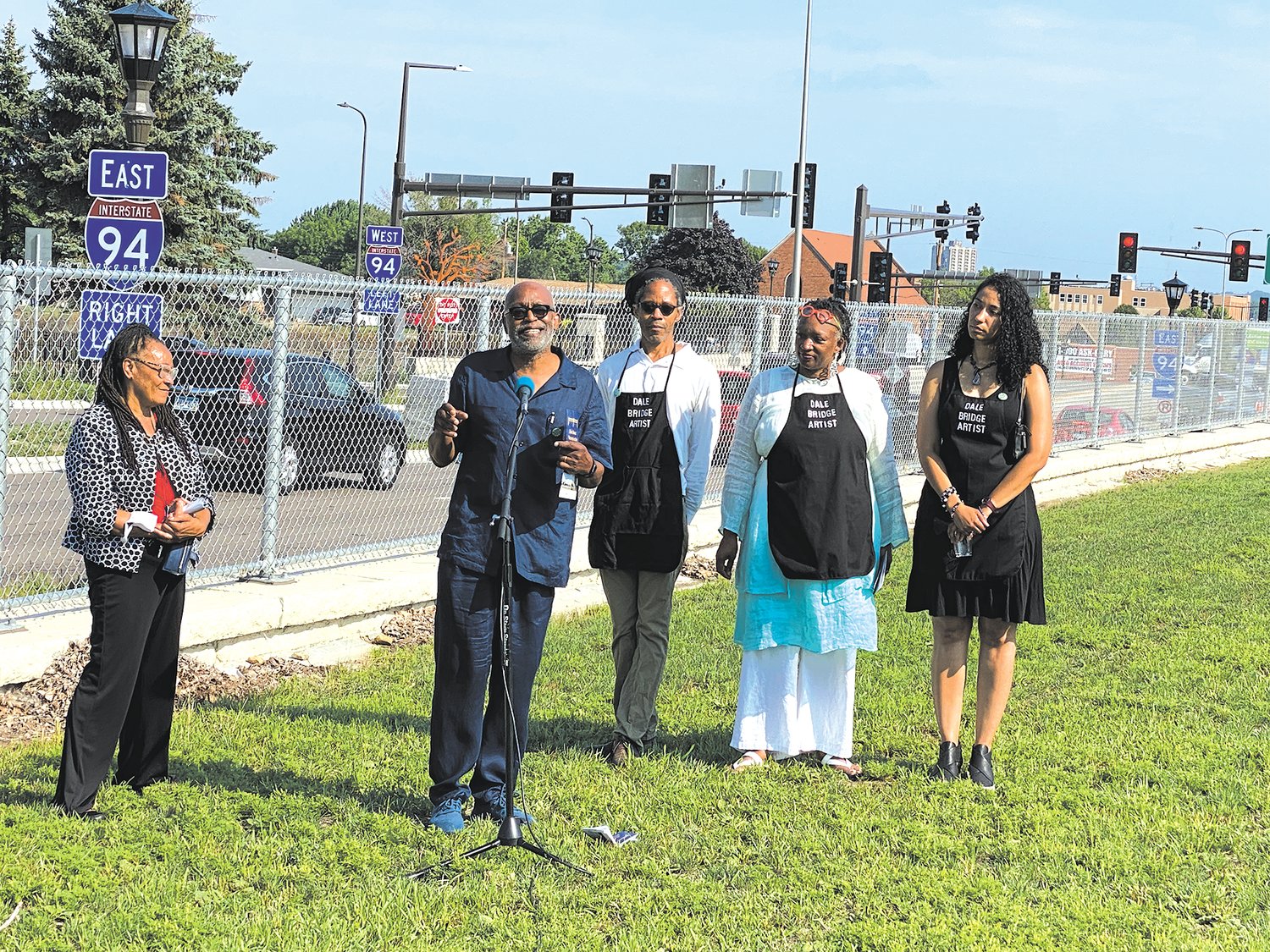 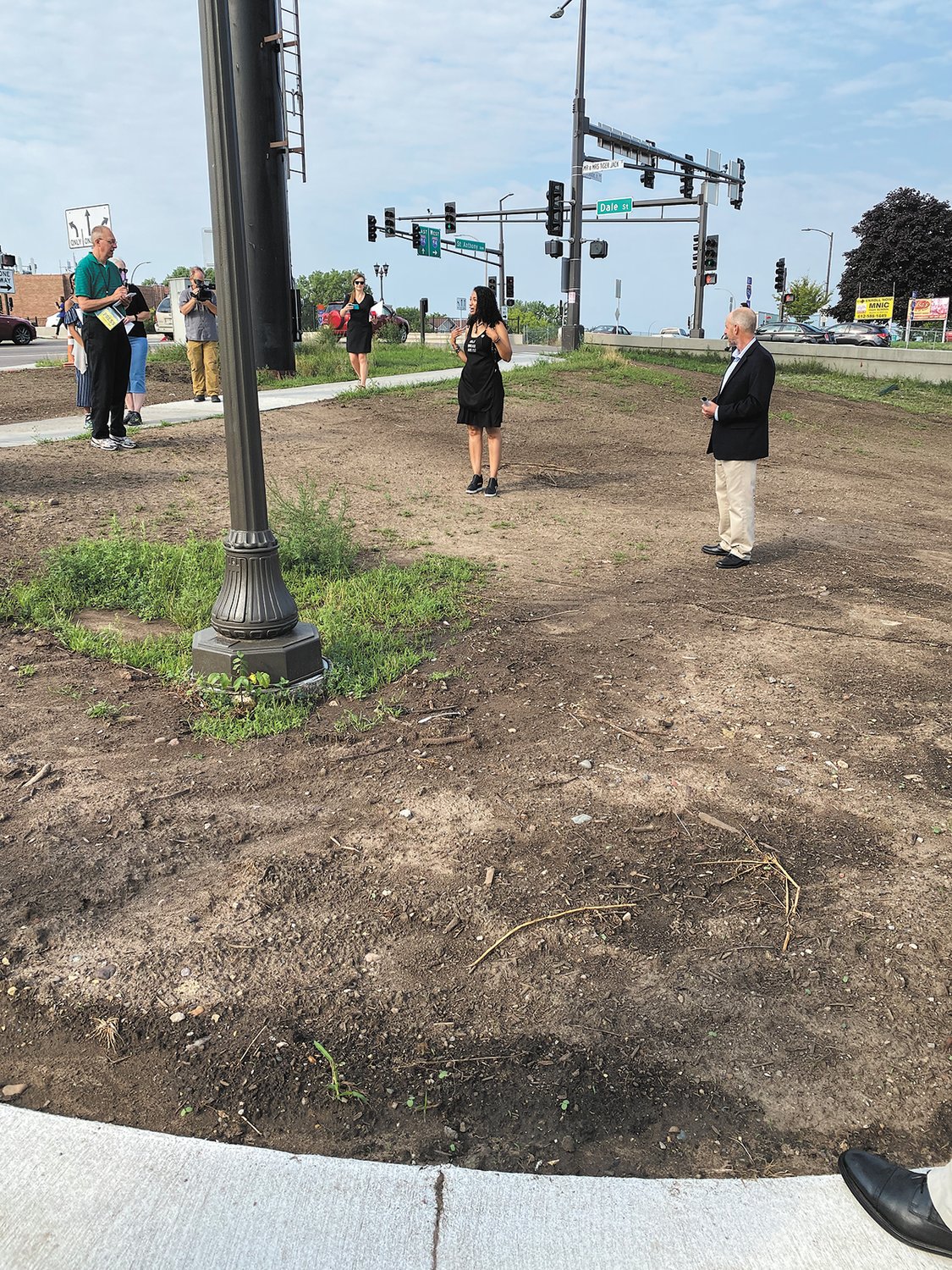 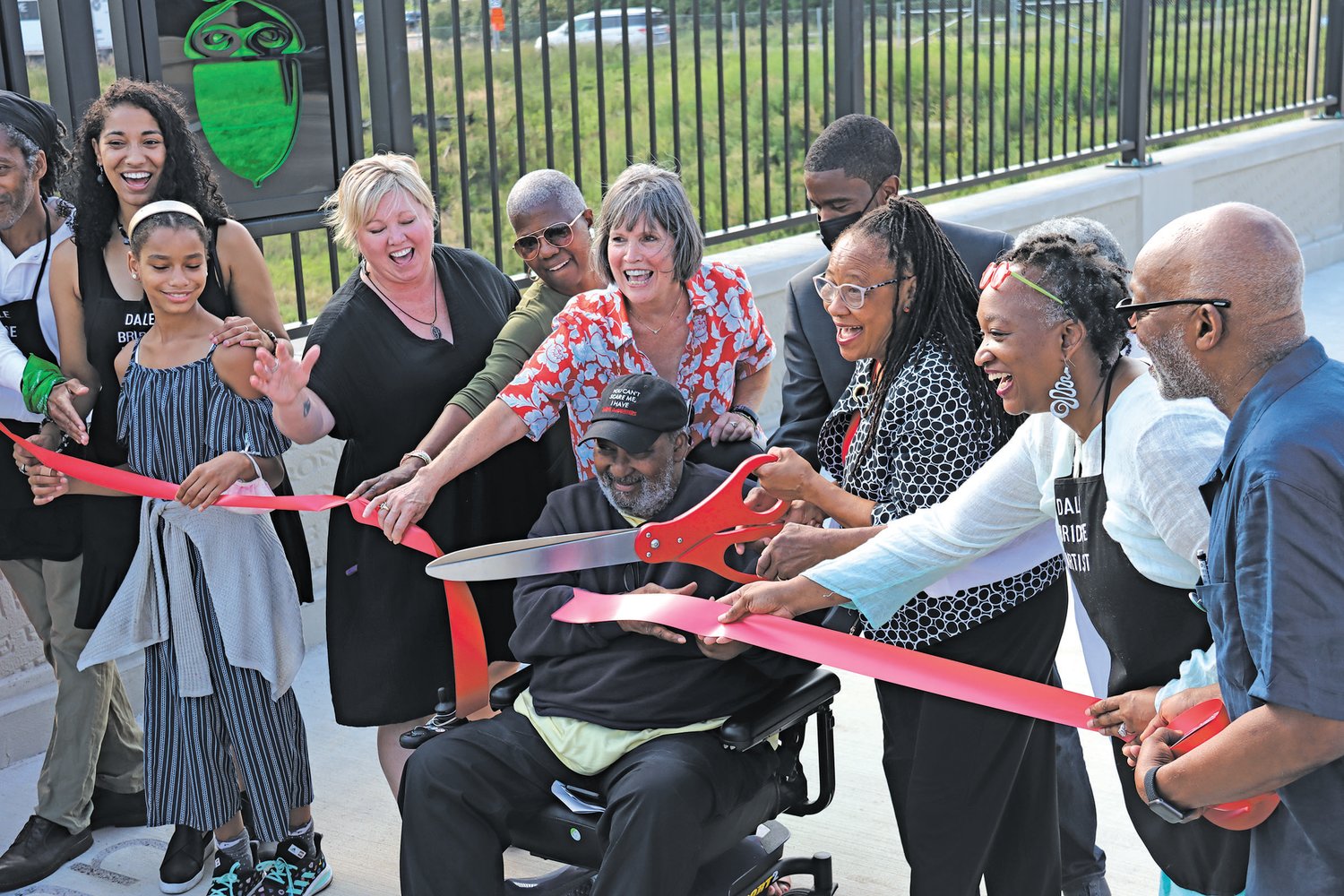 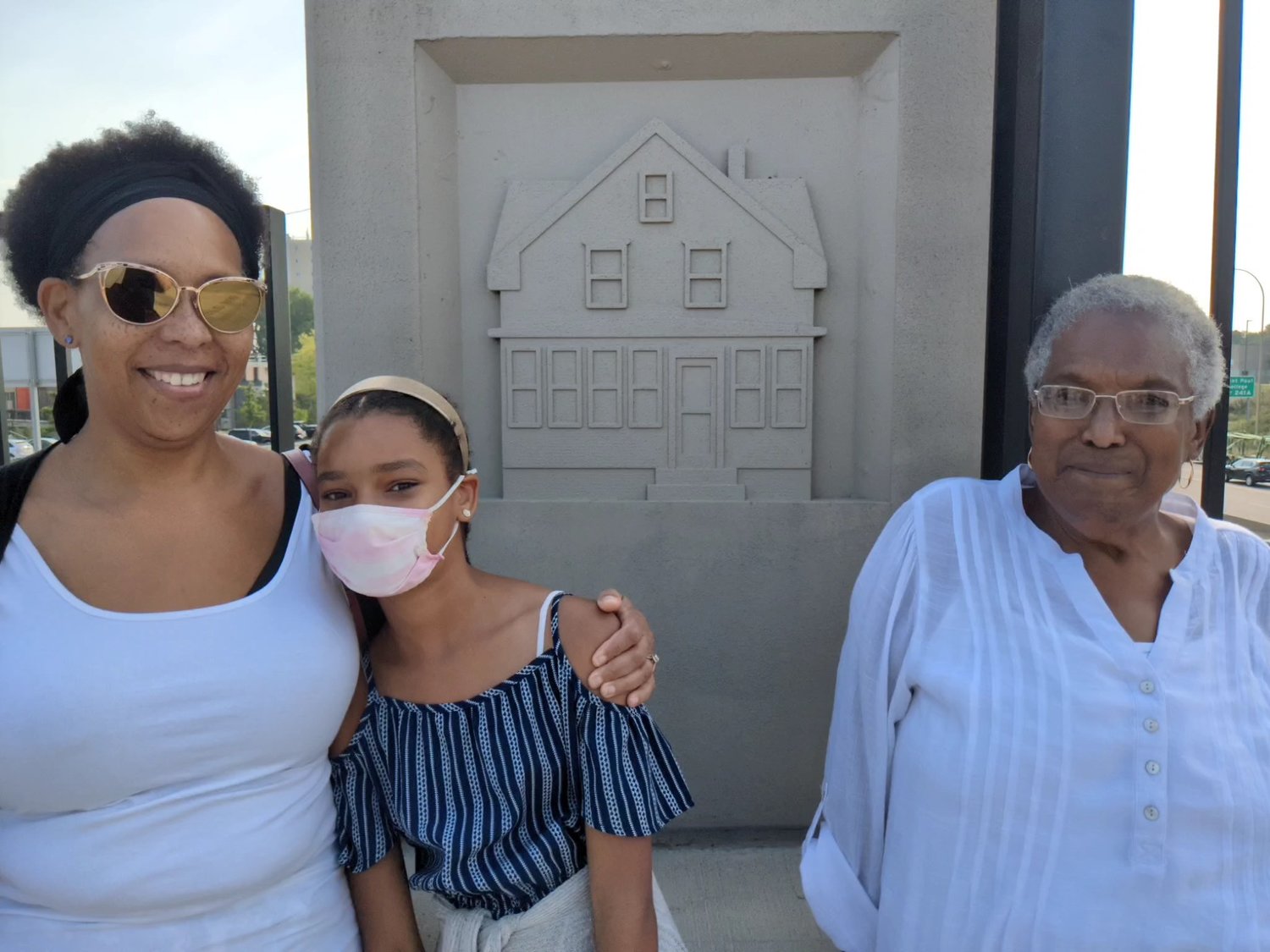 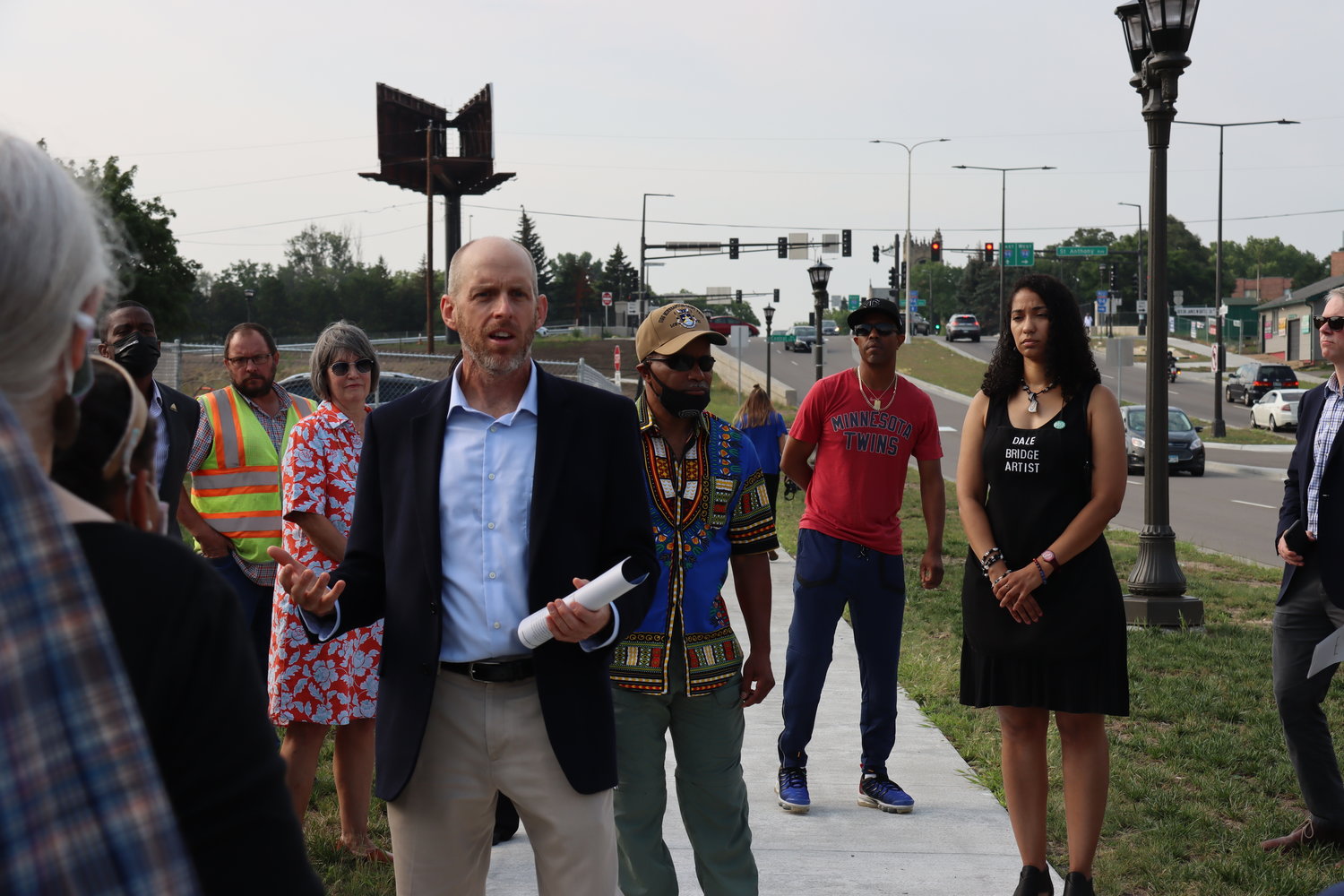 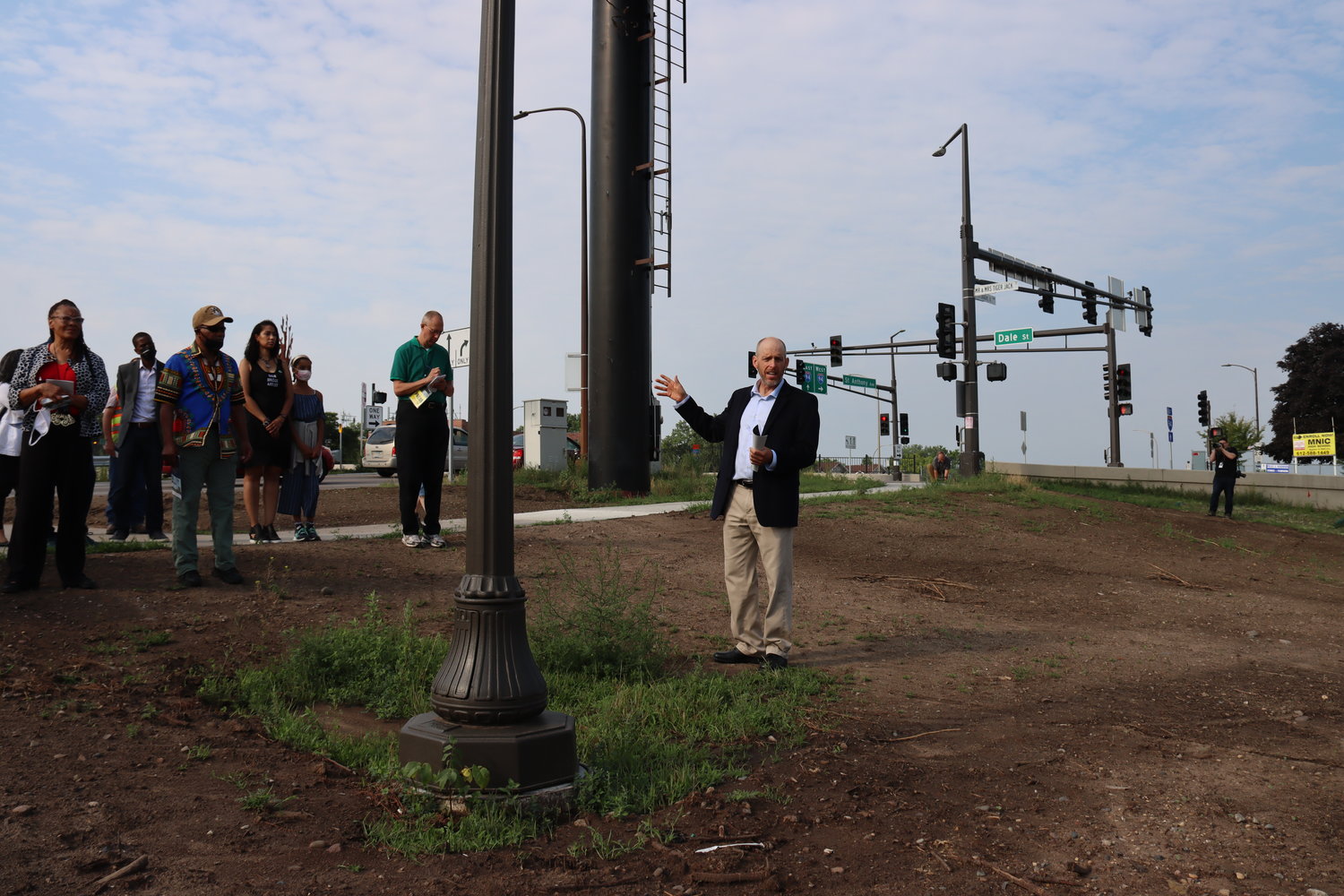 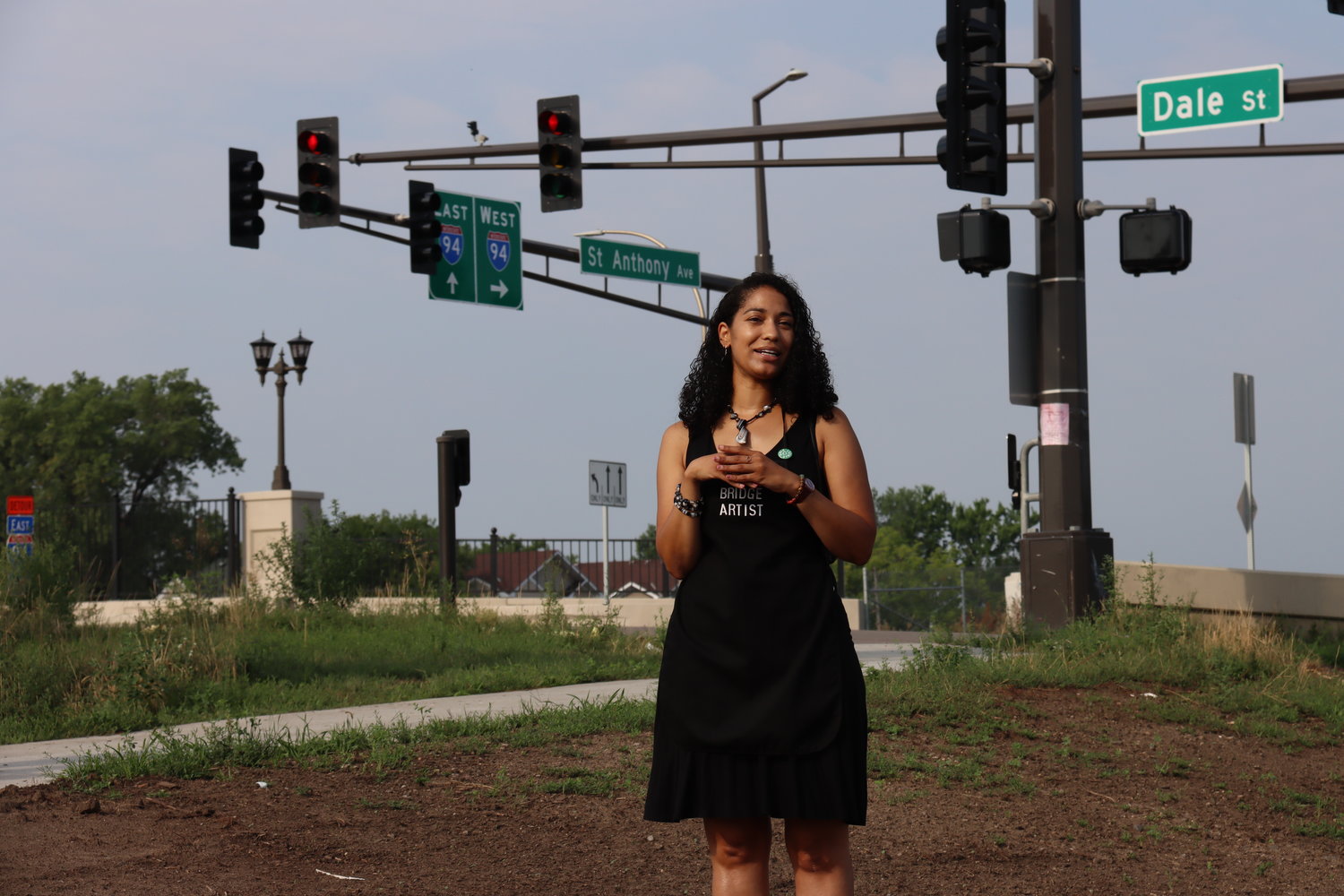 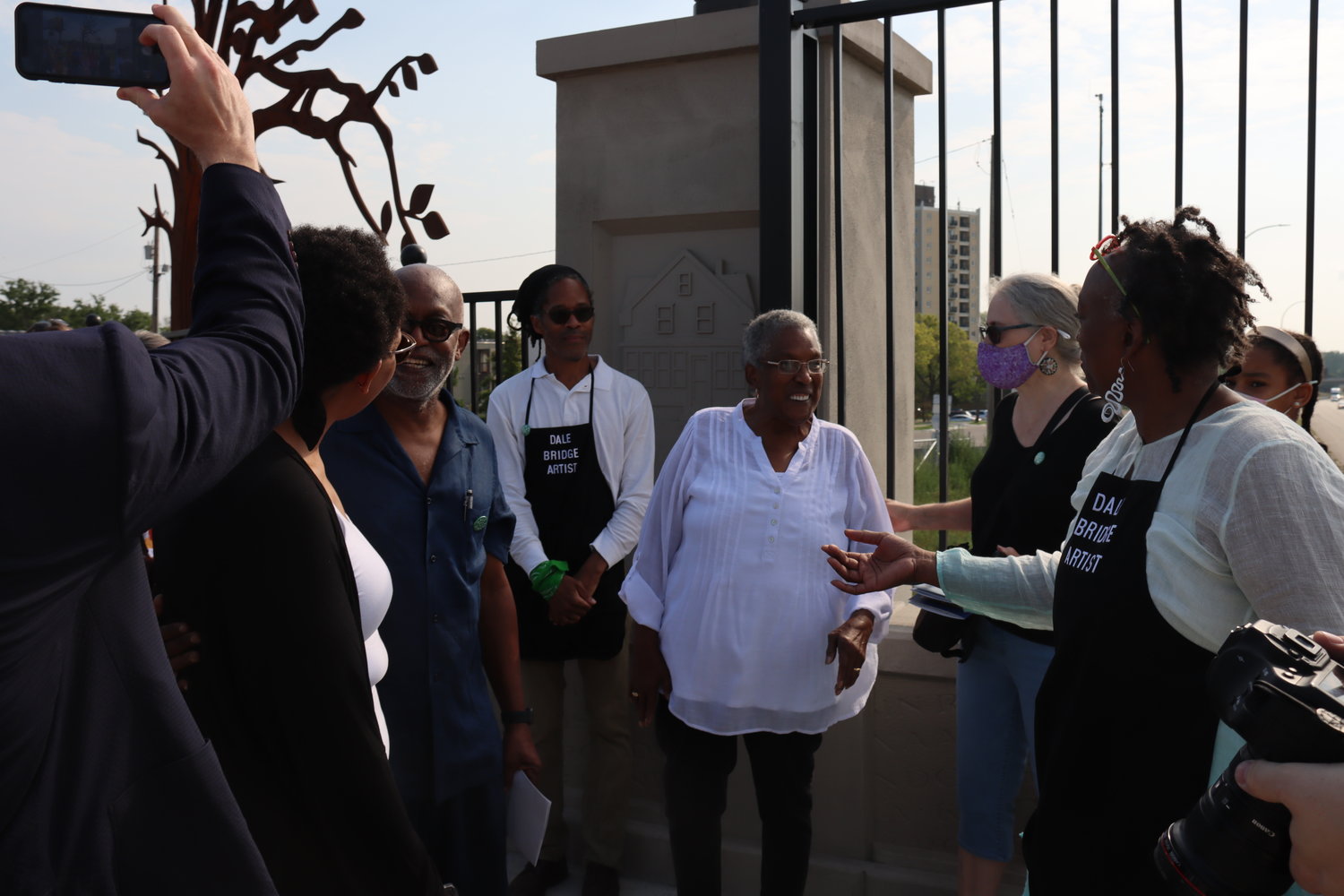 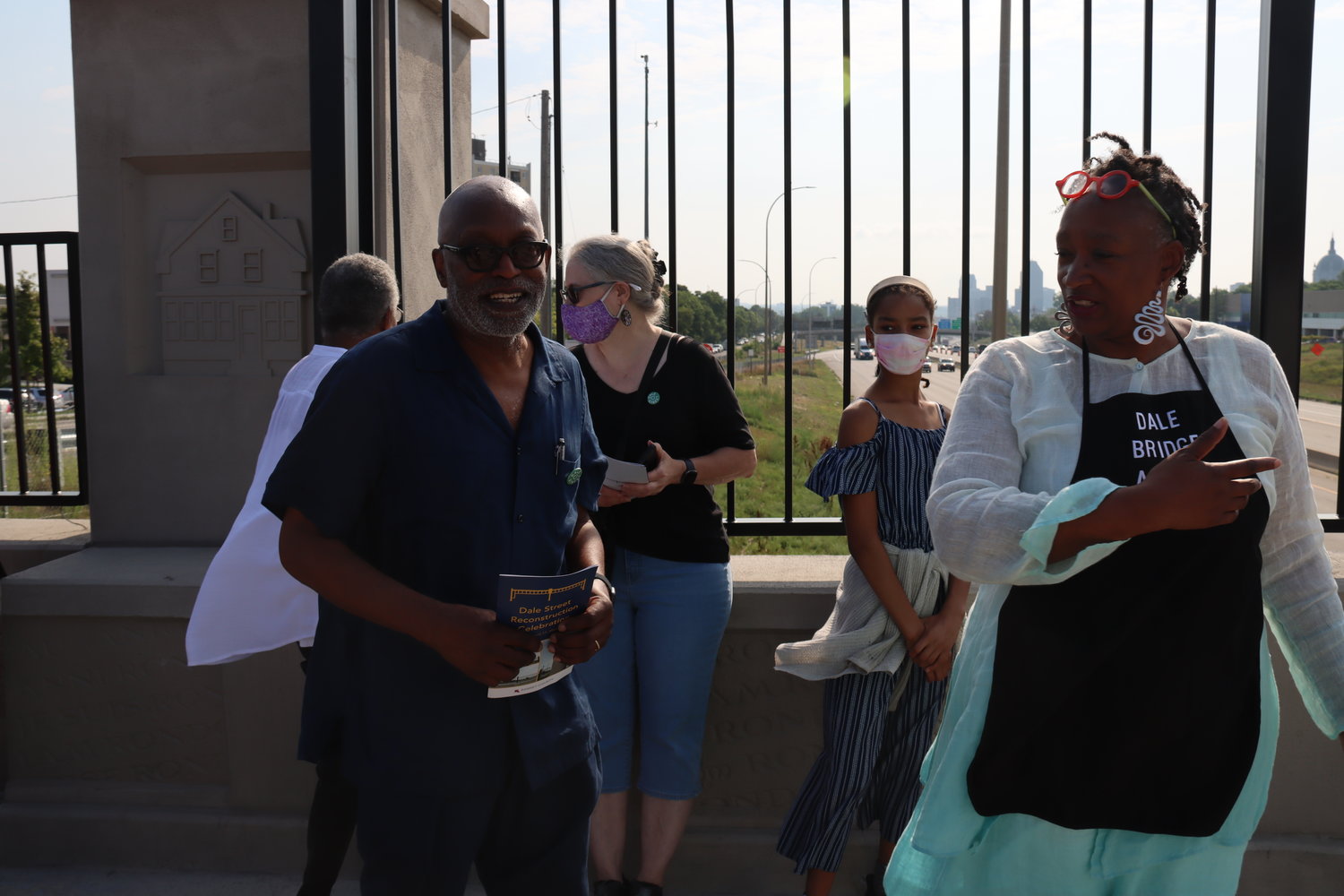 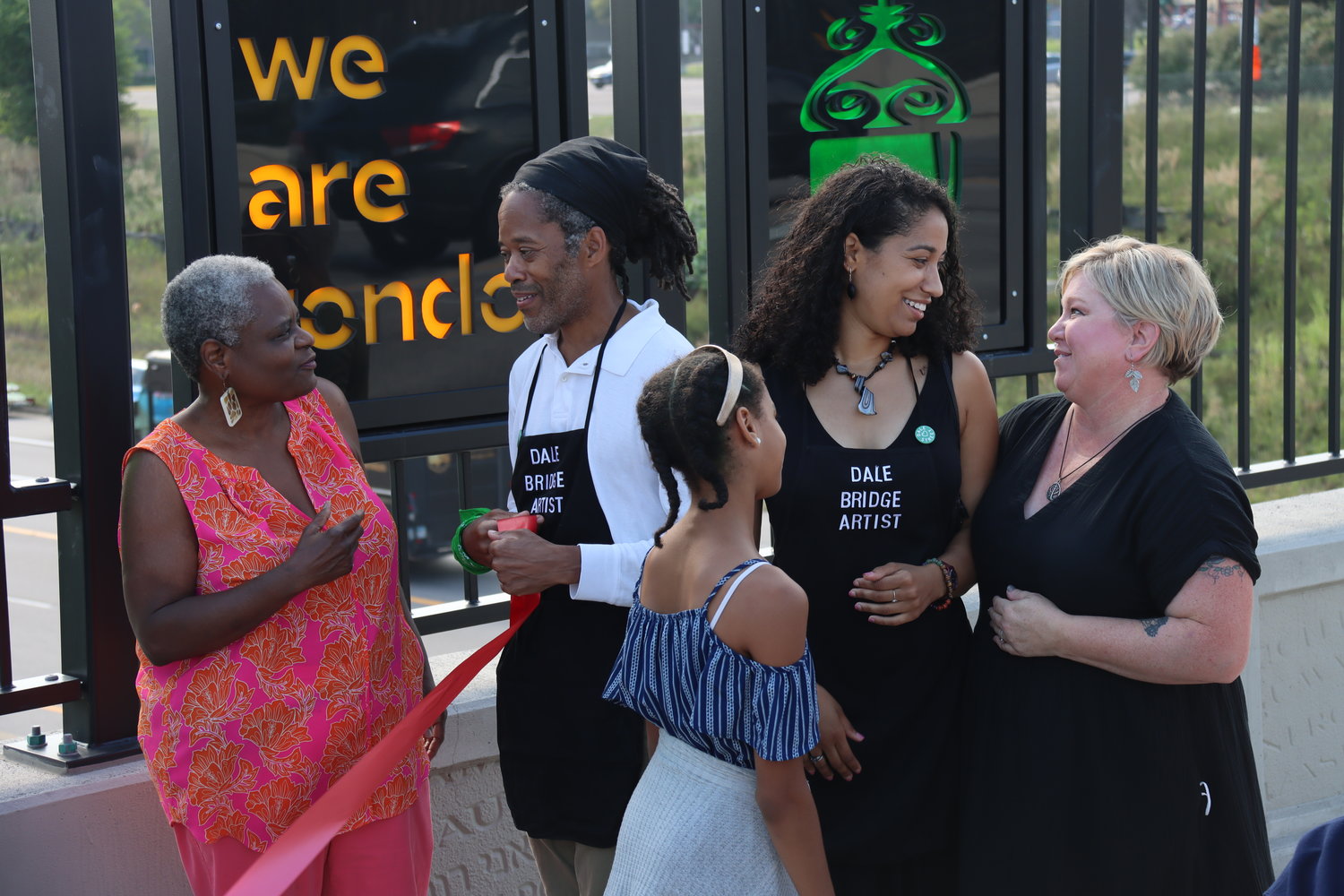 • Oak trees - Two metal oak trees designed by G.E. Patterson recall the canopy of oak trees that once lined the neighborhood. One branch is broken but still hanging on.

• Rondo Map - the abutment walls visible from I94 feature a Rondo map pattern.

• ‘I Am Rondo’ parapet wall - Text in 11 languages represents the neighborhood’s various ethnic communities, as well as the original Dakota name for the land, visible as you travel over the bridge. The text also includes ‘I am Rondeau” to reference the French Canadian explorer the neighborhood is named after.

• Poem - A poem etched in the sidewalk can be read from either direction. It is composed of statements people said about their neighborhood during the public engagement gatherings held at the start of the project.

• Rondo homes - Imprints represent homes destroyed during construction of I94 in the 1960s and puts them back on Dale Street.

now we are rondo

before we were acorns

and then you came

and then them again

and them become us now

* This poem is etched into the sidewalk on the new Dale Street bridge. The meaning changes depending on which side you start reading.

Features of the bridge

• Sidewalk barriers between the sidewalks and traffic lanes improve safety.

• Retaining wall at Dale St. and Condordia improve the function of the ball fields.

• New left-turn lane to eastbound I94

In her dream, a young girl was walking down Dale Street with her mother, who pushed a stroller. She was reading a poem on the sidewalk.
“Look, mama, you can read it both ways,” the girl said.
When Midway artist Hawona Sullivan Janzen woke up she knew the task ahead of her. She wrote a poem for the new Dale Street bridge that can be read from both directions. The meaning changes as you read the words from the north or from the south.
It’s one of the little surprises that rewards those who travel on the Dale Street bridge every day, according to Rondo artist Mica Lee Anders, who collaborated with Sullivan Janzen and G.E. Patterson on the artistic pieces that set the bridge apart.
The words of the poem came from what people wrote down when asked about their vision of the community.

A legacy project
Sullivan Janzen remembers trying to cross the Dale Street bridge with a baby in a stroller to get to the library. It felt so dangerous, she didn’t do it again.
That child, her son Nicholas, died in 2012, and this new bridge feels like part of his legacy, she said.
The $14.7 million project from University to Concordia included wider sidewalks and boulevards, sidewalk barriers, crosswalk bumpouts, improved lighting, and reconfigured through lanes and left turn lanes.
It also tells the stories of her ancestors who moved from the south to the north – and those who have since moved back to the south feeling discontented with the northern experience, according to Sullivan Janzen.
It is part of the legacy of Rondo, a neighborhood split by the construction of Interstate 94 in the 1960s.
The land, too, has its own story. “The poem in my mind was written from the perspective of the land,” said Sullivan Janzen.

Welcome
Welcome to St. Paul. Here is Rondo. The three artists who developed the artwork on the new Dale Street bridge wanted to let people know this is not just a place to drive through, explained Anders during a walking tour of the project area on Aug. 11, 2021. It starts with the big block lettering on the side of the new bridge visible from Interstate 94 that clearly labels this as Dale Street.
Anders thanked the engineers who embraced what they saw and made it real.
“This is who we are. Rondo is still here. Rondo is still happening,” said Anders.
Her 11-year-old daughter, Ruby, stated, “I think it’s really cool how they turned something really small and a little bit dirty into this beautiful We Are Rondo bridge.”
Two metal oak trees designed by Patterson stand at each entrance ramp. On each, there is one broken branch that is still hanging on.
“The freeway bent us, but did not break us,” said Sullivan Janzen.

A beacon
Green acrylic panels of acorns that look like stain glass are set in the bridge railings along with a yellow panel that says ‘We are Rondo.’
At the top of each acorn sits the West African Sankofa symbol.
“We look back to see where we’re going,” explained Anders.
“The old bridge you just drove across. You didn’t pay attention to it. It was just a bridge,” observed Taffy Jones, who has lived one block away from the Dale Street bridge for 40 years. The new bridge is a beacon. “When I’m driving, I know I’m coming home.”
She added, “Even if you don’t see Dale Street, you can see the acorns. It’s phenomenal.”
Taffy is a cousin to artists Seitu Jones and Mica Lee Anders, and gave feedback on the artwork along the way. Their grandparents’ house at 914 Fuller Ave. is one of the Rondo homes imprinted on the side of the new bridge. It’s still standing, but others shown there were destroyed during the construction of Interstate 94. “We put them back on Dale Street,” said Anders.
A map of Rondo lines the abutment walls on the sides of the bridge, visible when traveling on the interstate. “The scar of the highway went right through the middle of Rondo. We took the scar and make it a more beautiful symbol,” explained Anders. “It’s like a river running through the community.”
The 11 languages spoken in Rondo are engraved in the parapet wall, along with the original Dakota name for the land.
Scattered on the sidewalk are oak leaves in the pattern of Lindy Hop dance steps. It’s fun to follow, and is also a symbol of youth following in the “steps of the ancestors,” pointed out Anders.”The dance moves and history will flow right through them.”

More accessible
Sullivan Janzen’s dad, who is in a wheelchair, can now get up and across the bridge easier. The grade of the roadway has made it difficult for those in wheelchairs, who have trouble walking, or those pushing strollers. A switchback was added on the northeast side where an old Valvoline gas station once sat to improve access with a gentler slope.
The landscaping around the switchback remains to be done, and will likely include something to honor the artists.
“It’s a special honor to work here in Rondo,” observed artist Seitu Jones, who lives in the neighborhood as do many of his relatives. He mentored Anders, Sullivan Janzen and Patterson on this project through a partnership with Springboard for the Arts. “I’m happy to work with other artists to build their capacity.”

Different approach
for an infrastructure project
The work on this bridge showed how to approach infrastructure in a different way, S. Jones pointed out. “Infrastructure does not need to be just utilitarian,” he said. “It can also be inspiring and informing.”
“We can be proud of this bridge because it is one that we all got our hands in to design,” stated Mayor Melvin Carter, whose family is connected to the Rondo neighborhood. “Congratulations on our new bridge.”
This project marked a new way of engaging with the community. For the three artists working on the project, the job wasn’t just to create art. It was to connect with community members about the project.
Sullivan Janzen created black aprons with white lettering to let folks identify them as a Dale Bridge Artist. With many domestic workers throughout generations of her family, Sullivan Janzen wanted to recast how an apron is viewed. “I wanted to change the ideas in people’s minds that art is not work,” she explained.
The artists showed up in their aprons at community events, like Rondo Days and the opening of the Rondo Commemorative Plaza. When they gathered in the community room at the library, they brought food. They paired flyers with pastries, and partnered with Hallie Q Brown’s groups for elders as they worked to connect with people on the whole life cycle. They attended multiple National Night Out gatherings, arriving with an ice cream truck owned by a BIPOC family to reward those who shared their input on chalkboards and via Polaroid cameras with a sweet treat.
“We really wanted people to feel involved,” explained Sullivan Janzen. The work was paid through a grant from Blue Cross/Blue Shield that the Summit-University Planning Council received.
They asked people during that 18-month engagement period, “What do you do on Dale Street?” They heard: Go to my grandma’s house. Go to the library. Go to church.
They asked what people wanted their landscape to look like, and it helped them figure out what some of the elements were that stayed visible in people’s minds and were important to include in the bridge project. They told people to go to the site after the work was done and let them know if they got it right.
“It was a big responsibility,” stated Sullivan Janzen
After listening to people’s concerns about the construction project, they decided to do it in two halves so that there was always a way for people to get across during the construction in 2020 and 2021. Because of the pandemic, not as many people were driving to work and school, so “we were able to work faster,” observed Anders.

Not them versus us
“As you can tell from people’s comments and responses, the bridge spans more than just a physical space,” said Anders’ mother, Mary Anders Morris.
“I think it shows that the community and government can work together,” observed T. Jones. “It’s not them versus us all the time.”