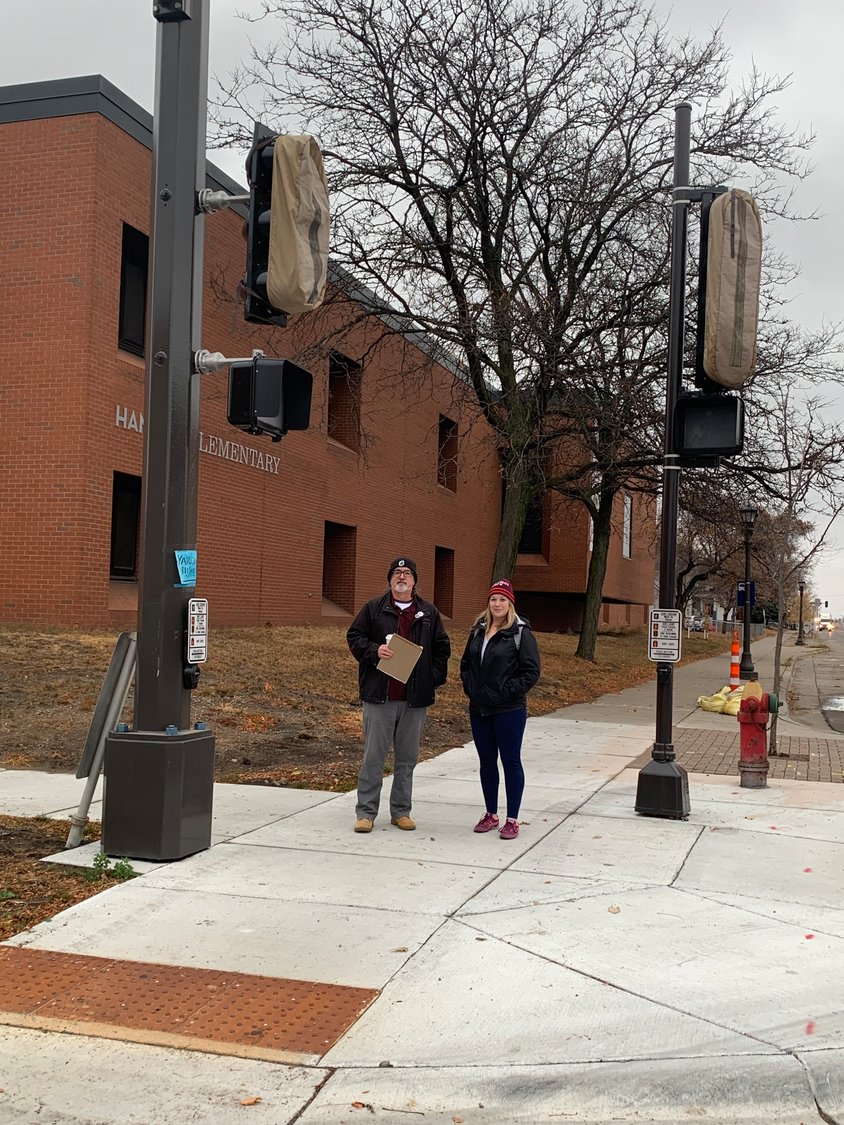 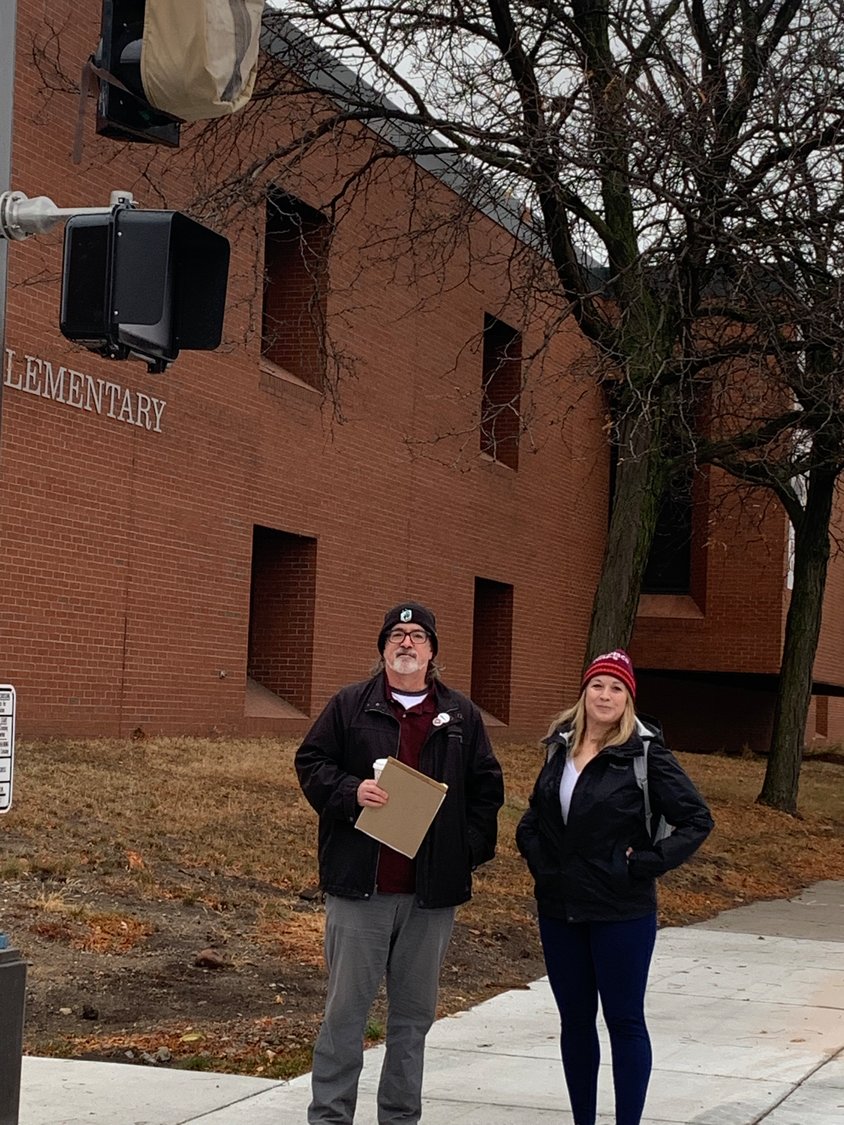 For decades, neighbors have been asking that something be done to make it safer to cross the street at Snelling and Englewood.
In October 2022, the city finally installed a stoplight.
“I had heard about this for so long, and I didn’t know anything was going to be happening this year,” said Hamline Midway Coalition (HMC) Transportation Committee member and Hamline professor Mike Reynolds. “I had just heard rumors that it ‘would’ happen. Then suddenly one day this summer, public works was at the corner and doing stuff. I texted [HMC Executive Director] Sarah O’Brien and [HMC board member] John Levin and said: Is this it?”
It was.
“I’ve been very excited as it’s come into place,” stated Mike Reynolds. “I talked with a group of new Hamline University students about the long issues, and how difficult yet rewarding it can be to try to fix what seems like a small problem – but emphasizing the ways the community can be empowered to make solutions happen. I have also been involved with Hamline Elementary in my role at HU, as we develop and keep refining the partnership between the schools. This summer, as Galtier closed and those families sought to learn more about Hamline Elementary, there was a lot of anxiety about walking across Snelling... and seeing the lights finally go in was a huge relief for a lot of folks.”

A COMMUNITY PROBLEM
With an elementary school on one side of Snelling and a university on the other, the intersection sees a lot of student foot traffic. The double-laned road makes crossing perilous, as one side of the traffic may stop but the other doesn’t. “This is compounded by really high speeds heading south over the bridge into Midway, but also as people speed up from the Snelling/Minnehaha intersection. Various interventions (the flashing speed sign; the planted medians; the pedestrian crossings; public art projects including the murals at SuperAmerica, at Mirror of Korea, and on Hamline Elementary, as well as a yarn project along the fence at the elementary school) never really reduced speeds or concerns,” said Reynolds.
“Without the stoplight, adults have to stand in the middle of the road, facing traffic, to ensure everyone stopped so the children can cross safely,” remarked Jessica Kopp, who serves on the St. Paul School Board.
Conversations about the safety at Snelling and Englewood go back at least to the 1990s, when a former sculptor at Hamline, Mike Price, made a rough design of a pedestrian bridge. Around 2004, HMC and Hamline University staff connected with MnDOT and the city of St. Paul to explore options but nothing was implemented. MnDOT did a major study of Snelling Avenue somewhere between 2008-2011, but again, there was a lot of discussion about improving pedestrian paths around schools and libraries, but nothing was done at Snelling and Englewood.
Kopp got involved in about 2017 when her daughter was attending Hamline Elementary School. One year, there was a safety walk when a designated person walked with a group of families and then neighbor and school board member Mary Vanderwert to both be visible to the community and show how difficult it was to safely cross Snelling Avenue. Kopp investigated applying for a planning grant through the Safe Routes to Schools program in 2018. She was part of a Stop For Me program in 2019.
Kopp revived the questions and conversations. Working with Ward 4 and with the neighborhood’s district council, Kopp and other community members reasserted the overarching need to enhance pedestrian safety at this intersection. What street-level changes might be possible at the intersection? These questions were brought to the City of Saint Paul’s Traffic Engineer, Saint Paul Department of Public Works – and they got some traction, according to Reynolds and current HMC Executive Director Sarah O’Brien. The city proposed some options to the Minnesota Department of Transportation (MnDOT). Then once again, neighborhood activists waited, through a comprehensive investigation and engineering study.
The city’s traffic engineer attended several Hamline Midway Coalition Transportation Committee meetings over a two-year period to discuss the intersection, the alternatives being considered, and the rationale behind selecting a traffic signal as the preferred treatment.
HMC worked with Ward 4 and local businesses on a North Snelling revitalization project in 2019. “I know that pedestrian safety and challenging traffic conditions were defined as key criteria for the challenges for increased development in properties along North Snelling,” said Reynolds. “I think that last conversation might have been the straw on the camel’s back, and got various parties to return to prior proposals and get it out of the ‘parking lot’ and into budget/planning.”
The process of getting this new stoplight was “sometimes a bit mysterious and a little slow, but overall, I think it’s pretty amazing how many people put their time, energy, and expertise into moving this along,” said Kopp. “Every time it felt like it was fading, someone else picked up the ball and ran with it. As a neighbor, I felt incredibly supported by then Councilmember Samantha Henningson and current Councilmember Mitra Jalali and HMC for taking the views of Hamline Elementary families seriously and gathering information from a variety of neighbors – and then convening the right people to find solutions. It gave me hope that there was, though long, a path for neighbors to be an important part of creating the community they want.”

CARRIED BY MANY HANDS
“It’s such a great story and so many people made this possible - many people in the Hamline Elementary community including parents Karen McCauley and Jen Power, the Ward 4 office, Hamline University, the City of St. Paul, and of course HMC - current and past executive directors, boards, and transportation committee members were all a part of this story,” said Kopp. “I’m probably forgetting someone because this project was carried by many hands.”
Kopp is now an employee at Hamline University and watched the progress on the light move ahead on her daily walk to work.
She said, “Seeing the actual stoplights was pretty surreal – never thought a bit of infrastructure could make me so happy.”