What’s it like growing up a Hmong immigrant in America?

What is it like to grow up a Hmong immigrant in America?

A celebrity refugee and Hmong American answered that question at Hamline University on Jan. 10, and his visit was so popular that the presentation was moved to the college’s largest auditorium, the Klas Center.

Neng Thao is an immigrant success story and is now sharing his life with thousands of online followers through his Neng Now channels.

Born in a refugee camp, Thao grew up in Wisconsin and earned a degree in regenerative biology from Harvard University. Two years out of college, he followed a calling to get out among the people and share his experience and knowledge. He began traveling around the world in December 2017. He shares his hopes and dreams with others through videos and Facebook posts. As of January, he had 38,000 Facebook followers.

“He comes with an important message that all of us can learn from,” stated Hamline President Fayneese Miller. 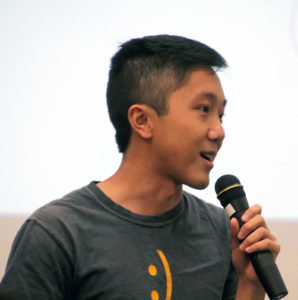 Photo left: Neng Thao of Neng Now, wearing his trademark smiley face shirt, speaks to a crowd at Hamline University on Jan. 10, 2019. Thao was born in a Thailand refugee camp, grew up in Wisconsin, and now travels around the world sharing his life with Facebook followers. (Photo by Tesha M. Christensen)

Thao’s talk, “Hybrid Cultural Identity: The Hmong-American mindset in mainstream America across first, second, and third generation Hmong Americans,” is part of a free series organized by the English Learners in the Mainstreet (ELM) Project at Hamline.

“These projects help everyone understand a culture and the importance of culture,” observed Miller, who is the university’s second female and the first African American president. “Difference makes us great. Difference allows us to do things we might not have imagined before.”

She added, “We still have a long ways to go, but this project is a step forward.”

Miller pointed out that one of the only top Hmong college leaders in the country, Mai Nhia Xiong-Chen, is employed at Hamline University. She grew up in Wisconsin and now works as Hamline’s Vice President of Enrollment.

“There are leaders among you,” Miller stated, acknowledging that Hmong immigrants have been in the United States for a relatively short period. “I hope you’re proud of all that you have accomplished. You have added so much to the fabric of this nation.”

Forty years ago, Hmong were sustenance farmers in Laos. Today they are world leaders and activists, pointed out Thao. “There’s not a time in history when we’ve seen any demographic do that.”

With that has come challenges—even between generations of Hmong families.

Thao’s grandfather was pulled into the Army at age 14 to fight against the communists. When they fled to a Thailand refugee camp, he somehow got a herd of pigs and made a living off them. Thao was born in that refugee camp, while some of his siblings were born in America.

Thao breaks down Hmong immigrants into three generations. The first, which include his grandparents, was born in Laos. The second includes his parents and himself, those who experienced refugee camps. The third was born in the United States.

“There are three very different demographics,” Thao observed, and understanding that is key to figuring out how to fit into American culture.

The problem is that each generation experienced a disconnect from the other. As he grew, Thao didn’t want to bother his parents, who were so busy trying to survive day to day that they didn’t necessarily have the time to share their language, stories, and culture with their children. During his travels, Thao has seen this pattern repeated in immigrant communities over and over.

“I think that intergenerational connections are the key to success,” Thao stated.

When they were in Laos, families worked together in the fields, and there was time to connect. “That’s when you just talked to your parents,” Thao said. “You felt safe and could talk to anybody about any problem.”

In the refugee camps of Thailand, families connected over their shared struggle to survive. The entire community connected through struggle, sharing when they had extra, and asking for help when they had nothing. “It’s that struggle that has made the Hmong community from Laos and Thailand so strong,” Thao remarked.

In America, the immigrants lost that common ground. Kids spent their days in schools instead of working alongside their parents. Many parents worked multiple jobs and left childcare of the younger kids in the hands of the older kids. Kids stopped talking to their parents and lost the mentorship former generations had experienced.

Thao realized on his first day of college that he had only one person he could go to and talk to. It wasn’t either one of his parents.

“I never believed there were people who genuinely wanted me to succeed and help me,” observed Thao.

Part of that he attributes to a contradiction inherent in the immigrant community. “As new immigrants we want our kids to succeed, but if their kid succeeds and ours don’t, it’s bad on us,” Thao said. He believes that part of this attitude sprang from the experience of genocide the Hmong experienced.

Thao has worked to establish a connection with his parents so that he can go to them, and it’s something that’s developing every day.

A place to belong

Where do I belong? It’s a question immigrants ask as they navigate between cultures, pointed out Thao.

“I just wanted a place where I could be myself and feel like I belonged,” stated Thao. As he travels around the world, he explores these topics in his Neng Now videos.

It was hard to consider asking for help within the Hmong community. “My grandparents got through the war and the refugee camps. How can I ask for help on my math test?” said Thao.

Thao believes the Hmong community is at a pivotal point. The first generation worked hard to survive. The second began picking up on cultural cues. It is the third generation with the skills and resources to succeed culturally and professionally.

“You don’t ask for help in the Hmong community,” Thao observed. “It wasn’t until I started to ask for help that I began to grow.”

• Apr. 18, 4:30-6pm, Working with Refugee Students who Have Experienced Trauma

All events take place in the Hamline University Center for Justice and Law, are free and open to the public