News for everyone, delivered to everyone
GUEST COLUMN

WHAT IS THAT THING? 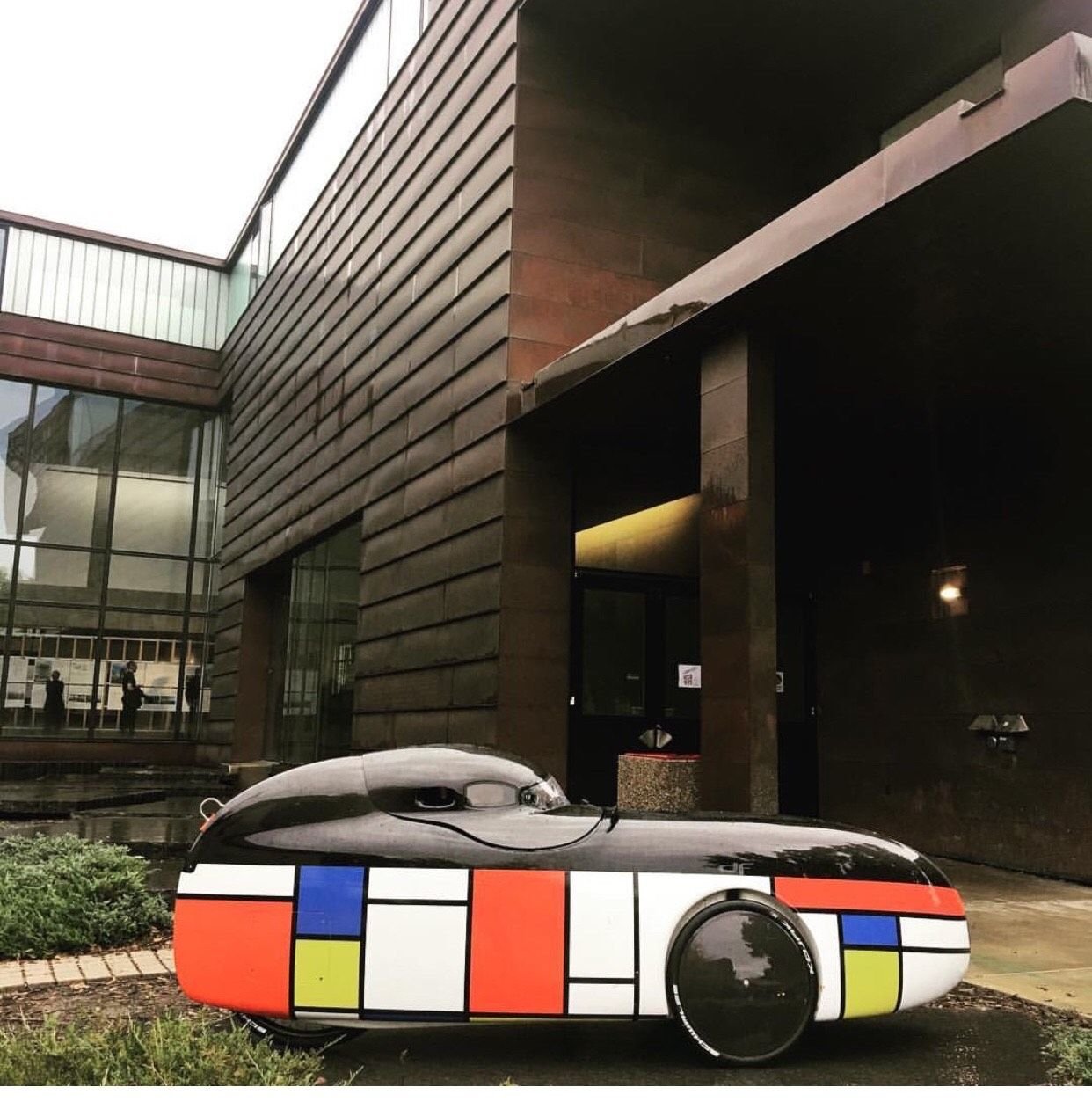 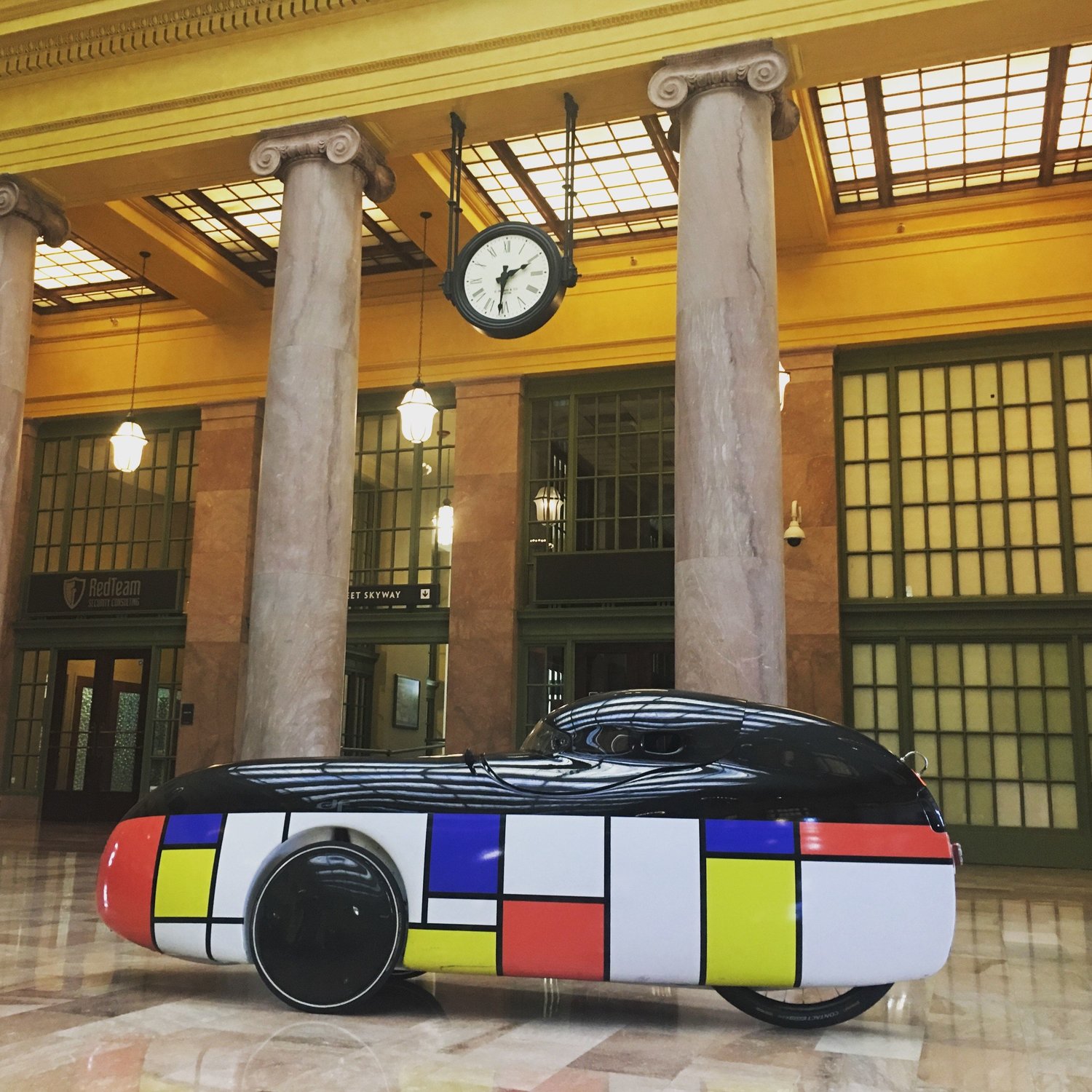 Don McCall estimates that he’s been asked that question more than 5,000 times since he bought his velomobile in 2017. The most memorable encounter was with the St. Paul Police, who pulled him over for riding west on Como Avenue, in what they assumed was a motorized vehicle without a license. As with most encounters, the cops ended up in a long discussion and a picture of Don’s startling method of transportation.
It’s hard to miss. The nine-foot, 60-pound velomobile imported from Holland is a three-wheeled bicycle called an HPV – human powered vehicle. Invented in the 1930s, the body is a hi-tech carbon fiber with an aerodynamic shape that allows Don to reach 25 miles/hour on a good day, on a flat surface. He chose to adorn the Dutch beauty with a Mondrian graphic – how appropriate!
So, what is a velomobile?
The simple answer is that it’s a recumbent bicycle with an aerodynamic cover, or, as in Don’s machine, the bicycle and carbon fiber shape is a unified, cleverly integrated system. Velomobile bodies are typically light, with a low center of mass that allows for superb handling, especially in cornering. Most velomobiles are narrow in front, with a pear-shaped body.
Aerodynamics is the most important element for human power. After roughly 20 MPH, a velomobile is faster than a bicycle. The velonaut (velomobile rider) will expend about one-third of the energy compared to a regular, upright bicycle rider.
The next question comes easily – how did Don McCall get interested in this – bicycle?
The answer goes way back. Don was born and raised in Minnesota. He attended Cretin High School and the U of M. Even as a child, he was fascinated by how things worked. “Managing speed through the air” might best describe his mind set. After high school, Don became a runner; he has finished 15 marathons. He has been an avid cyclist all his life.
His father worked for Northwest Airlines for 35 years as an aircraft mechanic, and Don followed in his footsteps, as he, too, acquired that certification. Don worked as a mechanical engineer for Aero Systems Engineering for 40 years. ASE is a unique firm that designs equipment to test aircraft engines.
Although the velomobile is Don’s most startling ride, he has owned five other unusual bikes, one of which is a 45-year-old Fuji, and another an old English three-speed.
When ebikes became available, Don was an early adopter. Most days he rides it to work; he has logged 7,000 miles so far. He also uses it for utilitarian errands and rides it all winter.
Is the velomobile as easy to ride as an upright bike?
Because of its aerodynamic body, Don says, flat surfaces ride similar to a recumbent bike, and downhills are a breeze. Hills are another story. Don opens the velomobile cover and shows me the “cockpit.”
“Hills are tough,” he says. On one side of the cockpit a quote says, “You will go up that hill and nothing else matters.” On the other side, “The secret to climbing is accepting the climb.”
Don retired Aug. 31, but his lifelong devotion to speed and aerodynamics won’t be behind him. Since he is also a licensed airframe and powerplant mechanic, he’s qualified to work on any kind of aircraft engine. He’s thinking of becoming a volunteer at the Commemorative Airforce and WWII Museum in South St. Paul, where WWI aircraft are maintained and flown.
Note: Don has just returned from a seven-week retirement adventure – cycling the 815-km ViaRhona route from the Mediterranean Sea to Geneva, two weeks of which were with his daughter.
Sonjie Johnson has lived in Como Park for 28 years. An avid nature-lover, she has run or walked Como Lake all of those years, and finds the park’s history unique and compelling. She also gardens, reads, and writes.