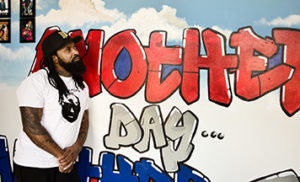 Stand out quote from the wall in the Reflection Room:
“Another day,
another chance.”[/caption] By MARGIE O’LOUGHLIN It’s no secret that the city of St. Paul has been hard hit by gun violence in the last several months, and that the victims have been disproportionately African American. Miki Lewis, an African American man who grew up in the Summit University neighborhood, felt called to do something about the violence. He started formulating a plan last summer, and opened the 8218/Truce Center on the northwest corner of Lexington and Selby avenues in December. He said, “This is a place where kids ages eight to 18 can come to learn, to relax, and to figure out how to settle their differences peacefully.” Understanding value of their own lives Walking through the door, visitors are welcomed into a room filled with African artifacts. Lewis explained, “Africa is where we came from, so it seems like the right place to start.” The 8218/Truce Center is both a space for conflict resolution and an African American museum. Lewis created the dual mission because he saw a multitude of needs going unmet for young people. The center offers classes in community awareness, conflict resolution, health and wellness, entrepreneurship, leadership, self-respect, depression, suicide prevention, and African American history. Lewis and his team of volunteers mentor African American youth in gaining more self-knowledge and understanding. Students earn a certificate of leadership when they complete all of the courses. Lewis said, “We teach them things they aren’t being taught in school.” Leaving the reception area, a visitor walks through a doorway over which a sign is posted, “For Colored Only,” a remnant from the Jim Crow era of segregation. Every inch of the African American Museum shows images of the African American experience – images that speak both to great struggles and to great accomplishments. Lewis said, “There is no substitute for our kids knowing the reality of who they are. We’ve got to help them understand the value of their own lives, and that starts with learning their history.” Space to be safe in Lewis was born just a few blocks away, on Hague and Milton. He said, “Gun violence always had its mark in this neighborhood, but it has gotten so much worse. I’ve been mentoring kids out in the community for more than 20 years, and I knew it was time to create a space where they could come and be safe. I feel like, if you don’t know who your neighbors are – it’s a lot easier to get in trouble. And there are just fewer places for kids to go these days. ” Youth come to the center to learn about themselves, and they also come to learn about each other. 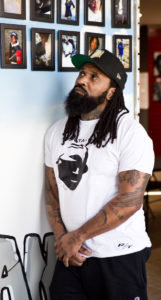 Miki Lewis is the founder and director of the 8218/Truce Center. He is shown standing in the Reflection Room, where photographs of more than 50 Minneapolis and St. Paul residents who died of gun violence or drug overdoses line the wall. He tells young people, “This is one wall I do not ever want to see your picture on.” (Photo by Margie O’Loughlin)[/caption] Reduce violence in community If there’s an argument happening out in the community, or bullying, or threats, Lewis and his volunteers can help. He said, “Because I’m from this neighborhood, I’m a known person. We’re here to help parties mediate their differences, and to get conflicts resolved safely. This is our effort to reduce community violence.” While the center is dedicated to mentoring African American youth, anyone is welcome and encouraged to take a tour. The 8218/Truce Center is located walking distance from several schools at 175 Lexington Ave. N. Hours are Monday-Saturday from 10 a.m.-8 p.m; call 651.340.4081. Visit www.8218trucecenter.org to learn more. ‘We’re in this life together’ Lewis is finalizing the details of getting non-profit status for the center. Since it opened, he has paid the bills himself. He said, “I believe we’re all put here to assist in saving the world. I can’t do it by myself, and neither can anyone else. We’re in this life together. If someone wants to make a donation to the center, they’re welcome to. But what would light me up more than anything would just be for people to come down to the center and learn some African American history.” As Lewis is fond of saying, “Just do what your heart allows you to do.”