The Circle of Peace story

Changing hearts, changing minds and changing lives over a meal in Rondo 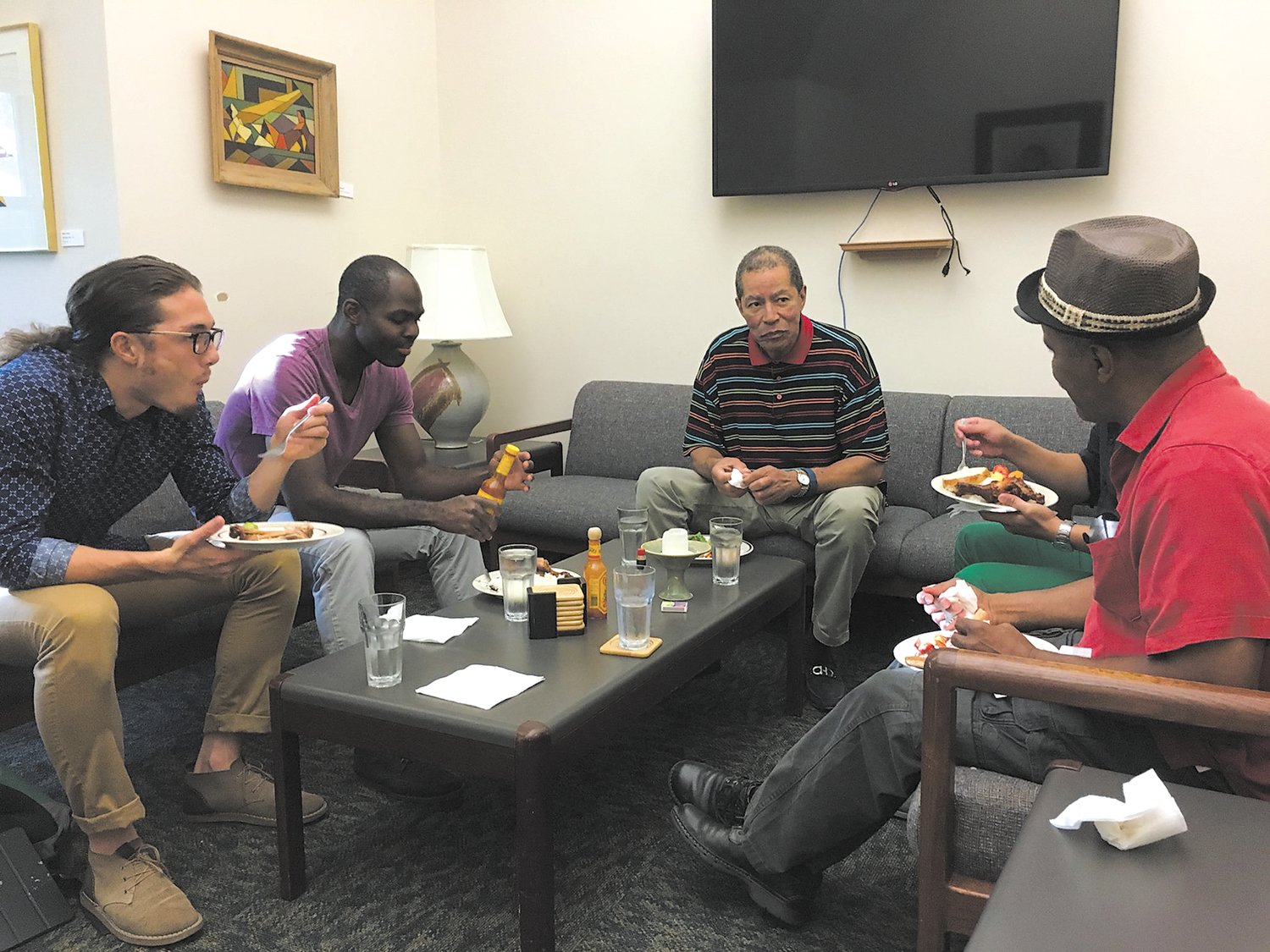 People find common ground when they come together over a meal and conversation, according to Russel Balenger, who leads The Circle of Peace gatherings in order to promote racial healing and stop violence. (Photo submitted) 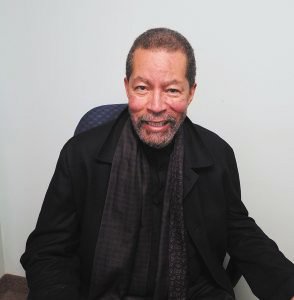 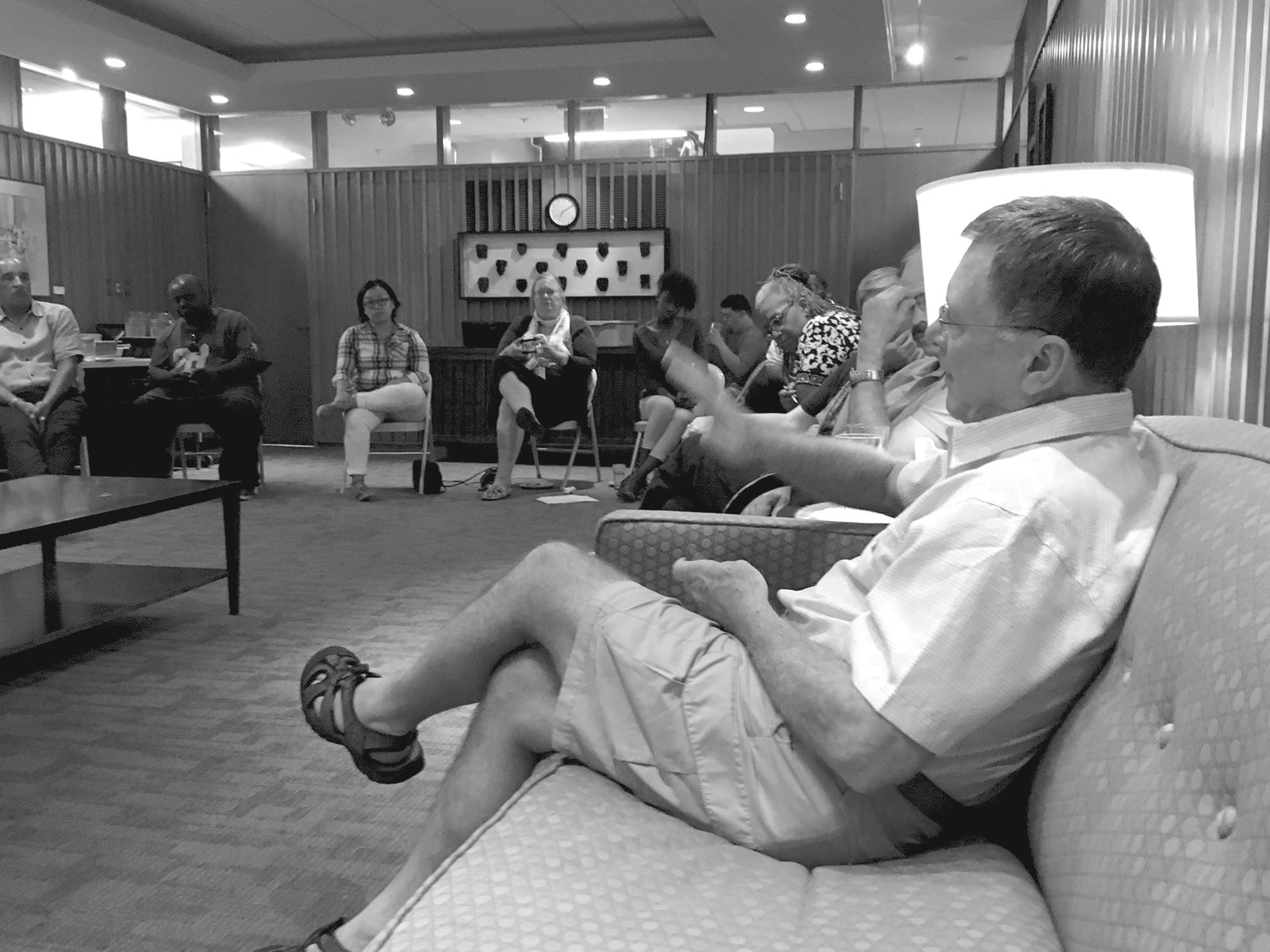 When they meet in person, attendees form a circle, putting everyone on an equal plane as they seek to understand and care for one another. (Photo submitted)
Previous Next
Posted Wednesday, March 10, 2021 8:30 pm
What is TCOPM

The Circle of Peace Movement is a pathway to racial healing and peaceful communities. It works by creating a safe space where people come together on a regular basis to share a meal and engage in respectful conversation. Through circle, we come to understand and care for one another, and find hope and strength to transform our communities.

It began as a conversation among neighbors.
Russel Balenger remembers when his sons were younger and in a row with a couple of families. “I went to the heads of the families and said we had to stop this right now, and we did. Years later, at my previous employment, I was in a board meeting and wanted to set up a conversation among gang members to stop the violence. My grandson had been shot twice, and so we were faced with it again, with the next generation,” he said.
Balenger had been leading restorative justice projects for some time, and he had a roadmap of what he needed to do. “I just didn’t know the players this time, and I had to go out and find them.”
He and his wife, Sarah, again asked neighbors and families of gang members to come together for a conversation. And The Circle of Peace Movement (TCOPM) was born.
“There were community members I knew on a personal level at that first group,” Balenger said. “We stood on a street corner and talked it out.” The participants agreed to meet four times, and they were able to find a meeting location at Unity Church-Unitarian on Holly Avenue.
“We started with a meal, meeting on Monday nights,” Balenger continued.
The first group had about 18 people attend. A conversation ensued, with the use of a talking stick or talking stone. Whoever held the stone or stick had the floor to talk, and no one could interrupt.
After the first four weeks, everyone wanted to continue, and TCOPM will celebrate its 11th anniversary in March. Between 25 and 30 people usually attend the weekly gatherings, and over 100 attended the 300th meeting. The group has now met over 500 times.
TCOPM sets its mission as stopping violence and promoting racial healing.
Last March, the group became virtual because of the church closing due to the pandemic. “I was not for it,” Balenger admitted, “but people said they wanted to meet through Zoom. It has been fantastic, and it was absolutely the right decision.”
TCOPM is now international, with groups in Sweden, Ghana, Ethiopia, Kenya and the Congo. Balenger said he has had conversations with people who are interested from New York, California and Georgia. The virtual meetings have also enabled people from other countries to join a Monday night gathering.
“The meetings are open to anyone, and it’s usually a mixed group,” Balenger noted.“Each week is a little different.” He said the group may include community leaders, business people and church leaders, someone who was recently incarcerated or has just gotten out of rehab. “One fellow mistakenly thought we were a narcotics anonymous group, but even when he found out we were not, he kept coming. He said it kept him off heroin.”

Common ground
“People find common ground,” observed Balenger. “It’s a safe space and courageous conversation. Some people’s lives get busy, and they may be gone for a while and then come back.” He said one of the attendees feels comfortable knowing that he can pass without commenting and does not need to speak until he feels ready to do so.
Regarding the policy of TCOPM to avoid discussing politics, Balenger said, “I think we’re more or less trying not to cut down somebody because of their politics. I think we’re really at a time where we can be more creative as human beings. I’ve come to understand race is a social construct.
“How do we live our lives without bringing up race?” asked Balenger. “There’s no such thing as race. There is racism, but not race. As creative human beings we should find ways of being descriptive of each other without saying the African American guy or the woman who looks Indian. If kids were describing someone, they would say the guy in the red jacket or the lady with the curly hair.”
Balenger said people have to learn to let go of racism.“They said people would never stop smoking, but they did. They said they would never wear seat belts, but they do.”

Vital connections
Without the ability to pass the talking stick to one another virtually, Balenger said he calls on people by name. As they join the meeting, he makes a list. “I kind of organize them, and I try to get the voice of a woman, then the voice of a man. There are also circles for men, for women and for youth.” Balenger goes out in the community whenever he is called and holds a circle or trains others to be circle keepers. He has led circle groups at St. Thomas and Hamline, and he would go to the prisons before COVID-19 hit.
“As people talk from their hearts, they talk about experiences that connect them,” Balenger stated.
Those connections are vital, according to Melvin Carter Jr., of Save our Sons, who considers himself a recovering policeman. “Russel and I had discussions about TCOPM from the beginning,” Carter said. “He got the vision and went out and did it. I think I had some input in the original conceptualizing. It snowballed from neighborhood gatherings and now draws people from all walks of life.”
Carter said young rookies and police officers attend. “Come to find out, we are all just people,” he said. “The deputy chief is perhaps the best example of a police official coming, sharing of himself, telling his stories and listening. Because things have been so intense in recent years, I think where we listen with intent to one another, we find there is an overspreading where we agree in many cases.” Carter said two common slogans are “Defund the police” and “Support the police.”
“There are reasons for both, and I’m straddling both sides,” he said. “To defund is not saying we don’t need first responders, and it’s not saying people should get away with murder. Listening to one another and seeking to understand helps. We come to understand why people believe what they believe, and why they do what they do. We need to overcome the us versus them mentality, and set the stage for promoting peace.”
A devoted attendee and supporter of TCOPM, Carter said he has shared the experience of what the meetings can do. “I know the city has used Russel’s method of communication with roundtable discussions to negotiate terms on policing in St. Paul. That’s a valuable tool that gives the St. Paul Police Department credibility and puts them miles and miles ahead of any police department in the world. And part of that is Russel’s doing.”

It has widened her perspective
Ellen Green has been around TCOPM since its beginning, as a member of Unity Church-Unitarian. Before the pandemic, Green said she helped Sarah Balenger cook and prepare a meal for the group every week. Green said some circles have started in other areas of the Metro, such as the Battle Creek School area and at city meetings, where she said that changes were being made in what happens when a complaint is made to the police. “Anyone could come and contribute, and it made the complaint process better,” she said. Green said that when Totem Town was operating, the boys there would pile in a van and come to Unity Church for a Circle of Peace meeting. “After more trust was built up, city cops were assigned to come and be part of the circle, too.”
Green commented that a wide variety of people attend the Monday night meetings, including judges and social workers “Everyone is there by self-selection,” she said. She said TCOPM has widened her perspective. “It’s a chance to hear, and hear well, because only one person speaks at a time, and you don’t feel the need to jump in.”
When individuals come to a meeting, they are invited to come back three or four times, according to Green. “That’s in case they come on an off night. And most do come back. The challenge is coming the first time,” she said. “People of different races are sitting down for the first time, and it’s scary because it’s different. Maybe no one will say hello to me. Maybe I’ll say the wrong thing. For me, I think the real value is being with people I would not have been with otherwise, and being friends with them.”
Green said that through a grant, Balenger was able to start a Walk in the Park. Youth can take a walk with a mentor, and other members of their family can join the walk. Hiking boots and appropriate clothing are available, if needed.
Unity Church, which has partnered with TCOPM in its mission, provides the meeting space and collections from its members. “Unity Church has been a wonderful partner, with wonderful people committed to work and social justice,” said Balenger. “It has been a perfect fit. Rob and Janne Eller-Isaacs, the co-ministers, and their whole congregation have been so supportive.”
Balenger said that people usually hear about TCOPM by word of mouth. Reflecting on the meetings, he said “I” statements and not “You” statements are used. “Everyone is not always happy, and sometimes we shed a tear,” he said. “But we agree to be respectful of each other, and everyone in the circle is equal.”
Learn more at https://tcopm.org or email russel@tcopm.org.