Save Historic St. Andrew’s holds forum to update community on ideas and plans to save the building 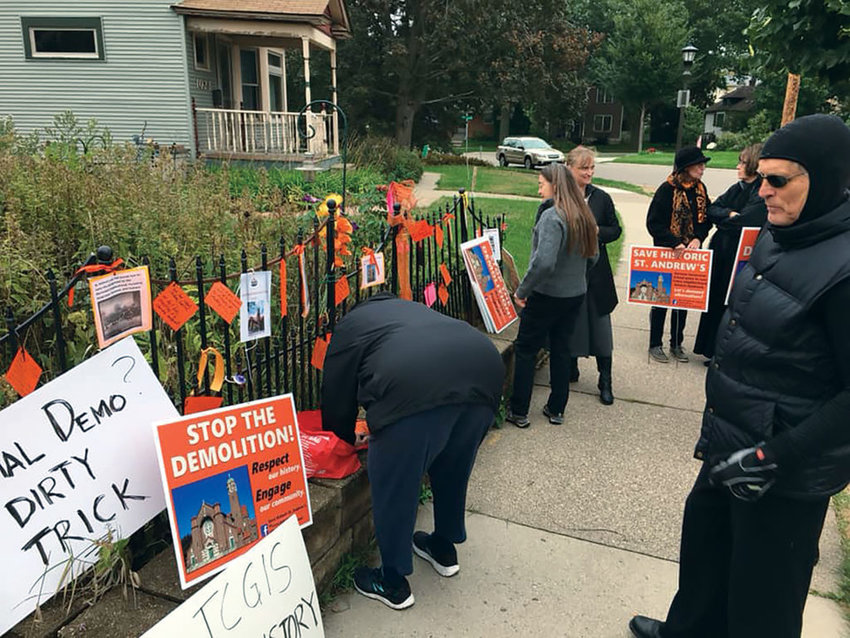 In October, partial demolition for St. Andrew’s historic church was slated by property owner Twin Cities German Immersion School (TCGIS), but the plan was taken off the table after intense discussions with the Save Historic St. Andrew’s community group.

A forum to increase community awareness was held later that day on Thur., Oct. 11, and was attended by about 100 people. The event was held at the Mission Church across the street from historic St. Andrew’s (now called the Aula by TCGIS) but was not endorsed by the church.

‘No one imagined it would be threatened’

Save Historic Saint Andrew’s (SHSA) member Roy Neal was the first speaker of the evening and pointed out that his wife attended school at St. Andrew’s.

“Quite frankly, no one ever imagined that the Aula would be threatened with demolition,” Neal said.

He explained that the first goal of SHSA is to stop the demolition of the church, which the school voted to do on July 30 and replace the structure with a new, three-story building.

“What we’re asking for is collaboration,” stated Neal. “We want to see if we can come up with a win-win situation.”

According to Neal, the building is important to group members who feel that history matters. During the last 100 years, St. Andrew’s “has been the heart of the community in many ways,” he said. “It feels unthinkable to remove that from the community.” 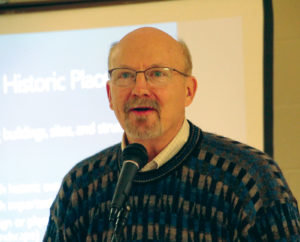 Photo right: St. Andrew’s is significant for a number of reasons, according to architectural historian Rolf Anderson. The architect, Charles Hausler, is known for his high-quality designs and diversity of styles which had an important impact on the city. St. Andrew’s is also significant for its association with the “Hungarian immigrant experience. The broader impact of the church was demonstrated by the five new congregations that were created from the area served by St. Andrew’s Church,” wrote Anderson in his preliminary findings. (Photo by Tesha M. Christensen)

He stressed that engagement matters and that SHSA hopes to engage the school to work together around a goal.

Neal observed that SHSA was concerned that the school planned to begin partial demolition of the church building just before the review of the structure by the Historic Preservation Commission, and finish the demolition in the summer of 2019. “We’ve seen that pattern before,” Neal said. He pointed out that partial demolition is a tactic used to deface a structure enough to undermine historical recognition and spite opposition.

SHSA members met with school staff, and TCGIS agreed to hold off and complete a full demolition next June as originally planned, he reported to applause in the room. “We think this will restore trust,” said Neal.

Community members learned in March 2018 that the school had been investigating options to increase their space for the past four years, and might destroy the Aula and build a new building in its place. In May, the school board held off on a vote to move forward with demolishing the former church sanctuary to investigate the purchase of the Central Lutheran School site nearby. In July, the school board voted to move forward with building a new structure.

However, the plan replaces the irreplaceable, he explained.

“We hope they can see themselves as a steward of the facility rather than a destroyer,” Neal said. 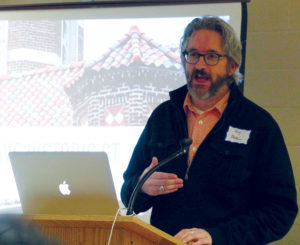 Photo left: Save Historic St. Andrews member Roy Neal observed that SHSA was concerned that the school planned to begin partial demolition of the church building just before the review of the structure by the Historic Preservation Commission, and finish the demolition in the summer of 2019. SHSA members met with school staff, and TCGIS agreed to hold off and complete a full demolition next June as originally planned, he reported to applause in the room. “We think this will restore trust,” said Neal. (Photo by Tesha M. Christensen)

Neal recognizes that the school intends to build an energy efficient structure, but pointed out, “It can take 80 years for a new energy-efficient building to overcome the impact created by its construction. The greenest building is the one that is already built.” According to the Minnesota Pollution Control Agency, 80 percent of Minnesota’s 1.6 tons of construction and demo waste ended up in a landfill in 2013.

Neal observed that the estimates for work on the existing building that were obtained by SHSA are significantly less than the ones shared by the school board’s building committee, and pointed out that the exterior is in good condition. According to SHSA, before the school took over the building, it cost $10,000 to maintain the roof each year, $2,500 to repair the brick and exterior, and about $4,000 to remove snow. “This doesn’t sound like a big burden to me,” said Neal. TCGIS has estimated building repairs and upgrades at $1.2 million.

SHSA is also concerned that TCGIS will outgrow the site and move to a larger space. “If they move, the consequences of this demolition won’t matter to TCGIS,” said Neal. “The neighborhood will have to live with the consequences.”

Neal encouraged school representatives not to be afraid of a historic preservation status. While there may be an extra step while doing projects, “it doesn’t stop respectful remodeling,” he said. “Preserving the building will be good for resale. Usually, preservation increases value. Historic properties bring value to the entire neighborhood.”

A Go Fund Me campaign by SHSA raised money to fund a study of the former church building aimed at determining the building’s potential eligibility for historic preservation status.

Architectural historian Rolf Anderson pointed out that the church was built in a distinctive Romanesque Revival style inspired by churches in south France and Italy.

“The building is very complex and well-designed,” stated Anderson, “and among St. Paul’s most impressive neighborhood churches.”

He pointed out that there are seven distinct types of brickwork in the building. “It’s quite amazing just to look at the brickwork,” Anderson said.

The structure was designed by well-known architect Charles Hausler, who was St. Paul’s first city architect. He is known for his high-quality designs and diversity of styles which had an important impact on the city, stated Anderson.

St. Andrew’s is also significant for its association with the “Hungarian immigrant experience. The broader impact of the church was demonstrated by the five new congregations that were created from the area served by St. Andrew’s Church,” wrote Anderson in his preliminary findings.

The District 10 Land Use Committee (composed of the community members who attend the meetings) and Board will also be voting for or against the TCGIS demolition and any variance requests before they are forwarded to the city council for consideration.

U OF M architect’s ideas

Minnesota Design Center Director Tom Fisher of the University of Minnesota reiterated that the greenest building is reusing the buildings one already has rather than tearing them down.

He pointed out that the TCGIS design for its new facility would replace the entrance of the church with the tall, blank wall of a gymnasium facing the street.

“They are turning their back on the neighborhood,” stated Fisher.

In his work, he looks for win-win solutions, and offered several suggestions at this site. Fisher began by asking what the school is trying to achieve and then trying to figure out how the school and community can both accomplish their goals.

He remarked that although the charter school views the old sanctuary as a challenge or deficit, it could instead be viewed as a desirable asset. He pointed out that schools today are moving from standard classrooms to large flexible spaces like this.

“The nave of the church is the kind of educational space a lot of schools are trying to build,” stated Fisher.

The Emily Program nearby recently kept a church building and dramatically changed the interior to meet their program needs.

He stated that charter schools still need to “be connected to and responsive to the community.”

Fisher suggested that TCGIS consider building an addition where the existing parking lot is, and observed that the coming autonomous vehicles will reduce the need for parking, a concept the design center is studying courtesy of a National Science Foundation Grant. Or, TCGIS could add another floor to the existing school wing.

“I think there’s a real opportunity here,” stated Fisher. “There are other options for you to meet your needs and still keep the church,” he told school representatives when he met with them. “I think there are ways to add to the facility without downsizing the church.”

While the community group Save Historic St. Andrew’s is working to save the former church building, the charter school that occupies it is mobilizing against a historic designation.

In his letter to the commission, TCGIS Executive Director Ted Anderson pointed out, “The school is a model for successful charter schools in both cities.”

He added, “The non-profit school’s future is at stake if it is to be forced into maintaining an old building that is falling apart and is functionally obsolete.”

Anderson stated that TCGIS opposes the petition to designate the building as a historic site for a number of reason.

In three sample letters sent out during the email blast, TCGIS supporters were urged to ask the Historic Preservation Commission to avoid giving “a crumbling former church building, owned by the Twin Cities German Immersion School, an historic designation that will put an unrealistic financial burden on this public charter school.”

The letters referred to it as a “short-sighted petition” that is “being presented by a small, vocal and selfish minority of neighbors.”

The letters TCGIS school supporters were asked to send to the commission also stated: “The petition to designate the property as an historic structure is selfish—and self-serving—and is taking money away from kids in a successful school environment: Every dollar the school spends on opposing the petition, or on complying with historic designation requirements, is a dollar that is taken away from the kids the school is entrusted with educating.”