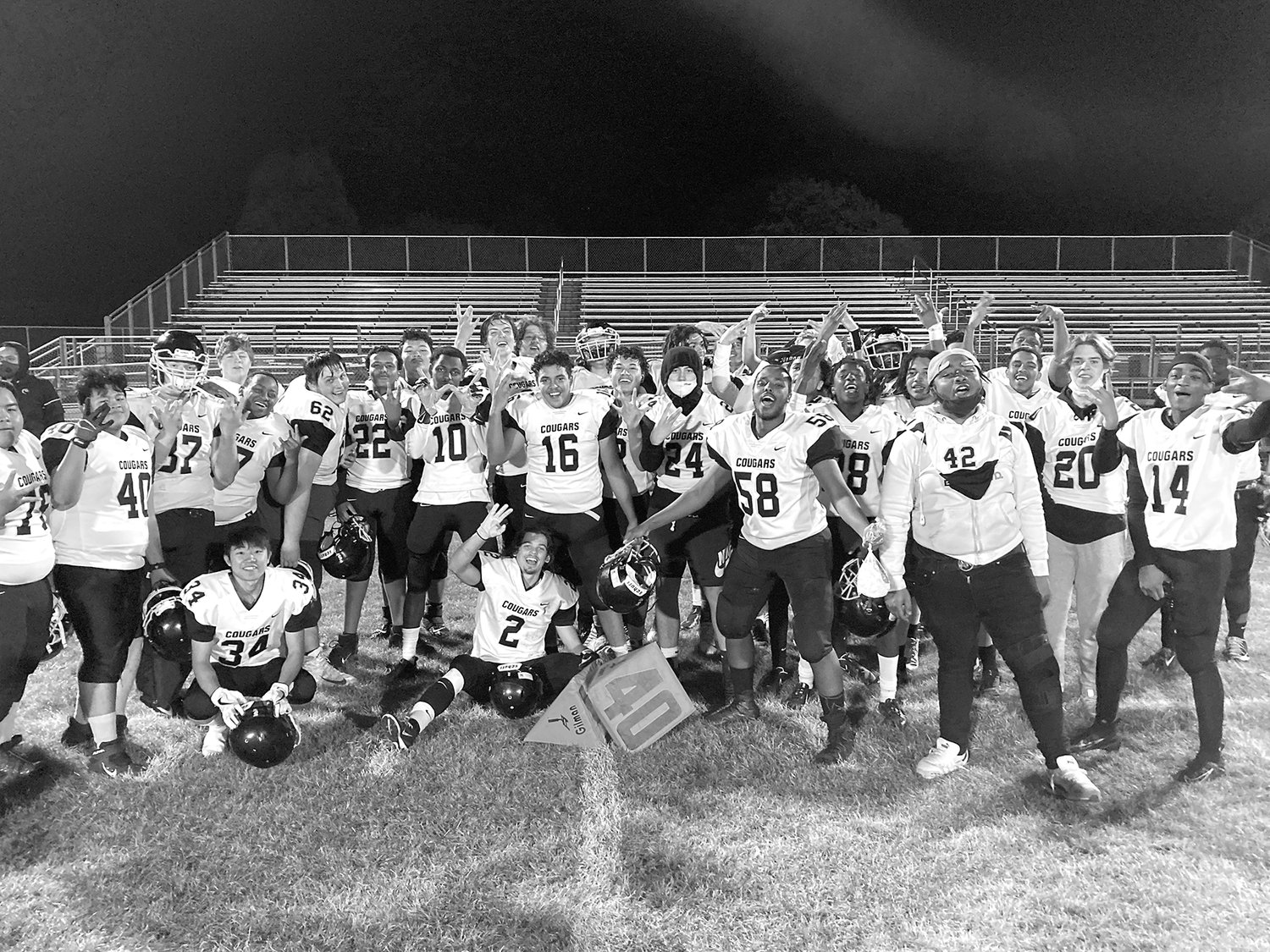 The Como Park Cougars celebrated their season-opening “W” against Highland Park. Como had a record of 3 wins and 0 losses as the Monitor went to press. (Photo submitted by Eric Erickson)
Posted Wednesday, November 11, 2020 10:03 pm
by Eric Erickson Social studies teacher

Distance learning has entered its third month of the 2020-2021 school year. St. Paul Public Schools announced that high schools will continue with the format until at least January.
One of many challenges for students during distance learning is finding safe and healthy outlets for their energy. The high school experience with daily face-to-face interaction and traditional routines and rituals is impossible to replicate from iPads at home.
Homecoming season has come and gone. The void was felt within the student body and the school community. Despite the pandemic’s cancellation of long-anticipated events, many Como students are taking advantage of the altered opportunities that are still available.
Como’s student council created “Virtual Spirit Week” for the last week of October. Thematic dress-up days, photo contests and activities such as the selection of a homecoming court were all components to help create connection.
Royalty court representatives included seniors Mabur Bility, Lilly Klett and Claire Olson, juniors Saylor Landrum and Raven Florez-Reese, sophomores Selena Paul and Thay Ler See, freshmen Kyle Kosiak and Krisha Rama.

Como’s debate team has been active with participation in several meets via a virtual format. All of the team’s practice sessions are also virtual. The Como debaters include students ranging from the novice division, to junior varsity and varsity levels.
Notable finishes and awards have been earned by Sam Skinner, Chikamso Chijioke, Caitlyn Coyle and Allie Rognerud.

Sports during COVID-19
With precautions, protocol and monitoring, fall sports that started in August successfully completed their seasons. Football and volleyball started later but are in the middle of their abbreviated seasons.
While student athletes and coaches know things can change in an instant, they are embracing every day they get to be practicing and playing with their teams. The physical activity and release from screen time is a rejuvenating element after each school day.
Both the girls’ and boys’ cross-country running teams had solid seasons with third place finishes in the St. Paul City Conference. Senior Justine Wulff was the top runner for the Como girls and earned all-conference.
Sophomore Charlie Power-Theisen was not only the Cougars’ fastest runner, but also the individual champion for the conference. He also finished in the top ten at the Section 4AA Meet and qualified for a state invitational. Senior Shakur Bati was also all-conference and qualified for the state event.
The Cougars football team began the season with a significant win over a traditionally tough Highland Park squad. They followed that up with an overtime upset of Johnson, and a convincing shutout over Humboldt. The 3-0 start has been a joyful surprise after a challenging 1-8 season in 2019.
Several returning starters on both sides of the ball who committed to off-season improvement have made the turnaround possible. Seniors Sully Lucy, Kaelyb Sears, Jahrese Adeagbo start on both offense and defense, as does junior Aaron Adekplovi.