Option A for the Hamline-Midway library 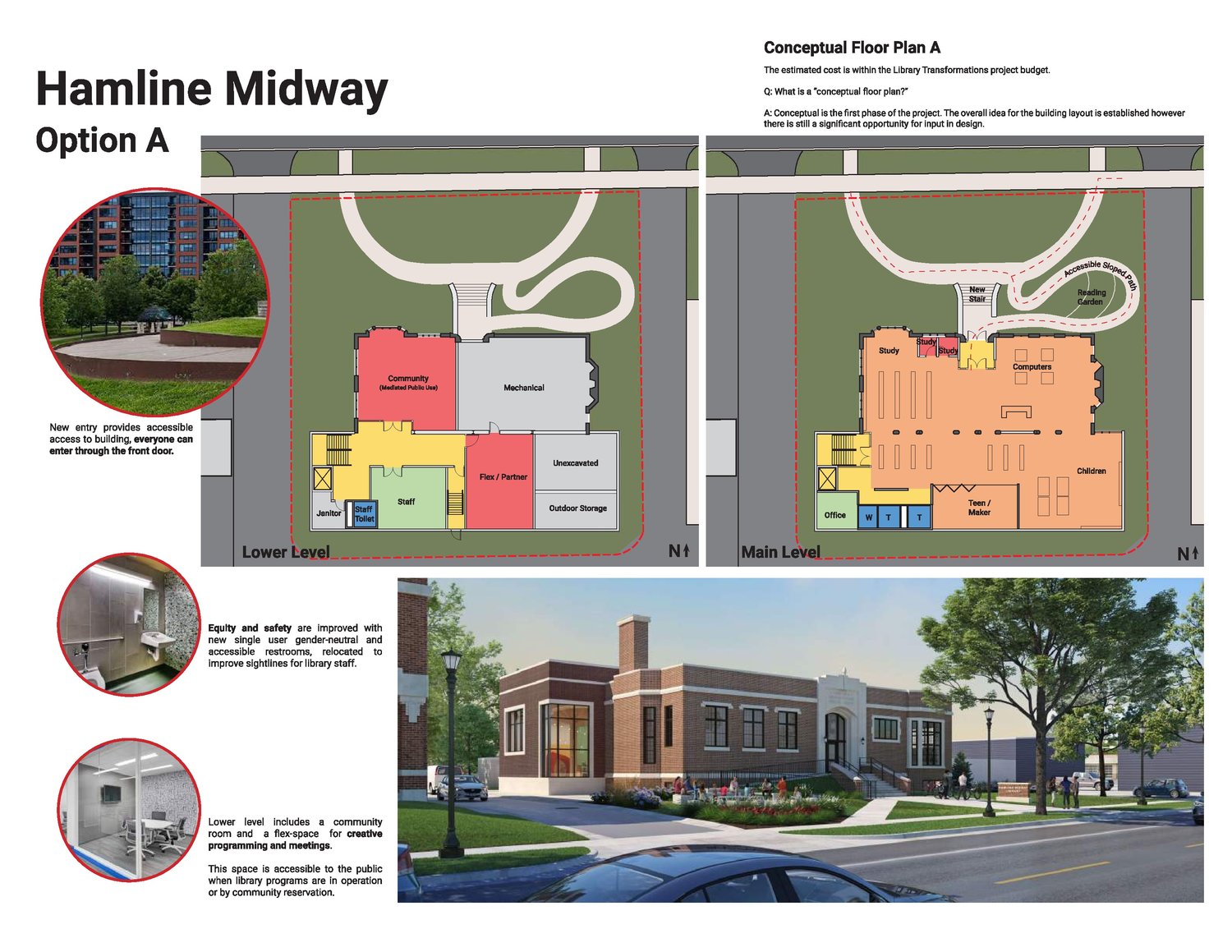 Option A for the Hamline-Midway library
Previous Next
Posted Wednesday, May 11, 2022 9:46 am
By Barbara Bezat, Tom Goldstein, Jackie Lannin, Roy Neal, Jonathan Oppenheimer and Bonnie Youngquist

Two weeks ago our community learned that St. Paul Public Library (SPPL) is considering two options regarding the future of the Hamline Midway Library: a renovation and expansion design that SPPL is calling Option A; or a demolition and new build termed Option B.
As neighbors, longtime library users, activists, and preservationists who believe that retaining history while embracing the future are key elements to a successful library upgrade, Renovate 1558 is grateful that LSE Architects has brought forward a creatively-designed expansion – Option A –that we believe can unite our neighborhood moving forward.
Our support for Option A takes into consideration the guidelines on preservation and sustainability laid out in the city of St. Paul’s comprehensive plan and our district council’s neighborhood plan. Given that the release of embodied carbon which results during the demolition of historic buildings – such as the 91-year-old Henry Hale Memorial Library – is particularly detrimental to the environment, it is imperative that city officials respect the science on greenhouse gases and wherever possible choose preservation.
As noted by Carl Elefante, former president of the American Institute of Architects: “The greenest building is one that is already built.” In the case of our library, preservation and expansion of the historic library building is both the greenest and most environmentally-sound choice.
While we would have preferred more time for the public to be engaged about different options for the library and a process that embraced all the potential solutions – including the possibility of repurposing the current building and relocating a new library elsewhere – we now have the chance for a win-win outcome by rallying around the choice that both preserves and expands the existing library.
Preserving an iconic building that has helped anchor the surrounding community for the past 90 years is integral to maintaining the historic character of the Hamline Midway neighborhood. Public buildings, like the Hamline Midway Library, belong to the community, and demolition should never be on the table simply because a building in otherwise good condition has been neglected and is in need of repairs and upgrades. A thoughtful renovation and expansion will not only allow equity and access to be properly addressed, it will also enable future programming to meet the needs of historically-marginalized communities.
Renovate 1558 remains committed to doing what’s best for our neighborhood, and we believe that there is widespread support for Option A. Over the past year a majority of community members far and wide have spoken up in favor of renovation, as evidenced by the results of a city-led CIB survey in spring 2021, public comments to the CIB board, more than 2,000 people signing Change.org petitions to save the library from demolition, our own survey results from an April 19 community forum, and countless people in the neighborhood displaying our yard signs.
We urge SPPL to recognize Option A as the best choice for uniting rather than dividing the neighborhood, and look forward to working together with all interested parties to reimagine and preserve the Hamline Midway Library.
The authors of this op-ed are members of the group Renovate 1558, which is committed to reimagining the Hamline Midway Library building through renovation and expansion or repurposing. You can learn more at renovate1558.org