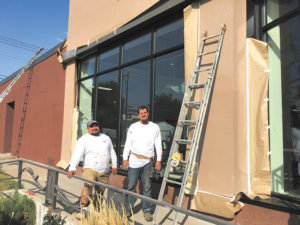 Tony Espinoza (left) and Raisy Hennenos of Five Star Painting work to repaint the exterior of Furniture Barn along University Ave. on Tuesday, Sept. 22. The business, which was damaged in the civil unrest in late May, also received new windows that day. (Photo by Tesha M. Christensen)

The damage in the Midway during the civil unrest in late May 2020 was expected and unexpected, according to St. Paul Fire Safety Manager Angie Wiese.

“We knew it was coming but not what form it would take,” said Wiese during a tour of damaged buildings organized by the Midway Chamber of Commerce on Tuesday, Sept. 22.

In the days following, city staff conducted assessments at 334 properties. Of those 14 were deemed unsafe, and 14 placed under restricted use.

“I would say that the most impressive thing is how the community showed up,” said Wiese. “It was like going to a festival in St. Paul, but there was no festival. Everyone had a broom and dustpan. Sandwiches. Bottled water. It was a little hard to get around.”

While Lloyd’s Pharmacy and the building housing Bole Ethiopian Cuisine, Napa and Subway were destroyed by fire, the Big Top Liquor store was questionable. It was not demolished but the Sports Dome across the street came down on day one, observed Wiese.

From the outside, the Midway Center only seemed to be damaged where the fire was in the Footlocker and ?salon, but the smoke and water damaged much more of the facility. Eleven tenants of the Midway Center were affected and need to find new locations for their businesses as the property owner doesn’t plan to repair the existing building.

Complicating the assessment process is that the city staff don’t necessarily know what businesses were operating during Covid-19 and what were closed.

Some businesses still have plywood on their windows. This is because it can be hard to get new glass given the high demand in the country, and also that they don’t want to take down the murals they have up.

“We want to be very intentional with how we address the plywood,” stated Wiese.

As businesses decide whether to reopen or not after the unrest, insurance plays a huge role, noted Wiese. “We try to be supportive to each business no matter what path they choose,” she said. If a business wants to expand or change their business model, they need to get new permits and approvals, which can delay their reopening.

“There is progress. It might not be as quickly as we’d like to see,” stated Wiese. “We’re trying to be patient.”